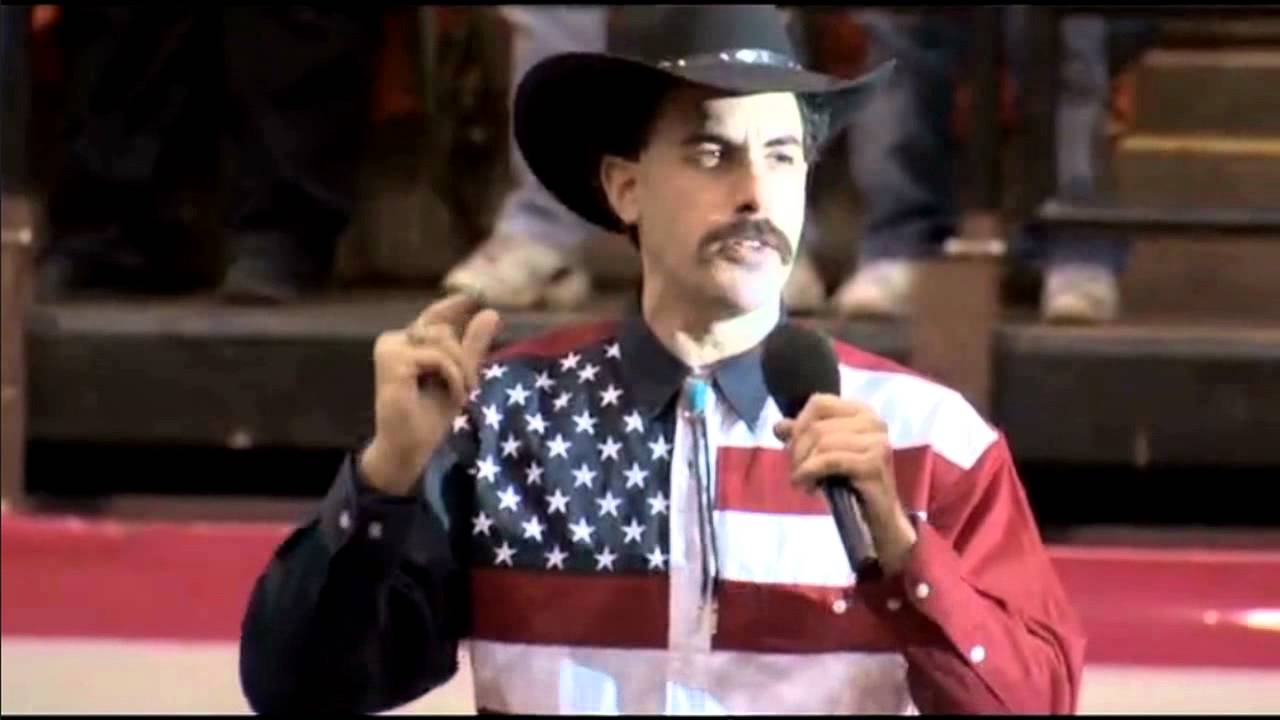 As Australia braces itself for the next episode of Sacha Baron Cohen’s Who Is America? to stream on Stan, what better time is there to look back at some of the most outrageous stunts that the British comedian has become famous for.

Whether disguised as Ali G, Borat, Brüno or his new characters, Baron Cohen pushes boundaries that many are afraid to cross. And here’s how.

The show has only just begun and already one stunt in Who Is America? is causing a furore.

Disguised as Erran Morad, an Israeli anti-terror expert and self-proclaimed terrorist terminator, he persuades pro-gun lobby US congressman to promote “Kinder Guardians”, a new scheme to train three-year-old kids in armed combat and using firearms, including “Uzi-corn”, the gun for girls.

In less than a month a first grader can become a first grenadier. The idea is so over-the-top, it’s alarming how easily Baron Cohen’s “victims” fall into line. Happy shooting, kids!

Nothing irks the Americans more than a badly sung National Anthem, just ask Fergie, so when Baron Cohen, in full Borat mode, stood in front of a baying rodeo crowd, it was never going to end well.

After whipping the redneck hoards into a frenzy with outrageous pro-American, anti-Iraq proclamations he sings the Kazakhstan national anthem to the tune of the Star Spangled Banner. It does not go down well.

To add insult to injury, when Mariya Dmitriyenko won the gold medal in the 75 target event at the 10th Arab Shooting Championship in Kuwait, Baron Cohen’s fake Kazakhstan anthem was played, all together now… “Kazakhstan’s prostitutes cleanest in the region. Except of course Turkmenistan’s.”

Back when the idea that Donald Trump would be the US president was some kind of sick joke, Staines’ most famous son Ali G interviewed the gauche entrepreneur about the history of business.

As the oblivious New Yorker became more uncomfortable with the interview , the “Berkshire Massif” member pitched his brilliant invention, “Me idea is to come out with these ice cream gloves that make the ice cream not go on your hands and make it all well sticky — and also keep your hands warm if you were eating the ice cream.”

And Trump left the building.

The Dictator Vs Ryan Seacrest

The dictator of the fictional Republic of Wadiya, wearing Kmart socks and carrying the ashes of his favourite tennis doubles partner, Kim Jong-Il, was interviewed in character and managed to up end the urn pouring the contents over a bewildered Seacrest.

“It was his dream to come to the Oscars and be sprinkled over the red carpet and over Halle Berry’s chest again!”

The down-on-his-luck faux Austrian gay fashionista stepped into the ring during “Straight Dave’s Man Slammin’ Maxout” in front of a 2000 strong Arkansas crowd to prove his manhood.

What he does is incite a riot as the oblivious redneck audience, unaware they are watching a staged wrestling bout, witness the fashion icon get back together with his boyfriend.

When Brüno’s lover Lutz steps into the cage, the pair fight and the crowd love it. Then passion overcomes and the pair kiss. The frenzied audience turned into an angry mob and chairs began to fly.

When the Academy invited Sacha Baron Cohen to present an Oscar they meant the actor. What they didn’t expect was Ali G, co-presenting with Olivia Wilde.

Apparently, the appearance was arranged with military style procession, helped by his wife Isla Fischer who sneakily stuck on the actors fake beard in the disabled toilets just before he went on stage.

Travelling the world promoting Borat!: Cultural Learnings of America for Make Benefit Glorious Nation of Kazakhstan, the actor, almost always in character as Kazakhstan’s most famous export, paraded in front of the world’s press in the, now infamous, men’s swimsuit.

Leaving little to the imagination, the skimpy lime green number has become a mainstay for drunken stag nights the world over.

Who better to interview a right-wing skinhead band at the British event Evil Fest than an openly gay Austrian fashion icon?

An uneasy watch at best, you can’t help but worry about the comedian’s safety as he talks to homophobic members of Gundog. Especially when he asks a worse for wear punter outside the venue if he thinks there are any skinheads that aren’t gay.

Even more terrifying, Brüno interviewed a white supremacist and former Klu Klux Klan leader Frazier Glenn Miller who went on to kill three people outside a Jewish community centre. The scene was cut from the film.

Under the guise of, shock horror, himself, Sacha Baron Cohen shocked a star-studded Hollywood audience by pushing an elderly woman in a wheelchair off the stage while accepting an award.

The comedian was the recipient of the Charlie Chaplin Britannia BAFTA Award for Excellence in Comedy. While impersonating Chaplin’s infamous walk he “accidentally” pushed Grace Cullington, the elderly actress who purportedly appeared in the 1931 Chaplin film City Lights, into the audience.

Who Is America? Is streaming now on Stan, day and date with the USA.