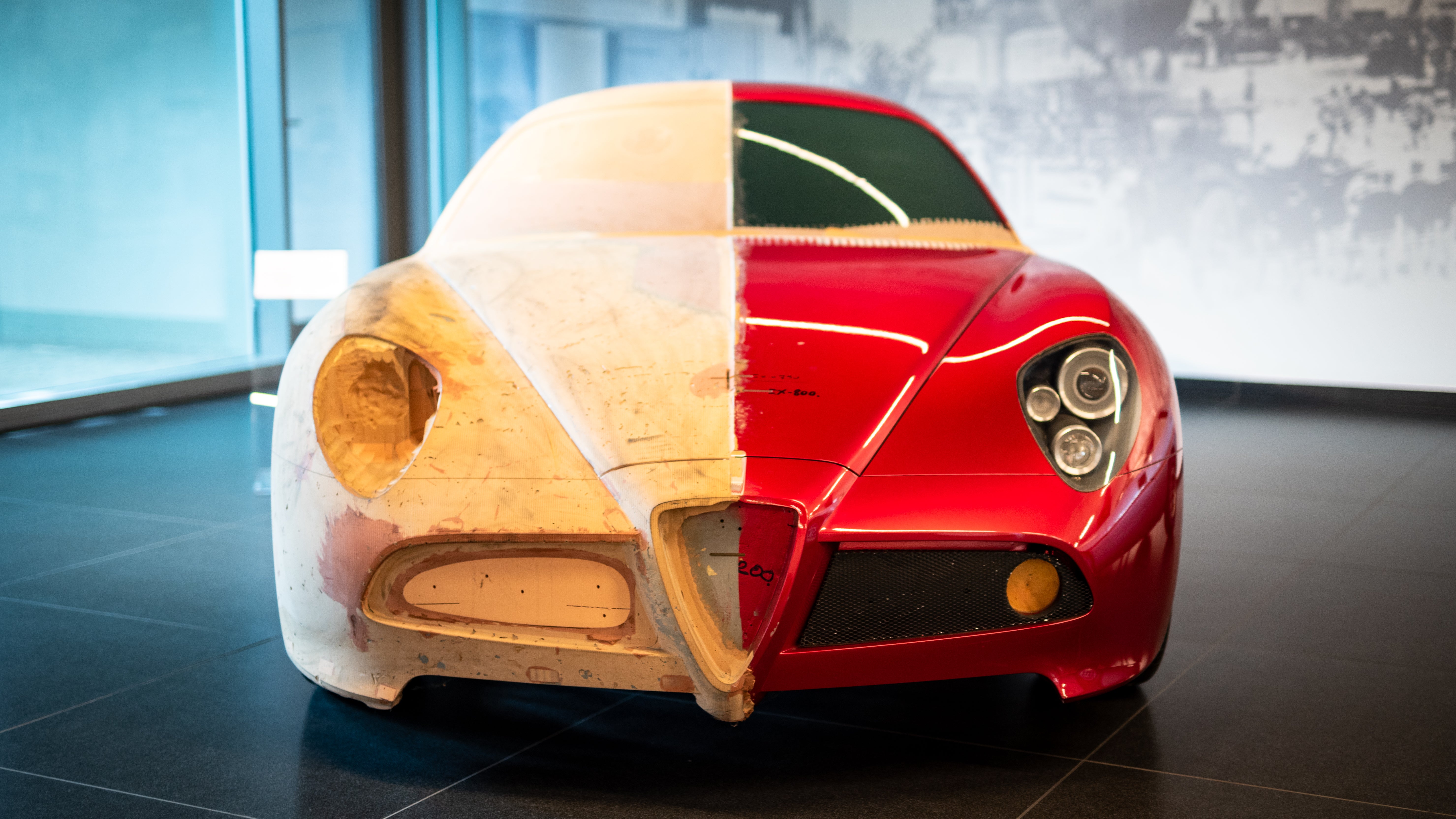 In a country with a rich automotive history as Italy, there are bound to be some special automotive museums scattered around the place. On my last trip to Italy I went to some of the more obvious ones such as Ferrari, Lamborghini, and Pagani. This trip I was in search of some lesser known museums. And located in the outskirts of Milan in a place called Arese, not far from the headquarters of Zagato and Touring Superleggera, is perhaps the best automotive museum in the world.


Home to the Museo Storico Alfa Romeo, or the Alfa Romeo Museum, it’s a six-story celebration of one of the most legendary automotive brands in the world. And the museum lives up to Alfa’s glory.

It’s easy to forget how significant Alfa Romeo used to be these days. Alfas of recent memories have been somewhat lacklustre, and that’s coming from someone who’s a self-confessed Alfisti. They have been on a comeback streak as of late, but the past few decades have been dogged by forgettable front-wheel drive hatchbacks and the like.

Deservedly so, you won’t find a MiTo or Giulietta in the museum, or even an Arna. This museum aims to celebrate the best of the best from Alfa’s 108-year history.

The museum is located where Alfa’s old headquarters was before becoming part of the Fiat empire. The Arese plant also was where some of the most beloved cars from the ’60s to the ’90s were made, including the original Giula, GTV6, and later GTV/Spider models. Driving through the main gate I had the same feeling most other people would get going to Disneyland.

As soon as you enter the main building you’re greeted with a couple of Nürburgring lap record breakers; the Stelvio Quadrifolgio and Giulia Quadrifolgio in all their camouflaged glory. Neat.

But we’re not here to see Stelvios and Giulias. After paying the 12 euro entrance fee, the least expensive of all the Italian car museums I’ve been to so far, it was time to venture down the rabbit hole that was the Alfa Romeo Museum.

Before going up to the “main section” of the museum there are already several fantastic and weird prototype cars for you to gander at. If there’s one major selling point of this place, it’s that it is as much as museum to famed design houses such as Bertone, Zagato, Pininfarina, and Giugiaro and their wacky designers as it is to Alfa Romeo.

The first cars you notice are the two 33 prototypes; the Navajo by Bertone and the P33 Cueno by Pininfarina. This is what concept cars should look like — crazy design exercises that might not make into production but who cares when they look as cool as this. But we’ll see more of those later.

Speaking of unforgettable designs, there were also a couple of Alfa’s best hits such as a model of the 8C Competizione, a car I believe to be the best looking car from this century, and a Montreal prototype shown at the 1967 Montreal Expo.

There was also a very pretty 2600 SZ in yellow next to it, which would be an attention stealer in any other situation but not when it’s in a room with something like the Navajo and Cueno.

Around the corner were more prototypes from Alfa’s interesting past. First up was the 1972 Alfetta Spider by Pininfarina. Designed around the same time other manufactures were worried convertible cars were going to be outlawed, the result was a targa top car.

Next was the Zeta 6 by Zagato, a project that was supposed to be Zagato’s return to fame the project very nearly went ahead before Alfa pulled the plug at the last minute. A shame because with its futuristic Zagato styling and GTV6 underpinnings, it could’ve been a classic.

Alfa Romeo’s involvement in motorsport spans almost everything: Formula One, touring cars, endurance racing and even rally. (Not NASCAR, although if a Toyota Supra is there these days…)

Anyway, when Alfa’s Group A GTV6 car was reclassified as a Group B car, it became less competitive. Enter the Alfasud Sprint 6C Group B prototype. It was a mid-engine rally car that never saw the light of day. Financial worries made Alfa back off from the project. I’m not sure if the Alfa Romeo Junior Zagato 2000 Periscopio prototype was also destined for rally, but with a scoop like that who cares?

Finally, before even getting to the main museum section was the Alfa Romeo SE048 SP Group C prototype, another racing project that never went through. There’s a pattern here as the Osella-Alfa Romeo PA16 also met the same fate.

The main museum is split into three sections. First is “Timeline”, a collection of 19 cars showing the evolution of the brand and how it became what it was and is today. From cars from their early days to their first “sports cars”, it was an interesting look at how quickly Alfa Romeo adopted sporty and exciting cars.

The standout from this floor though was just how spacious and well-lit it was. There was enough space to go between the cars without fear of hitting them, they weren’t roped off which it visually more appealing, and there was a whole Stark Industries vibe to the building.

Going down and we enter the “Beauty” section. This is where we really get to the heart of the museum and indeed Alfa Romeo.

You’ll find some of Alfa’s most beautiful coachbuilt cars and the best variants of the Giulia and Giulietta here. Some highlights include a 1938 Alfa Romeo 8C 2900 B Lungo by Touring Superleggera, a 6C 2500 SS Villa d’Este by Touring Superleggera, a Giulia TZ, and a Giulia Sprint GTA. There was even a section for “Star Cars”, the Giulietta Spider from Nine and the Duetto Spider from The Graduate. But it’s the prototypes that were the real stars of the show.

It’s hard to know where to begin here, honestly.

On one side there’s the original 1900 C52 Disco Volante, the inspiration for the modern Disco Volante, also made in collaboration with Touring. The silver 2000 Sportiva coupe next to it was supposed to be a low-run production of GTs that could also be used for racing. Ultimately only four were made; two coupes and two roadsters.

One of the most distinctive and unique cars in the museum was the ALFA 40-60 HP Aerodinamica prototype. Originally commissioned by a count, he took Alfa’s chassis and engine to Castanga and ordered a bullet-shaped body made of aluminium. The result is something that must’ve looked space age in 1914.

Then we get to cars that actually looked like they came from the future. The green wedge shaped prototype is the Carabo, another 33 prototype. The unmistakable wedge shaped styling was penned by the great Marcello Gandini at Bertone.

The Carabo was important in that it paved the way for all those great wedge designs to come out of Bertone, including the Lamborghini Countach and Lancia Statos.

The metallic silver car with what appeared to be a waistcoat on the passenger seat was the Iguana (actual name). The Iguana was the first Alfa Romeo designed by Giugiaro at ItalDesign and elements from this design would go on to influence some of his later work. But it had a truly incredible paint job.

Next to that was a stunning yellow car which looked more Ferrari than it did Alfa. That’s because this 33 prototype was designed by Pininfarina. It does seem like Alfa had a bunch of leftover 33 Stradale chassis laying around and just gave them away to whoever asked for them.

Last but not least was the 1996 Nuvola Concept. I remember seeing photos of this in various books and magazines and I always loved its weird looks and paint job. Unlike the other prototypes this was designed in-house by Walter de Silva, one of my favourite designers and a guy who went on to lead design at Audi and then the whole Volkswagen Group. It never went on to production but a decade later Alfa did come out with another front-engine GT.

The two lowest floors are a shrine to “Speed”, Alfa’s illustrious motorsport past. It was a lineup of Pre-War Grand Prix cars, including the Alfa Romeo Bimotore.

The Prancing Horse shield is important here, it was the first car Enzo Ferrari developed while at the helm of Alfa’s racing team. It would later form the basis for his own racing team but the groundwork started right here.

The 33 Stradale Prototype, the base for all those other prototypes upstairs, is arguably the prettiest of all 33 prototypes in its original state. The Alfa Romeo Scarabeo Prototype, though never raced, was designed by the brilliant Giuseppe Busso as a project after the Tipo 33 project. Unfortunately it never amounted to anything, which is a shame as it’s a very pretty thing.

As you go up the final escalator there’s still one more section to visit; the 4D cinema. It was quite a weird experience, a sort of virtual simulation race in Alfa Romeo sports cars new and old. There were a couple of ’80s and ’90s touring cars scattered around the hall as you exit before going to the showroom and cafe, naturally. Outside the showroom were some of Alfa’s current models should you be compelled to buy one after going on a historical tour of their glory days.

This is a must-see, not only because of Alfa’s incredible history but because it’s genuinely one of the best museums I’ve been to. The large open spaces, the lighting, the lack of barriers, and the quality of cars on display is second to none.

You’ll see cars you’ll never get any other chance to see and you’ll learn a thing or two about this fantastic company. Hopefully some of the big guns at FCA today will visit and get inspired to bring back some of that magic that once made Alfa Romeo special and loved.