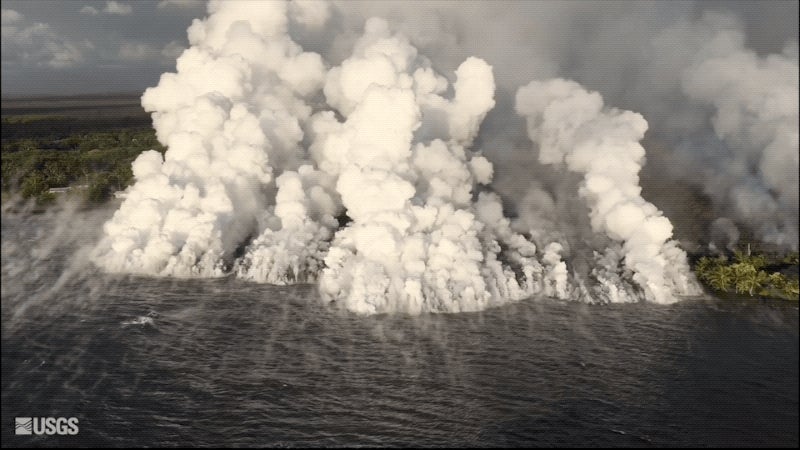 Video: It's been well over a month since the Kilauea volcano on Hawaii's Big Island started erupting, and molten lava continues to pour into the ocean at a steady pace. New footage shows the dramatic extent to which the lava is producing "laze" - an unholy and potentially deadly mixture of steam, toxic gas, and tiny shards of volcanic glass.

The US Geological Survey captured the stunning video just after 6:00AM local time on June 4, and again in the early afternoon. The wall of laze along the front of the flow is about 800m wide.

By the time the morning segment of the video was taken, lava from Fissure 8 had been pouring into the ocean for at least seven hours straight. As it cools, the molten material is forming an entirely new delta in Kapoho Bay. By the time of the afternoon footage, lava had practically filled the shallow bay. This volcano is literally changing the shape of the island before our very eyes.

The laze, a portmanteau of "lava" and "haze", may look beautiful, but it's potentially deadly. When the 1171C lava hits the ocean, a chemical reaction occurs, producing a mix of hydrochloric acid, steam, and tiny particles of glass. The ensuing clouds of laze can cause lung damage, eye and skin irritation, and death in some extreme cases.

In case you're wondering, the residents of the homes behind the creeping wall of noxious gas have fled. To date, over 2500 people have had to evacuate, and more than 300 people are currently seeking refuge at community centres.