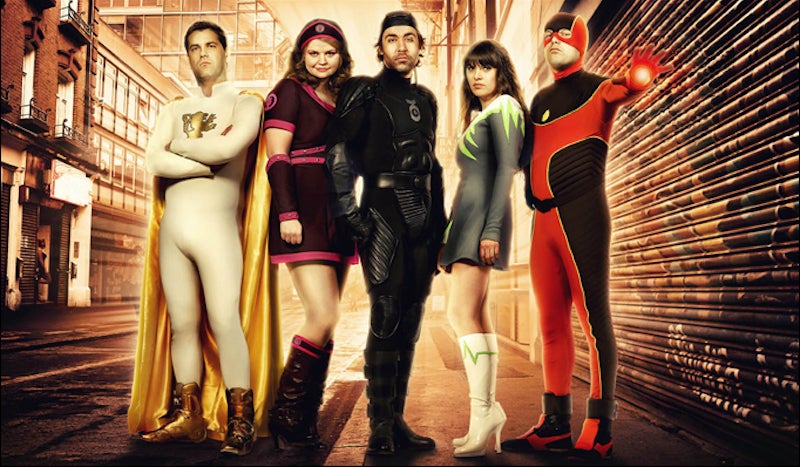 Just as Warner Bros. and Marvel were beginning to usher in the current age of their big-budget superhero blockbusters, the short-lived British TV series No Heroics dared to suggest that maybe, just maybe, people who dress up in tights and capes are kind of lame. Looking back at the show now, it's a shame that you can't really find it anywhere on the internet — and that ABC ended up passing on the once-planned US adaptation of the series.

Set in a world where costumed vigilantes are as common as comedians with terrible podcasts, ITV2's No Heroics followed the lives of four C-list capes struggling to compete with their more famous peers for media exposure.

Electroclash (Claire Keelan), a technopath with anger issues, resents the fact that most everyone only knows her for her run-ins with the law and her much more famous superpowered parents. The Hotness (Nicholas Burns), a shoddy pyrokinetic who can really only heat things up very slowly, spends his time trying to impress women and convince Electroclash to get back together with him.

Timebomb (James Lance) is a sadist who can see five minutes into the future and attends weekly group therapy for his clinical depression. She-Force, a woman with super-strength and a creepy male fanbase, longs for the good old days when she and Electroclash were the duo known as "Lady Trouble."

Trading cards that No Heroics' heroes trade with one another that reflect their popularity.Image: ITV

When they aren't out trying to perform acts of heroism in public where the paparazzi and reporters can see them, the group hangs out in the Fortress, a local cape pub where heroes get together to blow off steam. Unlike most other TV shows that focus on the melodramatic, comic book-y elements of the genre, No Heroics was mostly about the pedestrian parts of being a superhero that usually usually happen off-screen.

Here's an example: During one episode, as punishment for abusing her ability to talk to machines by the Super Powers Authority, Electroclash is assigned an underage sidekick who can trigger seismic activity. She initially hates him because he's a foul-mouthed arsehole; the others dislike him because he's exactly the reason that all adult capes are required to pay sidekick taxes, which are used to pay for all the collateral damage caused by young wards.

Rather than just introducing villains, No Heroics instead turned things like waiting for the train and accidentally scalding sexual partners into the biggest problems its characters had, because it was making a point about superheroes and our relationship to them. Beneath the layers of bawdy humour and sight gags, No Heroics was ultimately a show that poked fun at the wish fulfilment that draws people to comic books.

In response to the idea that superheroes are aspirational symbols of human exceptionalism, No Heroes chuckled and said, "Yeah, but that's just not realistic. They're still people and people are usually boring and often kind of terrible in their day-to-day lives." 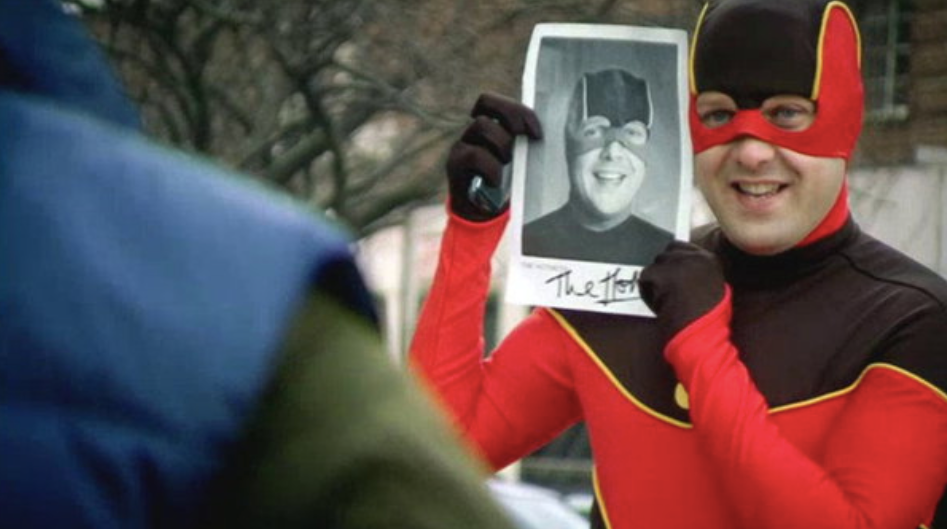 The Hotness offering a civilian one of his headshots after burning down his newsstand.Image: ITV

Excelsor (Patrick Baladi) was the closest thing the show had to a Superman, and one of the most recognisable capes in all of London. But he's also a pretentious, boorish dick who can't go five minutes without bragging about the size of his force field. Celebrity, wealth and power have the ability to turn people into the worst versions of themselves and in the world of No Heroics, those are all things that come part and parcel with being superhuman.

The show never got to the point of being preachy, but that message was woven into the series so as to remind you why you're meant to be on the core group's side.

Sure, the stars of No Heroics weren't top-tier heroes with the most popular trading cards, but that's what kept them grounded enough to be the kind of people you wouldn't mind grabbing a drink or five with. And that's practically a superpower all on its own.