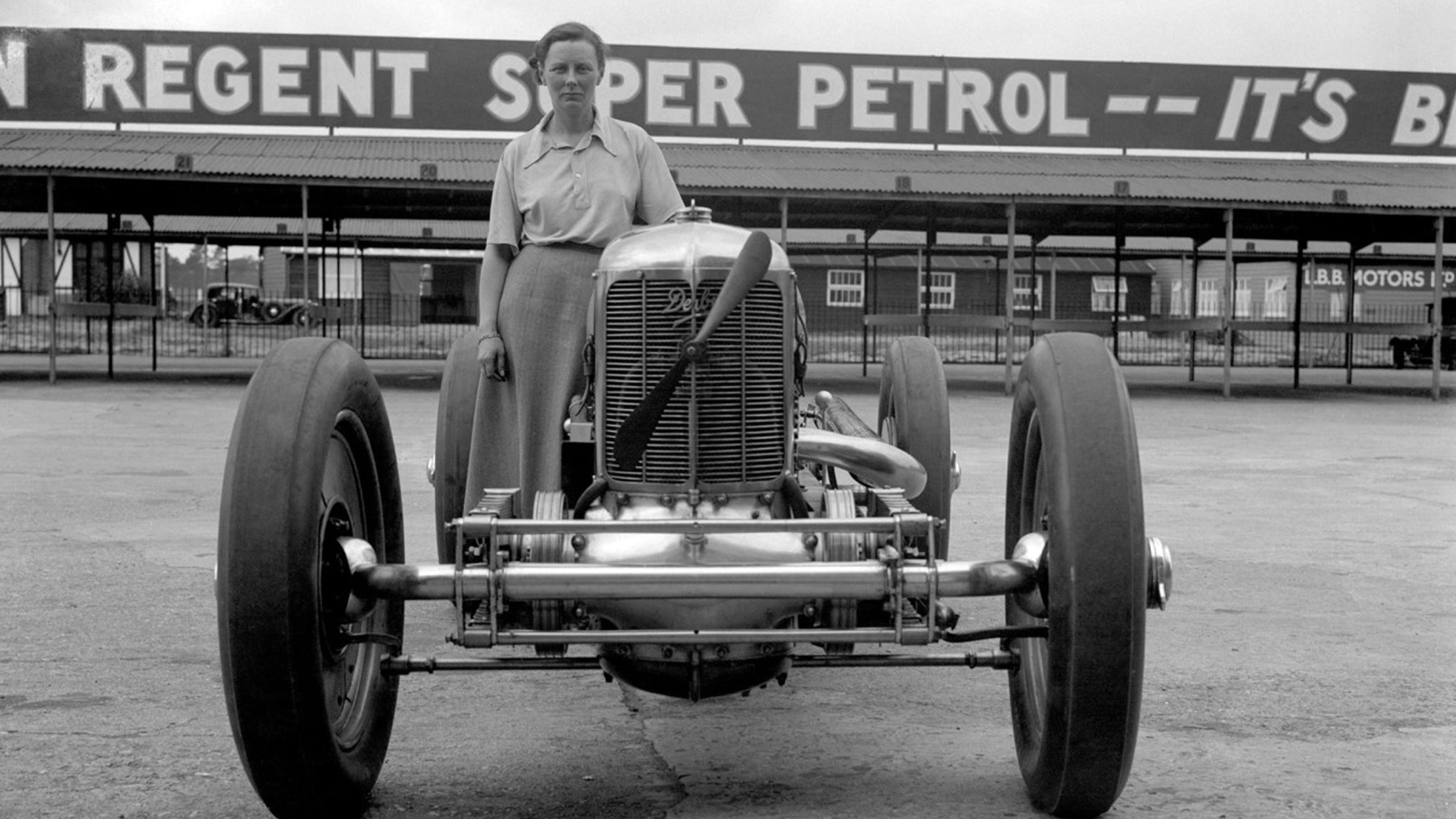 War had a habit of making women into racers. With the men occupied on the battlefield, someone had to manoeuvre ambulances through shell-cratered roads at high speed, rushing to and from emergencies. Some women became absolutely infatuated with the challenge and the adrenaline and looked to find ways to get that same heady rush after the war. One of those women was England’s Gwenda Hawkes.

Gwenda, born Gwenda Mary Glubb in 1894, came from a family of soldiers. As per Fast Ladies, Female Racing Drivers 1888 to 1970 by Jean François Bouzanquet, her father was Major General Sir Frederic Manley Glubb (who fought in the Boer War) and her brother, John Bagot Glubb, fought in WWI and even became known as Glubb Pasha, as he was commander of the Arab Legion for almost twenty years.

It made sense, then, that she would do what should could when war called her name. At the start of WWI, she joined the Scottish Women’s Hospital organisation, who sent her to the Eastern Front, as she had taught herself to drive at Cheltenham Ladies’ College. While her wartime exploits aren’t explicitly outlined, it is known that she was awarded the Crosses of St. George and St. Stanislav by the Romanian government, and that she was often mentioned in official despatches commending her work.

When she returned home, Gwenda Glubb moved out to Brooklands, where she married Colonel Sam Janson, the director of Spyker. Perhaps yearning for that adrenaline rush that she had behind the wheel, Gwenda took up motorcycle racing at the local Brooklands track and promptly fell in love. In 1921, she established the 1,609km record on a Ner-A-Car bike (covering 306km per day) and took the Double 12-Hour record on a Trump-JAP the following year. But, after Brooklands was slammed with a ban on noise at night, Gwenda was forced to start seeking out other tracks to fuel her love of racing.

She ended up at Montlhéry in France, an unrestricted circuit at the time. Her constant travels had resulted in the deterioration of her relationship with Jansen, ultimately resulting in their divorce — but Gwenda quickly rebounded. She promptly married Colonel Neil Stewart, a man whom she had met while seeking out adventure, and he was the one she moved to Montlhéry with.

Her successes still came rolling in. At Montlhéry, she co-rode a 350cc Rudge motorbike for an incredibly successful 24-hour record run, setting an average speed of 87km/h, despite several excursions off the track that didn’t manage to faze her. She and her husband moved into one of the rooms at the speed track so that they could take advantage of every possible moment of beautiful weather to try to set a new record.

But whether it was the stress of living a life on the edge or simply Gwenda’s flirtatious nature, the marriage didn’t last. Douglas Hawkes, a British motor car designer and fellow racer, had been enlisted as her mechanic. His impeccable attention to detail when setting up her bike appealed to Gwenda’s military background, and the two soon found themselves falling in love. She divorced Col. Stewart, married Hawkes, and at the age of 42 was moving on to the cars that her third husband adored as director of the Derby engine and car company.

She immediately started setting a whole host of records at Montlhéry: she shattered the world’s 100 km record multiple times behind the wheel of a Derby, covered a single mile at over 190km/h, and broke both the hour and 200 km records. In 1931, she and Hawkes bored out the Derby to take it to the 2-litre class from the 1500cc class and immediately relished success: Gwenda set a new record of 141.37 at Montlhéry. She even went back to Brooklands to try her hand at beating Kay Petre’s lap record and succeeded with a speed of 219km/h. It was great publicity — not just for Gwenda, but for the Derby company as a whole.

Banked tracks seemed to be Gwenda’s specialty — away from them, she didn’t find much prosperity. She entered Derby sports cars at Le Mans in 1934 and ’35, but she didn’t finish either time.

Not long after that, Gwenda and Douglas returned to England. With World War II on the horizon, they swapped the Derby car factory to one making aeroplane parts instead, and Gwenda found another job with an armaments factory working the lathe and making shells for the duration of the war.

After the war, the couple decided to end their racing career, instead moving out to the Greek island of Poros. The two lived a comfortable life together, finding their excitement through travelling and boating rather than racing. That was where Gwenda passed away peacefully in 1990, just shy of her 96th birthday.

Gwenda Hawkes serves as an incredible reminder that, while the restrictions on women back then were pretty tough, they could still manage to find ways around any possible barriers and demand respect. Once women got a chance to taste adrenaline in the face of the World Wars, it opened a variety of new doors to those willing to explore what lie behind them. Without women like Gwenda Hawkes trying to make sure their names were never forgotten, it’s hard to imagine what the women’s world of motorsports would look like today.