Giving your television an audio overhaul — while bringing Alexa, Google Assistant and AirPlay 2 into your lounge room — the new Sonos Beam soundbar crams a lot into a small package.

Sonos is primarily known as the gold standard in wireless multiroom audio, letting you listen to your favourite tunes in sync around your home. It’s a great way to unleash your music library or streaming service, but in recent years Sonos has staked a claim in the lounge room with soundbars designed to compensate for the underwhelming speakers built into some super-thin televisions.

The Sonos Beam is smaller than most soundbars, but has some unique tricks.

The Beam is no slouch, offering the full, rich audio you expect from Sonos, but it naturally falls short of the Playbar/Playbase; particularly when it comes to the lower end. Even compared to the traditional Sonos line-up, the sound quality is about on par with the Play:3.

The Play:3 still offers a slightly sweeter low-end but the Beam offers a much wider soundstage, which is great for watching a movie. Close your eyes and you’d swear the Beam speaker was twice as wide as it actually is.

For extra grunt you can combine any Sonos soundbar with the $999 Sonos SUB, with the option of adding two Sonos One, Play:1, Play:3 or Play:5 speakers as rears. It’s an impressive set-up but this arrangement starts to get expensive, considering at these prices you can pick up a decent home theatre system with true 5.1-channel sound.

If you just want a single speaker then Sonos’ Playbar or Playbase are better choices, if they’ll fit within your lounge room and your budget, but their smaller sibling offers a few new impressive tricks.

One key improvement with the Beam is HDMI ARC support, letting you run audio from your television to the Beam via an HDMI cable. This lets your television automatically control the soundbar, so you can use its remote to adjust the Beam’s volume.

Keep in mind none of the Sonos soundbars support video switching. The idea is to connect all your players and set-top boxes directly to your television and then run a single audio cable out from your television to the soundbar.

While soundbars beef up the explosions in action movies, they also offer advanced audio modes to optimise the sound for listening late at night; although you need to control them via the Sonos app on your smartphone or tablet.

“Night mode” dials down the explosions while turning up the quiet sounds, so you don’t need to constantly ride the volume controls when you’re worried about waking the household. Meanwhile, “Speech Enhancement” makes the dialogue clearer, allowing you to keep the volume lower at night. These options can help keep the peace in a busy household.

Serious audio buffs will lament the fact that the Beam still lacks DTS and Dolby Atmos soundtrack support, like its larger siblings, but if you’re using HDMI ARC it can convert DTS to Dolby Digital on the fly rather than dropping back to 2-channel stereo.

These days most Blu-ray movies and some Ultra HD discs forgo Dolby Digital in favour of DTS/DTS-HD soundtracks, but the fact is that few if any televisions will pass-through DTS sound from a disc player. Lack of DTS support isn’t a deal-breaker for your average home, considering that if you care about such things then you’re probably in the market for a full surround system rather than a soundbar.

Of course, along with playing the audio from your television you can also use the Beam as a standard wireless Sonos speaker for playing music. You can stream audio from your computer and handheld devices, from your home music library or from a wide range of music services, playing the same song in sync throughout your home or different tracks in different rooms.

Thankfully turning on the television automatically overrides the music, ensuring that the Beam “just works” for less-tech savvy members of the household. 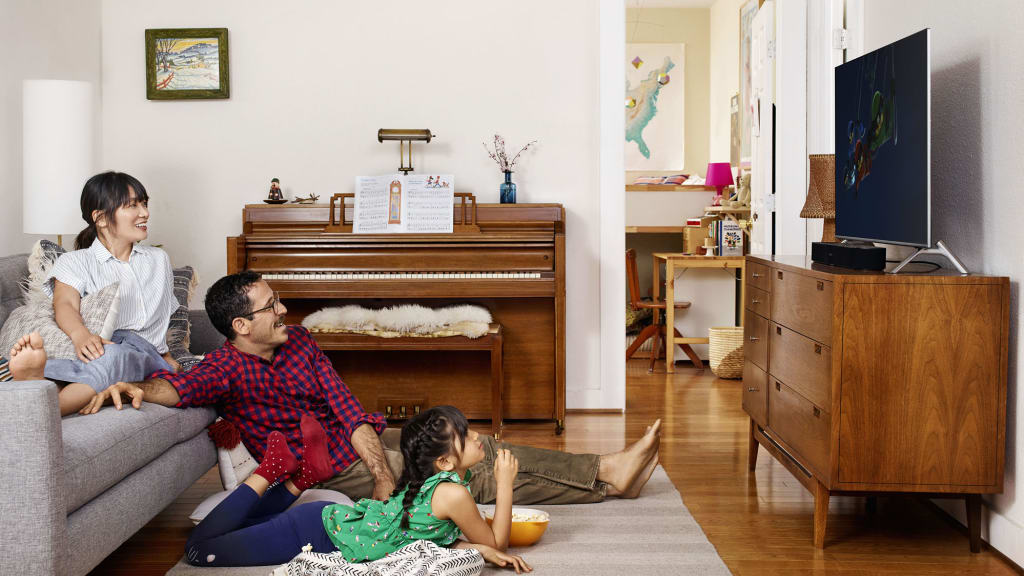 Beam will supply much better sound than your TV, but audio buffs might find it underpowered.

The Beam’s most impressive party trick is that, like the Sonos One, it can play host to Amazon and Google’s smart assistants thanks to a far-field microphone array which lets you talk to it from across the room.

You can use these talkative smart assistants to answer queries, control smart home gear, request music and much more. You can even ask it to adjust the volume when watching television, rather than reaching for the remote.

Amazon Alexa already works on Sonos gear in Australia, while support for Google Assistant is coming by the end of the year. You’re not forced to choose, as it will be possible to run them both side-by-side.

To round things out, Sonos is adding AirPlay 2 support in July so you can stream directly from iOS devices or control the Beam via Apple’s HomePod.

In terms of sound quality, the Beam is head and shoulders above all Amazon and Google’s speakers, with the exception of the Google Home Max which is coming to Australia in August and is roughly on par with the Sonos Play:5. Meanwhile, the Beam is about on par with Apple’s HomePod, which also falls a tad short of the Play:3.

As both a soundbar and a wireless multiroom audio speaker, Sonos’ Beam is an impressive allrounder that’s hard to beat; especially if you’d take advantage of a built-in smart assistant.

While your average punter would be very impressed with the step up from your television’s built-in sound, those with an ear for quality might consider it a little underpowered for a soundbar compared to the Playbar/Playbase. They might see it as a better fit for the bedroom or rumpus room rather than the main television in the lounge room.

Meanwhile if you’re just interested in wireless multiroom audio then you’d be better served by Sonos’ Play:3 or even stepping up to the Play:5 if you really want to rock a large space. Alternatively a stereo pair of Sonos One, Play:1 or Play:3 speakers would do a better job of filling a smaller room with music than a single Sonos Beam.