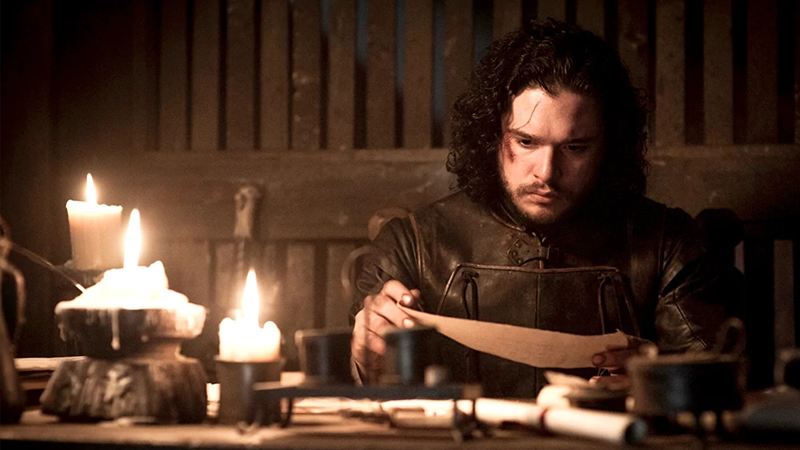 Game of Thrones has long had a reputation as a production that will go to extreme lengths to stop secrets from leaking out. It's had an equally historical reputation for secrets leaking out during filming in spite of this, so while the latest safeguard may be one of the show's most absurd yet, it probably won't help that much.

In ancient times, actors could read Game of Thrones scripts by candlelight on a physical material known as "paper", but not any more. Image: HBO

That latest measure, apparently, is creating digital-only versions of the final season's scripts, that then erase themselves bit-by-bit when a scene is finished shooting. That's according to star Nikolaj Coster-Waldau, who recently revealed the tidbit to Elite Daily:

They're very, very strict. It's reached a crazy level this year. We actually get the scripts, and then when we've shot the scene - and we only have it digitally - and then when you've done the scene, it just vanishes. It's like Mission: Impossible. "This will self-destruct."

If they actually did spontaneously combust instead of just erasing themselves, it would be truly ludicrous, but alas, we'll have to settle with the silliness of these scripts vanishing into the digital ether the moment they're done with.

But, as with HBO's previous attempts to control the flow of Varys-ian whispers from the set, it probably isn't going to stop at least a few things from leaking out of Westeros. After all, location filming is still a thing, and Game of Thrones commands big enough sets (and big enough attention from fans) that hints of what's to come are inevitable.

In comparison to prior seasons, fewer details have emerged about the final season so far - but that hasn't stopped pictures hinting at two major conflicts and rumours of some big character meetings from hitting the web already.

Instead of coming up with sillier and sillier ways to try and turn making Game of Thrones into a paranoid spy thriller, maybe HBO should just embrace that some things will always get out because people are still wild about Thrones. And there isn't much of it left to get wild about! Well, at least until the prequels.