In The World Of Male Dolphin Alliances, Individual Names Identify Friends And Foes 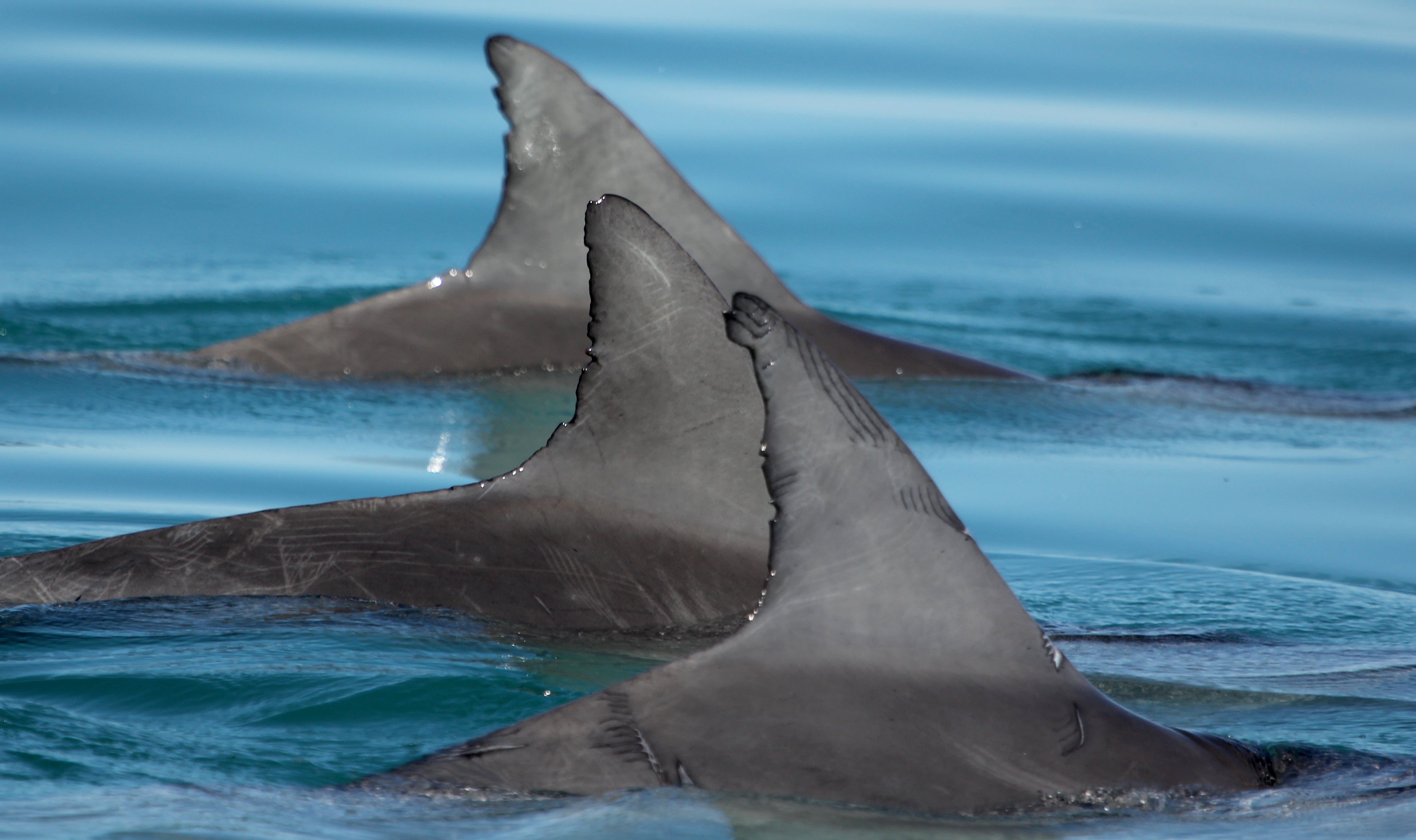 The life of a bottlenose dolphin can be surprisingly rough, with individuals chasing, biting, and smashing themselves against each other in the struggle for social dominance. Sometimes, males form long-lasting alliances with each other to gain an edge, but as new research shows, not at the expense of losing an indelible aspect of a dolphin's identity: their own unique name.

Dolphins make all sorts of noises, like burst-pulses, clicks, and whistles. Some of these sounds are used for echolocation or conveying mood, but they're also used by dolphins to call out to each other by name. Marine biologists aren't entirely sure how each dolphin gets their name, but a distinctive "signature whistle" emerges within the first few months of life, and it sticks. Research done a few years back, for example, showed that signature whistles among wild female bottlenose dolphins remained stable for at least 12 years, pointing to the social importance of names amongst this species of dolphin.

Both male and female bottlenose dolphins call out to each other by name, but among the males, these names have an added importance, as new research published today in Current Biology shows.

"We found that male bottlenose dolphins that form long-term cooperative partnerships or alliances with one another retain individual vocal labels, or 'names,' which allows them to recognise many different friends and rivals in their social network," said Stephanie King, the lead author of the new study and a marine biologist at the University of Western Australia, in a statement. "Our work shows that these 'names' help males keep track of their many different relationships: who are their friends, who are their friend's friends, and who are their competitors." Male bottlenose dolphins form cooperative groups, or "nested alliances," to pursue and defend their access to females. Previous studies have shown that these relationships often last for decades, and they're a critical aspect of a male's reproductive success. In Western Australia's Shark Bay, for example, males cooperate together in first-order alliances consisting of two to three individuals. Together, they "herd" and control the movements of a single female (we'll spare you the unpleasant details, but more information about this sexual behaviour can be found here). But second-order alliances exist as well, which consist of four to 14 males. Second-order alliances are considered the core unit of male social organisation — a group that works together to gather and defend females.

For the new study, King and her colleagues sought to determine if vocal cues and signature whistles play a role in coordinating complex social behaviours among male bottlenose dolphins, including cooperation. One possibility, as suggested by a 1999 study of dolphins at Shark Bay, is that allied males drop their names in favour of one shared whistle type. Another possibility is that dolphins assign nicknames to each other, or adopt names that sound similar. But as the results of the new study showed, this isn't the case. Males within these gangs retain their individual names, and don't share a common call, akin to a secret password, with their cooperative chums.

To figure this out, the researchers took a closer look at the bottlenose dolphins in Shark Baby — a population that's been studied steadily for the past 30 years. By using underwater microphones and long-term photo-identification records, the researchers identified the signature whistles of 17 adult males, who together comprise six first-order alliances across three different second-order alliances. After meticulously scrutinizing each call, the researchers found absolutely no variations in the names used by the allied males. This suggests male dolphins in tight partnerships don't just suddenly change their names, as was previously suggested.

"With male bottlenose dolphins... each male retains a unique call, even though they develop incredibly strong bonds with one another," said King. "Therefore, retaining individual 'names' is more important than sharing calls for male dolphins, allowing them to keep track of or maintain a fascinating social network of cooperative relationships."

Naomi Rose, a marine biologist at the Animal Welfare Institute in Washington, D.C., liked the new research, saying the authors did good work and that their methodology was impressive. For Rose, who was not involved in the study, the upshot of the paper is that dolphins have names and they don't change their names just because they hang out more with certain other dolphins.

"Generally speaking, biologists find that animals change their vocalisations over time to fit in with whatever group they join as adults — they use vocalisations as a means of recognising other group members, so being part of the group is more important than recognising an individual per se. It also makes it simpler intellectually to only have to remember the 'secret handshake' rather than all the individual group members," Rose told Gizmodo. "This study shows that these dolphins don't do that — for them, long-term recognition of 'Tom,' 'Dick,' and 'Harry' as individuals is what matters, rather than more generic recognition that a dolphin is in their gang. They remember Tom, Dick, and Harry, AND that they are members of their gang — they don't need the secret handshake at all. That's more sophisticated intellectually."

This result, said Rose, emphasises that dolphins are self-aware and individualistic, rather than interchangeably part of a population or group. "They are individual beings with individual minds," she said.

Rose also found it interesting that the new study contradicted the results of the 2004 paper, which was a study of the same population. But as King and her colleagues note, this is likely because the previous study used a very small sample size, the researchers only looked at first-order alliances, and the alliance formed under abnormal circumstances (the dolphins hung out on a shallow beach where humans regularly fed them with fish).

"In short, the previous study appeared to be an anomaly rather than the norm for this population," Rose said. "This new study is the kind of work that builds on previous results; if and when previous results can't be replicated, it is important to examine why and offer reasonable explanations for the differences, rather than simply dismiss the earlier work."

The new study offers some fascinating insights into dolphin behaviour, but the next phase of the research promises to be even better. The researchers plan to play the recorded signature whistles of each individual male back to each other to see how each male will respond depending on the context. It will be a while before we truly understand the nuances of dolphin communication and behaviour, but we're getting there one click, burst-pulse, and whistle at a time.

Tegan Jones 09 Apr 2020 6:48 PM
Over the past few weeks there has been an alarming uptick in social media posts linking coronavirus to the 5G rollout. Some draw comparisons between the new mobile network and the spread of the virus itself. Others claim the virus is a manufactured ruse to force people inside while the government fast tracks the construction of more 5G towers. Unlike other 5G theories, these posts aren't merely relegated to the bowels of Reddit and fringe Facebook groups. They're gaining mainstream traction and enjoying pronounced plausibility thanks to celebrity endorsements. They have now gained enough traction to manifest real world violence.