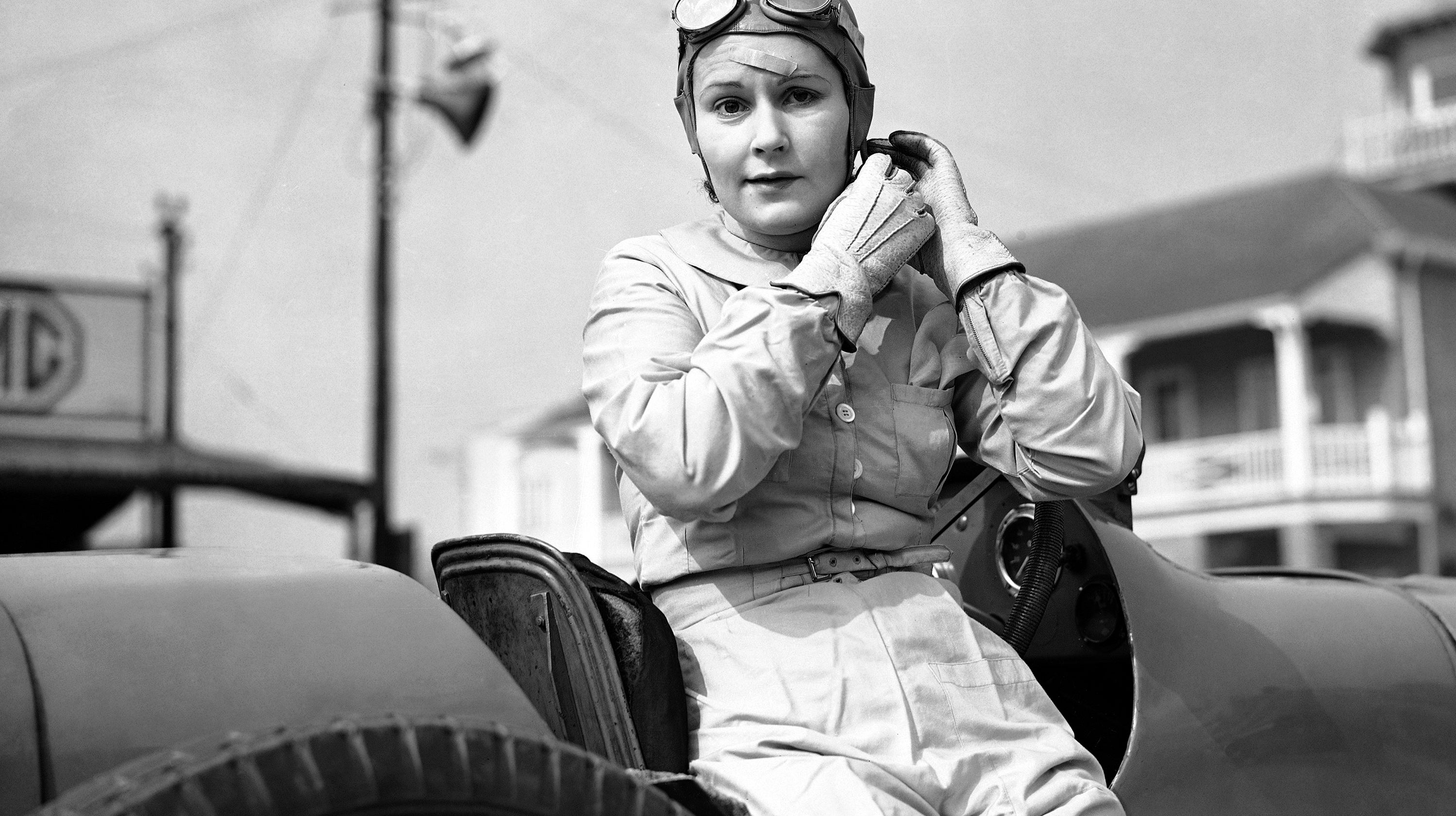 It's 1934. The driver that has just set the fastest Women's Outer Circuit record at Brooklands parks her car and emerges, triumphant. At only 4'10", she's dwarfed next to her 10.5 litre V12 Delage, a vehicle that she has almost effortlessly mastered. The adoring press captures her radiant smile as she removes her helmet and smooths a hand over her immaculate baby blue overalls. Her name is Kay Petre, and she is the first woman to go 209km/h around England's famous banked circuit.

Kathleen "Kay" Defries was born in 1903 in Toronto to a barrister, which saw her completing her education in England before returning to Canada, only to then study art in Paris. Not much is known about her first husband, Langlois de Lefroy, except that he left her a widow at an incredibly young age. She then married the Englishman Henry Petre five years later, in 1929, who had opted out of a career in law to pursue aviation. He was Australia's first aviator, going so far as to found the Royal Australian Air Force's predecessor organisation, the Australian Flying Corps, and was frequently mentioned in despatches during WWI.

It was from Petre that Kay got her first taste of an adrenaline-soaked lifestyle. Henry bought Kay her first racing car for her birthday, a black low-chassis 4 1/2-litre Invicta in which she made her Brooklands debut in 1932. It was a large car, though, and incredibly difficult for a woman of her stature to handle at high speeds. Her first outing was forgettable for everyone except Kay — she had caught the racing bug.

Her next car, a Daytona Wolseley Hornet Special, still wasn't quite her style, despite the fact that she brought home a third place behind its wheel. For 1933, she finally settled on a 2-litre GP Bugatti, a car that seemed to suit her much better. With it, she took second at a Women's Mountain Handicap race, and she dominated the Opening Meeting of the 1935 Brooklands season. Kay raced just about anything she could get her hands on, which sometimes included borrowing Bugattis from friends to set Women's Speed Records and compete in relay races.

This wasn't exactly an era where cars were easy to drive. According to Motorsport Magazine, Kay was successfully manoeuvring vehicles that were over fifteen times her weight, shredding tires and working through technical difficulties and poor handling. She actually needed wooden blocks strapped to her feet in order to reach the pedals, making it all the more impressive that she was actually able to master the delicate balance between finesse and brute strength necessary to win races.

Kay was a regular at the big-name races in Brooklands during 1934 through 1936. She never missed an opportunity to drive in the Brooklands 500 or the Double Twelve Hours, teaming up with big names like Prince Bira. And when that wasn't enough, she got behind the wheel of sports cars at Donington and Crystal Palace, alongside plenty of rallies.

In 1937, Kay got her big international (and intercontinental) break. She was invited to compete with her Riley in the South African Grand Prix, where she competed in three races. While she only managed to finish one of them, that wasn't too surprising in an era of chronic unreliability. One race was all she needed to make an impression on Bernd Rosemeyer, the legendary German driver who had gained international popularity for his fierce driving style. Via his friendship, she was able to access even more motoring opportunities.

One of the most important being the Paris to Nice rally. Behind the wheel of a "Grasshopper" Austin, she made such an impression in the vehicle that she was offered a role as the first ever female works driver for the Austin single-seater race program — which she readily accepted. This opened up a near-unlimited world of possibilities for her behind the wheel, including a chance to race at Le Mans alongside her male peers.

But unfortunately, her promising career came quickly to an end. During practice for a 500 km race a Brooklands, fellow driver Reg Parnell misjudged an overtaking move on the banking. Losing speed, he slid down and crashed into the back of Petre's Austin 7. She subsequently lost control of her car and crashed badly — the details are not described in Motorsport Magazine, but we do know that she was pinned under her car and suffered awful injuries.

After that, Kay Petre never climbed behind the wheel of a race car with the intent of racing again. As tragic as this premature end was, though, the impending threat of World War II very likely would have saw an early retirement anyway.

But that didn't mean Kay gave up her love of the automobile — instead, she just switched her focus. As motor racing took a break during the War, Kay worked as a food writer before swapping to motorsport journalism for The Daily Graphic later on.

And her ties to Austin weren't completely severed, either. In the 50s, she was a colour correspondent for the Austin Cambridge, and many of her ideas for the interior of the car were adopted by the company (although her suggestions for painting cars pink and baby blue were not quite as popular with the design heads). Her ideas were actually quite popular, so much so that she was also hired by the British Motor Corporation. As the 50s progressed, she was responsible for the fabric design of the interior of the Mini and for brightening up the Austin to appeal to the growing number of everyday female drivers.

Kay Petre stands both as a model of what women in racing should have been, and what they could have been. With so many incredible women preceding her appearance in the sport, she was able to enjoy relatively little resistance, aided in part by her powerful presence and looks. In fact, she was offered a wealth of opportunities that had been previously unheard of, such as her partnership with Austin.

It is genuinely unfortunate that her career was cut short by an accident because she appeared to be on the cusp of some incredible accomplishments. But the racing world of the 1930s was necessarily a dangerous one, and injury or death was often the name of the game. Nevertheless, Kay Petre is still a trailblazer for the sport, showing that women could not only race but have a hand in the development process of automobiles — a feat nearly unheard of at the time.