California Could Release Around 8,000 State Prisoners to Curb Covid-19 Spread

Westworld’s Shōgun World Was Everything I Expected It To Be, But Not Much Else 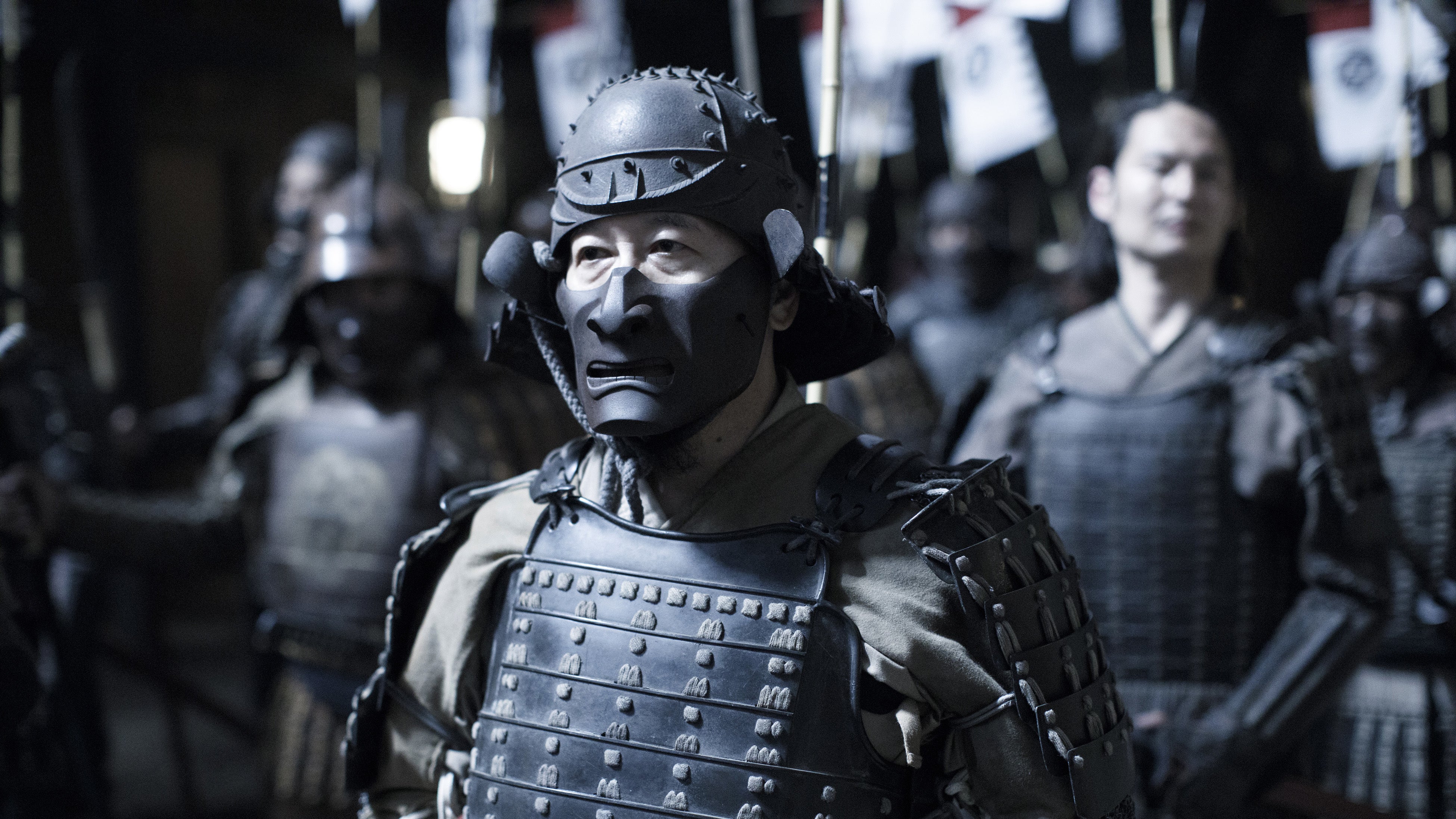 It’s the episode we’ve all been waiting for since the season one finale, but it turns out Shōgun World faces a unique problem that I wasn’t expecting, and it wasn’t the ninjas, tyrannical lords, or even “cop-killer” samurai that fill the park. It’s that compared to Westworld, and all the care that Delos and Dr. Ford put into creating it, Shōgun World sort of sucks.

“Akane No Mai” starts out terrifically as Maeve, Hector, Lee, and the gang have been captured by a ronin with the terribly generic but I guess appropriately-for-a-theme-park-called-Shōgun-World name of Musashi (played by veteran Hiroyuki Sanada) and his cohorts. He and his gang are off to visit a nearby geisha house, run by a madam named Akane (played by Pacific Rim‘s Rinko Kikuchi), and to steal its safe.

If that doesn’t sound familiar, it becomes pretty clear once the traditional Japanese shamisen breaks into the Rolling Stones’ “Paint It Black,” as Mushashi and Akane reenact the same theft storyline that Hector and Maeve performed hundreds of times in Westworld. Maeve’s realisation that she is, essentially, encountering herself in Akane is some (more) top-notch acting by Thandie Newton, as Hector finds a fellow super-handsome outlaw in Musashi, and Armistice meets her Japanese counterpart (The Wolverine’s Tao Okamoto) with a dragon tattoo instead of a snake. Hell, Musashi even scoots Akane out of the way of the falling safe, just as Hector did. An embarrassed Lee points out that he has a lot of stories to write, guys; of course he had to “plagiarize” his own work a bit.

Unfortunately, Westworld doesn’t explore this potentially fascinating encounter, really, other than Maeve giving Akane some knowing looks and both Akane and Maeve being similarly badass. Instead, it delves into a very traditional samurai entertainment plot: Akane has a beautiful young geisha named Sakura (Lost in Space’s Kiki Sukezane) under her purview, and the Shōgun sends his men to claim her. Akane tries declining politely at first, then tries declining impolitely, which is to say killing the Shōgun’s envoys. Knowing that they have incurred his wrath, Akane, Musashi, and the rest decide to leave under the cover of darkness.

That’s when the ninjas come. 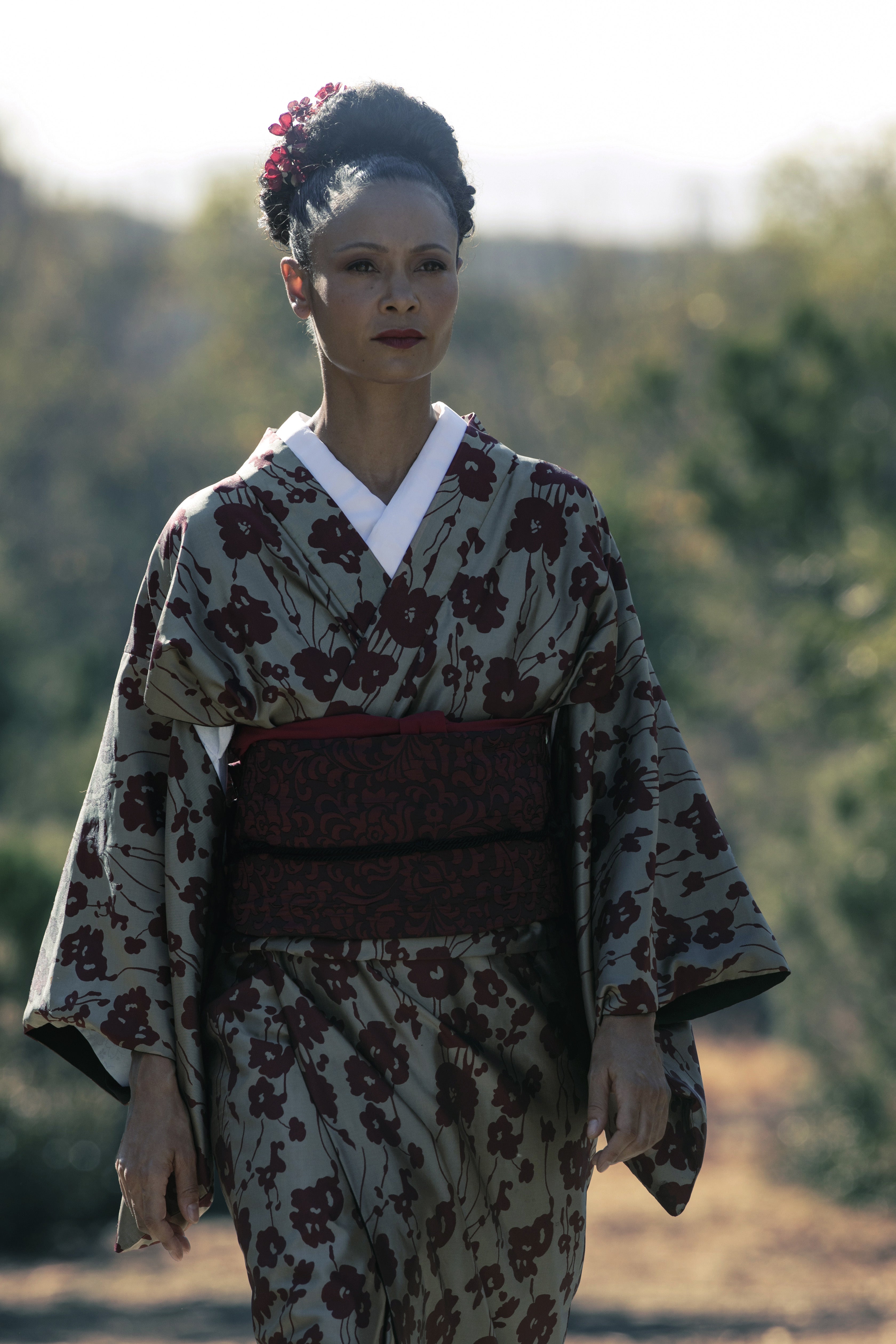 It’s so generic that it seems like it has to be the most basic adventure Shōgun World has to offer but, apparently, it isn’t. Instead, Lee says that the ninjas aren’t supposed to be in this storyline at all, and neither is the Shōgun; apparently, the ruler has awakened like Westworld’s hosts. That turns out not to be the case – the Shōgun has Robot Brain Juice leaking out of his ears like Bernard does, so he’s not conscious, just broken – but the end result is a samurai story with no nuance whatsoever.

The Shōgun’s army captures Sakura, and of course Maeve decides to help her sister-from-another-mister-programmer save her surrogate daughter. The evil Shōgun pretends to allow Akane to make a trade for Sakura, but murders the young woman at the last minute. Somehow it works out that Akane still performs a traditional dance for the Shōgun, but uses the distraction to murder him – although, this being Westworld, instead of just stabbing him Akane somehow has the chance to literally saw the top half of his head off. Vengeance served, and not much else.

Honestly, the only thing that is really explored here – and develops – is Maeve’s ability to voice-command her fellow hosts, which is a major, major part of the storyline. First, she discovers she can’t control the Shōgun World hosts because she’s speaking to them in English. Much more weirdly, when a ninja is choking her out, Maeve somehow manages to think kill yourself at him, and he decides to headbutt a spear point. When the Shōgun learns of this “witchery” he has his men cut off their own ears to protect them from her voice – except she still manages to silently order the Shōgun’s troops to kill each other. It’s a crazy new power for Maeve, although it’s not one that needed to be revealed in Shōgun World, which leaves the park’s inclusion feeling rather arbitrary, a new exotic park trotted out just to put something flashy on screen. The show doesn’t seem to have anything to say with it, or about it. Still, as far as flashy things go, Thandie Newton in a kimono wielding a samurai sword is pretty damn great.

We only check in with one other storyline, really, and that’s Dolores and Teddy. If you’ll recall, we last left the troubled couple when Teddy had kindheartedly let the Confederales Dolores had ordered him to execute go. This ends up going better for Teddy than I thought it would have, which is to say Dolores doesn’t just outright murder the bejeezus out of him. Instead, she brings him to the “hometown,” so to speak, of Westworld, where she’s ordering her army to fix up the train for whatever the first part of her assault on the world of the guests is. 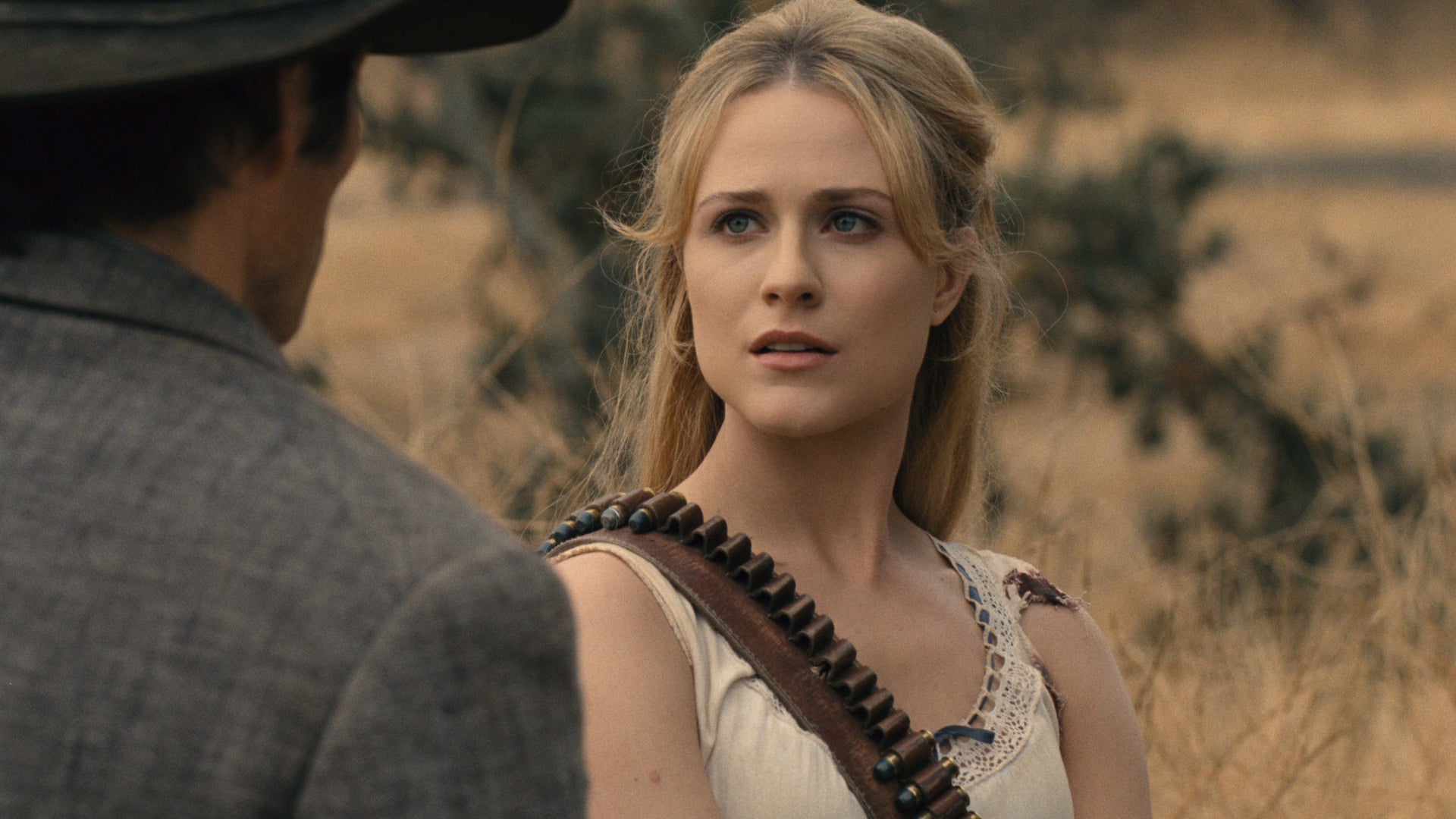 Dolores (Evan Rachel Wood) hostsplains to Teddy about why you need to set weak cows on fire. Photo: HBO

Dolores tells Teddy two things: 1) that she truly, genuinely loves him, and it’s not just because of the stories the park put in her head, and 2) a long story about how one time her family’s herd had bluetongue and her father somehow had to set fire to all the weak cows in order to stop it and save the rest of the herd. (I’m assuming this is part of a memory the park gave Dolores, because a “let’s give cows a fly-based disease” storyline sounds like the most boring park experience ever.)

This talk of murdering the weak for the greater good is, believe it or not, a bad sign. After a passionate night of unscripted lovemaking, Dolores leads Teddy into a charnel house of some kind — just to drive the point home, I guess – and has her pet tech forcibly alter Teddy’s code in some kind of profound and dangerous way. “I’ve seen you’re not going to make it,” she tells him, with real sadness. Whatever she’s doing, it will be to make him stronger — although Dolores’ current definition of strong involves culling the weak, so chances are Teddy is being changed for the worst, or at least the more murderous.

And that, really, is that. I’m not going to say “Akane” is a bad episode of Westworld – I mean, Maeve literally fought ninjas– but it is a bummer that we’ve finally made it to Shōgun World and the show didn’t do anything with it (yet). It didn’t even address the cultural appropriation inherent in its existence as much as it barrels past it and tries to distract you with ninjas, something that is only possible because there are zero guests in the Shōgun World we see. It’s all guests, other than Maeve’s captives, who have no agency in the park. It’s definitely the easy road to take around a very thorny issue, but Westworld has not really been known for ignoring over how awful human beings can be. Still, it looks like we’re sticking around Shōgun World a bit longer, thanks to the army approaching Maeve and Akane at the end of the episode, so hopefully there’s more to the new park than ninja fights.

We’re halfway through the second season, and I fully admit I don’t have the faintest clue where the show is heading – which is exciting, to a degree, but also frustrating, It’s not that I want all the show’s mysteries to be revealed to me now, but as complicated and labyrinthine as season one was, I never doubted that there was a plan, a story that was being told. I imagine things are going to tie together and wrap up much more neatly that it appears at the moment, but right now this season still feels aimless to me. I don’t think it is, but it’s not driving me to obsess and wonder over it as it had originally, and that’s sort of a bummer.

In a way, the show and Shōgun World share that in common. They both have all the elements to be enthralling, but right now they seem like weaker versions of the original. I hope — and expect — I’ll be proven wrong by the end, but for now, I can’t help but worry that Lee isn’t the only writer who’s been half-assing his work. 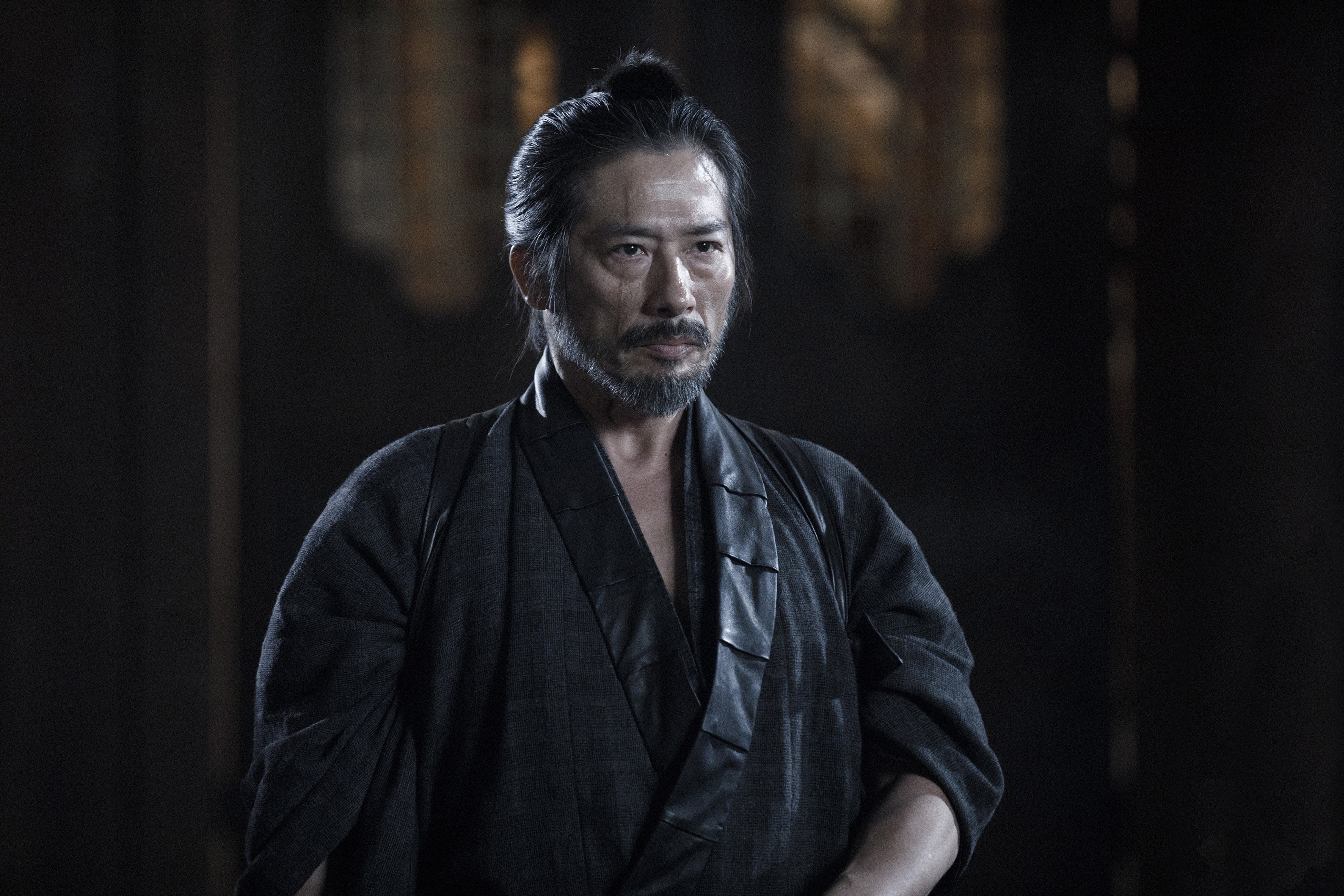