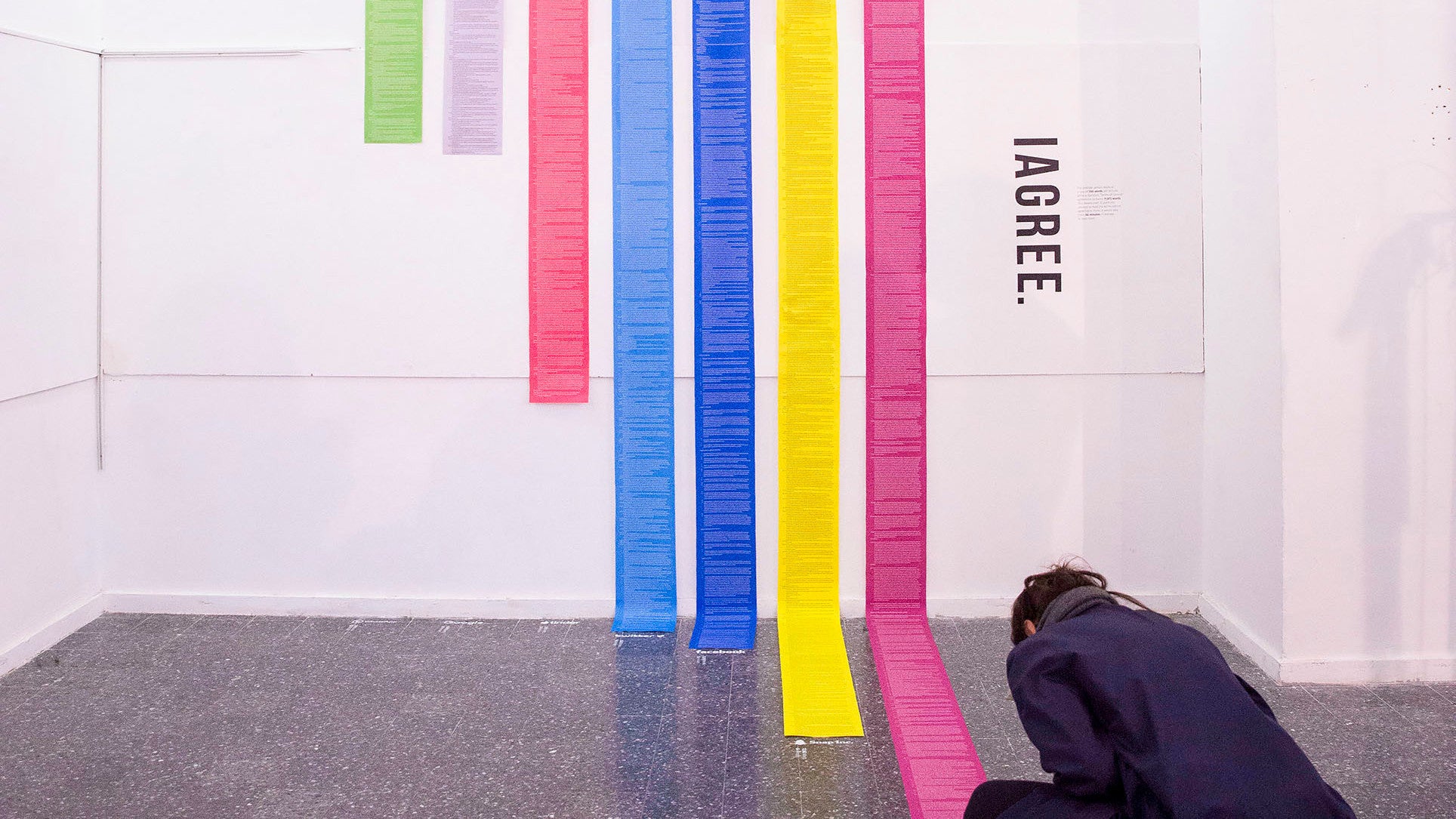 Made up of colourful scrolls cascading down a wall, artist Dima Yarovinsky’s installation “I Agree” is beautiful – at face value. If you read the fine print, however, you’ll learn that it’s a statement against our blind compliance with tech giants.

Each scroll is a single tech company’s terms of service agreement, annotated at the bottom with a word count and the time it takes to read. Yarovinsky focused on services that we use regularly, displaying the user agreements of Instagram, Snapchat, Facebook, Twitter, Tinder, Google and WhatsApp. He told Gizmodo in an email that he wanted to show how “small” and “helpless” we are against the power of massive corporations, specifically when it comes to blindly accepting their terms of service. Yarovinsky noted that these documents have no room for negotiation and that some people might not even know they agreed to them.

“Ticking the box, ‘I have read and agree to the Terms,’ is the biggest lie on the web today,” Yarovinsky said. He notes that the average person reads 200 words per minute, but that the typical terms of service agreement has nearly 12,000 words. That means that it would take someone about an hour to read the average ToS agreement.

Yarovinsky is not wrong in that most people don’t read these agreements before clicking them. According to an experiment conducted by two communications professors in 2016, hundreds of university students mindlessly accepted the Terms of Service to join a new social network, The Guardian reported. In doing so, they agreed to give the social network their future first-born child.

The social network was fake, but the results of the experiment indicate that people are quick to risk signing away just about anything when confronted with exhaustive agreements.

Similarly, 22,000 people agreed to do 1000 hours of labour – including scraping gum off the street and cleaning toilets – when they signed a Wi-Fi company’s terms of service agreement last year. Only one person pointed out the insane clause to the company, which it said it inserted as a part of an experiment.

Sadly, there are also plenty of real-world examples of how this can go wrong. Facebook recently updated its terms of service, but that didn’t make it any hellish to comb through – and it still collects your phone and text message history, for instance. And when users accept Uber’s terms of service – by simply using the app – they are waiving their rights to a trial by jury, a policy a number of women are currently fighting.

Yarovinsky’s project was part of Bezalel Academy of Arts and Design’s infographic course. The showcase is currently installed at the Aalto University in Finland as part of the Visualising Knowledge conference.