The Valkyrie Of The Motorcar Survived The Race Of Death, A Sunken Ship And An Assassination Attempt 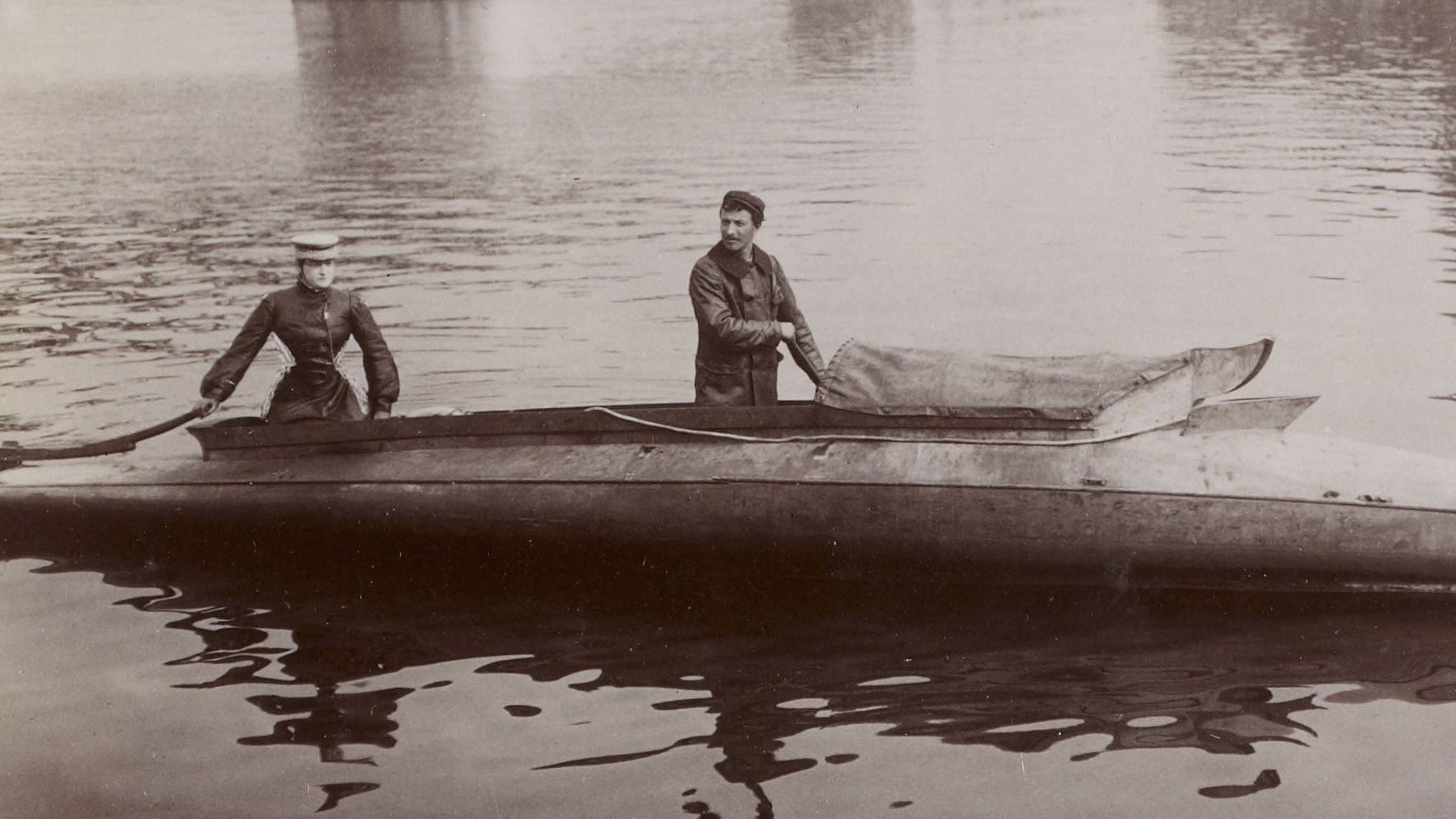 What do you do when your husband dies, leaving you a widow at age 27? Do you go racing, compete in motor boating, travel around the world, become a published author, and get involved in a scandal over a nude photograph? If you're Camille du Gast, you'll be doing all of those and still find time to go ballooning, become a concert pianist, and become the only woman in the Automobile Club de France.

Du Gast was born in Paris in 1868. Not much is known about her early life until she married Jules Crespin, a manager and majority shareholder of one of the largest department stores in France, in 1890. The marriage didn't last particularly long, though; Crespin died a mere six years later, leaving du Gast as a wealthy widow with a young daughter and a taste for adventure.

While her husband was still alive, du Gast got her first taste of adventure. The couple were avid hot air balloonists, but Camille took it a step farther. In 1895, she jumped from one of the balloons from over six hundred metres in the air. Because it was one of the balloons they used to advertise Crespin's department store, Crespin made du Gast perform her stunts under her maiden name to avoid it looking too much like a publicity stunt. Which, honestly, it kind of was.

It became the name she was known for, though. In 1900, she fell so head-over-heels in love with racing after watching the start of the Gordon Bennett Cup race that she went out and bought a Peugeot and a Panhard et Levassor the next year, became the second woman to get her driver's licence, and entered into the Paris-Berlin race.

She was one of two women entered in that race, the other being fellow Frenchwoman Baroness Hélène van Zuylen, who had already competed in a race in 1898. A race of that length was run in three legs: from Paris to Aachen, Aachen to Hanover, and Hanover to Berlin. Back then, the concept of a race track hadn't yet taken hold, so races were generally run as endurance races over long distances.

According to Fast Ladies, du Gast entered in her severely underpowered Panhard and started dead last of 122 entrants because it wasn't designed for racing. Despite that, the 20 hp machine powered her to take 33rd place overall (and 19th in the heavy class) with a time of 25 hours 30 minutes 23 seconds. And because the Baroness didn't finish, du Gast was the only woman to complete the journey. Still, her performance and her striking appearance earned her the titles of l'Amazone and The Valkyrie of the Motorcar.

Madame du Gast had the same attitude that most racers have today. If she wasn't first, then she was going to do better.

But things got difficult. Women weren't exactly welcomed in the racing world, less so in America than in Europe. She was able to finish a race from Paris to Vienna in 1902, but the governing body of a New York to San Francisco race wouldn't allow her to enter.

And then: scandal. In 1885, painter Henri Gervex unveiled La Femme au Masque, a risqué full-body image of a nude woman wearing a Domino mask to hide her identity. Rumour spread, and Camille du Gast's name became synonymous with the sexy portrait. Du Gast was already in court battling family legal matters, and the barrister representing her brother and father distributed copies of La Femme au Masque with the claim that this mystery woman was du Gast.

So, she had another battle to fight when she attempted to take Barboux to court. Both Henri Gervex and the actual model in the painting, Marie Renard, came to testify on du Gast's behalf, but she still lost the case. After the ruling, two of du Gast's close male friends got into a fistfight with Barboux and then were also prosecuted and fined. 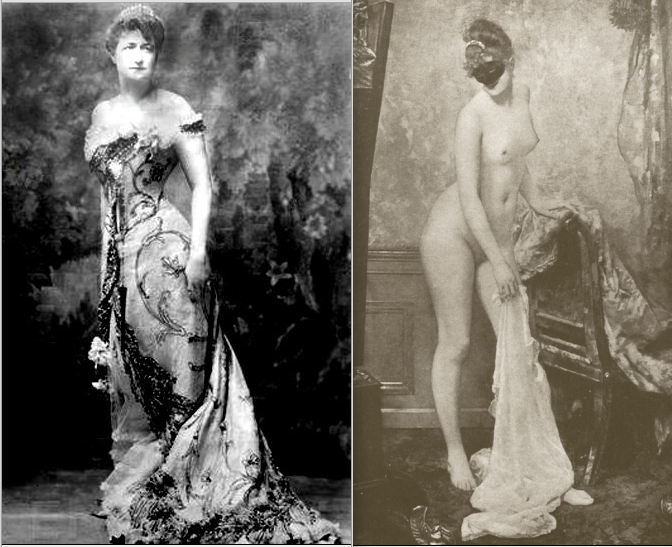 The scandal captured the imagination of the world, and newspapers in both New Zealand and Australia were reporting a nearly minute-by-minute update on the proceedings as soon as they received information. So, her name was in the mouths of many, although not in the way she might have liked.

In 1903, du Gast turned her attention back to racing and was allowed to compete in the Paris-Madrid race. Here, she was competing in a works 5.7 litre 30hp De Dietrich owned by Adrien de Turckheim. Known as the Race of Death, two drivers and more than six spectators were killed in an accident near Bordeaux (but no one actually recorded the true number of fatalities; it's likely far more than that). Du Gast had started 29th and worked her way up to 8th place, but her conscience wouldn't let her drive past her fellow De Dietrich driver, Phil Stead's, accident. She freed him from under his rolled car and took care of him until an ambulance came, when she restarted and reached 77th place by the time the race was stopped in Bordeaux.

Despite that, the French public were openly hostile to her and didn't believe a woman was capable of racing. The Autocar even went so far as to say that they didn't think "fierce long-distance racing is quite the thing for ladies", even though she had made an admirable showing in each race she entered and stomached the violence of a car accident before getting back behind the wheel. 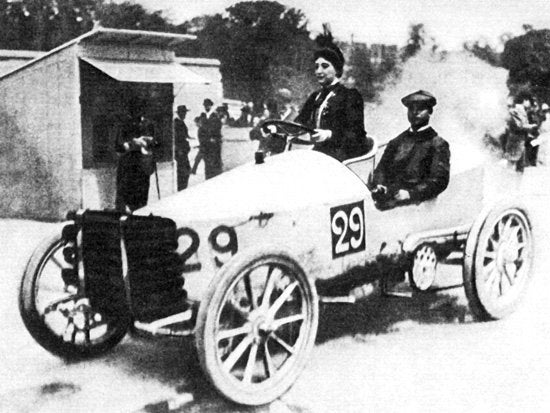 It started getting harder and harder to get a drive. The Benz factory team actually offered du Gast a race seat for the 1904 Gordon Bennett Cup, but the French government had already banned women from motorsport in an environment that was becoming more and more hostile to racing in general. In 1905, du Gast travelled to the Brighton Speed Trials to compete against Dorothy Levitt but her 35hp car was no match for Levitt's 80hp Napier.

So, du Gast got into boat racing. It was such a new sport at the time that no one blinked an eye at her or wondered about her "feminine nervousness". She got started in late 1904, where she attracted the eye of the media with her almost-severe dress: a tightly-cinched corset over her full-length leather coat, an elegant hat and veil, and gloves.

She didn't have much luck at first. She didn't finish races and was struck by a violent storm in the second stage of a race from Algiers to Toulon. All seven of the boats in the race were put out of commission, and six (including Camille, du Gast's steel-hulled motor boat) were sunk. Du Gast herself managed to leap overboard and was rescued. It took two months before they decided to declare du Gast the winner, since she had come closest to finishing before she was sunk.

Understandably, she was put off racing after that. Instead, she turned her focus on travel and government work. She was the first woman to travel across Morocco on horseback, an adventure she wrote about in an article called Ce que m'a dit le Rougi. In 1910 and 1912, the French government decided to commission her to visit Morocco again, where du Gast worked with the local women and handed out medicine and candy. The whole point was to help the French government gain more influence over the country, and du Gast said that she felt she had improved the image of France in the eyes of the local people. 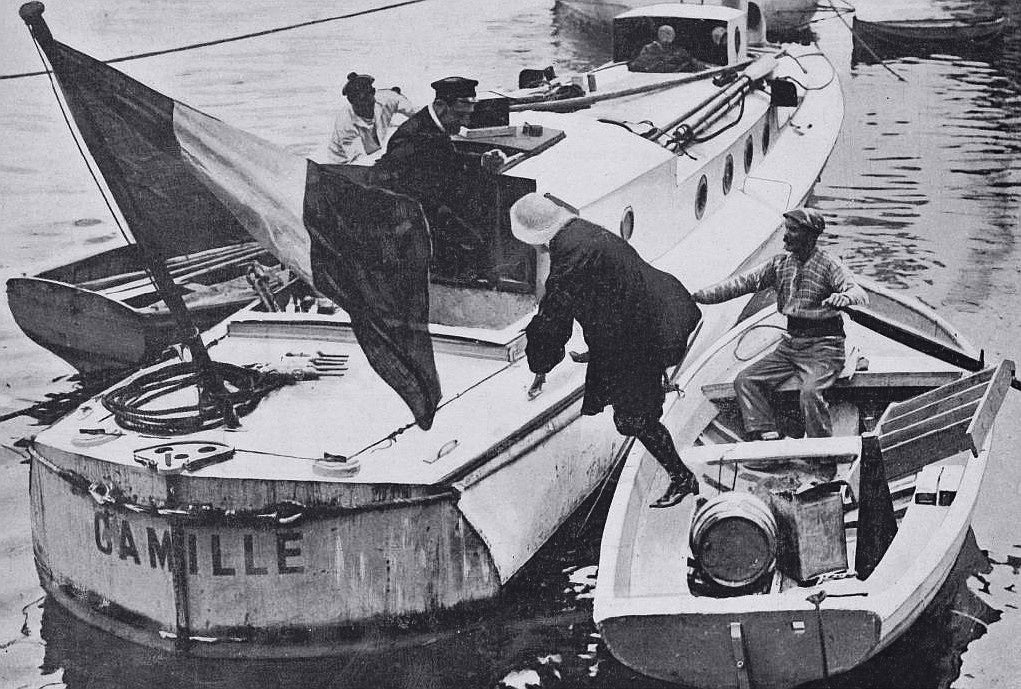 Interestingly, in 1910, tragedy struck du Gast. During one of her stays at her home in Paris, du Gast's own daughter attempted to have her killed by sending in assassins. Her daughter was jealous of her mother's success, according to Fast Ladies, and bitter that she was not as successful. Her constant failed attempts at extorting money from her mum had led her to desperation. Du Gast survived, however, simply by confronting them. They'd expected her to be asleep and ran the moment they found her awake.

Du Gast's entire world was changed after that. Instead of risking her life with dangerous travel or wild racing, she turned her attention to charity work instead. She took up work in a refuge for stray and injured dogs, served as president of the French Society for the Prevention of Cruelty to Animals for the rest of her life, donated her wealth to animal shelters, and actively campaigned against bullfighting. 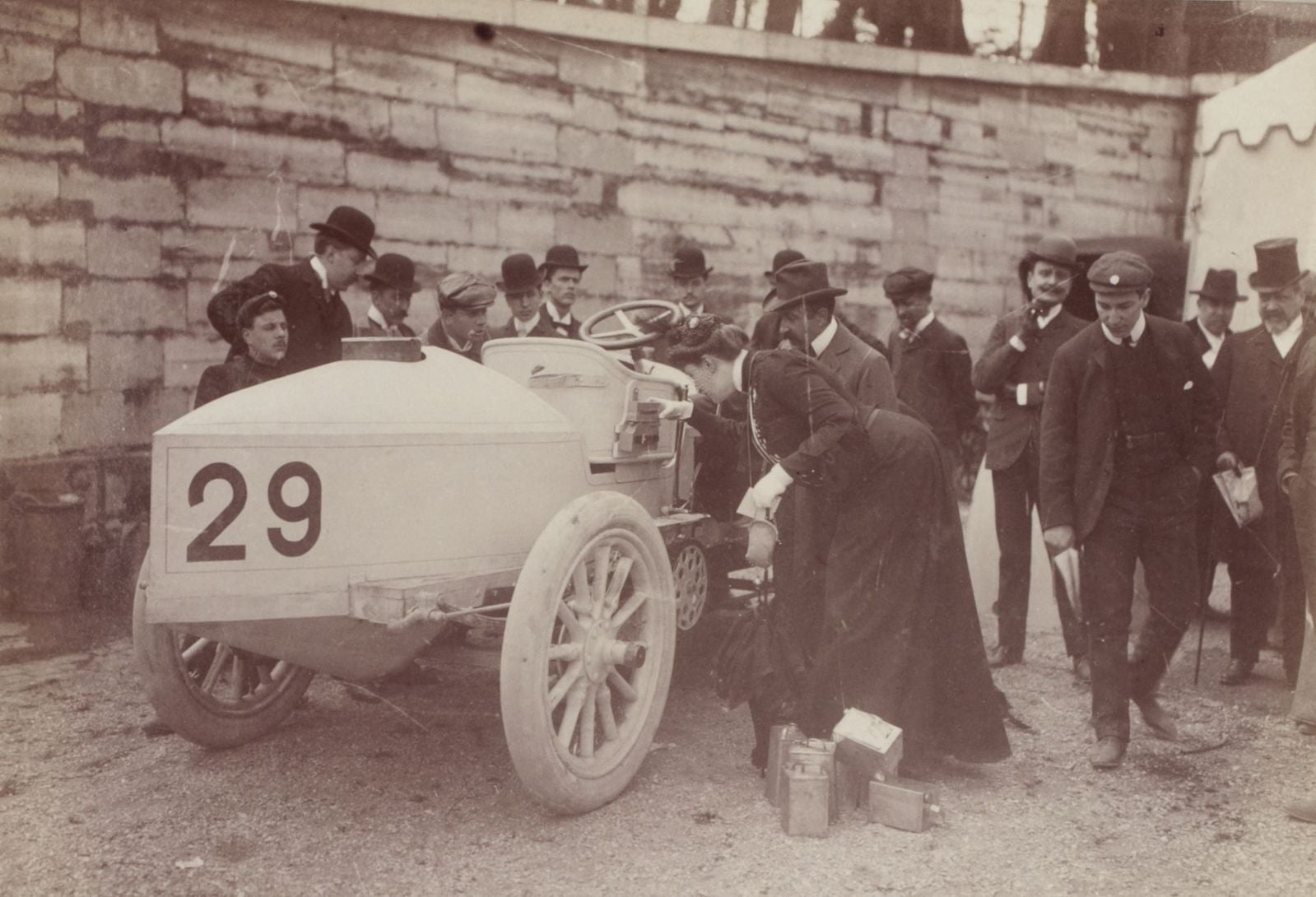 She still had a fondness for flair, though. In 1930, as bullfighters entered an arena in Melun, du Gast signalled for thirty young adults to leap into the arena blowing whistles. That, in turn, was the sign that 400 demonstrators should join them and set off multiple smoke bombs to inhibit the bullfight.

Around 1910, she began establishing centres for orphans and impoverished women, and focused on providing healthcare to women and children after Germany's occupation of Paris. Du Gast fought for the emancipation of women, becoming the vice-president for The French League for the Rights of Women after WWI, and was not afraid to have her voice heard. 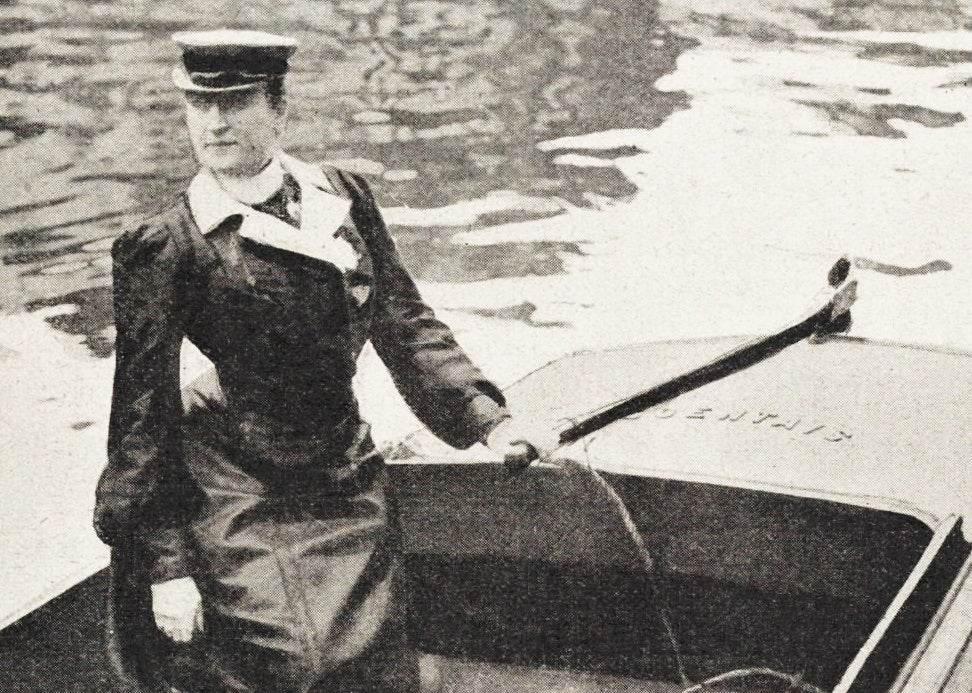 Camille du Gast devoted her life to the common good for over three decades, until her death in 1942. And while it's tempting to wonder how much more prominent of a figure in the racing world du Gast would be if women in sport and motor racing in general hadn't put a sour taste in the French government's mouth, her prominence as an activist in the years afterward left tangible effects on the fabric of French society that can't be overlooked.