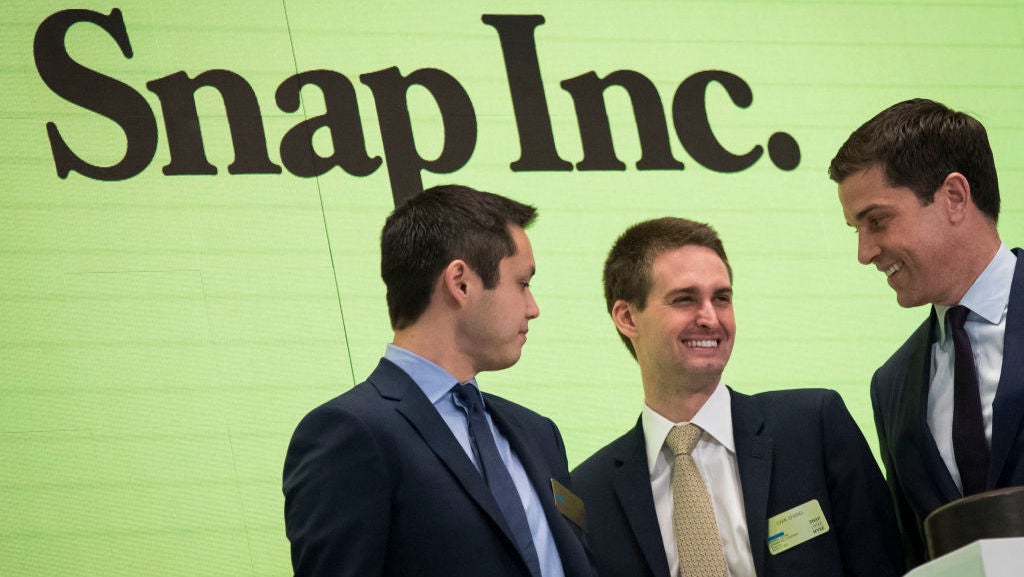 Snap’s stock price is now hovering around its lowest point ever since the company went public last year. Yet, its whiz-kid founder, Evan Spiegel, was 2017’s highest-paid CEO, taking home $US504 ($670) million. And according to a new report, Spiegel is almost single-handedly responsible for Snapchat’s biggest mistake.

When Snap’s IPO launched last Spring, it positioned itself as the company with the strongest hold on teenagers’ attention spans. Spiegel’s design ideas were considered essential to the company’s success and they also presented a problem: everyone kept stealing them.

Still, Wall Street was bullish on the company and Spiegel. He was granted a spectacular compensation package of 37 million shares of Snap that vested on the IPO date.

Since then, it’s been one disappointing quarter after another and the redesign that was supposed to be Snapchat’s big saving grace has been a disaster.

According to a new report, Spiegel made two mistakes in the redesign debacle: He started stealing other people’s ideas and he didn’t take the input of his colleagues. Apparently, the 27-year-0ld CEO was flying back from China when he abruptly decided to overhaul the service that counts 191 million daily active users. The Information reports:

Inspired by apps he’d seen in that country, Mr. Spiegel wanted to create a new version separating users’ friends’ content from the professional media. Each category would be sorted by an algorithm rather than Snapchat’s existing chronological feed. Huddling on the plane with one of his top designers, Will Wu, Mr. Spiegel hashed out a design for the future of the app.

When he got back to Snap’s California office, Mr. Spiegel ordered his design teams to make the changes — with little discussion of his reasoning… The Information has learned that Snap’s early user testing of the redesign showed mixed results. Some designers told the CEO they were hesitant about releasing it, but Mr. Spiegel decided to go ahead anyway.

The full report outlines a series of managerial disasters that mostly stem from a top-down process that excluded middle-management and left his team confused. It didn’t help that Spiegel apparently set a six-week timeline for the redesign because he wanted to be ready for Thanksgiving when people would be home for the holidays.

Around this time, Snap’s VP of engineering, Tim Sehn, left the company.

According to the report, team members would work on a piece of the project for a time, only to find out that someone else was working on the same thing. When one employee suggested they were going to schedule a meeting with Spiegel to explain the issues the project was facing, they were told by a manager that it was a bad idea.

The team missed its deadline, but the redesign did eventually launch in February. It did away with the chronological timeline that differentiated Snapchat from competitors. Many Facebook and Twitter users long for the days of a straight-forward timeline, but Snap decided to join those apps in algorithmic hell. But Snap also separated content from friends into one channel; and content from celebrities and brands into another.

This was all part of Spiegel’s plan to make the app easier for older users to understand. And it apparently worked; older people seemed to like it. But if you live by the fickle teenager, you die by the fickle teenager. Influencer juggernaut Kylie Jenner threw shade at the app, tweeting “does anyone else not open Snapchat anymore?

Or is it just me… ugh this is so sad.” Over a million users signed a petition demanding the company bring back the old design. Spiegel more or less told everyone they can fuck off and reminded them that celebrities aren’t their friends — precisely the illusion that Snapchat had worked so hard to create.

But with its user growth virtually flat and a shrinking user-base possibly on the horizon, the company has decided to start bringing back the old Snap.

Now, Snap says it hopes to bring in 2 billion users with an Android app that actually works. And it has a new version of the Snap Spectacles — this time, they’re virtually the same product that no one wanted.

Ev, my man, maybe it’s time to stop believing your own bullshit.