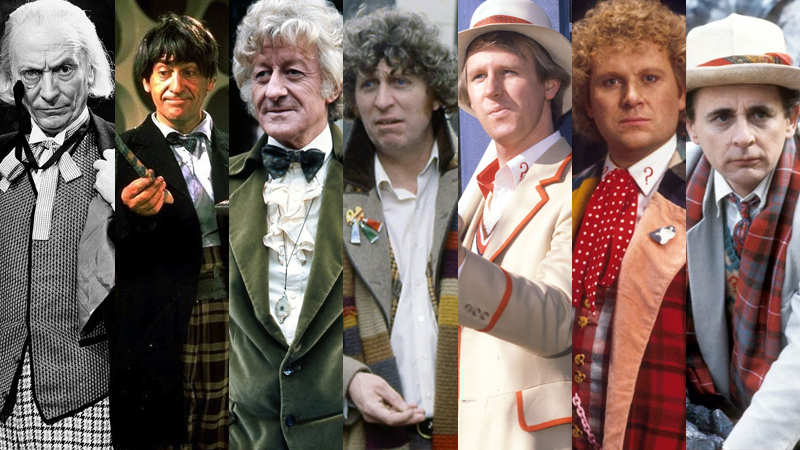 Today, Twitch begins a seven-week endurance run/celebration of all things old-school Doctor Who, live streaming over 500 episodes worth of adventures in Time and Space. Unless you happen to have seven weeks of free time starting imminently (in which case, I envy you), you likely can't sit down and watch all of it. So here's a few must-watch storylines to dive in for.

Given that 500-plus episodes is, well, a whole damn lot, in order to break this down into a more digestible format we'll be recommending a few choice selections for each of the first seven Doctors, as well as the times and dates they will be broadcasting on Twitch Presents over the next seven weeks. If you want to see the full schedule of stories that are airing and the time of each daily block they're in, you can check them out in both Pacific and GMT time-zone formats over at the official Doctor Who website here. 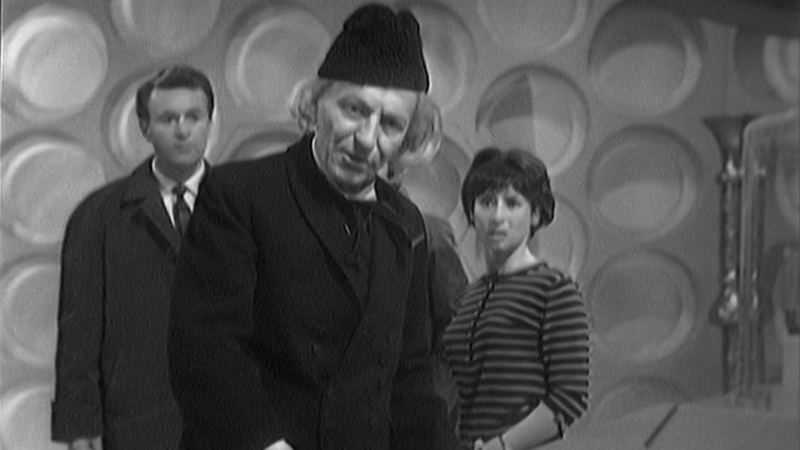 An Unearthly Child — The story that started it all is not actually that great — the first adventure, set in the stone age, is a bit plodding. But this is a piece of Doctor Who history that is delightful to experience if you've never done so before, and the actual first episode of mystery and setup in '60s London is majestic. (Air Date: May 29)

The Daleks — Speaking of history-defining: the Daleks' debut! They're creepy, they're shrill, and they're so utterly, utterly weird as the Doctor and his new friends find themselves on a strange world ravaged by terrible war. (Air Date: May 29)

The Dalek Invasion of Earth — That iconic shot of Daleks gliding menacingly across Westminster Bridge? It's from this utterly chilling alien invasion story, which truly catapulted the Daleks into full-on '60s "Dalekmania." (Air Date: May 31)

The Time Meddler — The Meddling Monk is never going to be listed at the top of anyone's "best Who villains" list, but this story is one of the first that actually really engaged with the internal logic and morality of time travel in Doctor Who, and the dangers of trying to use it to change the past. (Air Date: June 4) 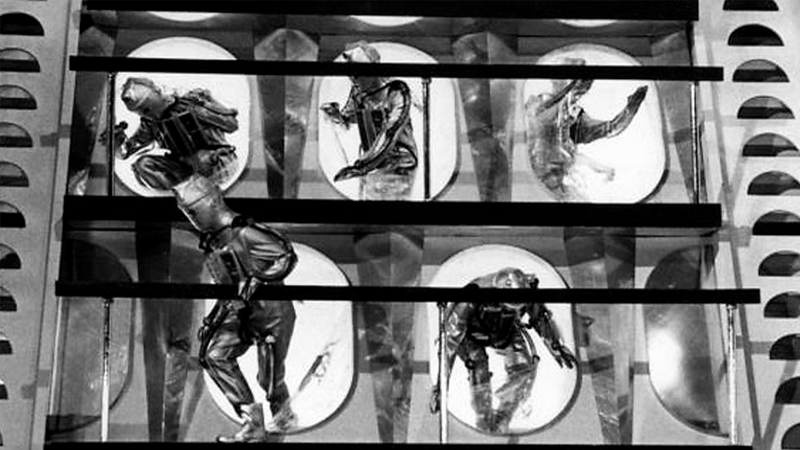 The Cybermen awaken from their cryo-slumber in "The Tomb of the Cybermen."Image: BBC

Tomb of the Cybermen — One of the all-time great Cybermen stories, this creepy, icy expedition into the heart of an entire structure of sleeping cyber-monsters is a case study in why the Cybermen are such a chilling concept. (Air Date: June 5)

The Ice Warriors — Speaking of ice, the Ice Warriors' famous debut is definitely worth a revisit if you've been fond of their recent appearances in the Peter Capaldi and Matt Smith stories. They're less brutish, honour-bound warrior-aliens here than they are in recent Who, but still just as sinister. Or ssssssssinister, rather. (Air Date: June 5)

The Web of Fear — This story was famous for being among the missing serials of early Doctor Who until a few years ago, and its recovery means you can now experience the bizarre dichotomy of some genuinely scary action sequences set in the bleak tunnels of London's underground rail network, as well as the Yeti, monsters who are really not creepy but instead absurdly, absurdly fluffy and kind of cute? (Air Date: June 6)

The War Games — This epic-length saga is a bit of a slog at times, but it's Patrick Troughton's final story as the Doctor, and it's the first time we get to see his fellow Time Lords... and learn what absolute arseholes they are. (Air Date: June 7) 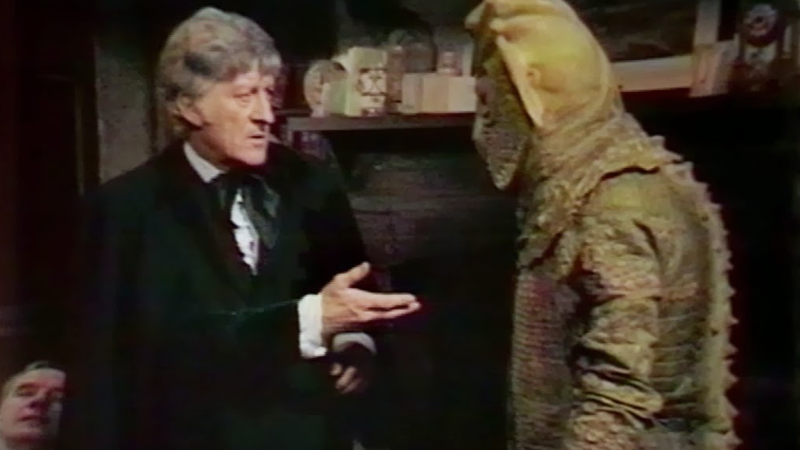 The Doctor meets a Silurian in "The Silurians."Image: BBC

The Silurians — The Silurians as monsters are not just great as a concept — an "alien" race that lived on Earth before humanity even existed, lying in wait for eons — but their debut story grapples with some really interesting moral quandaries for the Doctor and his relationship with UNIT. It also features a truly chilling twist about halfway through that is one of Doctor Who's scariest scenes. (Air Date: June 8)

Inferno — The Third Doctor slips into a parallel reality where all his friends are jerks and the Brigadier has an eyepatch and is forced to consider the end of not just this reality, but his main one. What more could you want!? (Air Date: June 11)

Terror of the Autons — The Master makes a spectacular debut here, the second-go for the Autons in the Third Doctor's era. It's a much better story for the plastic terrors here too, epitomizing some of Doctor Who's best scifi twists on everyday life. (Air Date: June 12) 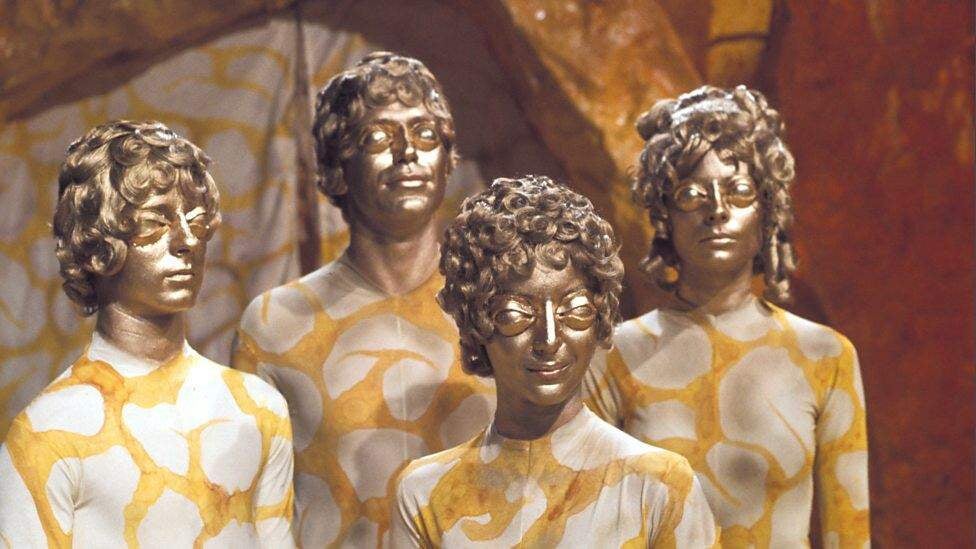 The benevolent faces of the Axons from "The Claws of Axos."Image: BBC

The Claws of Axos — Although this story is predominantly about handsome, gold-coated aliens who come to Earth in peace (only to turn out to be evil villains who are actually gross looking blobby-monsters), it's at its best focusing on the Doctor and the Master in a battle of wits with each other. (Air Date: June 12)

The Green Death — Most of this story about giant gross maggots and other bugs is a bit funky, especially if you're not too accustomed to old-school special effects work. But it's fondly remembered for the fact that it ends with an utterly heartbreaking farewell between the Doctor and his companion, Jo. (Air Date: June 19)

The Time Warrior — This story would be here even if it was simply just a great time-travel romp about an advanced Sontaran warrior being stuck in Medieval England. But it's also the debut of the dearly-missed Elisabeth Sladen as the one, the only, Sarah Jane Smith, one of Doctor Who's most beloved companions. And it's a damn good story for her to get going with. (Air Date: June 19) 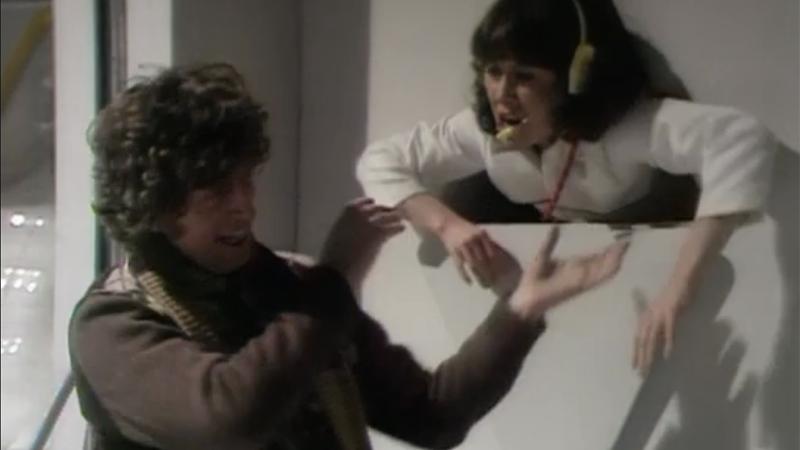 The Doctor helps Sarah Jane out of a vent in "The Ark in Space."Image: BBC

The Ark in Space — Tom Baker's debut story, "Robot," is a ton of fun, but he really gets going in this, his sophomore serial about the creepy Wirrn infesting a ship full of cryogenically frozen humans waiting out an apocalyptic event on Earth. (Air Date: June 21)

Genesis of the Daleks — If you've ever heard a thing about classic Doctor Who, you've probably heard about this, perhaps the greatest-ever story about the Daleks. The Doctor encounters the evil creator of his greatest foe, Davros, for the first time, but this entry excels for its moral core — sent back in time by his own people to prevent the Daleks from ever existing, does the Doctor have the right to do so? (Air Date: June 21)

Terror of the Zygons — Before they were brought back for modern Who, this was the only Zygon story, but it was the perfect example of why it was such a great injustice it took so long for the shapeshifting, sucker-covered aliens to come back... if you ignore the very dodgy Loch Ness Monster creature. (Air Date: June 22)

Pyramids of Mars — The Doctor and Sarah Jane confront the ancient evil god Sutekh, one of the show's best-ever one-off villains. This one also includes some genuinely creepy henchmen in the form of Sutekh's mummy-bots, who team up to crush a man between their ginormous chests in a genuinely grim scene. (Air Date: June 22) 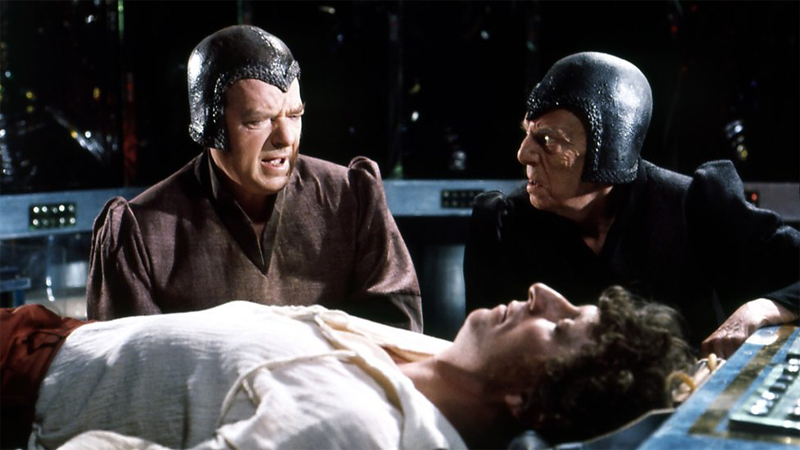 The Deadly Assassin — The story that shook up the Time Lord mythos again, this is primarily about the return of the Master and is known for being a story without companions. But it's full of delightful intrigue and Time Lord politics that let Tom Baker turn in a wild and wonderful performance. (Air Date: June 26)

The Robots of Death — The Doctor and his aggressive warrior-friend Leela find themselves caught up in a Robo-revolution. Worth it alone for the amazingly glam robot designs, but it helps that it's a cracking murder-mystery tale too. (Air Date: June 27)

The Horror of Fang Rock — Set entirely in a small, dark lighthouse, this grim tale features the blob-like Rutans, a long time foe of the Sontarans, slowly but surely picking off members of a small group of survivors as the Doctor races to defeat them. (Air Date: June 27)

City of Death — Douglas Adams' most famous story, this is an all-time Doctor Who classic. Delightful banter, time-hopping shenanigans, sumptuous location footage shot in Paris, and a great, hammy villain in the form of Julian Glover's Scaroth, last of the Jagaroth. One of the greatest Who stories ever. (Air Date: July 4) 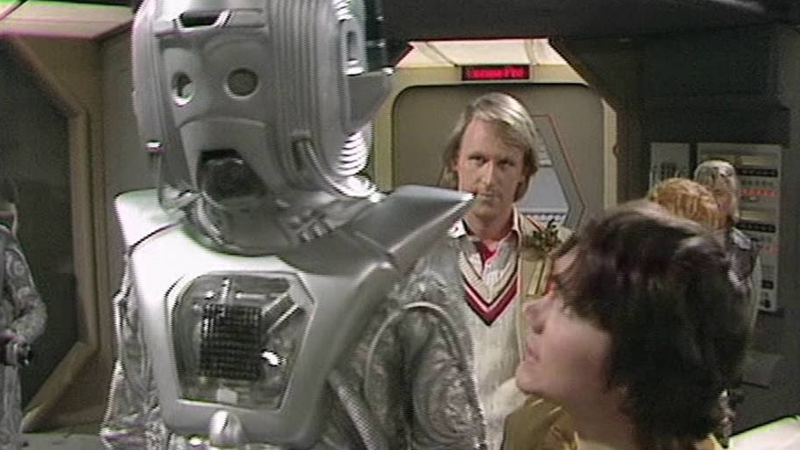 The Cybermen overtake a ship destined to change the future in "Earthshock."Image: BBC

Earthshock — The Cybermen of the '80s were a little more... bombastic than their chilling prior forms, but this excellent story is driven by the fact that it ends with one of the Doctor's companions, Adric, making the greatest sacrifice in order to save the day. Yes, Adric sucked, but it was still pretty sad! (Air Date: July 10)

Kinda and Snakedance — This pair of stories about a giant psychic snake called the Mara is let down by some rather dodgy snake effects (we don't know if Twitch will use the updated digital effects made for the stories' home releases), and the first story is a bit of a drag. It's on this list for the second Mara tale, "Snakedance," which sees the Doctor's companion Teagan forced to reckon with the trauma she went through thanks to the Mara's enthrallment of her in "Kinda," in a rare bit of follow-up storytelling. (Air Date: "Kinda" on July 9, "Snakedance" on July 11)

Enlightenment — A wonderfully weird costume drama set on solar-sailed spaceships — of the literal "ships in space" variety — filled with telepaths, creating some truly lush visuals that the actual story itself can never quite really live up to. (Air Date: July 11)

The Caves of Androzani — Often seen as one of the, if not the, best Doctor Who tales ever told. The final story of the Fifth Doctor's run sees him doomed to death from the get-go, and is all about the Doctor choosing to go down in his final hours doing what he does best — facing villains, saving lives, and giving everything he can to keep his best friend Peri safe. (Air Date: July 12) 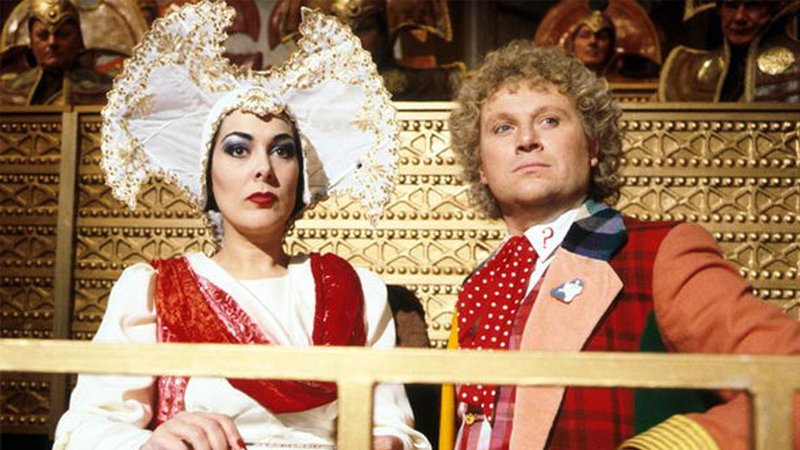 The Trial of a Timelord — Twitch isn't actually showing some of the better stories in Colin Baker's tumultuous reign as the Doctor; I have a soft spot for "Revelation of the Daleks," which is about the galaxy's greatest terror running a funeral home that's secretly converting corpses into fresh Daleks! But there is a whole day dedicated to one of classic Doctor Who's boldest experiments, season 23 — a series of four loosely interconnected separate stories revolving around the Doctor being put on trial by his own people (and, twist, an evil future version of himself). (Air Date: July 18) 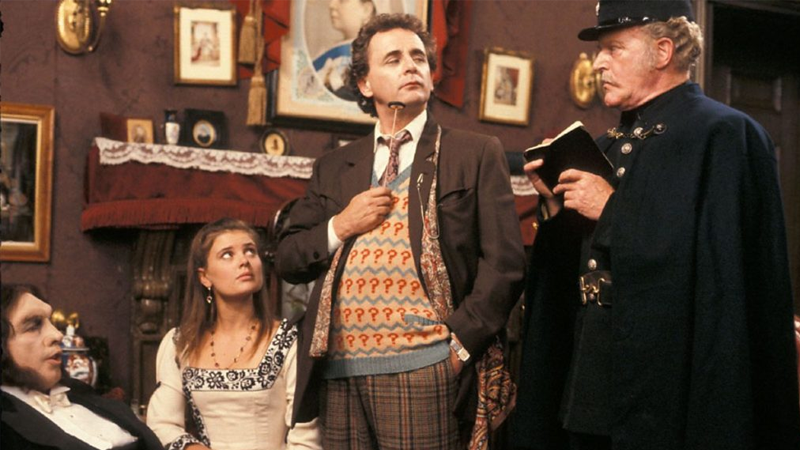 Ghost Light — The actual story of "Ghost Light" absolutely does not live up to its gorgeous Victorian horror house environs, but it's the relationship between Ace (often seen as a prototype for Modern Doctor Who's take on the companion role) and the Doctor that makes this excellent viewing, as the Doctor pushes Ace to confront her childhood fears. (Air Date: July 20)

The Curse of Fenric — Featuring not only some really creepy looking watery-vampires called the Haemovores, this serial is one of the defining moments in the Seventh Doctor's darker turn, revealing just how far he's willing to manipulate his closest friends to confront the terrible threat of the titular Fenric. (Air Date: July 23)

Survival — The very last story of classic Who is worth a watch simply for that historical footnote. It offers another great story for Ace, although it features some slightly off-looking furry cheetah-monsters that take the wind out of its sails a bit. (Air Date: July 23)