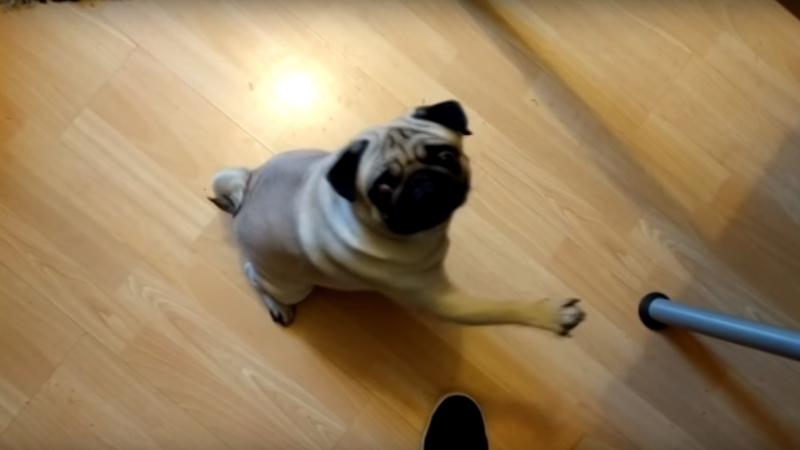 Last month, Scottish YouTube comedian Mark Meechan was found guilty of a hate crime after posting a video of his girlfriend’s pug Buddha raising its paw to the words “Sieg Heil”. Though Meechan argued that the motivation behind the anti-Semitic video was simply to prank his girlfriend, he has been fined £800 – or about $1467.

“The fact that you claim in the video, and elsewhere, that the video was intended only to annoy your girlfriend and as a joke and that you did not intend to be racist is of little assistance to you,” Sheriff Derek O’Carroll said, according to a BBC report.

Meechan, known on YouTube as Count Dankula, posted a video of the dog watching Adolph Hitler at the 1936 Summer Olympics in Berlin. Buddha becomes visibly alert when Meechan says “gas the Jews”, and raises his paw when he hears “Sieg Heil”, the salute of the Nazi party. You can also hear Meechan tell the dog, “Who’s a good wee Nazi!” The video, posted in April of 2016, was viewed over three million times.

Meechan, who was supported during his sentencing by Tommy Robinson, the former leader of far right protest movement English Defence League, plans to appeal his sentencing. He doubled down on the fact that the video was just a joke, noting “the juxtaposition of having an adorable animal reacting to something vulgar”. He also argued it was a “really dangerous precedent to set” for free speech.

But Sheriff O’Carroll found the video “grossly offensive”, and didn’t believe the racist and anti-Semitic video was simply a ploy to piss off his girlfriend. “The description of the video as humorous is no magic wand,” O’Carroll said. “This court has taken the freedom of expression into consideration. But the right to freedom of expression also comes with responsibility.”

Of course, an unwitting pug tricked into paying tribute to the Nazis is far from the most offensive content posted on YouTube. But it’s a reminder that hateful content, while not permitted on the service, is still flying under the radar of moderators. It’s also a reminder that there are no bad dogs, just bad humans.