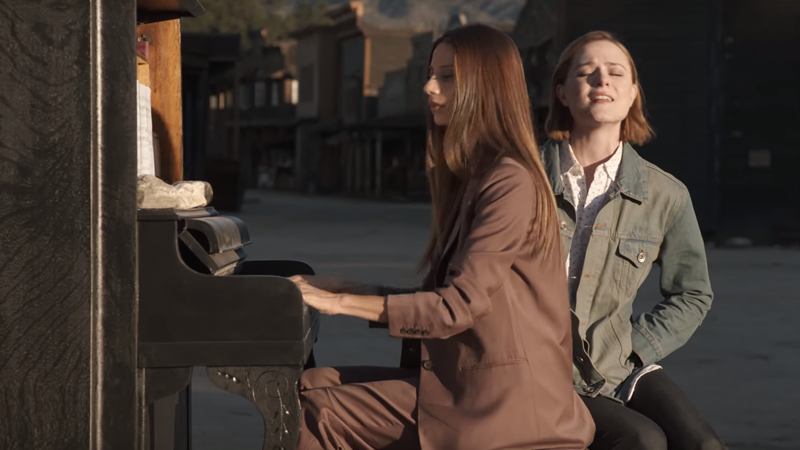 Yesterday during a Reddit AMA, Westworld co-showrunner Jonathan Nolan made a bold statement: In an attempt to stop spoilers from ruining fans' enjoyment of the show's upcoming second season, the creative team would release a video detailing the entire plot of the season to select fans. The video is here and... it isn't that.

Evan Rachel Wood stars in a scene that will likely not be a part of Westworld season 2. Image: SingingTraveller047 (YouTube)

Nolan's original response alleged that such a video - detailing the twists and turns of the entire season - in the hands of a select few fans could lead to what fans of George R.R. Martin's A Song of Ice and Fire books had done for the first five seasons of Game of Thrones, creating a small circle within Westworld fandom that would protect the larger community from being spoiled with the knowledge a select few would learn. It was all very dramatic, and plenty of discussions arose around Nolan's belief in a detrimental link between fan theories and spoiler culture in general. But given that it was coming directly from Nolan himself, even if the idea sounded entirely bonkers, there was at least an assumption that maybe this plan could possibly be legit, and perhaps even lead to a shift in TV-watching culture.

That is, until a few hours after the AMA concluded when a mysterious YouTube channel under the name "SingingTraveller047" released a video purporting to be the alleged season two spoiler guide:

The video features actors Jeffrey Wright and Evan Rachel Wood in character as Bernard and Dolores, and starts off with an already pretty weird vibe... until Wood, suddenly out of costume, breaks into a very Westworld rendition of Rick Astley's "Never Gonna Give You Up", the trolling anthem of choice for the mid-'00s internet. But that isn't all. Twenty-two full minutes of the 25-minute-long video also features a dog sitting in front of a piano, if you hadn't already gotten the hint that this was not entirely serious.

Yes, it's April 11 in the year of our Lord 2018, and Westworld is trolling us all. A move that might had seemed a bit more inspired if it had come, say, nine days ago, but now? It's just very, very weird (perhaps even a bit mean) - and arguably weirder than dropping a primer full of spoilers for a TV show that hasn't aired yet.

Westworld returns to showcase on April 23. It has not yet been confirmed if the sad piano-playing dog will be reprising its role in the new season, unfortunately.

Andrew Liszewski 07 Apr 2020 10:30 PM
Little did we all know just how much time would be spent in video conference calls as part of work from home life. Creative Technologist Matt Reed has already reached his capacity for Zoom meetings, so he created an AI-powered digital twin that can sit in on calls for him, complete with voice-activated automated responses.