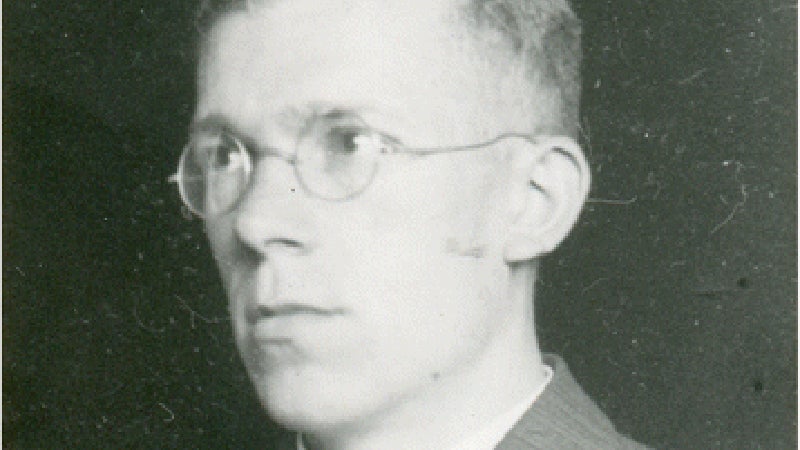 The term “Asperger’s syndrome” will never be heard the same way again, owing to new research showing that Hans Asperger – the Austrian pediatrician for whom the disorder was named – was an active participant in the Nazi eugenics program, recommending that patients deemed “not fit for life” be sent to a notorious children’s “euthanasia” clinic.


New research published today in the science journal Molecular Autism shows that Asperger wasn’t the man he led the public to believe he was. That he worked among the Nazis is no secret, but after the Second World War he said he was no friend of the Nazis. He even claimed that he was hunted down by the Gestapo for refusing to hand over profoundly disabled children. But new work by Herwig Czech, a historian of medicine at the Medical University of Vienna, says there’s no evidence for these claims, and that the popular conception of Asperger is false. The brutal reality, according to Czech, is that he was both a Nazi sympathizer, and a medical doctor who “actively contributed” to the Nazi eugenics program.

To reach this conclusion, Czech poured through previously unexplored archival documents, some of which were thought to be destroyed, including Asperger’s personnel files and the clinical evaluations he wrote for his patients. The historian also looked at contemporary publications to see where the false idea that Asperger was an opponent of National Socialism came from.

Asperger, who died in 1980, worked at the University of Vienna’s Pediatric Clinic during the war. Evidence uncovered by Czech shows that Asperger collaborated with the Nazis during this time by directly and indirectly referring profoundly disabled children to Vienna’s Am Spiegelgrund – a children’s clinic where, from 1940 to 1945, nearly 800 children were killed as part of the Nazi Children’s Euthanasia Program, or Aktion T4 as it was also known.

According to Czech, Asperger knew exactly what was going on at the clinic – that children were being murdered as part of the Nazi eugenics program. Motivated by Hitler’s fanatical racial ideology, the Nazis actively sought to create a genetically “pure” society by practicing so-called “racial hygiene,” which included the elimination of lives deemed too burdensome to the state, or those deemed “not worthy of life.” At Am Spiegelgrund, children were killed by deliberate starvation or through the lethal injection of drugs. Ominously, and in a cynical admission of its moral bankruptcy, the Spiegelgrund clinic listed the cause of death as “pneumonia.”

As Czech writes in his new paper, Asperger repeatedly accommodated the Nazis, and he was “rewarded for his affirmations of loyalty with career opportunities.” He joined several organisations affiliated with the Nazi party, though he never became an official member. Asperger “publicly legitimized race hygiene policies including forced sterilizations and, on several occasions, actively cooperated with the child ‘euthanasia’ program,” Czech writes. Documents uncovered by Czech demonstrate Asperger’s publicly stated positions on such matters, in which he called for the “responsible implementation” of sterilization, for example. And in 1942 he referred a 15-year-old deaf-mute boy to the Health Office’s Department of Hereditary and Racial Care, an act that initiated “a sterilization procedure on the grounds that the condition appeared to be hereditary.”

The language Asperger used to diagnose his patients was often “remarkably harsh,” even when compared to the language used by his colleagues at Am Spiegelgrund. Take the case of five-year old Elisabeth Schreiber, for example, whose diagnosis from Asperger read:

Erethic imbecility, probably on a post-encephalitic basis. Salivation, ‘encephalitic’ affects, negativism, considerable language deficit (is now slowly starting to speak), with relatively better comprehension. In the family, the child is without a doubt a hardly bearable burden, especially under their crowded living conditions, and due to her aggressions she endangers the small siblings. Therefore it is understandable that the mother pushes for institutionalization. Spiegelgrund would be the best possibility.

Elisabeth was sent to Spiegelgrund in March 1942. According to Czech, “One of the nurses wrote that she was friendly and affectionate but that she spoke only one word: ‘Mama.’ She died of pneumonia – like… so many other children at Spiegelgrund – on 30 September 1942, shortly before her sixth birthday.”

Asperger’s descriptions of his patients directly contradicts the notion that he “tried to protect the children under his care by embellishing their diagnoses,” writes Czech. During a 1974 interview, and in an apparent attempt to cover his complicit arse, Asperger said:

It is totally inhuman – as we saw with dreadful consequences – when people accept the concept of a worthless life. […] As I was never willing to accept this concept – in other words, to notify the [Public] Health Office of the mentally deficient – this was a truly dangerous situation for me.

Based on the available evidence, Czech says it’s impossible to know if Asperger refrained from reporting some children who met the criteria for euthanasia. “However, it is documented that he personally referred a number of children to the Spiegelgrund ‘euthanasia’ facility,” he writes in the study.

In 1938, Asperger coined the term “autistic psychopaths” to describe a group of children with distinct psychological characteristics, including issues with social communication, repetitive and restrictive patterns of behaviour, and learning difficulties. In 1944, he published a comprehensive study on the topic as part of his postdoctoral thesis. His idea gained worldwide attention when, in 1981, the late Dr. Lorna Wing coined the term “Asperger’s Syndrome” to formally describe the condition. In 2012, the American Psychiatric Association officially removed Asperger’s Syndrome from DMS-V, the so-called bible of psychiatry. Instead, psychiatrists were told to classify it as a form of autism.

Update: As a relevant aside, a new book by Edith Sheffer, titled “Asperger’s Children: The Origins of Autism in Nazi Vienna,” is in agreement with Czech’s findings. In a Molecular Autism editorial, the authors write:

Sheffer argues that Asperger may have been sympathetic to the Nazi goal of eliminating any children who could not fit in with the Volk, that is, fascist collectivism and the creation of a homogeneous Aryan people. In 1938, the Dean of the Medical School removed more than half of its faculty, predominantly Jewish doctors. In contrast, at the age of 28 Hans Asperger had enjoyed premature promotion to be Director of the Curative Education Clinic.

Sheffer describes how, under Hitler’s regime, the profession of psychiatry that previously had been based on compassion and empathy became part of the eyes and ears of the Third Reich. Under the direction of Public Health Officials, professionals went into homes to index and classify every child as genetically fit or unfit, and assigning diagnostic labels that would ultimately determine who would live and who would be killed.