Steganography is a marvellous concept. Far from being the study of stegans (you know who you are), steganography basically means hiding one thing inside something else without disturbing it. In the digital word, this could mean embedding text inside a video file in such a way as not to corrupt the video itself. Or, in Ben Cox’s case, stuffing secret bytes within a dubstep song. 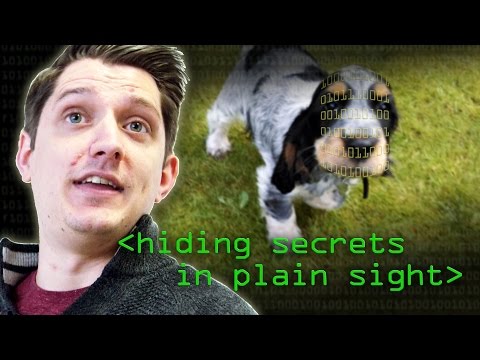 The Science Of Hiding Secret Messages Inside Regular Images

It's been said that hiding something in plain sight is the best way to keep said thing a secret... as long it's not an elephant in the middle of Federation Square. For instance, did you know you can stash the entire works of Shakespeare in a (sufficiently-sized) JPEG and no one would be the wiser by simply looking at the image?

Cox selected Skillrex’s “Right In” as his tune of choice and, after generating a spectrogram, noticed that a lot of the sounds in the 0-100Hz range were inaudible — the perfect place to put information.

The first step was to clear out the noise below 100Hz, which Cox achieved using the band-filtering tools of a command line program called Sox.

Here’s a before (left) and after (right) comparison. Note the missing orange data (which is zero decibels, or close to it) at the bottom.

With space made in the track, Cox wrote an encoder and decoder scripts to read in data, write it to the lower bands and of course, decipher it:

This decoder works by counting how many samples in a “frame” are negative, and based on that declaring if it’s a 1 or a 0 bit.

Not exactly an audible way to do subliminal messaging, but a great way to send secret information to your Skillrex-loving spies in the field.