Careful, Legion, The Calls Are Coming From Inside The Brain 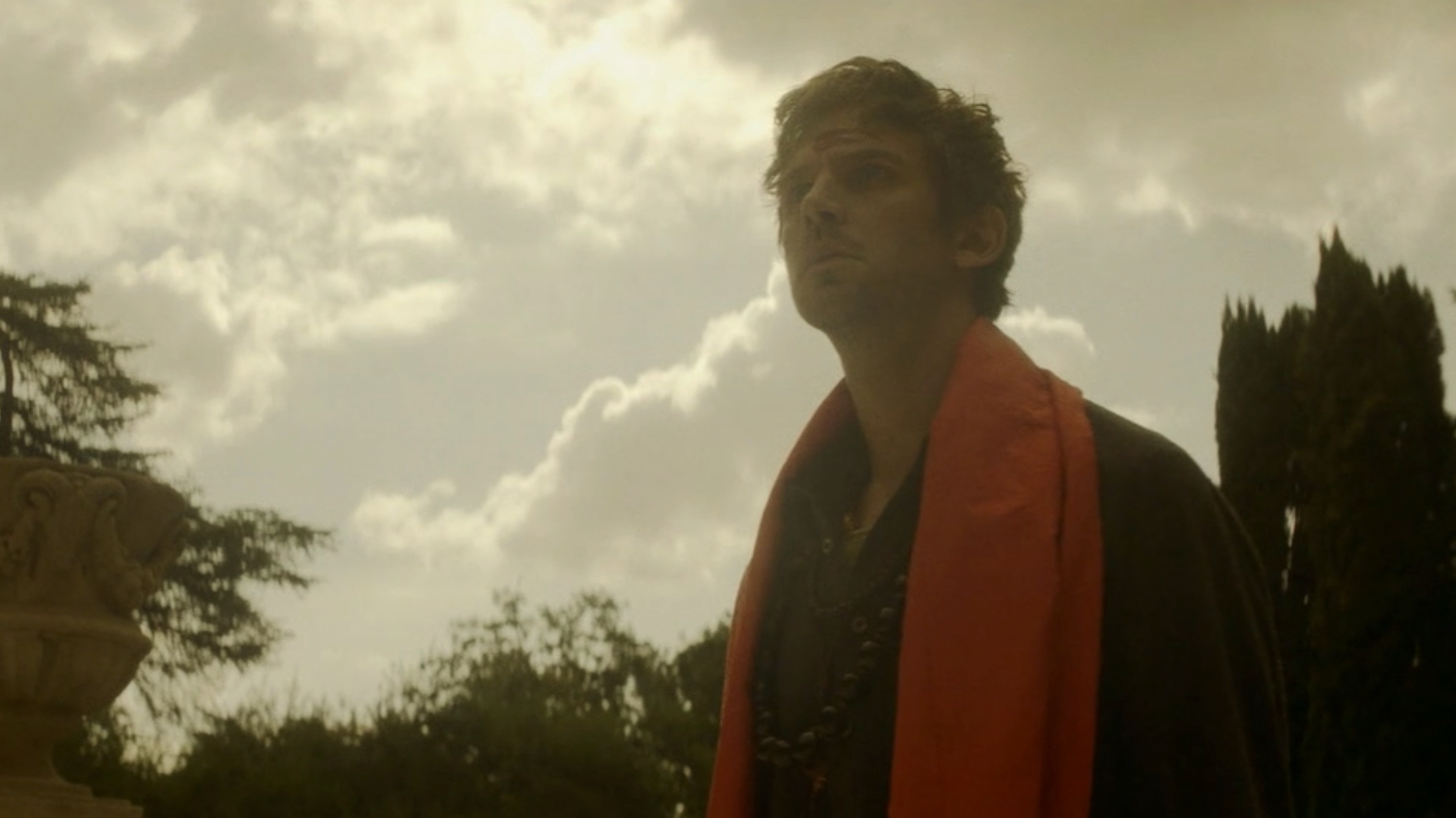 The latest episode of Legion is a mind trip. OK, sure, that’s like saying water is wet – Legion is always trippy – but this one actually goes inside the minds of characters other than David, stripping away their layers and abilities to show them at their most basic core. This episode also has what could be one of the greatest flashbacks I’ve ever seen on television.

In “Chapter 11,” David (Dan Stevens) and Syd are on the hunt for the monk of the Mi-Go Order, with Syd taking on the form of Earth’s most-vicious hunter: a cute kitty cat. As she wanders the halls of Division Three’s headquarters – which I’ve coined the Honeycomb Hideout – she comes across an emergency situation. The monk was hiding in plain sight among the other Catalyst victims, and is now on the loose. As the Honeycomb Hideout is placed on lockdown, David heads into the astral plane to ask Farouk for his help locating the monk, since the monk is able to shield himself from David’s mind.

Here we get an excellent scene between David and Lenny, still trapped in Farouk’s mental clutches. She yearns for something – sex, drugs, death – anything to break free of this stylish hell she’s stuck inside. Lenny tries and fails to die multiple times as David chats with Farouk about the monk. Farouk doesn’t care. Then again, neither does David. Pretty telling, if you ask me. Not gonna turn around there, David? Maybe look to the left a bit?Image: FX

It’s really hard to feel sympathy for someone like the Shadow King, who preyed on David for his entire life and now has taken refuge inside Oliver’s head. But here, Farouk makes a pretty damn good case for why he’s not the villain David thinks he is — first comparing David’s father Charles “Professor X” Xavier to a colonizer, “a white man” who removed him from his throne without caring about the ramifications, and then presenting himself as a refugee who only hops from body to body in order to survive. The Shadow King might be an irredeemable monster, but he does not like being called a villain. I may not agree with Farouk, and I still think he’ll say anything to get what he wants, but he’s not bad at making his point.

As David leaves the astral plane, no closer to a solution to his monk problem than he was going in, Farouk lays a truth bomb on him: He’s not responsible for spreading the Catalyst that renders people paralysed (other than their chattering teeth), the monk is. After finding Cary, the only other adult survivor in the whole Honeycomb Hideout, David goes out in search of Syd, whose future self is projecting a message of “HURRY” to prevent her present self from being trapped inside her own mind. You see, the Catalyst creates a maze inside the brain, where victims retreat into a place dominated by their core needs and desires. Ptonomy, the first victim David finds, yearns to be in a world where he can forget (reminder: his ability is photographic memory). 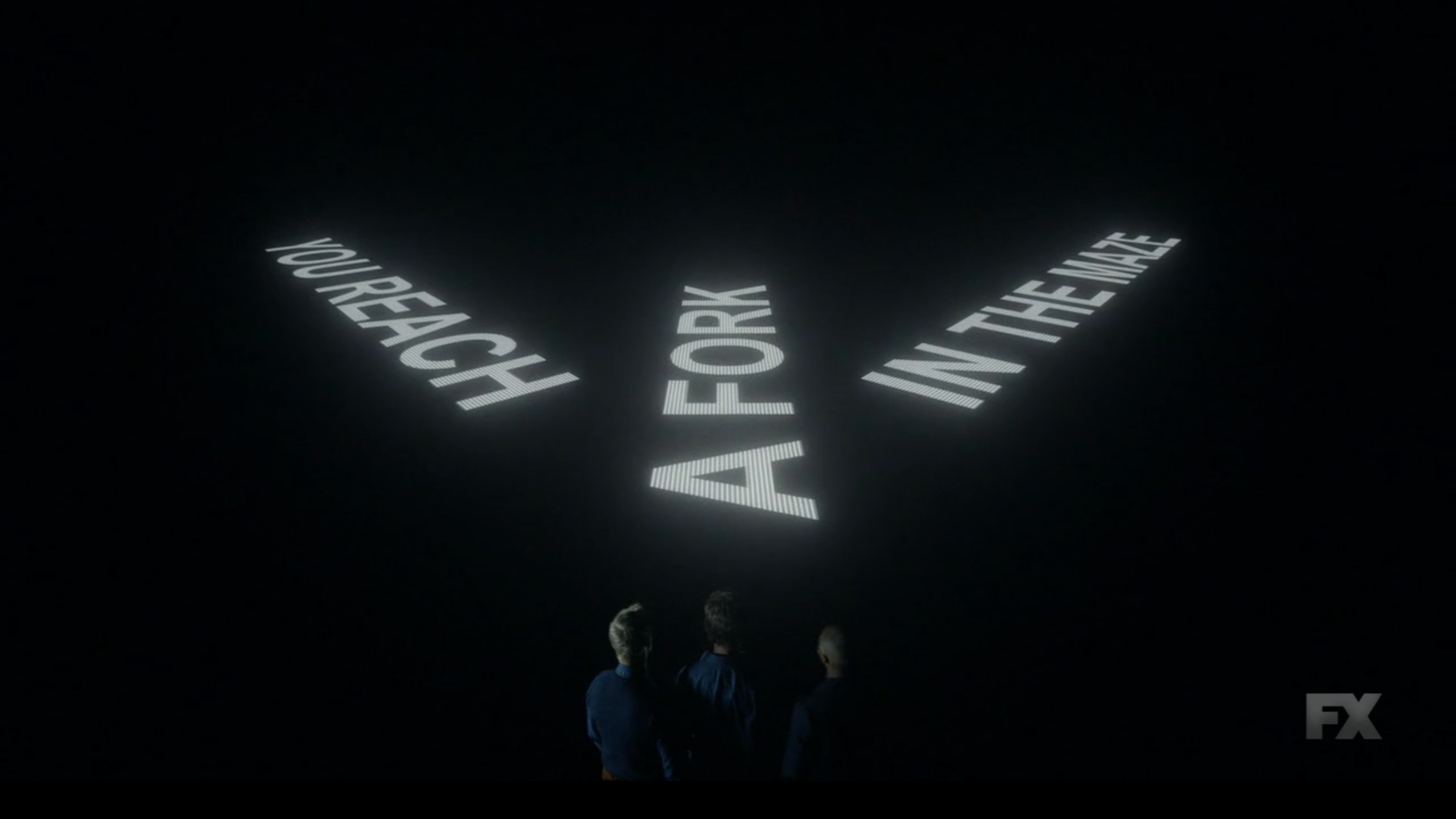 “You reach a fork in the maze.”Image: FX

Then, we enter Melanie Bird’s maze, presented as a text adventure game where Melanie is in complete control. It’s a fantastic sequence that turns words into works of art – and I can’t resist loving any show where characters shout command suggestions at each other like “climb down the ladder” or “no, look around first.” We also see the return of that weird monster-on-wheels thing from Melanie’s vapour vision, which is referred to in-game as a Minotaur. David tries and fails to force Melanie out of her mind maze, but the only way out is to play. Her game, her rules. So he sits at the computer and tells her a story, one that reflects where she’s been and what she’s always wanted. I transcribed it because I can’t do it justice:

once upon a time

there was a girl with no dreams

she lived in the right now

then she met a boy

and his dream became hers

except what he didn’t realise

was she already had a dream

and that dream was to

David doesn’t have long to celebrate this victory of empathy before he’s apprehended by the monk and forced to journey into his mind, to learn the tragedy that befell his order. This whole flashback only takes up a few minutes of the episode, but it’s incredibly evocative. It not only succeeds in introducing us to the Mi-Go Order and their connection to Farouk, but it also create feelings of tension, anxiety, and dread that I’m unable to shake. 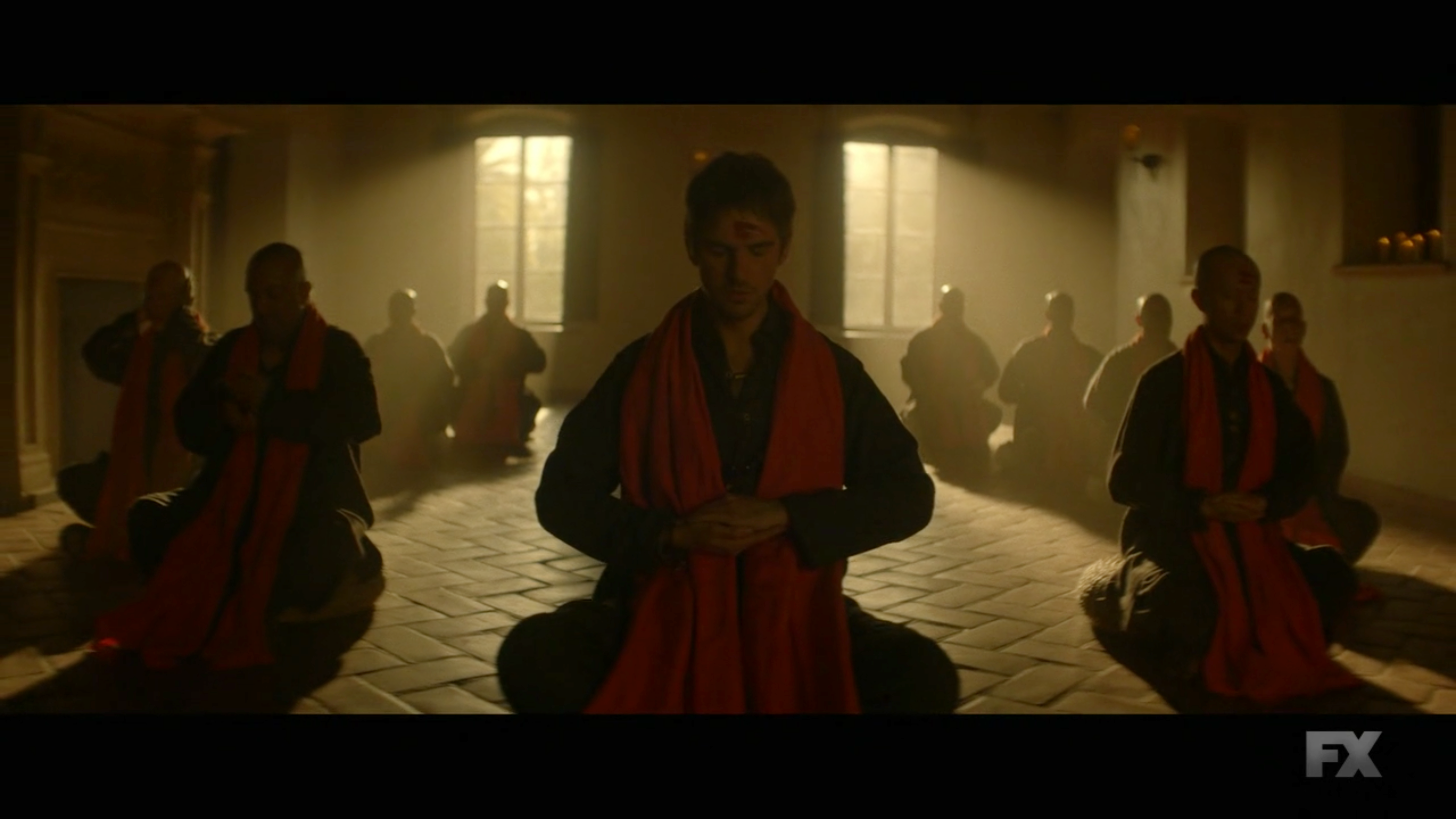 David steps into the mind of a monk, but it’s not peaceful.Image: FX

Earlier in the episode, we’d gotten a biref glimpse at how Farouk was defeated, leading to his body being taken to the monastery of the Mi-Go Order. Unfortunately, Farouk’s body cannot be killed — so it doesn’t take long before the pounding begins. A slow, methodical thump that not only resonates throughout the entire monastery, but also appears to invade their minds. Slowly, the monks begin to go mad, some going so far as to hang themselves to escape the constant and consistent noise. Those that remain fall victim to the Catalyst. In the same vein as the cheerleader “tic” story narrated by Jon Hamm, their minds create a physical reaction that begins to spread. The only one unaffected is our monk – who, in the final moments of the flashbacks – chooses to leave his brothers behind.

The lone survivor of a tragedy his order did not sign up for, the monk takes control of the admiral to demand the “weapon” that can defeat Farouk. The admiral’s collective insists the weapon does not exist, but Melanie believes that it’s David. However, the monk knows the truth: David is helping the Shadow King. Before he can spill the beans, David transports the two of them to the roof of the Honeycomb Hideout so he can demand the location of Farouk’s body. But the monk can’t share that. He knows that would mean the end of everything, and that all his brothers had sacrificed would have been in vain. He’d rather die, which he does by jumping off the roof, in a heartbreaking end to an even more heartbreaking story. These monks lost everything to fulfil a promise – and in their final moments none of their actions mattered, as the key to fixing everything had already betrayed them.

The episode ends with David travelling inside Syd’s mind in order to save her, with the next episode looking to spend a lot of time exploring Syd’s life and story – which is overdue, in my opinion. It’s still hard to say who’s in the right here, as even David begins to doubt whether future Syd is everything she claims to be. But it’s clear he’ll do anything for love, even if it kills everyone else.

Meanwhile, the ceaseless thumping of Farouk trying to escape his coffin is still resonating in my head, even now.