There’s a viral video making the rounds showing the site of an apparent crashed UFO on the remote island of South Georgia. On closer inspection, however, the object’s true identify is something considerably more banal: It’s just a stupid rock that fell from a nearby mountain.

The video was produced by Secureteam10, and it’s amassed 1.68 million views since being posted on March 3. It claims to show a UFO that crashed on South Georgia, which is located about 4150km from the Antarctic Peninsula. “Unknown Object Leaves Trail of Mystery in Antarctic,” proclaims the introductory text, as if we’re watching a trailer for John Carpenter’s The Thing.

Using Google Earth, the video’s narrator, Tyler Glockner, takes us on a journey in-and-around the purported crash site, saying the snow-covered object appears “to be some sort of massive, elongated or cigar-shaped object that at some point – and we don’t know when – came to a screeching halt in the snow leaving behind it almost a thousand-metre-long trail.”

He points to “some damage that has been done to the side of [a nearby mountain] where we can see this wave of debris extending outwards from the mountain itself, with the main object and trail coming out of it, smashing its way in a very sharp trail,” adding that it “doesn’t look like your typical trail made by a snowball or a … piece of ice tumbling and rolling across the hillside.” Glockner says the object must be something artificial – likely a spacecraft measuring some 63m in length. 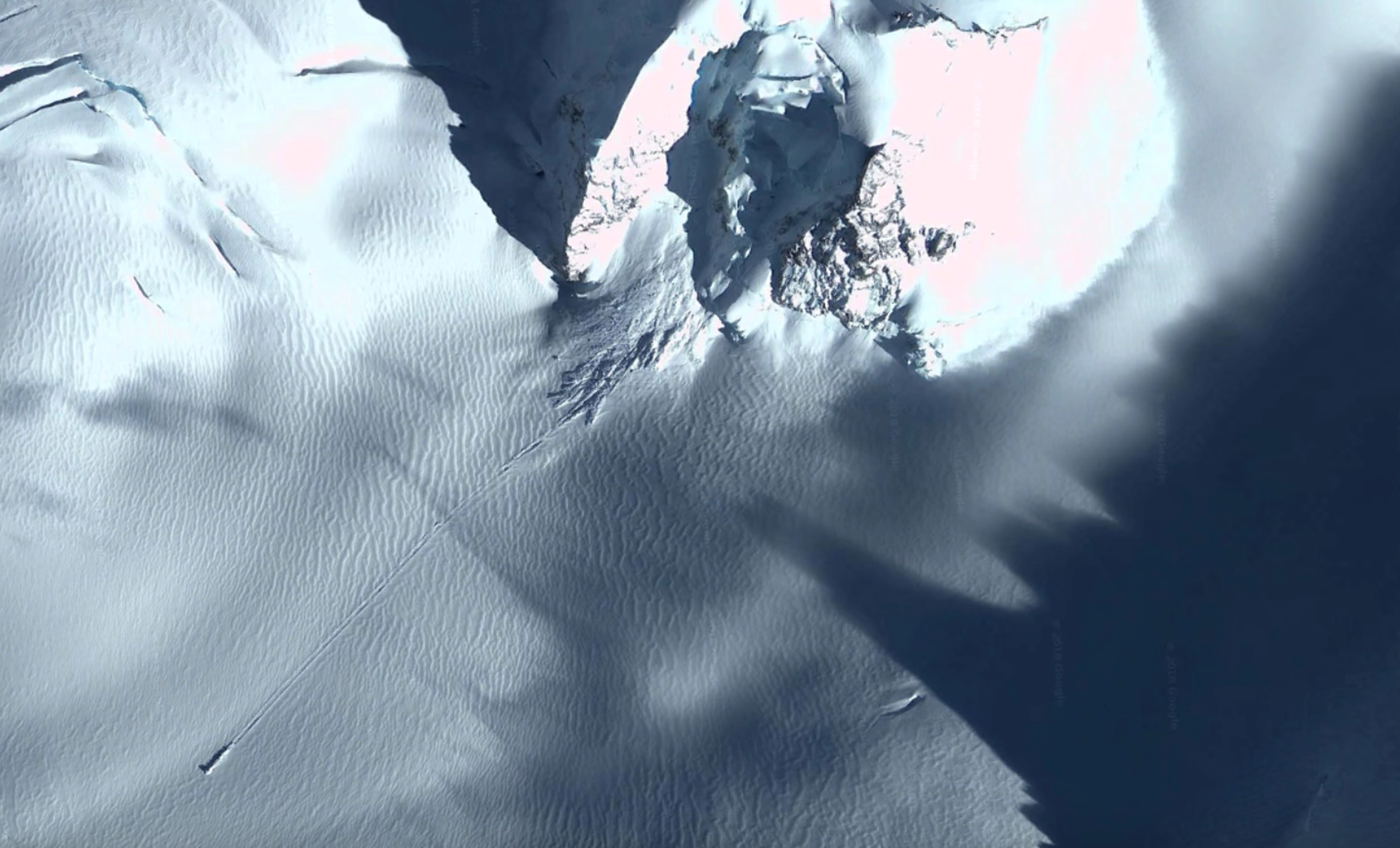 The snow-covered object, and the trail leading back to the mountain. Image: Google Earth

SecureTeam claims to be “your source for alien & UFO related videos, leaks and information“, but in this case they have clearly fancied themselves as geologists. Thankfully, we have a real geologist in the form of The Landslide Blog‘s Dave Petley to set the record straight. Aside from pointing out the rather obvious trajectory problem of the alleged UFO in relation to the “damaged” mountain, Petley says the object in the video is very clearly a boulder that has fallen from that very same mountain. 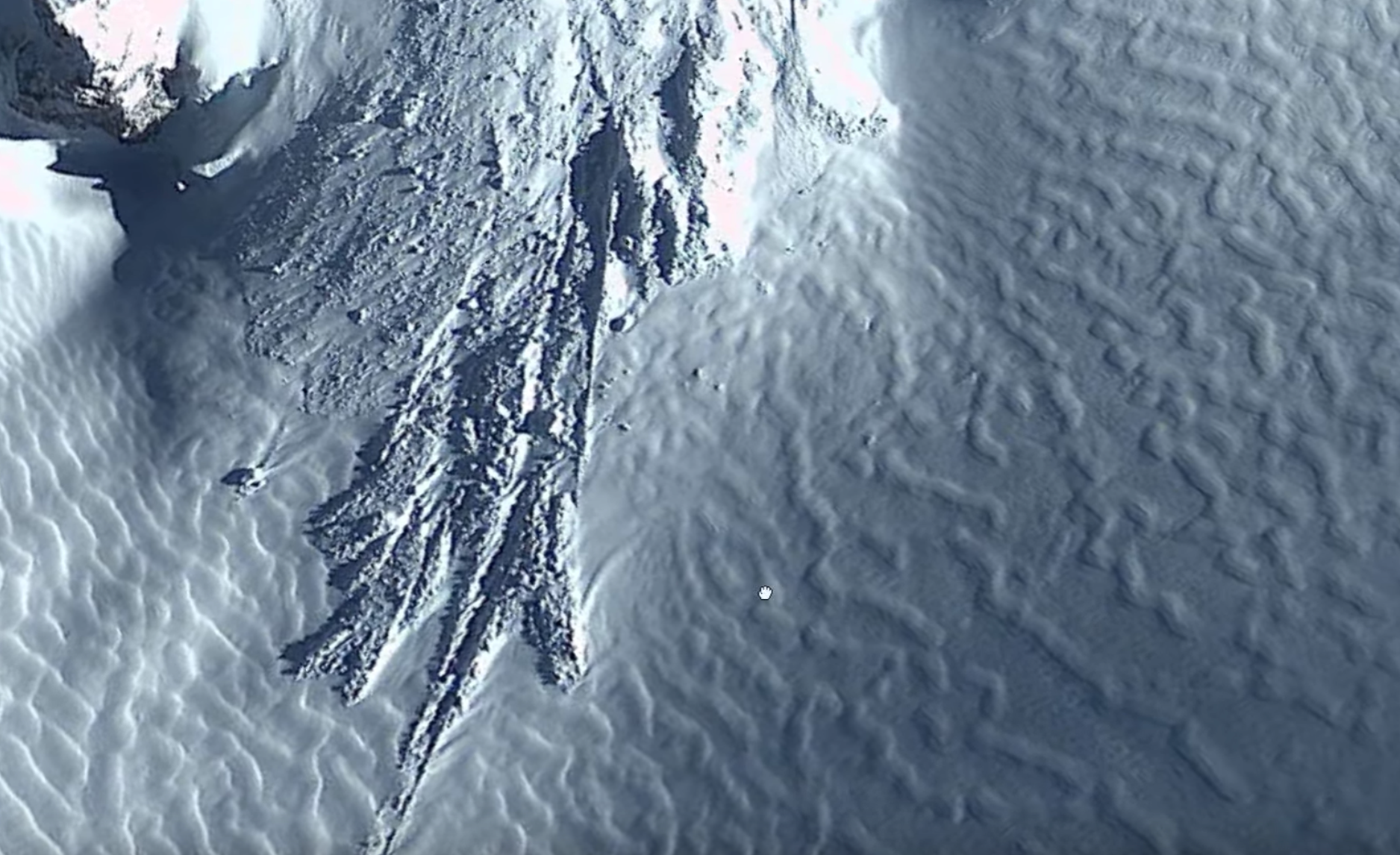 The debris field, or landslide deposit, trailing from the nearby mountain. Image: Google Earth

The smoking gun in this case is the clearcut presence of a landslide deposit directly above the object in question. As Petley writes at his blog:

Of course the runout trail is quite unusual. I am not sure if a block has detached from within the mass, and then moved downslope, or if it tumbled onto the mass from above, and then slid. If I was a betting man (and I am not) I might go for the latter explanation, but without a more detailed investigation I am speculating. But either way this is conventional landslide behaviour on snow and ice covered surfaces, and we have seen other large isolated boulders travel long distances. In this case the elongate shape of the block favoured sliding rather than rolling, but as the friction of the substrate is low the distance travelled can be large.

Nice try, Secureteam10 – but you’ve clearly stumbled upon a fallen boulder. Sadly, and as the YouTube video’s corresponding comments section demonstrates, science that interferes with wishful thinking tends to be dismissed by the UFO conspiracy theorists who are easily swayed by these sorts of arguments.