More Evidence That Dogs ‘See’ The World With Their Powerful Noses 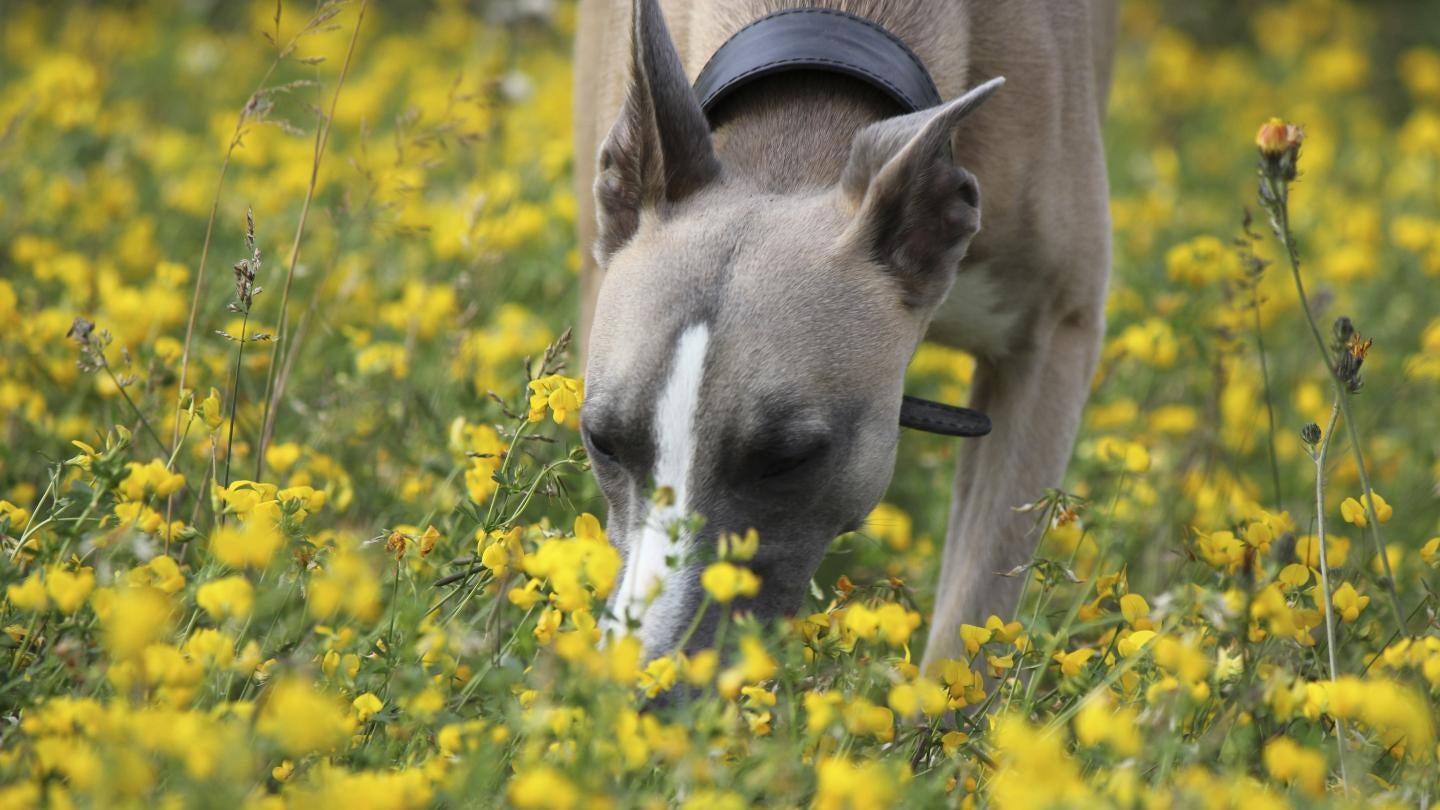 Dogs are equipped with a powerful sense of smell, but scientists haven’t been sure if our canine companions are capable of linking an aroma or scent to a physical object. New research suggests this is very much the case, and that dogs form a mental picture in their mind of the target when they’re tracking down a scent.


New research suggests dogs are able to form a mental image of an object they have smelled. Photo: Petra Jahn

For humans, vision is an incredibly important sense. Dogs, by contrast, rely more on their senses of smell and hearing to gather information about the world around them. Their vision actually sucks, having a visual acuity that’s four to eight times worse than ours. What’s more, their line of sight is just several centimetres off the ground (depending on the breed), so they have a very truncated view of the horizon. And contrary to popular myth, dogs don’t see the world in black and white; they are red-green colourblind, meaning they can’t distinguish between objects that are green, yellow and red.

But what they lack in visual acuity is compensated for by their powerful ears and noses. Dogs have excellent hearing, picking up frequencies between 40 Hz to 60 kHz, whereas humans hear between 12 Hz to 20 kHz. Canines have over 18 muscles in each ear, allowing them to independently orient their ears like radar dishes, and dogs can hear sounds that are four times further away compared to humans.

And then there’s their remarkable sense of smell. Dogs have highly a specialised organ in their noses equipped with 300 million olfactory receptors. They also have an olfactory organ in their brain that’s 40 times bigger than ours. The end result is a sense of smell that’s 10,000 times more powerful than humans. “If you make the analogy to vision, what you and I can see at a third of a mile, a dog could see more than 3000 miles away and still see as well,” Florida State University scientist James Walker told Nova a few years back.

This is all very well established, but we don’t actually know how this olfactory information is being processed and interpreted in the dog’s brain. Simply put, we don’t know if dogs understand what they’re smelling aside from it being “good/desirable” or “bad/undesirable”. Scientists haven’t been able to prove that dogs perceive odours as representing specific objects, which admittedly sounds very strange.

“I guess that is what many dog owners think when they hear about our new study,” Juliane Bräuer, the lead author of a new paper published in the Journal of Comparative Psychology, told Gizmodo. “We – as humans – would assume that they have a picture, but we do not know it! The interpretation of behaviourists would be that dogs perceive an odour like a stimulus, that is either relevant or not. We tried to show that dogs really expect something specific when they follow an odour trail.”

Indeed, as the new study shows, dogs do more than just rank a smell as being “positive” or “negative” in accordance to their needs. Bräuer, who works out of the Max Planck Institute For the Science of Human History, conducted experiments showing that dogs create a mental representation of a target when they’re tracking a scent.

For the experiment, Bräuer’s team tested 25 dogs that had prior training as sniffer dogs with police or search-and-rescue teams, as well as 23 untrained family dogs. Each dog was paired with two familiar toys they like to retrieve. The researchers set up one of two possible scenarios for the dogs: After following a scent trail made with one of the two toys, the dogs either found the matching toy (the normal condition scenario) or the other toy (unexpected condition). Each dog participated in one of the two tests for four trial runs.

In the normal condition scenario, the dogs didn’t do anything out of the ordinary. But in the unexpected condition, the dogs arrived at the toy and exhibited a moment of hesitation – a brief pause that basically said, “What the hell is this?” In other words, they had been searching for a specific object and were surprised to find something different. After the hesitation, however, they went back to searching for the object that matched the scent.

“Although they had obviously noticed the toy, they continued to search via smell, probably for the toy that had been used to lay the scent trail,” said Bräuer. This strongly suggests that, after picking up the scent, the dogs had formulated a mental picture in their mind of a specific toy.

The surprise effect was most noticeable during the first round, and it waned with each successive round. The police and search and rescue dogs retrieved objects faster than the untrained dogs (which was expected), but by the fourth and final round they were all retrieving the objects with equal proficiency. Importantly, the “surprise effect” was seen in both groups.

Importantly, this is a behavioural study, and the scientists can’t be completely certain that the dogs are indeed forming a representation of the targeted object in their minds, and are instead guided towards an object or behaviour by other factors.

“I find it extremely difficult to imagine how it is to be a dog and perceive the world mainly through the nose, and thus, it is difficult to create an appropriate study to answer the many questions we have,” admitted Bräuer. Other researchers, she said, should investigate connections between smell perception, search behaviour and cognition to get a clearer picture of what the dogs are actually doing.

That caveat aside, it shouldn’t come as a surprise to learn that dogs are capable of this mental feat. Much of the impetus behind this study is the now-outdated notion that dogs are unsophisticated automatons, driven almost exclusively by instinct and urges. We’ve known for years that dogs exhibit very human-like levels of self-awareness; when in MRI scanners, the “happy” parts of their brain are activated when they smell familiar humans. Studies such as these – though important – are merely pointing out what is blazingly obvious to any dog owner.