How The Technology In Black Panther Could Create An Amazing Car 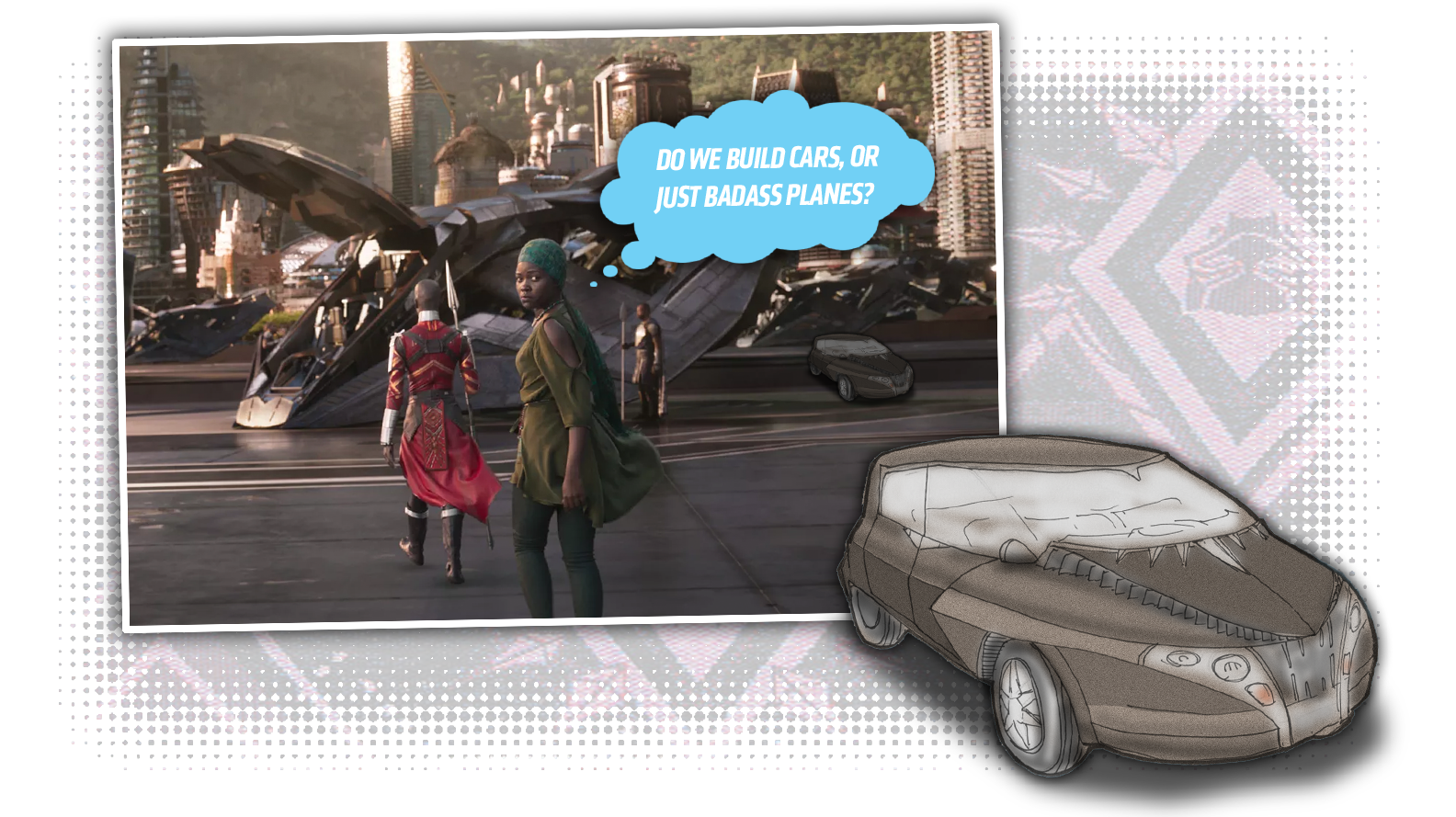 Like most people who saw Black Panther, I thought the views of Wakanda, a wildly-advanced and fictional East-African country, were some of the most compelling and exciting parts of the movie. Of course, seeing Wakanda brought up a lot of questions: What’s the deal with those sand-like 3D display systems they have? How do they make such good holographic images come out of stylish bracelets? How fast do those mag-lev trains go? And, perhaps most importantly, what are Wakandan cars like?

Oh, I guess I should mention there will likely be some kind of spoilers here, so, you know, I’m warning you now. Here be spoilers. Run. 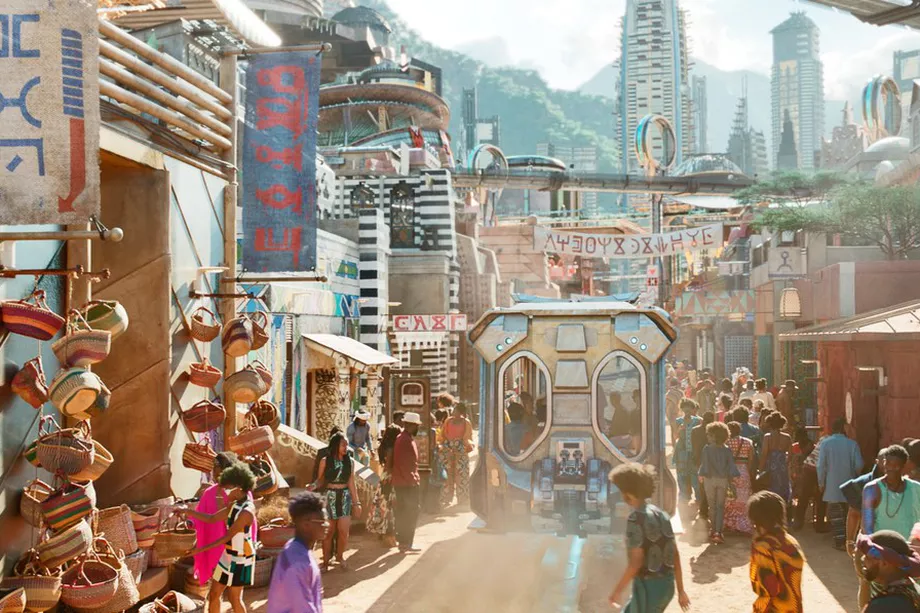 Some Wakandan light rail, running through Steptown, which seems to be where Wakandan hipsters live

Now, while we saw a number of very impressive Wakandan transportation machines: aircraft (possibly spacecraft as well?), mag-lev trains, what looked like a nice light-rail system, we never actually saw any Wakandan rolling, car-like automobiles. Perhaps their cities are designed to not require them, or perhaps they prefer mass-transit and air travel culturally; I’m not really sure. But that’s not going to stop me from doing some speculation about what a Wakandan car could be.

I’m actually thinking of a very specific kind of Wakandan car: a Wakandan export-market car. I’m taking as a jumping-off point the events at the end of the movie, where Wakanda is finally abandoning their centuries-long self-imposed isolation from the world and will now become part of the global community, an act which will include the desemination of advanced Wakandan technology to the world, at least to some degree.

Wakandan technology is based on the (again, sadly) fictional element known as Vibranium, of which Wakanda has an incredibly supply of, thanks to a massive meteorite of the stuff buried beneath the country. We see vibranium powering things like Black Panther’s suit, for example, and it’s clearly capable of some incredible things, which is why it’s so incredibly valuable.

I don’t think the Wakandans will try to immediately upgrade the entire planet to the level of technology they enjoy; that would be a colossal undertaking, and not only am I not sure that makes sense for Wakanda, I’m not sure that’s even possible. What I do think will happen is that Wakanda will produce products for global consumption that, while largely similar to existing global technology, and as such are understandable and will work with current global infrastructure, will incorporate some amount of advanced Wakandan vibranum-based tech to make them better in some dramatic way.

That’s what I think the Wakandan car will be like: it will be essentially recognisable as a car, in that it will have wheels that can use tires you can buy from any local tire store and you’ll drive it and use it in essentially the same way we use cars now, but it will have a huge vibranium-related advantage. Here’s what I’m imagining this first Wakandan export market car, the Wakanda Motors Ingwe (that’s Xhosa for ‘panther’ or ‘puma’) , will be: 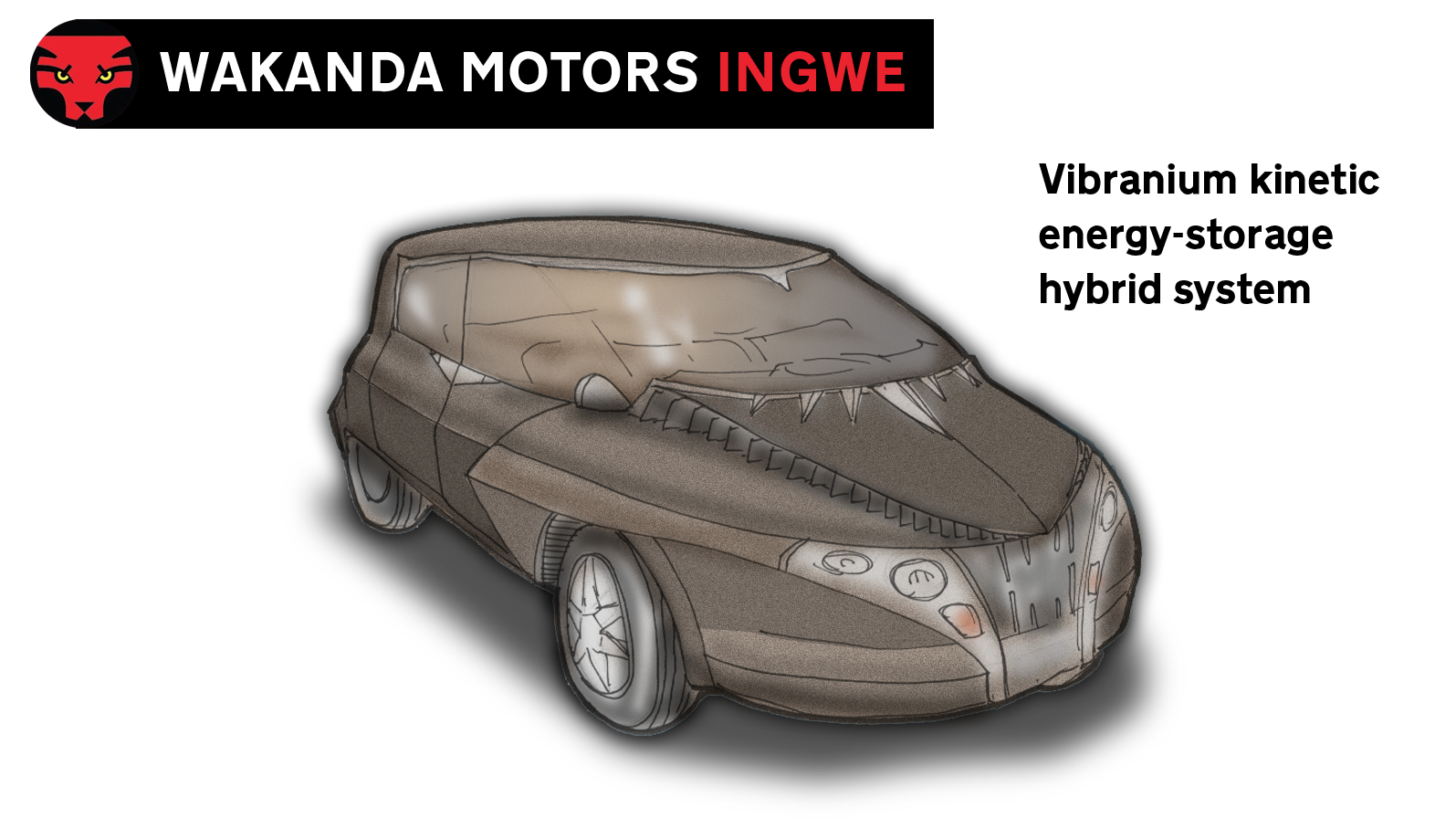 It will be a hybrid, fundamentally. But with a very crucial difference. Where the hybrids the rest of the world builds rely on heavy, inefficient chemical storage batteries, the Wakandan car will use the remarkable energy-absorbing and releasing power of vibranium.

We’ve seen this power in action in Black Panther’s suit, which has vibranium fibres woven into it. Black Panther gets shot with a bullet, for example, but instead of peeing himself and dying like most of us would, the suit not only stops the bullet, but absorbs the considerable kinetic energy from the bullet, stores it, and later releases it when Black Panther wants to do something like punch a truck through a building.

The WM Ingwe would use this kinetic energy-storage and release property of vibranium to replace the heavy batteries of a hybrid. By building the cars with an alloy of aluminium and vibranium for the main parts of the frame, and perhaps some of the main body panels, the Wakandan car would have a structure that’s not just light and incredibly strong, but capable of storing vast amounts of energy. 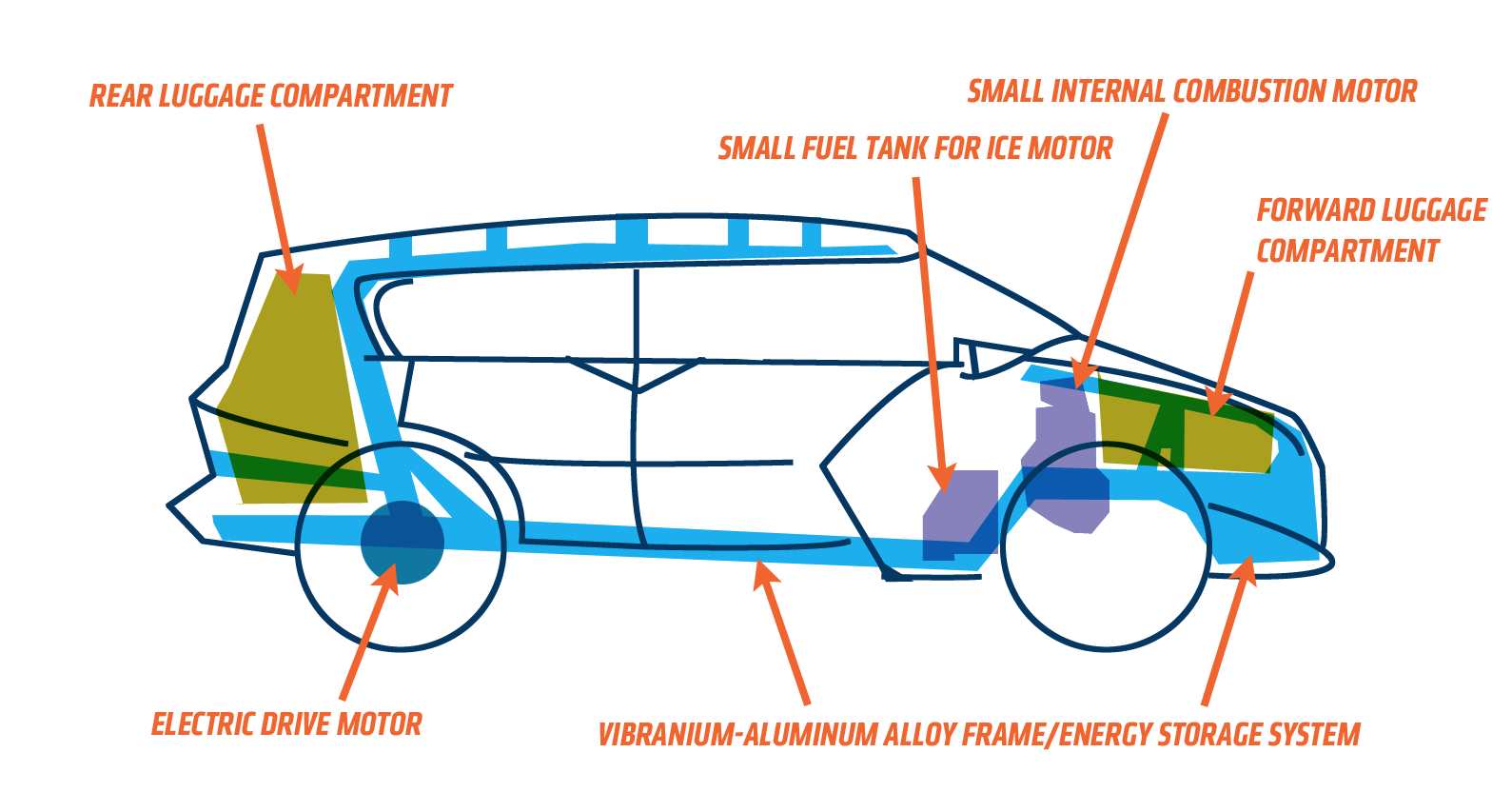 Because vibranium has so far only been shown as something that can store and release energy, not generate it, we’d still need to provide some initial source energy into the system. It may be possible to set up some sort of ‘charging stations’ which input energy into the vibranium frame of the car, allowing for a purely electric vehicle, but I was thinking it might be more useful for these cars to use a small internal combustion engine to act as an initial source of energy; It could be a fairly small motor, one litre or less, maybe something equivalent to one of the small three-cylinder motors being built by Ford, GM, Mitsubishi, BMW, whoever.

Maybe this part will be sourced outside of Wakanda, or maybe some Wakandan researchers will have fun developing a tiny, powerful ICE engine of their own. It doesn’t really matter. My guess is it would be a better PR move if they partnered with local companies to produce this part of the car. 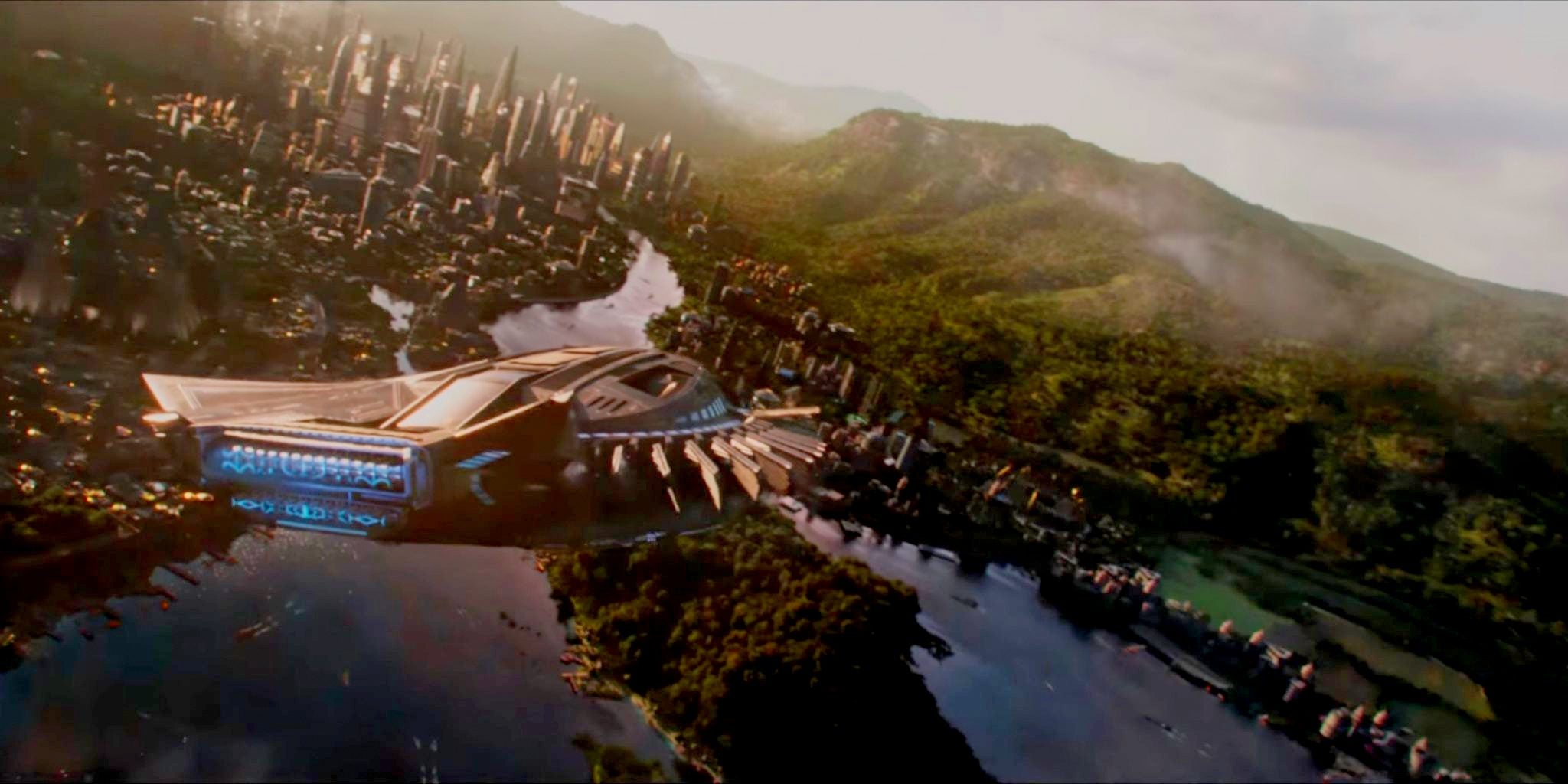 Pictured: not a car

(Actually, now that I think about it, probably the best move to keep from overly disrupting the global economy would be for them to just licence the fundamental technology and provide the needed vibranium to companies all over the world. In that sense, think of the WM Ingwe as a sort of low-volume reference vehicle, with versions of the basic tech produced by established carmakers, under licence.)

The ICE motor would get things started, turning gasoline or diesel into kinetic energy that would start ‘charging’ the vibranium frame, which would then provide power output to the main electric motor driving the rear axles. Let’s say this is a Wakandan-designed motor, a scaled-down version of what they’re already making for their trains or mining equipment or hover-ship windshield wipers. Based on their technological prowess with this stuff, I imagine this could be a pretty potent motor, certainly comparable to what Teslas use. Let’s say it can produce a peak horsepower of 500, because why not.

Once in motion, the vibranium frame and body panels are collecting every bit of kinetic energy they encounter – the molecules of air that hit the body of the car will transfer their kinetic energy to the system, the vibrations of the road, the motions of the passengers inside, along with more traditional energy reclamation systems like regenerative braking.

Hell, if the car was sitting for a while, and you forgot to put fuel in the ICE motor, you could probably get a good 10 or 32km of range by just pounding on the hood with your fists for a few minutes.

Vibranium has been shown to be incredibly effective at harvesting ambient kinetic energy; a few minutes of ICE-assisted driving would likely be enough to charge the vibranium up to the point where you could travel for 200 to 300 miles before needing to restart the gas engine — perhaps more if it was windy, or if you, say, got caught in a rainstorm, with each raindrop adding a nice burst of energy to the car as it impacted the vibranium-alloy roof and hood.

What you’d have, essentially, is a hybrid car without the biggest disadvantage of a hybrid: the heavy, inefficient battery. The vibranium frame and body panels would be both an incredibly strong and safe structure for the car as well as all the energy storage the car needs. You could shave hundreds and hundreds of pounds from cars, eliminate the difficult and environmentally troubling mining of resources like lithium, and never worry about finding a charging station or if your battery pack is going to degrade to uselessness after 10 years.

With a car like this, the Wakandans could make every Prius (and likely Tesla) on the road obsolete overnight. Wakandan vibranium technology has the potential to make incredibly efficient automobiles without sacrificing range or performance. I can’t wait until we start seeing these things on the market — you’d have to be an idiot to buy anything that didn’t use Wakandan vibranium-based tech.