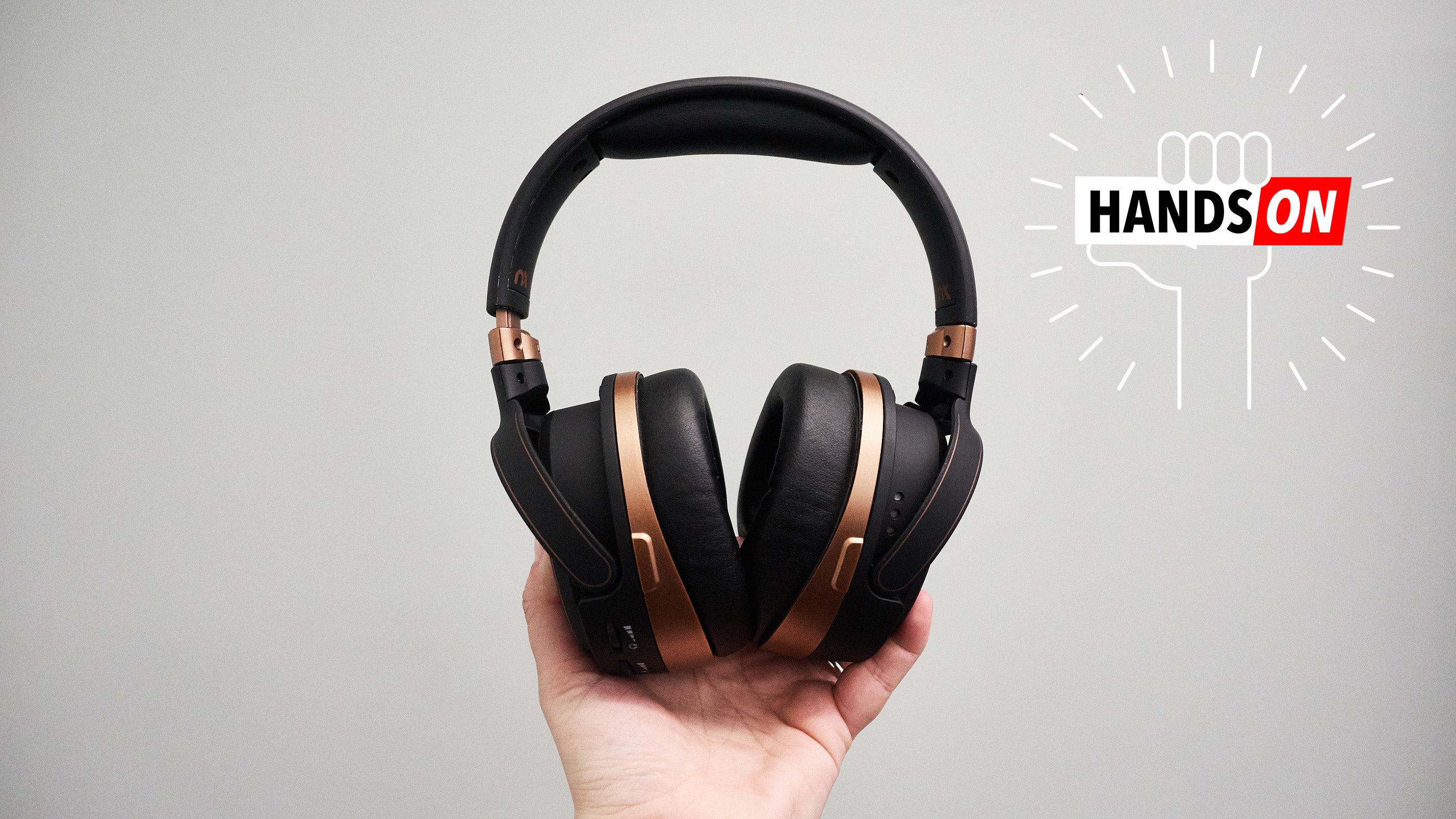 3D audio in headphones that envelops you like a surround sound home theatre is an elusive thing. The market is dominated by products for gamers, who play content that’s mixed for surround sound, and who want to hear the crunch of opponents in the bushes behind them as it’s a matter of life and death (in a game at least). Also they don’t want to wake the neighbours at 3AM.


There are plenty of 3D-ready “surround sound” headphones out there, but the new Mobius headphones from Audeze are probably the most sophisticated to date, incorporating not only 3D audio processing but also head tracking to create an experience you just can’t get from any competitor products. 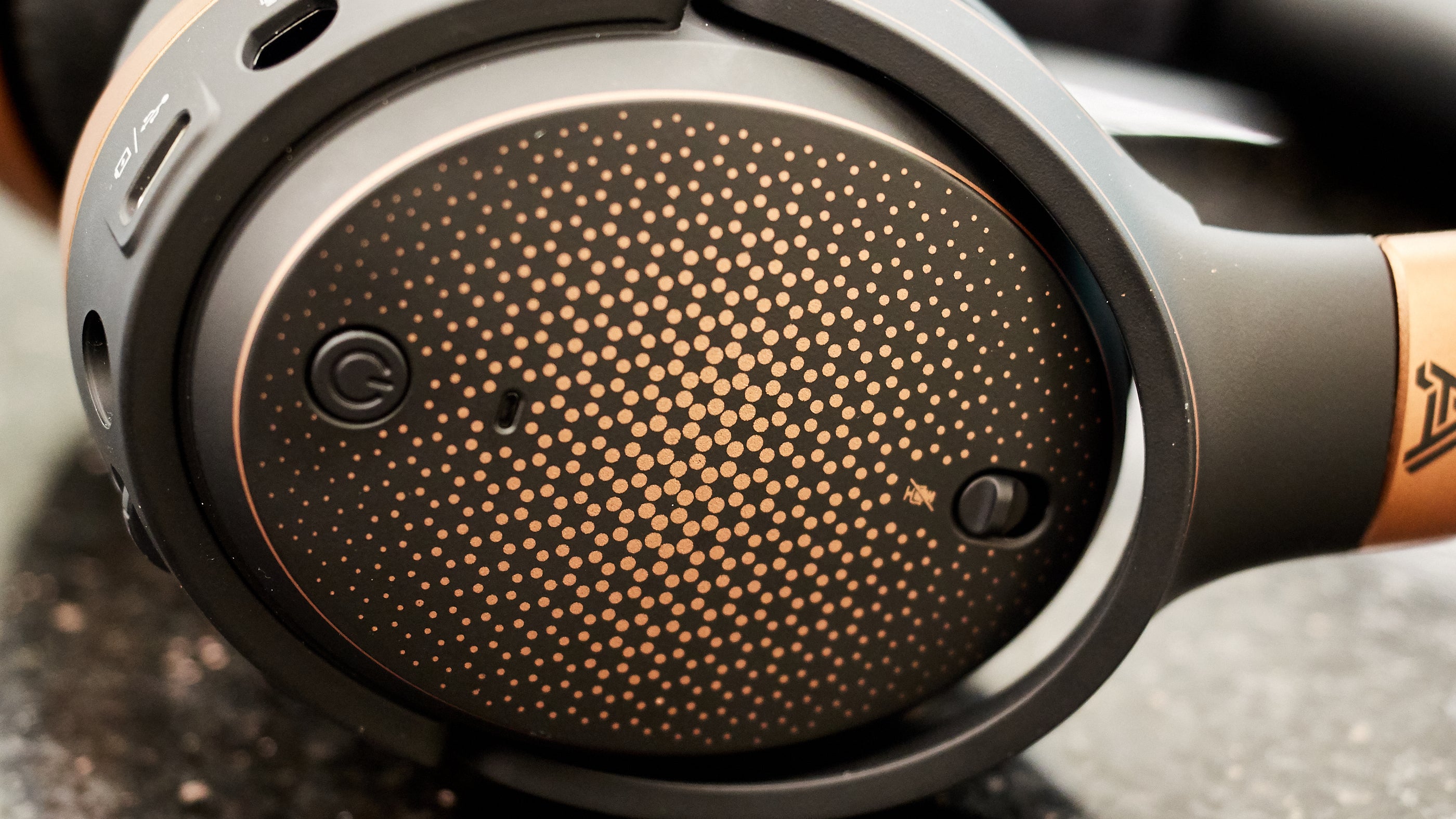 Until now, if you’d heard of Audeze, it was probably in the the context of some absurd audiophile product. The company got its start a decade ago producing very expensive, very large headphones with planar magnetic drivers. The headphones that sit on your desk probably use dynamic drivers. This technology involves transferring audio voltage to a magnet attached to a voice coil which is attached to a speaker diaphragm that vibrates to blast tunes into your ear. Planar headphones are similar in concept but use much larger magnets placed on either side of a very thin diaphragm with a conductor attached. Without getting into it too much, these theoretically produce much better sound. In the beginning, Audeze headphones were very accurate, incredibly large and cumbersome – they even required a separate amplifier for the best results — and cost thousands of dollars. In the years since, the company has expanded its line to produce similarly uncompromising products in better designed packages at more affordable price tags. Yes, most still cost north of $650, but not all of them.

A few years ago, when the iPhone broke up with its headphone jack, Audeze saw an opening and released a set of its midrange headphones (~$1,000), lol) with a specially designed lightning cable, and suddenly, it found itself a new audience of fans who weren’t self-identified audiophiles but rather tech enthusiasts. Now, the new Mobius headphones represent an attempt to carve out yet another niche of people who like to spend top dollar on hardware: gamers.

Gamers are a notoriously fussy lot who, for reasons of gameplay and general comfort, often splurge on graphics cards, fancy mice, plush desk chairs, and of course, headphones. But in the eyes of Audeze CEO Sankar Thiagasamudram, most of the headphones people are using for gaming are just trash.

“If I look the gaming headphone companies, with the exception of one or two companies, there is almost no audio pedigree,” he told Gizmodo. “Most of them are keyboard and mouse makers making a headset because they can put 13 million LED colours on it.” He said that in one of the competitor headphones that the company tore down, the LED lights cost more than the audio components.

While some products like the Game One from Sennheiser are quite good, others are stuffed with gimmicks. Who can forget the Razer Tamiat with its 10 discreet drivers that pummel you with sound? We all know Audeze can make a great-sounding headphone, the real question is whether the novel technology that it’s introducing is more gimmick or breakthrough. 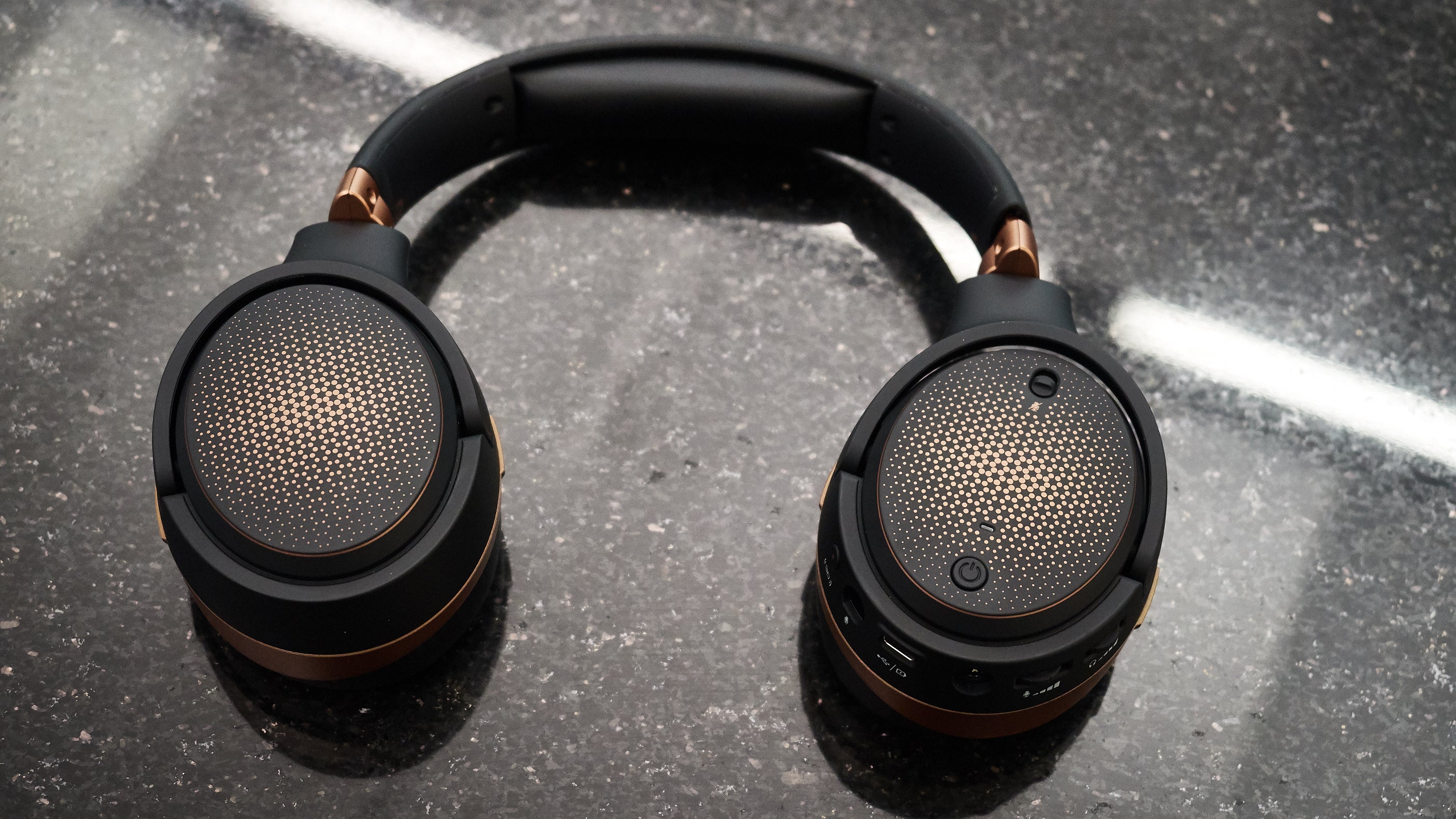 To brave the new market, Thiagasamudram said the company has produced “our most advanced headphone yet.” As with the company’s other products, the Mobius headphones still use planar magnetic tech, but now, in addition to working with a standard aux connection, the headphones will support USB-C connection and, for the first time, Bluetooth 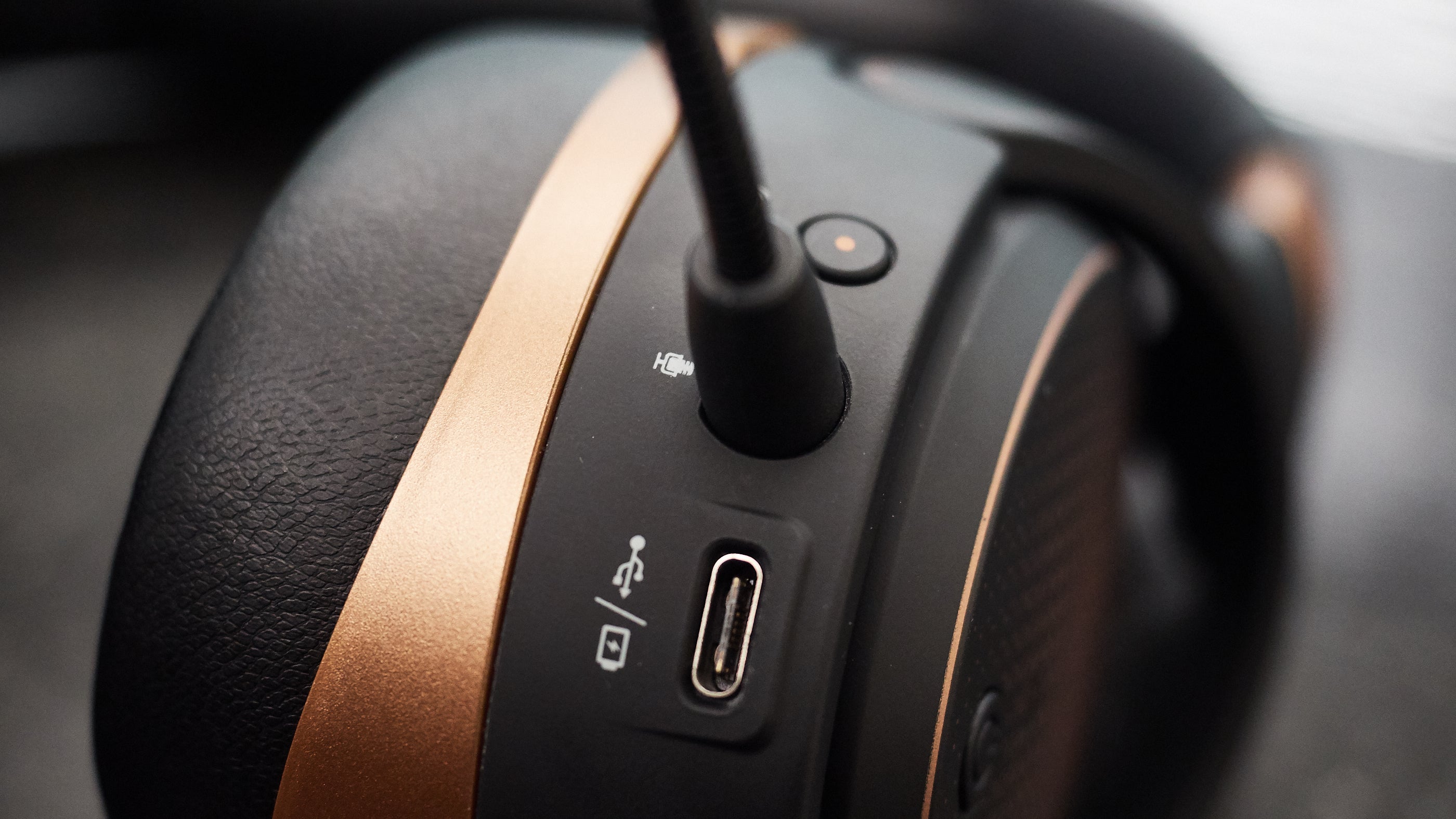 When you sit down to play a game or listen to music or watch a movie, the Mobius headphones perform sophisticated processing to create a surround sound effect that not only takes into account the source material (be it stereo or 5.1) but also your anatomy, an understanding for how sound reflects off walls in a room, and data from head-tracking sensors. To get truly surround sound audio, you’ll need to use the USB-C connection on a computer, but the 3D processing and head tracking will work with Bluetooth and aux. 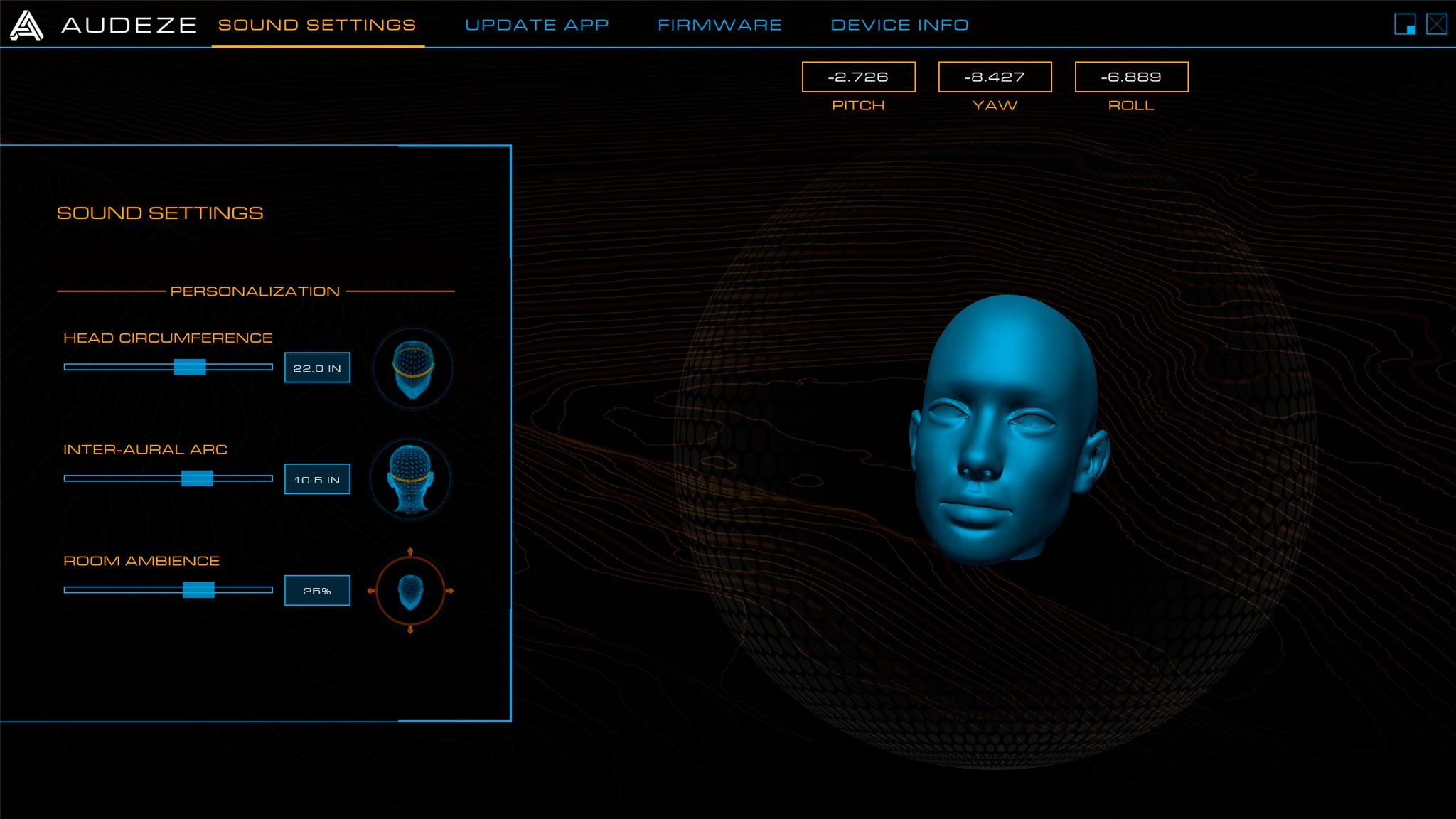 When you hear sound in the real world – that is, not from a set of headphones – you hear it inside each of your ears as reflected off several parts of your body and especially different parts of your head. Your brain processes differences in loudness and timing as perceived by the anatomy of your ear to create a 3D picture of the world. Audio engineers can do a rough calculation of how this works and process audio to take this into account. The Mobius headphones, however, take this a step further by allowing you to define the size of your head in a desktop settings app. The audio processing is tweaked accordingly. Similarly, since you perceive space not just from the sound you hear from the source but also from how sound reflects off other objects and the walls in a room, Audeze also has a “room ambiance” setting to account for these reflections. 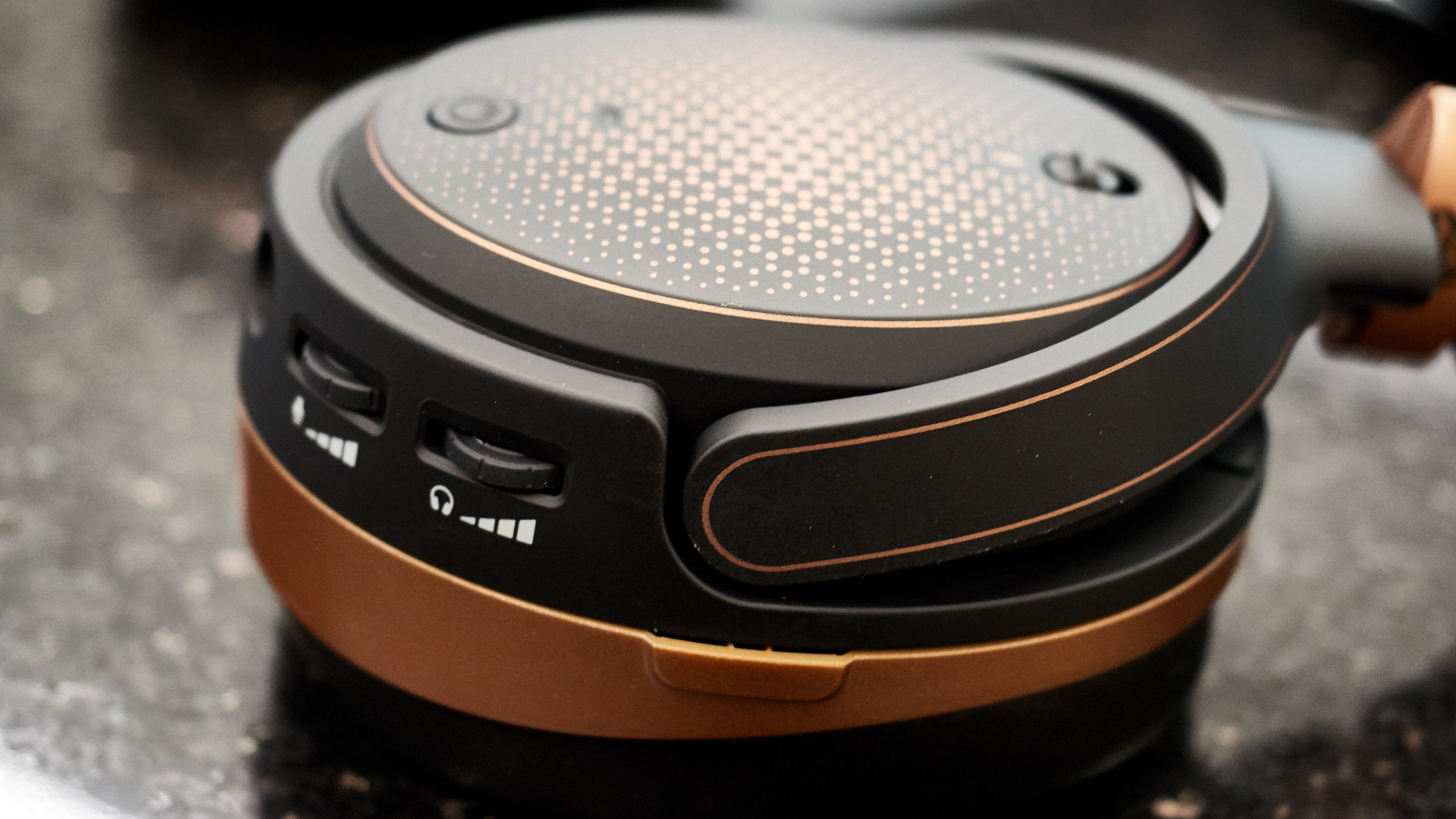 But the real kicker is in the built-in head tracking technology, which consists of a 3-axis accelerometer and a 3-axis gimbal. Once you put on the headphones, you press a little button on one of the ear cups to “center” the headphones. From there, the headphones track the movement of your head and adjust the audio so that what’s in front of you stays there. That means if you turn your head to the left, the audio will stay in the same place, with the volume and timing precisely adjusted in each ear cup to create the effect. 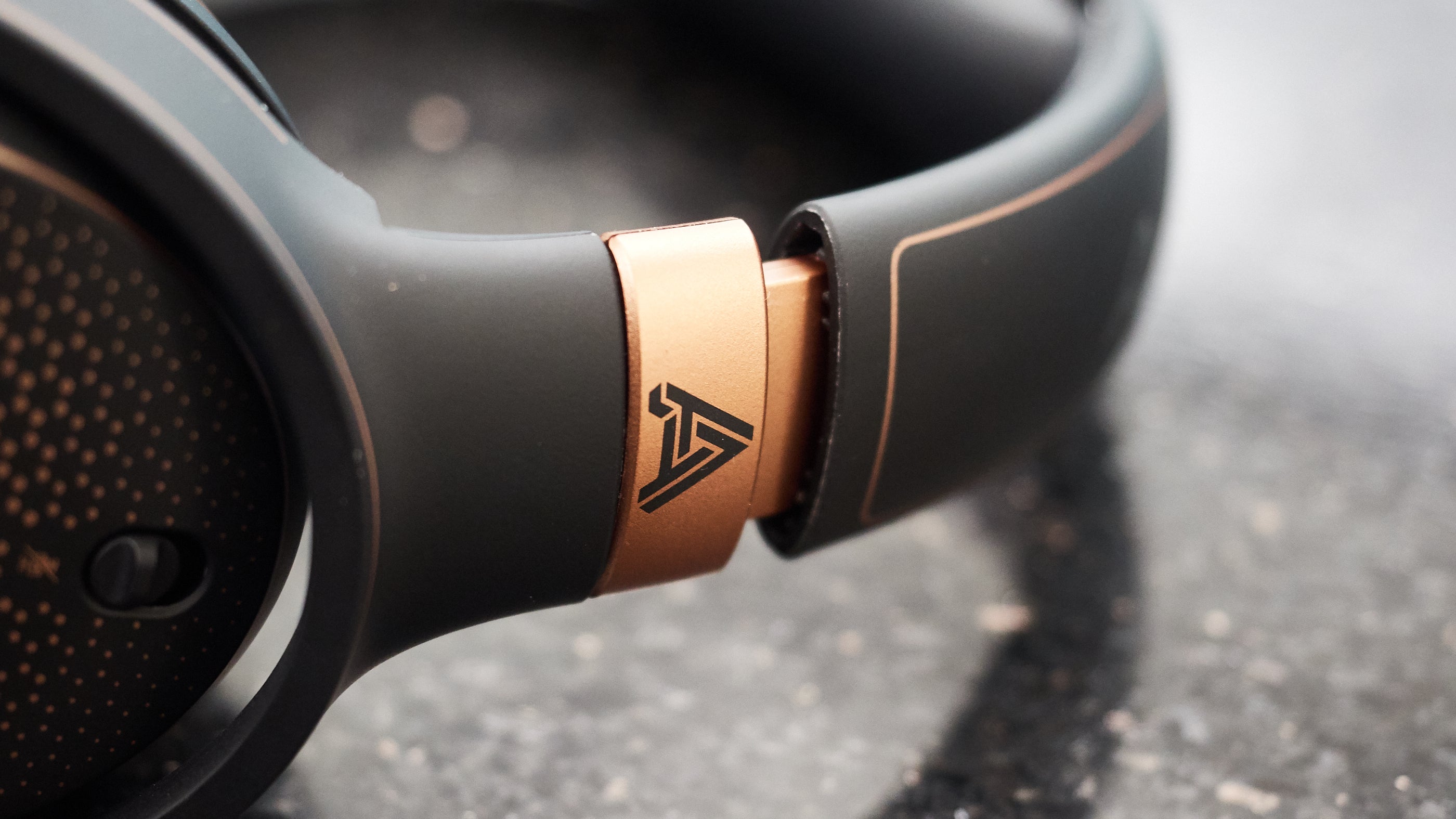 In my experience in a controlled demo listening to mobile audio, movie soundtracks, and even a brief gaming session, the effect felt very realistic. It’s weird, at first, but after a few minutes of violently jerking your head around to feel out how extreme the effect can be, you settle into a more natural and stationary mode of watching and hearing something, where the head-tracking is barely perceptible. The audio sucks you in, for sure, but in large measure, I’m convinced that’s because – new tech aside – those planar drivers are reproducing the audio very accurately, so the headphones sound like a dream.

I’m convinced Audeze’s sophisticated 3D audio reproduction could really be a boon, especially to PC gamers and people who like to watch movies on planes. As for the head-tracking, I’m not so sure the casual user will have much use for it. Thiagasamudram told me it could help reduce listening fatigue. Basically, this means that because sound reproduction is never as perfect as the real world your brain has to do some lifting to make you perceive recorded audio as real. So to the degree that you can make things sounds even marginally more real (by adjusting audio as you move your head, for example) you reduce the rate at which your ears get tired.

One area in which head-tracking definitely has a use is virtual reality. Of course, most VR headsets already do head-tracking, but Audeze will offer a “Creator Package” that comes bundled with plugins to help people develop VR content.

For its part, even Audeze isn’t totally sure how much of a market there will be for these headphones, so it’s doing a first run of sales on Indiegogo, with the units shipping in early May. Introductory pricing will start at $259, and the final retail pricing will be $519. The Creators Package bundled with plugins for VR will cost $779.

Has Audeze leveraged its considerable audio expertise to create something that’s not only new but worth it? We’ll believe it when we spend more time with the new Mobius headphones later this year.