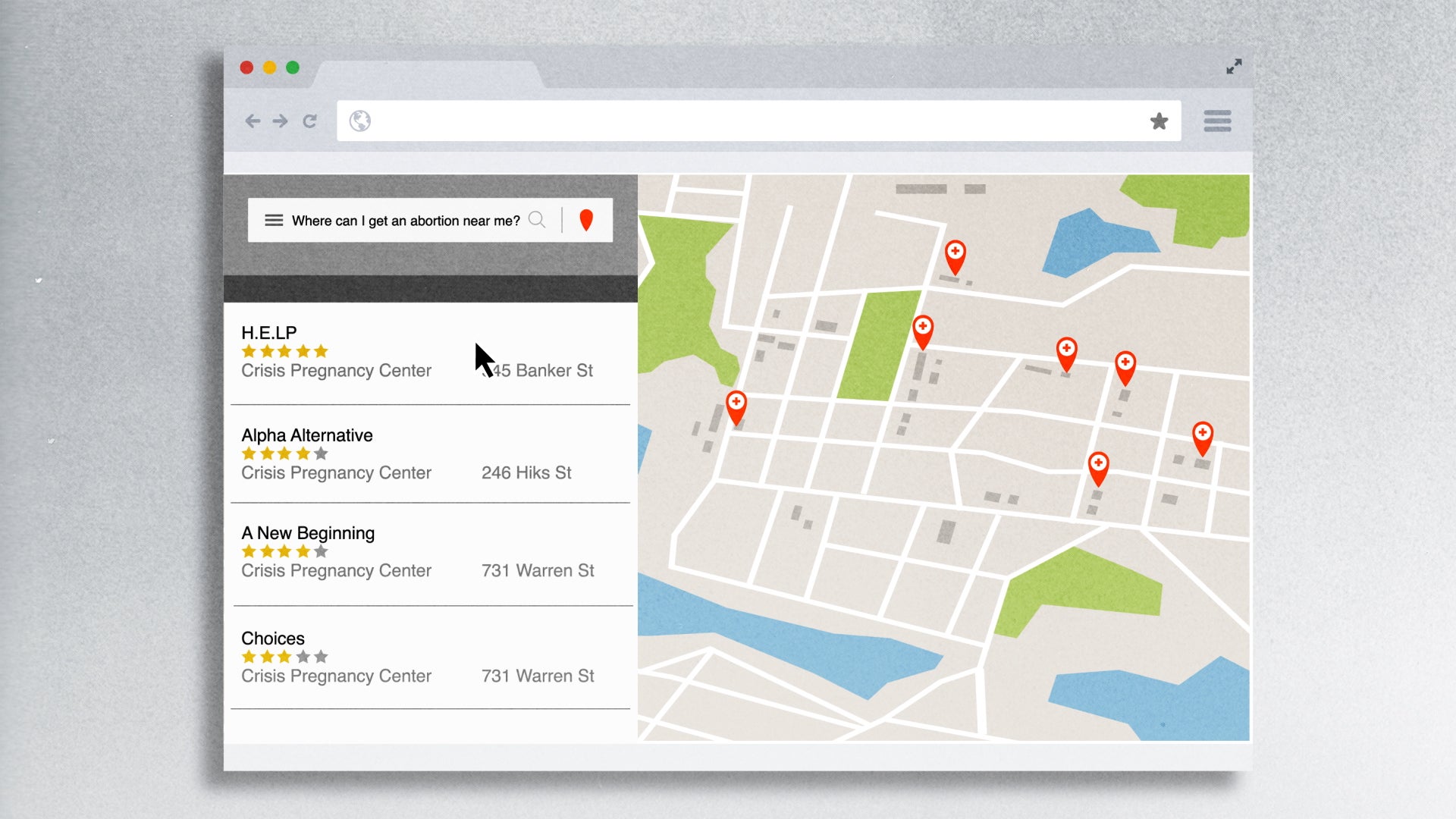 If you're searching for abortion care, be careful using Google Maps - you might end up at a crisis pregnancy centre instead of a legit clinic. These facilities, where staff pressure clients to "choose life", have been gaming results at the local level using keywords and the maps function.

Gizmodo and Damn Joan have partnered to investigate; read what it's like to visit a crisis pregnancy centre on their site, and read about what happens when you search for abortion care in Google Maps below.

If you are pregnant and looking for an abortion clinic in Jackson, Mississippi, you might initially think you are in luck. A quick trip to Google on your phone and typing in, "Where can I get an abortion near me?" brings up a Google map with eight different pins, all located within 16km of your location.

It's once you click on the map itself and see the list - including their names, distances from you and customer reviews - that you learn that your real choices are far, far fewer. Your first result is Birthright of Jackson, a local crisis pregnancy centre [CPC] that doesn't do terminations. The third result is Center for Pregnancy Choices, which is the same story. The fourth result is CPC Fondren, yet another crisis pregnancy centre. The fifth is Dr Beverly McMillan, a former abortion provider turned anti-abortion activist, and whose late husband was a frequent protester on the footpaths in front Jackson Women's Health Organisation - the only place in the listings (or in the state itself) where a person can actually obtain a legal abortion. That's better than usual, said Derenda Hancock, a clinic escort for JWHO. "In the past JWHO was at the bottom of the list, like eight CPC's and then us," she said. "Nice to know the only abortion clinic in the state has made it to the top five!"

Google has a complicated relationship with crisis pregnancy centres. In 2014, NARAL Pro-Choice America pressured Google to stop accepting advertising for the entities - which are often religiously affiliated, do not always have licensed medical staff on site, and never provide abortions or refer patients to clinics that do - saying that the advertisements violated Google's service terms against "misleading, inaccurate and deceitful ads".

Anti-abortion pregnancy centres were purchasing advertising on Google in order to insert links to their own clinics as top results based on keyword searches for terms involving abortion. The ads would be marked with a small "ad" next to them to show that they were paid results, but otherwise looked like organic results. They also often used ambiguous phrases such as "Think you are pregnant? Get answers," or "Considering abortion?" to lead people to click on them and draw them away from abortion providers and to their anti-abortion pregnancy centres instead. According to NARAL's research, using the search engine to find "abortion clinics" led users to a crisis pregnancy centre about 79 per cent of the time, creating mass confusion considering the CPC's often deliberate use of names similar to existing abortion clinics. Google agreed to remove the ads, but that just left CPC's looking for an alternative way to promote themselves online and reach out to their "abortion-vulnerable" clients, as they refer to pregnant people seeking terminations.

Enter the Google Maps function, an increasingly popular way for internet searchers to discover goods, services and other nearby necessities. With business and non-profit listings that can be created by anyone and a public ratings system open to all, this partially crowd-sourced list of results should offer the best variety of options when it comes to searching for anything local.

But when it comes to abortion clinics, it simply doesn't work. To test, I entered "Where can I get an abortion?" into the Google and then clicked on the map to view all of its results within 8km of my home in Minneapolis. The first was an ad for Planned Parenthood. The second - which was both the closest and the highest ranking result - was "Abortion Advice", listed as a "Women's Health Clinic", and which on its website offers a "Free Pre-Termination appointment", all implying either it offers or at least refers for legal abortion care.

I am by no means alone, either. I contacted 20 people in cities and states across the US to ask them to go to Google, either on desktop or on their phones, enter "Where can I get an abortion near me?" and then click on the resulting map to see what happens in their locations. In all but two (Little Rock, Arkansas and Queens, New York) crisis pregnancy centres were offered up as abortion clinic options whenever that sentence was entered.

Under normal circumstances, a system that relies mostly on user input should be an accurate way to draw results on Google Maps. After all, there is no advantage to a steakhouse trying to convince someone looking specifically for vegetarian food to come eat at their restaurant - all you would get are bad reviews and lower sales numbers.

But crisis pregnancy centres don't have a financial dependence on their "customers". Because their patient base relies primarily on those who are intending to go to abortion clinics to end their pregnancies, it is essential for them to insert themselves into those clinic searches in order to find targets. CPCs that aren't already in the system are using "add a missing place" to insert their own listings to the pool. Google itself offers a number of practices to improve a listing's rankings in the results, such as entering extensive business info, full contact info, photos, and responding to reviews - as well as using their Google My Business suite of tools to maintain their profiles.

A pregnant person looking for an abortion clinic is most likely going to turn on the computer, open up Google, type in "Where can I get an abortion?" and see a long list of results on the page, some far more relevant than others. The Maps section offers a simple way to sort through all of the information - how far away a clinic is, when it is open, and how highly it is rated by others who have used it - all in one easy glance.

However, because of mostly unmonitored and unlimited user intervention, not every result is actually an abortion clinic, and many are actually trying to deceive potential patients into believing they are. Some categorise themselves as "Women's Health Centres", something that some abortion clinics do as well, making them impossible to separate from actual medical abortion providers. Others more truthfully list themselves as "Pregnancy Centres", but the category designation is small and easily overlooked, and with names such as "Choices" and "Women's Care" it becomes increasingly hard to tell them apart. The star rating system offers another way to create a more visible CPC and a less visible abortion clinic, with abortion opponents offering two and one star reviews for local abortion providers, and writing three and four star reviews for the pregnancy care centres, often while deliberately avoiding mentioning abortion is not included in their services.

The ability for individuals to manipulate results can actually create a crisis for abortion access in some areas of the country. Toledo, Ohio is home to the last remaining clinic in Western Ohio, but searching "Where can I get an abortion near me?" in Google and bringing up the resulting map of that area brings three results - and only the third one is Capital Care Network, the actual abortion clinic. What is even more difficult for those who are seeking a termination is that according to Kristin Hady, the escort coordinator at the clinic, someone keeps editing the clinic details to say that the clinic has been closed.

"We often have to go and edit the Google listing that the clinic is open, as well, because it seems they will submit that the clinic has closed for good," said Hady. "Depending on what browser clients use to view Capital Care and in which devices, they are still sometimes told it is closed for good. It is very confusing and kind of like playing Whack-a-Mole."

Can Google stop the abuse?

According to Google Communications Manager Liz Davidoff, Google Maps results are algorithm-based and not impacted by ad sales or keywords in listings. "We don't share more information on how local rankings work to minimise people gaming the system," Davidoff said via email. If a user discovers an issue with a listing she said they can report it by clicking "send feedback" and then "report a problem" from desktop maps, but that route only works if you are on Google Maps itself, not a map created after doing a search in the Google browser. Even if it were more accessible, it is unclear how many patients would be inclined to report having been misled while still in the midst of trying to obtain an actual abortion.

After being presented with the results from the searches, Google agreed to investigate why the CPCs are being included in the abortion search queries. "We're looking into the issues you've flagged," Davidoff said in a statement. "We strive for business results that are relevant, accurate and help users find what they're looking for." But until Google can close their loopholes, abortion opponents will continue to manipulate and game the search results algorithm system. And it is the people struggling to find a place to easily and legally end a pregnancy who remain the ultimate losers.