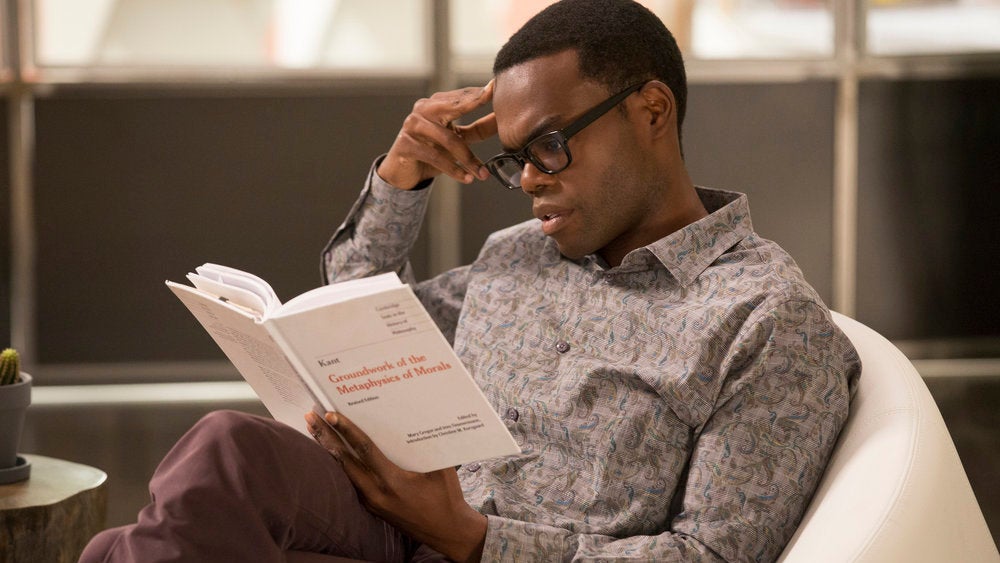 Netflix’s The Good Place returned with its second season last week, pitting architect Michael (Ted Danson) against Eleanor (Kristen Bell) and her friends. But it turns out the actor playing Chidi was first pitted against the plot itself. During the audition process, he was purposefully left in the dark about what the hell he was getting into.

In an interview with GQ, William Jackson Harper shared some details about auditioning for the role of Chidi Anagonye, the over-analysing professor who’s used philosophy as a crutch against the pains of the real world. The series is about a group of people who are navigating a far-too-complicated afterlife. First they were in the Good Place, but then it turns out they were actually in the Bad Place, and now they’re trying to earn their way to the Good Place. It’s all very involved. But as Harper explained, that’s not what he signed up for:

I was going in for a guy named Chris, and the sides entailed this whole thing: Me and Eleanor were meeting at a conference for The Innocence Project, and it turns out she’s not really working with The Innocence Project. I find that out after we’ve been friends for a while. It was a completely different scenario, but the bones of Chidi were essentially there: This really nice guy who’s trying to get people out of jail because they don’t belong there. It wasn’t until I got the job that [The Good Place creator Mike Schur and executive producer Drew Goddard] brought me into the office. They were like, “OK, so…those scenes, and that character you were playing? Here’s the real scenario, and here’s his real profession.” I had no idea. They were keeping it very under wraps.

It’s not unusual for actors to be given dummy scripts during their auditions, so spoilers don’t leak. But it is surprising that The Good Place would be so eager to keep the main plot of their series under wraps – even without the Earth-shattering reveal that they were actually in the Bad Place the whole time.

I am excited about where the season is going, even if it started off on kind of a weird note. The premiere episode, “Leap Into Faith,” was all about Michael supposedly turning on the gang so he could get back in the “good” graces of his evil boss. However, what actually happens is this odd game of Trust Fall where Eleanor starts reading really heavily into Michael’s supposed subtext. He doesn’t actually mean what he’s saying, he’s leaving philosophical bread crumbs for them to follow so they can be saved. Lo and behold, she was right!

The episode ends with all the Bad Place employees high-tailing it out of Michael’s fake Good Place, leaving our heroes to have the rule of the roost. That is, until they try to make a break for the real Good Place. Curious to see how that goes. Let us know what you thought of the latest episode.