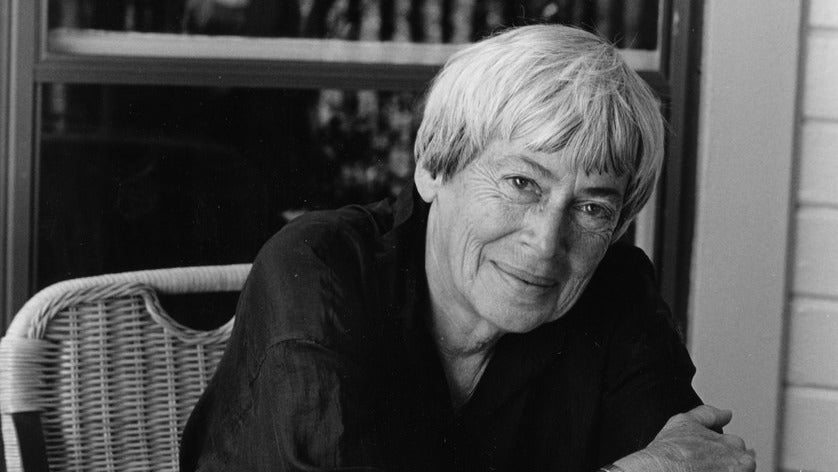 Science fiction and fantasy fans were shocked yesterday when it was announced that Ursula K. Le Guin, the iconic author of science fiction and fantasy works such as The Left Hand of Darkness, had passed away at 88 years old. Authors, artists and filmmakers alike flocked to Twitter to share memories of the acclaimed writer who helped shape modern speculative fiction. We’ve collected some of their words here, and invite you to share yours as well.

Neil Gaiman: Author, The Sandman, American Gods and so on

I just learned that Ursula K. Le Guin has died. Her words are always with us. Some of them are written on my soul. I miss her as a glorious funny prickly person, & I miss her as the deepest and smartest of the writers, too. Still honoured I got to do this: https://t.co/U4mma5pJMw

Charlie Jane Anders: Author, All The Birds In The Sky

“I still don’t have any words about Ursula K Le Guin. Her writing meant everything to me.”

“Usula [sic] K. LeGuin, one of the greats, has passed. Not just a science fiction writer; a literary icon. Godspeed into the galaxy.”

“Ursula LeGuin was my first science fiction inspiration as a kid and she continued to inspire me throughout my adult life. Her stories are permanently installed in my mind.”

I wept over Ursula Le Guin and my daughter wrote me this: “I am sorry your friend is gone. She was very important to you. She was a famous writer to you.” Yes, yes she was. #fromthemouthsofbabes #UrsulaKLeGuin pic.twitter.com/NXSBAYkBY8

“Omg…RIP to the hero Ursula Kroeber Le Guin, a tremendous human being and storyteller who helped make fantasy a more imaginative and humane genre. This is a huge loss. Damn that’s sad. Told the guy selling tickets at the cinema that Ursula Le Guin died and he went ‘I don’t know who that is uh are you ok?’ I think I had a lot of emotions happening on my face at that moment.”

“A small eddy of wind began swirling on the coast. Growing, breathing with stories, political passion, feminist power & bright spirit, the wind circled the Earth, once, twice, thrice, then flew out to the stars. Thank you, Ursula K. Le Guin. From my heart.”

She was my favorite author. I don't know what to say. Here's a piece I finished a few days ago, for The Left Hand of Darkness by Ursula K. Le Guin pic.twitter.com/RVPVhiPzak

“The Left Hand of Darkness was the first novel – and I can summon up the sensation, even now, in recollection – that when I finished it, it felt like someone was physically pressing a hand, firmly, against my chest. Stop. Feel. *Think*. RIP ma’am.”

“If you want to understand Star Trek‘s brand of sci-fi utopia, you must read Ursula K. LeGuin – and specifically her masterpiece The Dispossessed. She was one of the few sci-fi authors who carried the torch of utopia.”

“My favourite Ursula K. Le Guin quote still calms my heart, even all these years after I first read it in A Wizard of Earthsea:

How She Shaped Science Fiction:

My daughter wrote the great #UrsulaKLeGuin after reading the Earth Sea Series telling her how she had inspired her to want to grow up to be an author. She got back this note from the author.
“I hope you enjoy writing as much as I do!” ???????????????? pic.twitter.com/9Ba8BRNbXf

N.K. Jemisin: Author, The Obelisk Gate, The Fifth Season and so on

“This is heartbreaking. I always hoped for the chance to meet her. She’s one of the reasons I’m a writer now. She sent me a polite thanks a few months back, via our agents, for my (squeeful in a dignified way) NYT review of her short story collection. I did a total fangirl squee, bouncing around my little apartment. ::sigh:: And altho I didn’t realise it at the time, folks pointed out to me that the Broken Earth saga is basically ‘The Ones Who Walk Away From Omelas’ writ large. Her influence is all of my work, popping out in ways I don’t even notice ’til much later.”

“Not to harsh anyone’s science fiction mellow, but I always considered Ursula Le Guin to be the cure for Heinlein. For many of us, she blew the doors off the boys club.”

“All I can think of to say about Le Guin’s passing is that the world broke its teeth on her, not the other way around. May we all live to be as old and fierce and beautiful as she was.”