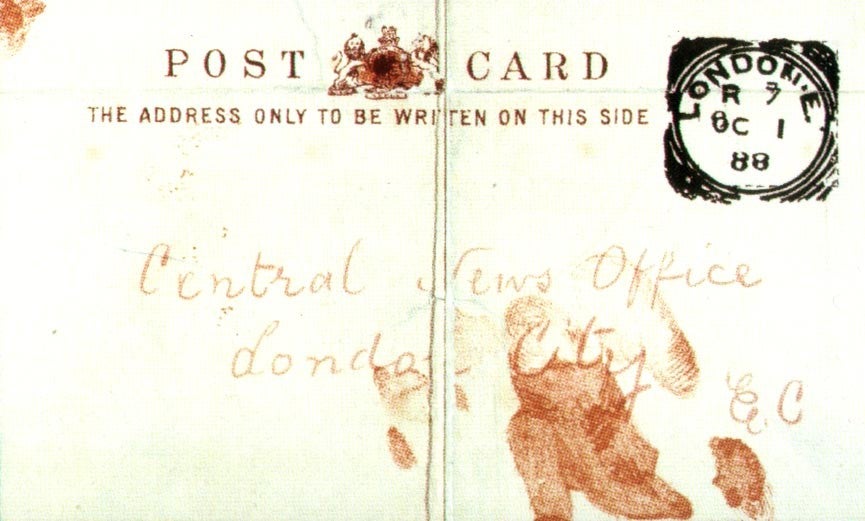 Following the brutal Whitechapel murders of 1888, London police and media outlets were deluged with letters claiming to have been written by Jack the Ripper. While discerning the authorship of these messages, a researcher from the University of Manchester has concluded that two of the earliest letters were written by the same person – a discovery which suggests unscrupulous journalists kickstarted the trend.


The front of the Saucy Jacky postcard. Both sides of the card were smeared with what appeared to be blood. (Image: Wikimedia)

As the Whitechapel murders were unfolding, London police, the media and various public officials received letters claiming to have been written by the killer. The investigators decided to make these letters public, leading to a flurry of copycat letters that only served to popularise the serial killer even further. In all, over 200 Jack the Ripper letters were received by police and the media, most of which – if not all – were completely fake.

We’ll likely never know if the real killer was the author of any of these letters, but historical evidence suggests journalists may have been responsible for the earliest ones. Police officials managed to pin a reporter named Tom Bullen to a pair of letters, and later, a journalist named Fred Best confessed to the scam, saying he did it to “keep the business alive”. Indeed, it’s been suggested that the first batch of letters were fake messages written by reporters to sell more newspapers. Furthermore, two of the most iconic letters – the “Dear Boss” letter, in which the name Jack the Ripper appears for the first time, and the “Saucy Jacky” postcard – were written by the same person, a conclusion based on a handwriting analysis.

A new study published in Digital Scholarship in the Humanities is adding credence to this theory by showing that the author of these texts, in addition to having similar handwriting, also expressed a consistent linguistic style, and that these two early Jack the Ripper letters were indeed written by the same person. This is important because prior evidence exists to link the “Dear Boss” letter and “Saucy Jacky” postcard to the Central News Agency of London by virtue of another Jack the Ripper text known as the “Moab and Midian” letter.

To connect the letters to the same author, Andrea Nini, a forensic linguist from the University of Manchester, identified linguistic constructions that appeared in both letters, such as the phrasal verb “to keep back” (meaning to withhold). Nini says it’s the first time modern forensic linguistic techniques were used to analyse these historic letters.

“Even though the ‘Dear Boss’ letter was not in the public domain when the Saucy Jacky postcard was received, they present a level of linguistic similarity – in terms of combination of words in common – that is much higher than one would expect if they were completely unrelated,” Nini told Gizmodo. “The combination of words in common between the two letters are distinctive, so that one would not expect them to be shared by chance alone.”

Nini confirmed this by looking at the remaining 200 letters. Even though most of them were produced by hoaxers who could access and virtually plagiarise the ‘Dear Boss’ letter, none of them shares the linguistic similarities uncovered by this research.

This analysis doesn’t identify the killer, or the author of the two letters, but it does nudge us closer to the journalist theory.

“There’s historical evidence that points to the journalist theory for the earliest ones (‘Dear Boss’ and ‘Saucy Jacky’) and, since this ‘Moab and Midian’ letter might have been entirely fabricated at the Central News Agency – the original [document] was never found or sent to the police – if the linguistic evidence supports that this was the same author as the Dear Boss and Saucy Jacky then we could argue that the linguistic evidence does support to the journalist theory,” said Nini. “However, this is a conclusion that should be reached by the historians, not the linguists.”

Nini’s deferral to historians notwithstanding, his paper does provide evidence linking the two early letters to the “Moab and Midian” letter, again owing to shared word combinations. Nini says the similarities are “distinctive enough to constitute evidence of an authorship link.”

Even if the journalist theory is confirmed, however, it probably isn’t going to tell us much about the killer, or whether or not there even was a Jack the Ripper.

“At the end of the day we are not even sure that the five murders were connected, and there are several theories that consider the possibility that not all the five ‘canonical’ murders were committed by the same person,” said Nini.

A possible limitation of the study is that it’s impossible to know the extent to which hoaxers were trying to imitate the style of “Dear Boss”. Nini says it’s difficult to answer this question, and he’s working under the assumption that they were in fact trying to do this. But we can’t be certain, so the new data can’t be treated as a real experiment, he says.

Interestingly, the new research could also tell us something about current events.

“In the era of fake news, the Jack the Ripper story is a very important one to investigate further as it can teach us a lot about the way our mind works,” Nini told Gizmodo. “To me, it would be more interesting to eventually found out whether these letters were fabricated by a news agency than who Jack the Ripper – if they existed – was. If it is true that it was all fabricated, it would be one of the most successful scams in history.”

[Digital Scholarship in the Humanities]