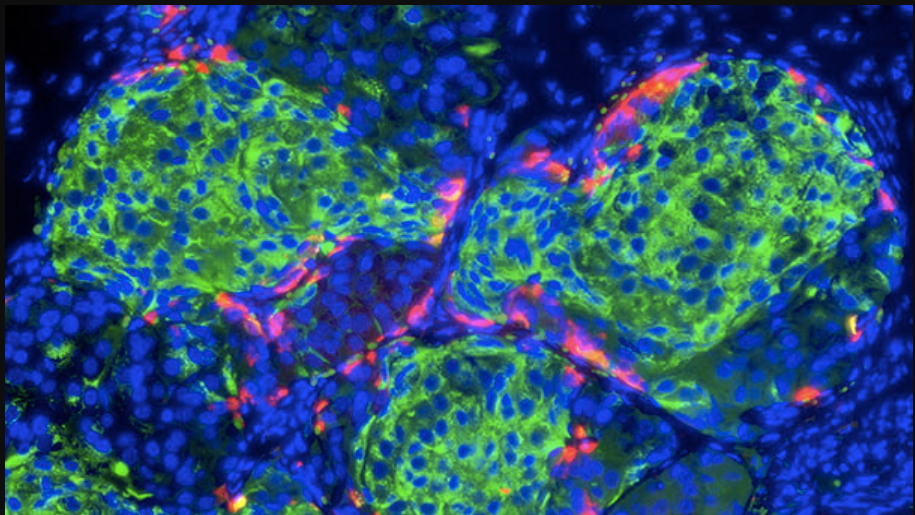 In type 1 diabetes, the body engages in warfare with itself, the immune system mistakenly treating the insulin-producing cells of the pancreas as a harmful invader, destroying the cells along with the body’s ability to regulate sugar. Typically diagnosed in youth, it has no cure, and patients face a lifetime of insulin injections and complications.


A new study published Thursday in the journal Cell Stem Cell demonstrates an early look how one day gene therapy might be used to permanently restore normal blood glucose levels in people with type 1 diabetes.

Insulin is a hormone produced in the pancreas by what are known as beta cells, and it plays an important role in the body by promoting the absorption of glucose from the blood stream in order regulate the metabolism of carbohydrates, fats, and proteins. In the average person, these insulin-producing beta cells make up the vast majority of cells in the regions of the pancreas where hormones are produced and then secreted into the body’s blood stream. The other major cell type here is called an alpha cell, which produces a hormone glucagon that elevates glucose levels in the body.

The scientists behind it didn’t expect it to work, but they gave it a shot anyway.

“Type 1 diabetes is an autoimmune disease where the body is reacting to the insulin-producing cells and killing them off and we don’t really know why,” George Gittes, a lead study author and director of surgical research at the Children’s Hospital of Pittsburgh, told Gizmodo. “If you gave patients new insulin cells with a transplant, it will kill them off. If we use gene therapy to get the body to make new insulin-producing cells in the body, logically it should attack those cells too.”

But that’s not what happened. Using what’s known as an adeno-associated virus, they deliver two proteins, Pdx1 and MafA, to the mouse pancreas that could reprogram alpha cells into beta cells. In people, this could be done endoscopically, delivering a protein-containing liquid to the pancreas via a tube that connects it to the intestine. In the diabetic mice, it required surgery. At least initially, it worked. The alpha cells began producing insulin and restored normal blood glucose levels in the diabetic mice for about four months.

“We fully expected it to not work,” Gittes said. “It was really a lark.”

Though the concept has so far only been tested in mice, it demonstrates what could be an important new area of exploration in searching for a diabetes cure. For years, scientists have been interested in whether alpha cells might be able to be reprogrammed. This new work shows that gene therapy could be one approach to actually doing it.

“An exciting development in the diabetes field is the discovery of extraordinary plasticity in alpha and beta cells,” he told Gizmodo. “Work such as that from the Gittes Lab demonstrates the way in which this plasticity can be harnessed for therapeutic purposes.”

Attie said he also imagines the approach could be useful in treating type 2 diabetes, in which there is often insufficient number of beta cells to maintain normal glucose levels.

But, as is often the case in science, the work raised as many questions as it answered. Why didn’t the mouse immune system immediately attack the engineered beta cells? What is the effect of transforming pancreatic alpha cells in the long term? And of course, how would all this work in people?

Eric Topol, a Scripps Research Institute geneticist, said that while the work was “interesting and creative” the fact that after four months the immune system started attacking those beta cells suggested that this is unlikely to be a one-time cure, and raises questions of how long those four months would translate to in humans.

Gittes said they have theories that begin to answer some of those questions. For one, he said, it could be that the re-tooled alpha cell still doesn’t have whatever it is that typically triggers an immune response even once it’s transformed into a beta cell. And after four months, perhaps the immune reaction was triggered because those engineered cells burned out, or, as Gittes put it, “ripened into true beta cell.”

Whatever the case, he is optimistic.

“In our mind four months is a long time, especially in mice,” he said. “We’re hopeful it could be decades in human.”

Gittes’ lab has already begun testing the work in monkeys. If it works in monkeys, he said, clinical trials could happen in as little as three years.