Celebrating Some Of The Best, Worst And Weirdest Sci-Fi Music Videos 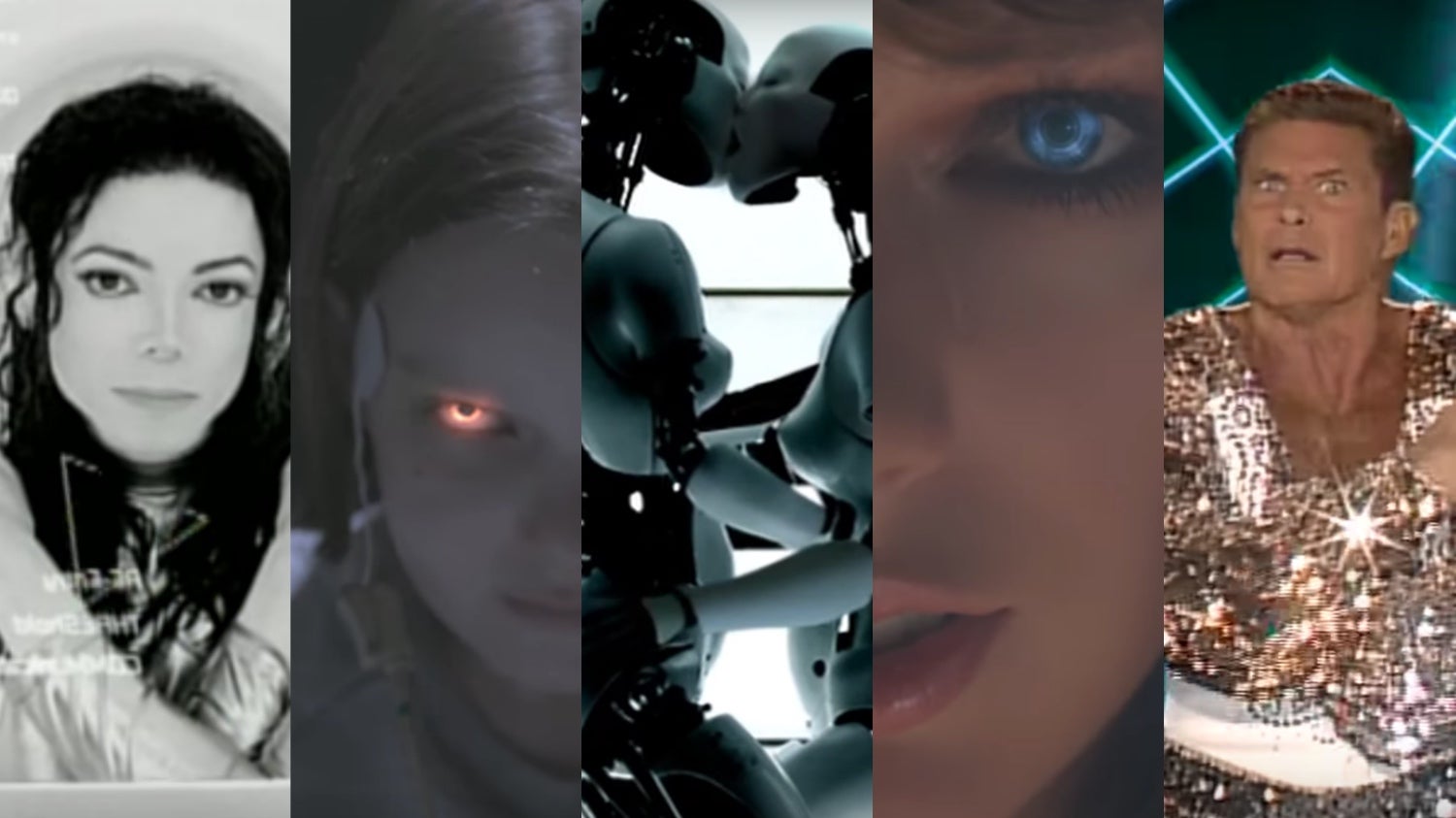 If video killed the radio star, you’d damn well think YouTube killed the need to make flashy music videos. But, magically, they’re still around, and some of them are turning out the coolest science fiction stories of the past few decades. Sure, there are some clunkers (like that time Justin Timberlake made a robot that screwed onstage), but sci-fi and music videos continue to be a perfect match.


Following the announcement that Ingrid Michelson is making an entire concept album about Stranger Things, it seemed like a great time to showcase some of the best sci-fi videos of the past few decades, along with the worst… and then a few that exist somewhere in between.

[Note: Although separated by category, these aren’t ranked in any particular order.]

Before Stranger Things, we had M83. In 2012, the French musical group released a music video trilogy that tells the story of children with psychic powers escaping a government facility. The whole series, starting with “Midnight City” and ending with “Wait”, is worth watching, but the second video, “Reunion”, definitely stands out as the best. The video is a thrilling chase in the dead of night, pitting our young heroes against a fellow child psychic with dark, threatening powers. The special effects are solid, and the music flows perfectly, creating moments of stillness within the intensity.

A space captain from the 1980s wakes up from cryogenic sleep in the futuristic world of 2016 (!), and all he can think about is fondling people. Rick Springfield’s “Human Touch” is a silly 1983 video where a bunch of people in funky space costumes dance around until they’re forced to return to their frozen slumber due to a radiation leak. Still, it’s an early example of how sci-fi videos could tell a fun, simple story. But was anybody else curious what happened to those aliens at the beginning of the video?

3) ‘Many Moons’ by Janelle Monae

It’s hard to pick only one of Janelle Monae’s sci-fi music videos above the rest – so really, 2008’s “Many Moons” is also a stand-in for just about everything she’s created so far. Monae has taken futurism in music to an entirely new level with her alter-ego, Cindi Mayweather. Her videos have drawn on classic science fiction themes, especially Fritz Lang’s 1927 silent film Metropolis, but her stories examine today’s issues, such as modern prejudice, body autonomy and self-identity. “Many Moons” is a perfect example of this, using an android slave auction as both a speculative warning of the future and commentary on current systems of oppression against black woman.

“All Is Full of Love”, written in 1999 as an ode to love in anticipation of spring (and the Norse myth of Ragnarök), takes on a life of its own in the music video – creating a beautiful, multifaceted juxtaposition between the real and the artificial. The lead robot, wearing Björk’s face, experiences a sexual awakening while trapped in a cold, sterile environment that feels like both Heaven and Hell. The video has received critical acclaim for its computer imagery and powerful story; in 2013, it was added to a permanent collection at New York’s Museum of Modern Art, and it’s widely considered one of the greatest music videos ever made.

Synth artist Perturbator released a high-concept album in 2016 that told the story of a male vigilante named the Night Driving Avenger, who works in tandem with a female android assassin to bring down a false religion. The 16-bit style music video for “Sentient” tells the story of the android, who is fighting for freedom in a world that is trying to eradicate all traces of her kind. The video is intense and powerful, using simple images to express complex emotions. It’s also very explicit, so don’t watch it at work – something I learned the hard way this week.

In the mid-to-late 1990s, there was a trend toward videos that took place in space, or experimented with gravity. This is partly thanks to Michael and Janet Jackson and their 1995 video for “Scream”. Michael Jackson was a pioneer in creating trendsetting music videos, especially ones with in-depth stories such as “Thriller”. Granted, this one didn’t exactly have the best plot in the world, but it’s important to recognise how influential “Scream” was on other high-profile videos, such as TLC’s “No Scrubs” and Jamiroquai’s “Virtual Insanity”. This video set a standard that, in some ways, still echoes today. Don’t tell me you don’t see J.J. Abrams’ take on Star Trek‘s USS Enterprise in the all-white interior of the Jackson ship.

This song has gotten multiple versions and music videos over the years, as well as that one infamous YouTube video where two women danced out the lyrics, which were painted on their bodies. However, the original 2001 music video is an incredible piece of animation, directed by Kazuhisa Takenouchi from Toei Animation. It combines many kinds of classic animation styles, including 1970s cartoons and traditional anime, to tell a fascinating story about four non-human characters who undergo a transformation to appear human. If you want more, this video was just one chapter in the anime movie Interstella 5555, which was essentially a music video for the entirety of Daft Punk’s album Discovery.

This one is pretty simple, about an android looking over footage of our screwed-up planet, but it’s one of the earliest sci-fi music videos ever created, back in 1981. So even if it isn’t the greatest one ever made, it deserves a shout-out for being ahead of its time. Plus, I can’t help but think of that Futurama episode “The Mutants Are Revolting” every time I hear it. And I love Futurama.

I’m pretty sure the only reason this spacey music video got made in 2002 was because Britney Spears had done it two years earlier. It results in one of the weirdest mishmashes I’ve ever seen, where nothing about the video matches the song at all. Shania Twain might have looked great in a leather bodysuit, but traditional country jams do not go well with motorcycle robot fights.

This one might get me some flack, but I’m totally fine with that. The alien prosthetics in this video are really impressive for 1984, but in the end the video doesn’t really do anything with them. It’s just a bunch of aliens standing around while some pyramid with Billy Ocean’s face pops in to tell them he wants to be their loverboy. It doesn’t make any sense, and not in a way that works.

I will say that I liked (most of) Katy Perry’s costumes in this music video, but over half of it is spent watching Katy floating around and making weird faces. It ends up feeling like a waste of some beautiful designs, leading the video to feel directionless until the very end. Plus, any song where Kanye West tells me he’s going to probe me is an automatic “no thank you”.

4) ‘Larger Than Life’ by the Backstreet Boys

It makes me sad that these talented men have to live with the fact that this music video exists.

For me, the biggest crime a sci-fi music video can make is serving no purpose. Taylor Swift’s “Ready For It” knows that science fiction exists, but doesn’t understand it. The video (from what I can gather) is about one Taylor Swift training some other Taylor Swift – in a Ghost in the Shell knock-off – how to use robot powers. But then the other Taylor Swift is on a horse, then she’s floating with lampreys, then the first Taylor Swift is revealed to be a robot too. In the end, one of the Taylors walks up some stairs. It looks nice, but none of it fits together. It’s just a series of sci-fi-y moments that look pretty but do nothing.

This video from 2003 is the perfect mix between alien sci-fi and Heaven’s Gate. I never thought I’d enjoy “aliens go glamping” as much as I did, but I also left with the feeling that I was about to be impregnated by some weird space cult.

Much in the vein of Kendra Wilkinson’s 2016 “Lost in Space“, Ariana Grande channelled classic B-movie sci-fi with her 2014 video “Break Free”. It involves a lot of doe eyes and dramatic face stroking, but it’s also a cute and quirky tribute to pulp science fiction. There aren’t nearly enough silver metal bustiers and lightsaber lipsticks in music videos. More of those, please.

4) ‘Spice Up Your Life’ by the Spice Girls

It doesn’t matter how many doctorate theses exist about this 1997 music video – they’re not enough. This is one of the weirdest, most tragic dystopian tales ever put to music. At first, it looks like a fun tale of the Spice Girls floating through space sending everyone good vibrations… but then the cracks start to show. Everything is Spice Girls. They produce the food, they’re projected on the TVs. Propaganda posters praising All That Is Spice are emblazoned on every surface of this dark, grimy world. I eventually realised the shocking truth: The Spice Girls are maniacal dictators, floating over their hapless citizens making sure they’re keeping in line. They don’t want you to “Spice Up Your Life” – they demand it.