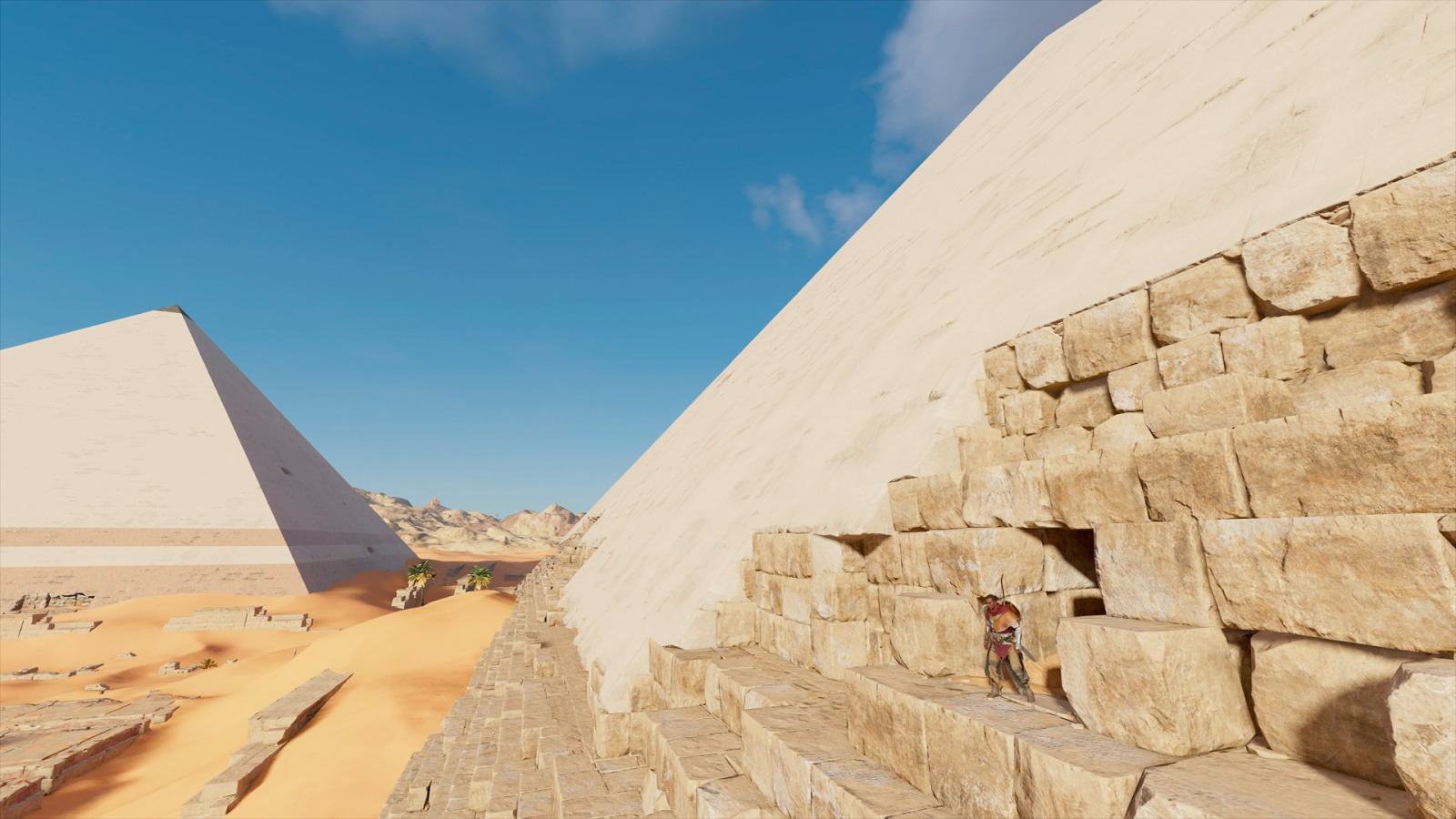 Earlier this week, news broke that scientists had discovered a previously undetected open space in Egypt’s 4,500-year-old Great Pyramid of Giza. The new Egypt-set adventure game Assassin’s Creed Origins actually won’t need an update adding the chamber, because as the game’s creators explained to me, they already thought to put one in.


In Origins, you can visit Giza as it was in around 50 B.C., in the age of Cleopatra. The game’s version of the pyramid doesn’t just include the chambers that have long been known about and studied, it includes undocumented hidden chambers and an extensive internal rampway that spirals through the internal perimeter.

By including that stuff, the game’s creators are supporting a disputed theory by French architect Jean-Pierre Houdin about how the entire pyramid was built. The hidden chambers in the game are located above the pyramid’s “grand hallway” close to where the new void was discovered. 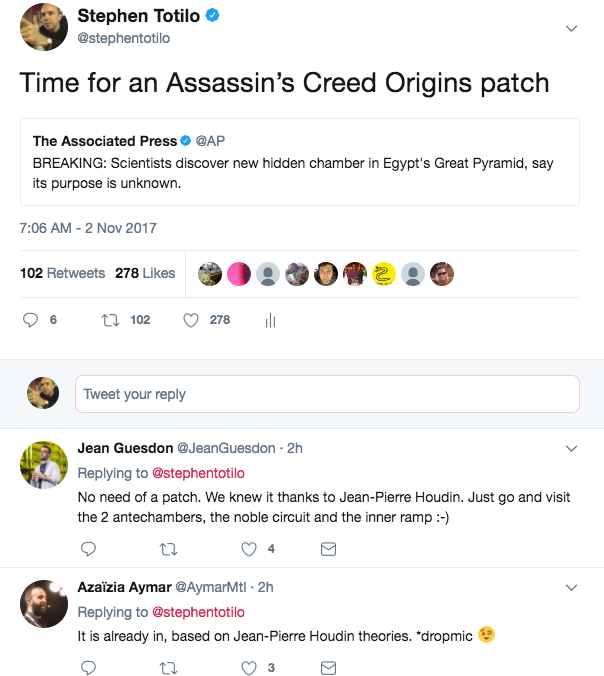 “We have long believed that Jean-Pierre Houdin’s theories about the inner ramps and royal circuit with two antechambers inside the Great Pyramid are probably the most credible, which is why we decided to use them in the game,” the AC series’ historian Maxime Durand told Kotaku in an e-mailed statement. “We were betting on the fact that these secret locations inside of the Great Pyramid would probably be discovered in the near future, so we wanted to allow players the chance to visit them in advance.”

The Assassin’s Creed developers worked with Houdin for years, according to a rep for the game, and the architect even posted a trailer for the game on his Facebook page last August.

Players who don’t know the history of the Great Pyramid, let alone the controversy over how it was built, might mistake the innards of the structure as poor game design.

From a video game standpoint, climbing through the pyramid isn’t all that exciting. It’s far less interesting a feat than climbing through many other areas in the long-running Assassin’s Creed series. But those armed with the knowledge of what’s in the actual pyramid, and who understand what the interpretation presented in the game represents, might find this to be a fantastic opportunity not just for virtual tourism but for an exploration of theoretical history. 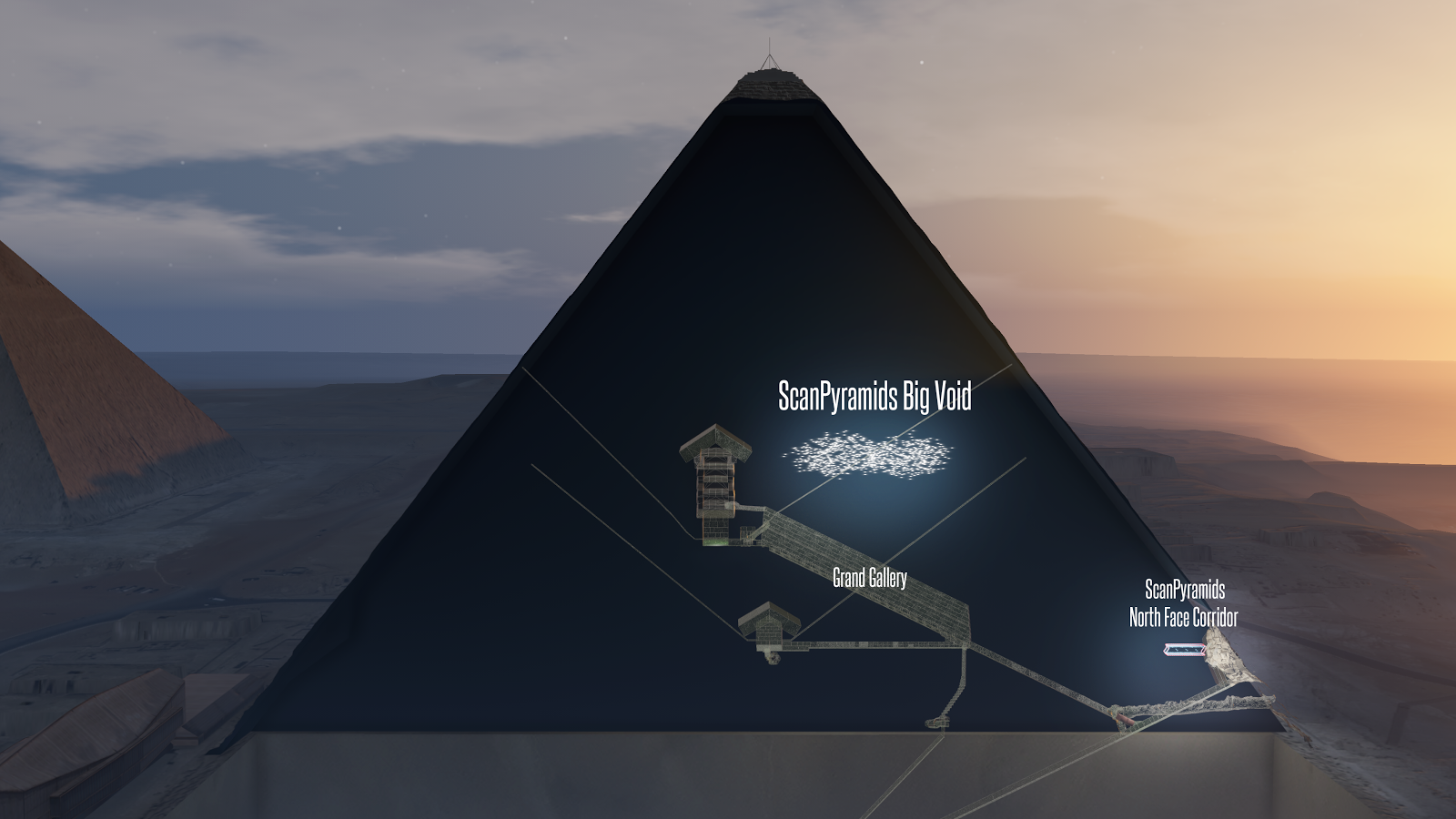 A cross-section of the Great Pyramid, by ScanPyramid a research consortium that has used non-invasive imaging techniques to discover new features in the structure, including this week’s void. The cross-section can also serve as a map of some of the passageways in Origins’ version.

When players enter an opening on the north side of the Great Pyramid they soon find themselves in undisputed space. They will stand at the foot of a long ramp dubbed the grand gallery. Perhaps they will go to the top of it, light some torches and use the game’s photo mode to take a snapshot: 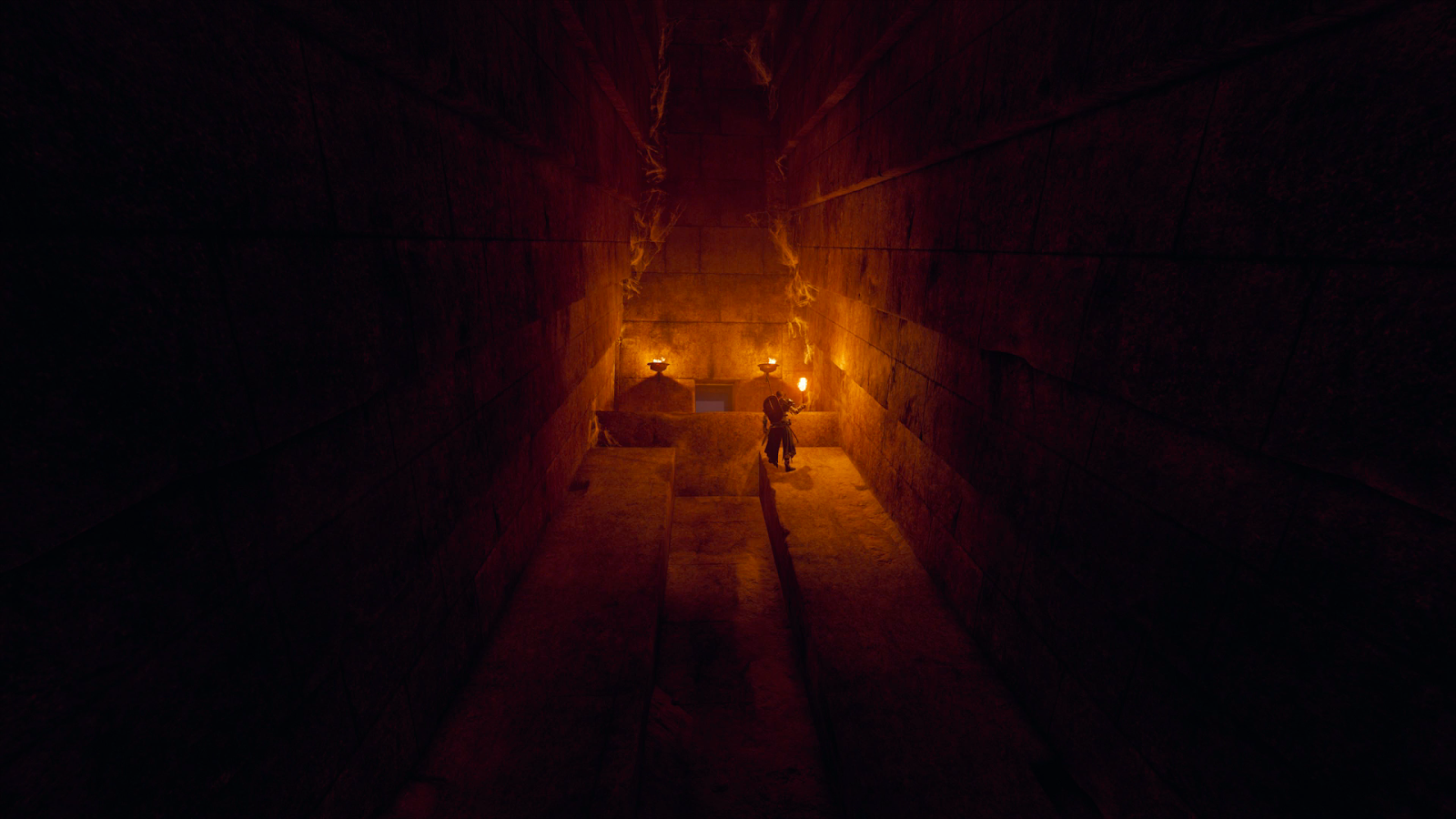 Atop the grand gallery

At the foot of this ramp is a small and uncontroversial room dubbed the Queen’s Chamber. If the player goes up the ramp and through an opening, they will wind up in the King’s Chamber, which researchers have explored and photographed: Beyond that, the game gets more speculative. In the game, a small gap in the wall of the King’s Chamber leads to two large rooms filled with treasure. These are the two antechambers Houdin speculated were in the pyramid. They sit roughly where scientists have placed the newly-discovered void. 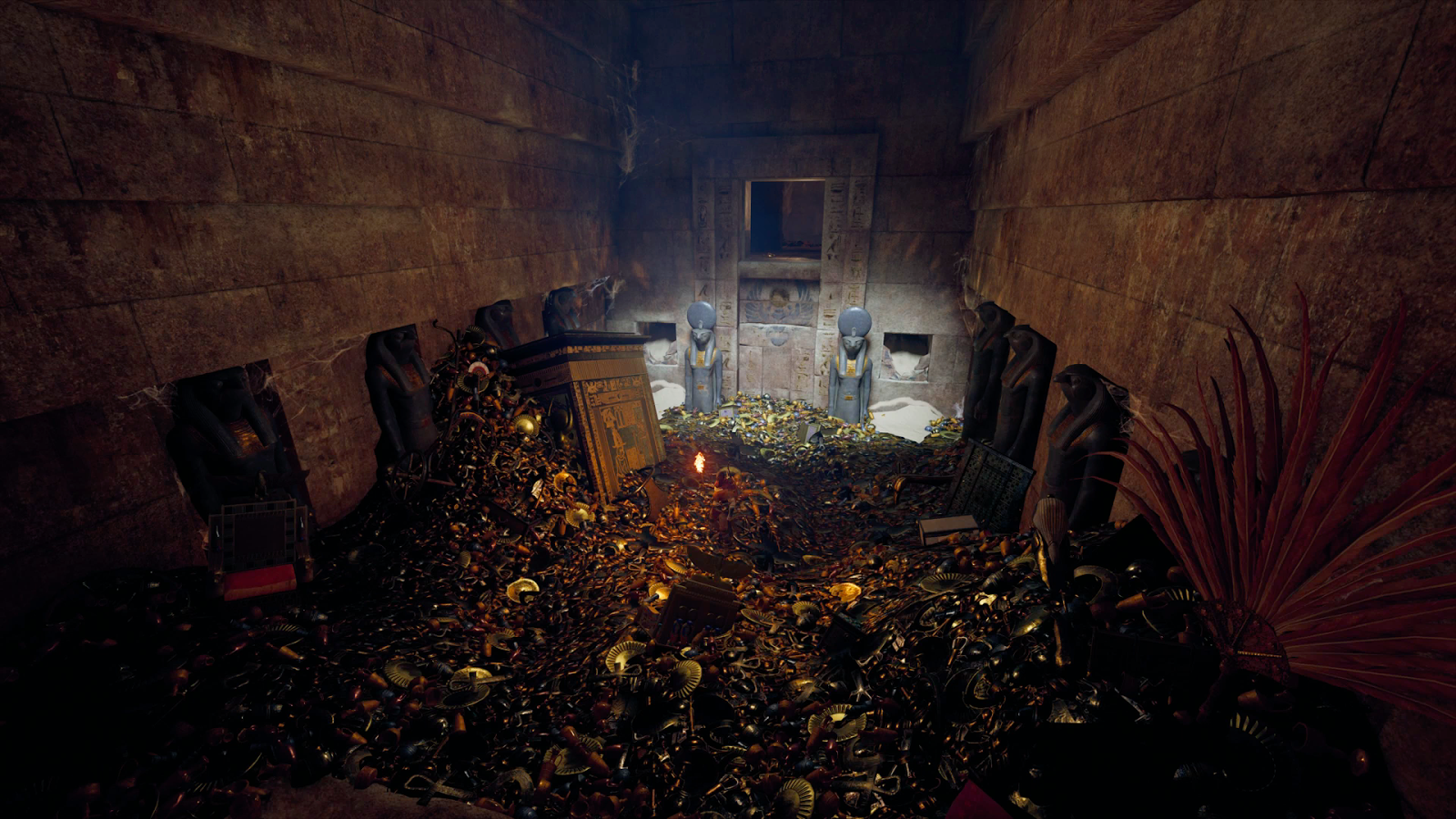 The first of two theoretical antechambers behind the King’s Chamber, as depicted in Assassin’s Creed Origins 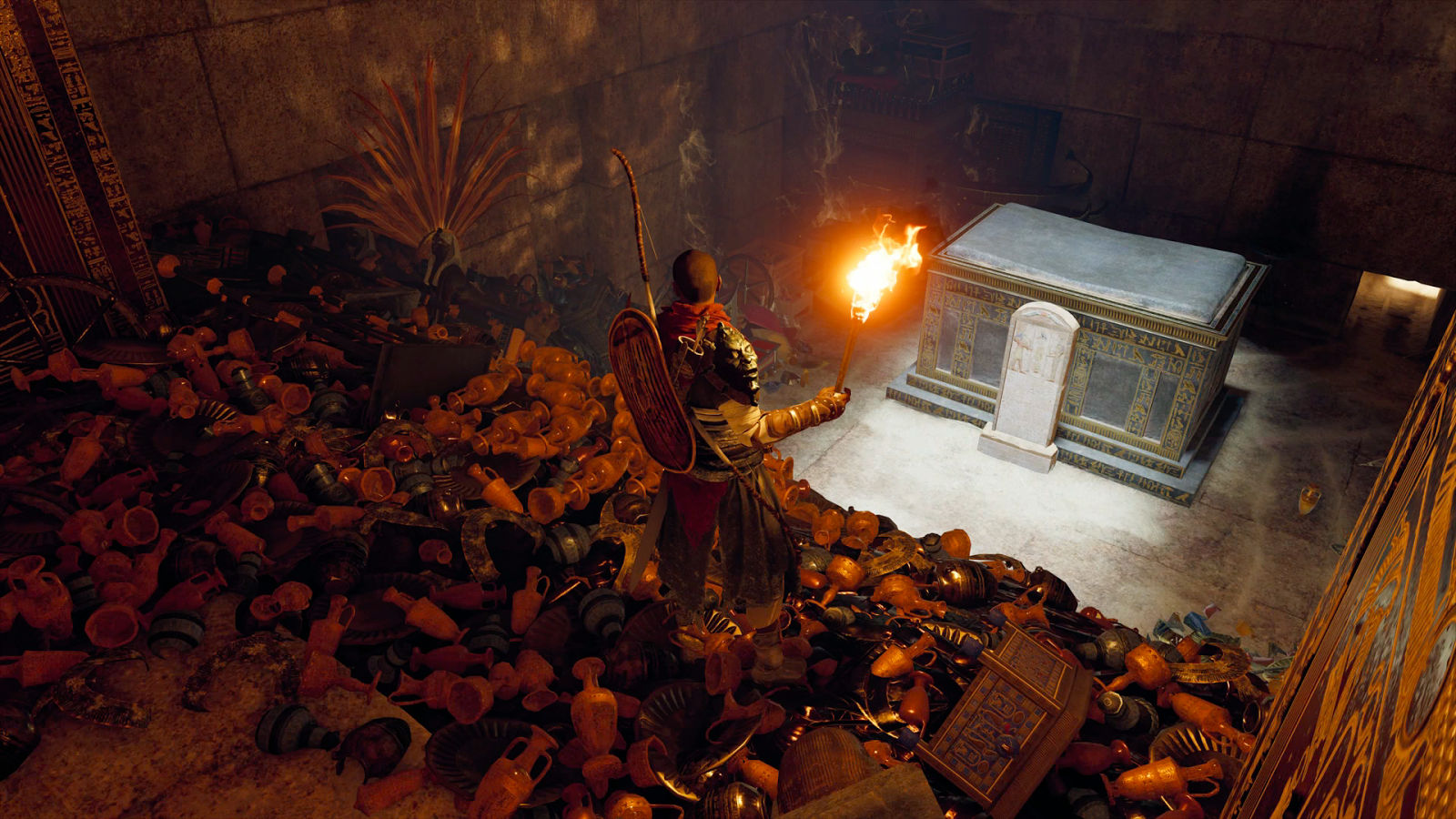 The second antechamber, which also contains the tablet players enter The Great Pyramid to discover.

Beyond the more distant antechamber is a gap that leads to the so-called Noble Circuit. This is a passageway that Houdin has postulated was used as a pathway for the pharaoh’s funeral procession. 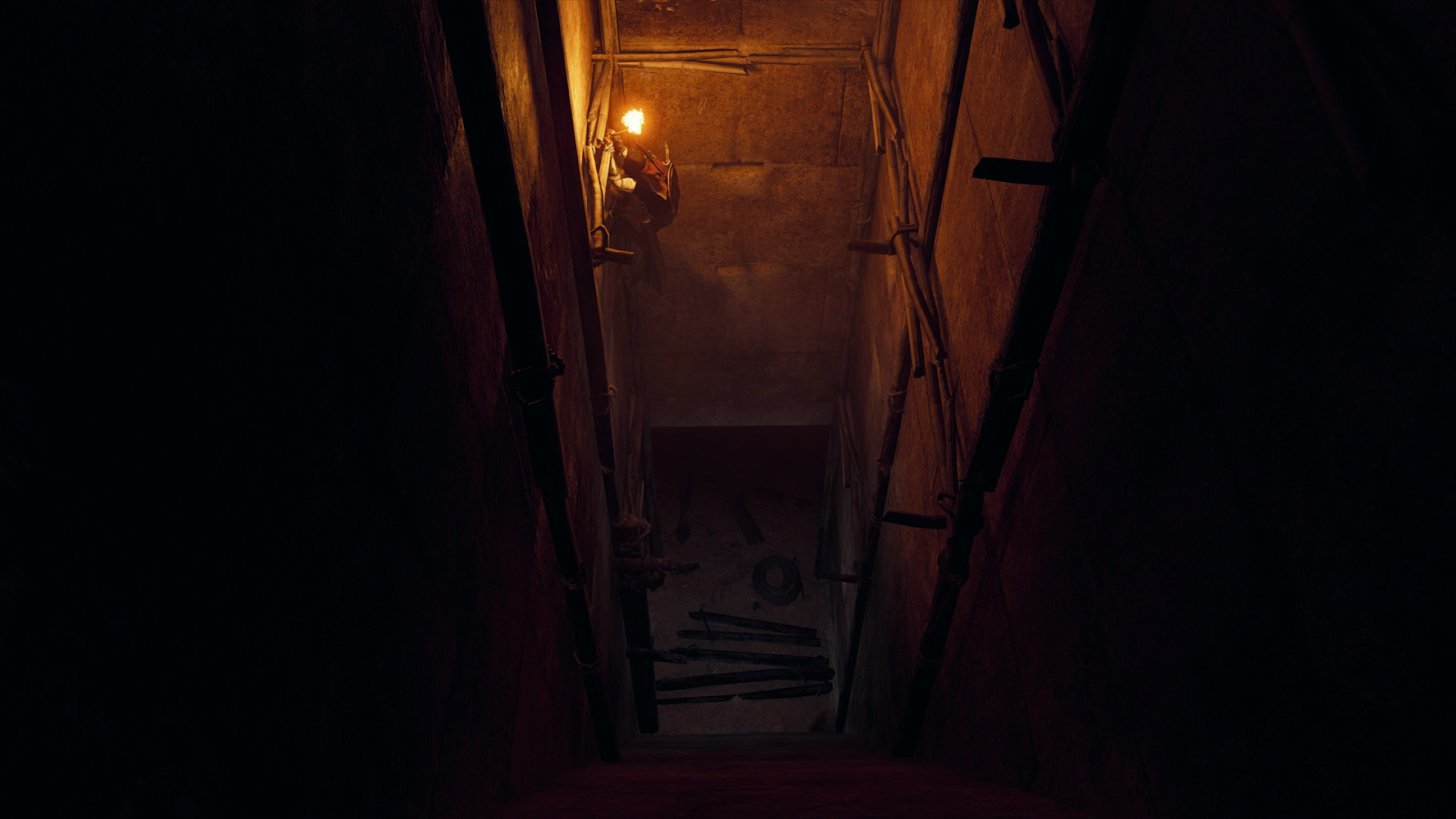 Beyond the antechambers, part of the path of the theorised Noble Circuit

In 2007, Houdin presented a contrarian theory of how The Great Pyramid was built. He disputed the idea that the pyramid’s builders used a long, gradually-elevated external ramp to build the pyramid stone by stone.

Such a ramp, Egyptologist Bob Brier argued, would need to be over a mile long. He was suspicious that no trace of it had been found, and theorised that workers built much of the pyramid “inside-out” by lifting blocks up via an inner rampway that sort of spiraled in straight lines and right angles around the pyramid’s internal perimeter.

A year later, Houdin’s claim was bolstered by the discovery of a room near one of the pyramid’s corners, something that he and Brier said could have been used to turn blocks as they were carried through the spiral.

Origins features both the straight passages of the internal rampway and one of the presumed turning rooms. Players who exit the opulent antechambers will reach part of the Noble Circuit, then the construction rampway, and then the turning room before exiting the pyramid. 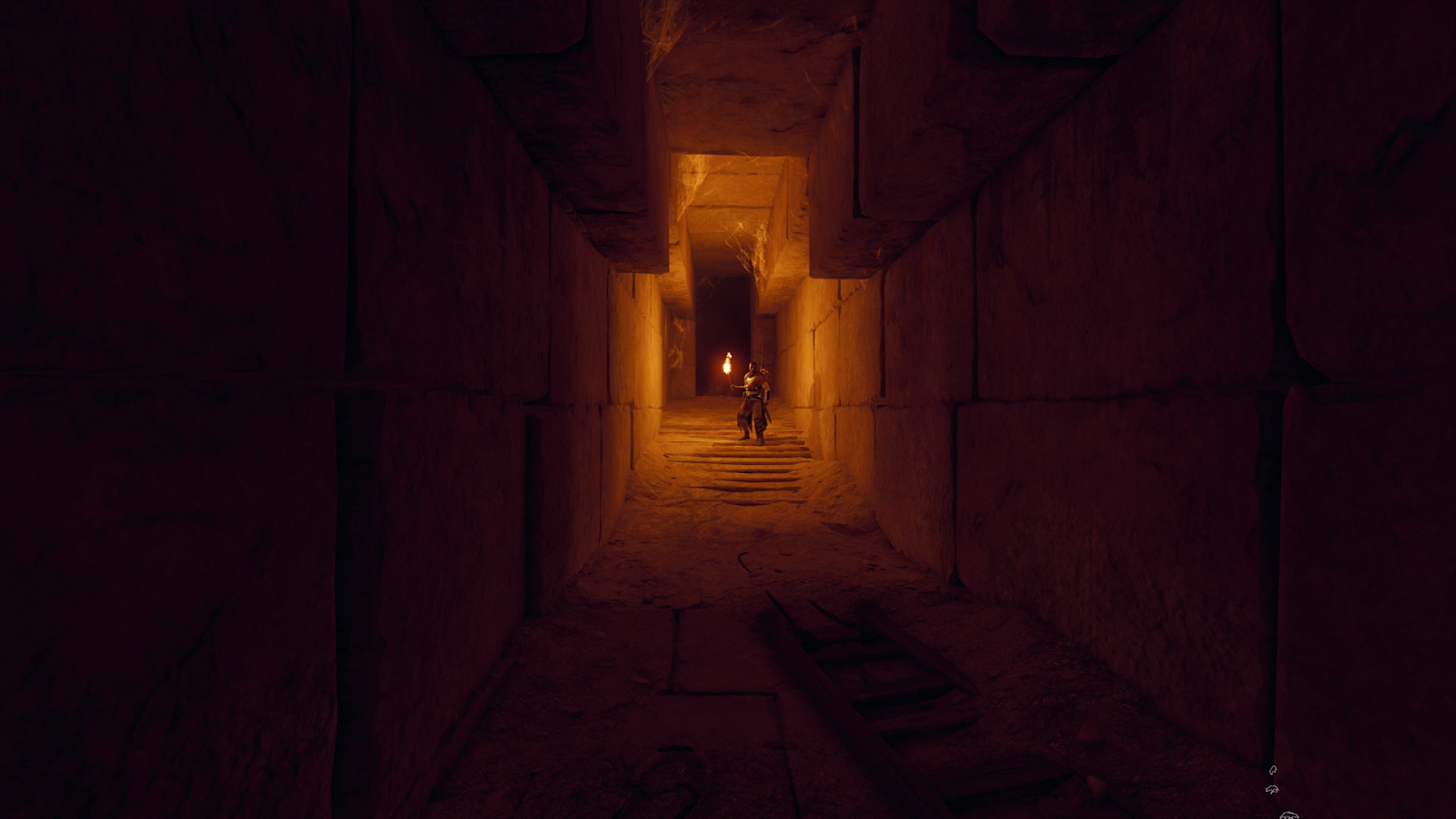 As players exit the pyramid, they will walk the long passageways of Houdin’s theorised internal ramp. The developers included ropes and even a message from a mason to enforce the idea that these would have been construction tunnels. A literally pivotal part of the internal ramp theory: Origins’ depiction of a room that would have been used for turning the heavy blocks as they were dragged up long straight internal ramps and stacked to continue building the pyramid from the inside out.

All of the passageways in Origins‘ version of the Great Pyramid are optional. Players need not even step inside the thing as they play through the game’s grand Egyptian adventure. The developers, though, have invited all players to explore it.

The game marks the pyramid as the location of one of its tomb quests, which are short, maze-like hunts for ancient stones. It’s clear from afar that the Great Pyramid houses one of these stones, and so curious players will enter. They will likely trek up the grand hallway, into the conventionally-agreed-upon rooms. But to get to the stone, they will have to step into Houdin’s theorised antechambers. To exit most efficiently, they will be leaving through the disputed inner ramp.

They will walk through an idea of what’s inside the pyramid, one that, as science catches up with theory, may look increasingly like the real thing.