I Went For A Ride In A Waymo Self-Driving Car, Which Was Surprisingly Chill 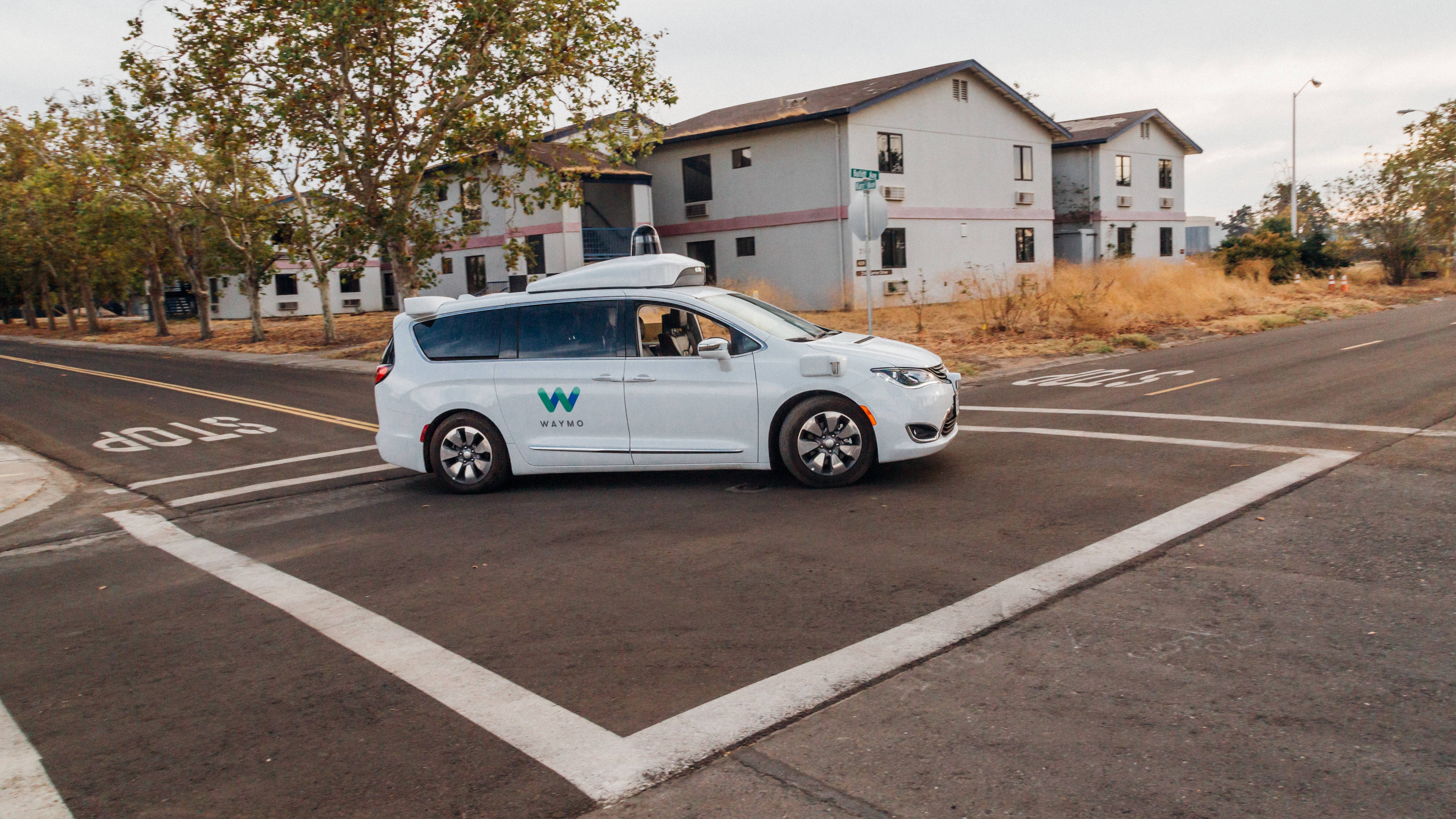 Waymo, the self-driving car group born out of Google’s secretive moonshot unit and recently spun out as its own company, has made a bunch of self-driving cars – around 100 of its current Chrysler iteration, with another 500 in the works, not to mention probably a lot more than that in the future. Yesterday, Waymo let a gaggle of reporters ride around in said Chryslers at its test facility without putting anyone behind the wheel, giving us a first look at what our driverless future will look like.

It felt just like, well, riding in a car. And that’s a good thing for Waymo, because it means that its cars feel super safe and normal and nothing like the murderous robot overlords we’ve been warned about.

Waymo bussed a group of reporters all out to its secret test facility, about three hours outside San Francisco. In exchange for access to the facility and rides in the cars, we agreed not to take photos and not to stray from a tightly controlled schedule. (And I mean tightly controlled – when I stepped away from the briefing to find a bathroom, I was escorted by two kindly security guards who waited outside while I peed and then confirmed over a walkie-talkie when I was safely back in my seat.) But the choreographed experience was worth it, because it meant I got an up-close look at what could be one of the most transformative technologies of our time. Despite all the hype around autonomous vehicles, and my own scepticism of a future in which I do not operate my own vehicle, the whole experience felt surprisingly mundane.

Waymo’s Chrysler Pacifica vans come peppered with sensors on the top, sides and bumpers – the warts of a self-driving system – but inside they look and feel largely like normal soccer mum-mobiles. Passengers pile into the second and third rows of seats. The front seats were left vacant during our spin around Waymo’s test track, but are occupied at other times by technicians who monitor the car’s movement. Tablets flip up behind the headrests to display a live map that charts the van’s route.

From the outside, the vans are a bit creepy. I felt momentary horror when I glanced up and saw one pulling up beside me, only to realise there was no one inside it and the wheel was turning on its own. It reminded me of the times when I’ve started to get out of my own car without shifting into park and felt it start to roll away beneath me. (Yes, I’ve done this more than once, which is maybe an argument for self-driving cars in and of itself.) 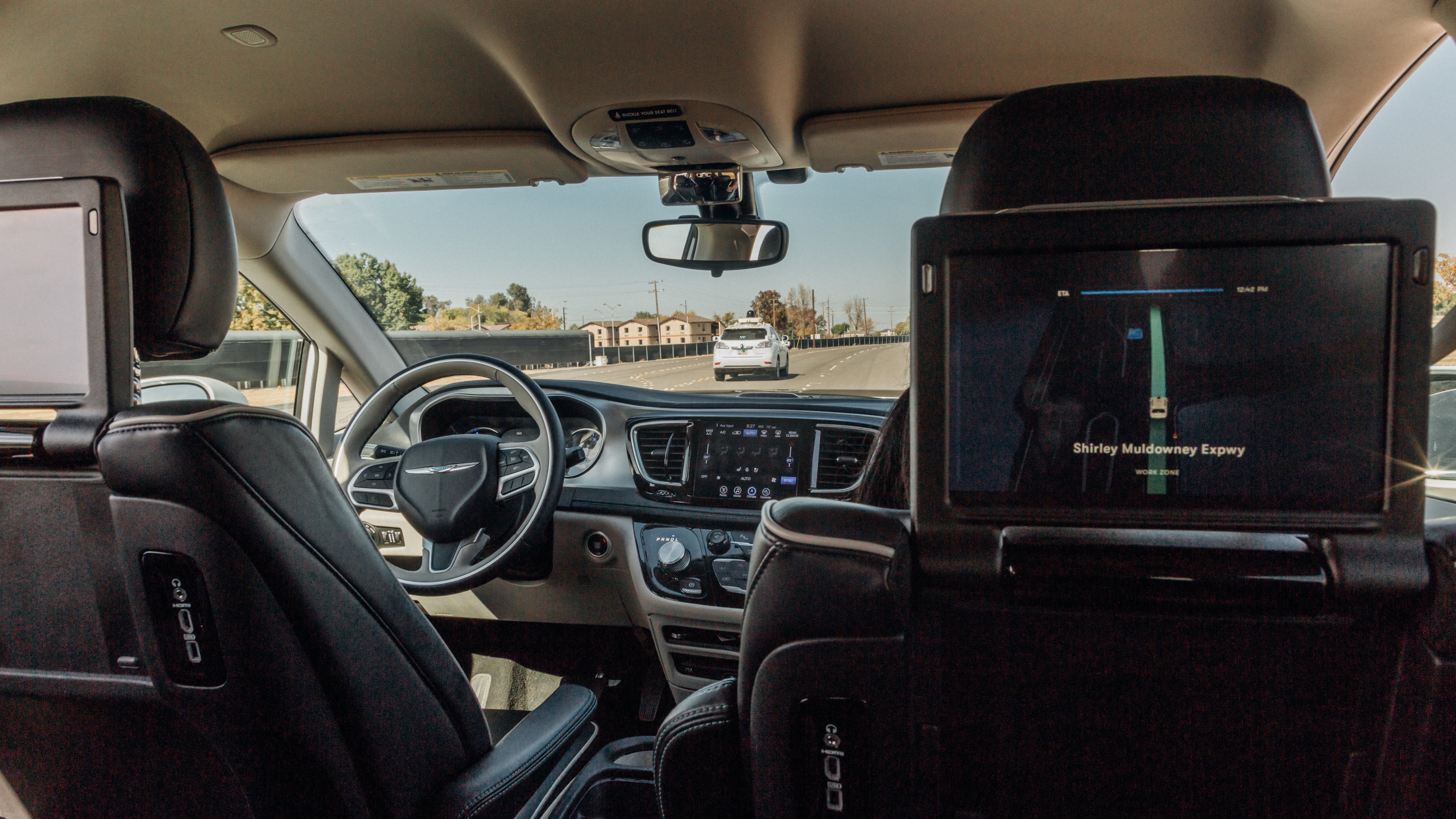 But once I got inside, I was surprised to find that I spent barely any time watching the wheel’s ghostly movements. Instead, the screens grabbed my attention. Especially from the backseat, passengers don’t have a good view of the pedestrians and cyclists that meander around the test course – so the best way to see how the van reacted to obstacles was to watch it play out on the tablet.

Waymo plans to get into the ride-hailing game, and the van tracks faithfully along a highlighted route on the map, just as it would in your Uber or Lyft app. The map shows pedestrians, cyclists, traffic lights, construction cones and other obstacles as they appear, which Waymo’s head of UX design Ryan Powell said is intended to make riders feel safer as they see their car recognising objects.

The tablets also provide context during situations in which a passenger might feel confused – for instance, if the car is waiting for a pedestrian to leave the crosswalk when a human driver might whip through it as soon as the person is clear of his bumper, that will be explained on-screen.

The cars, of course, see much more. A mix of data from LIDAR, radar and cameras is churned into a complex rainbow point cloud, which Waymo deemed too over-stimulating to display raw to riders. Instead, they get the stripped-down cartoon version of the world around them, with little pulses of point cloud every few seconds to remind them of the intricate software underlying their ride.

“We’ve obsessed over the right amount of information to show at just the right time,” Powell explained. “It’s all about curation – knowing what to show, how to show it, and how to highlight it.” Sometimes the curation works – it’s cute to see each individual traffic cone, complete with white stripes – and sometimes it doesn’t feel quite right. Bikes are reduced to faint blue rectangles that look like skateboards. Skateboards also look like skateboards. Other cars are larger blue rectangles with upturned corners – big skateboards. Only Waymo’s vans actually look like realistic cars, complete with LIDAR bumps on top. The tablet explains what’s going on when the car behaves differently than a human driver might. Photo: Waymo

Waymo has been testing its cars at this track for about six years. Back when it was a secretive project within Google, Waymo was trying to develop a highway assistance product. The company sent its engineers out on the road to test the software, but it caught them on camera texting, doing their makeup, and even sleeping while the cars cruised down the highway.

“The better you make it, the more likely the human behind the wheel is to check out,” Waymo CEO John Krafcik said. That’s why Waymo decided to do away with assistive technology in favour of full autonomy, considering it the safer alternative.

The ride, which starts with the press of a blue button in a console on the ceiling, does feel safe (although our test drive didn’t include anything close to highway speed, and that might’ve felt more risky). The van slowed slightly when navigating curves and passing other driverless vans in a way that felt overly yet comfortingly cautious. It also nudged its way out into busy intersections and braked quickly in ways that felt surprisingly human.

Former Gizmodo writer and current Vice News traitor William Turton remarked that the test course feels like a scene ripped straight from The Truman Show, and he’s right – the same man paces back and forth in front of his broken down car for hours, chatting on the phone, the same car dutifully loops the roundabout, and the same pedestrians pace through the same crosswalks. Add in the mostly-abandoned barracks that dot the test facility, and the whole thing feels like a spooky suburban hallucination. It doesn’t really help the overall effect that you can push another button on the ceiling console and a member of Waymo’s support staff will start chatting with you through the car’s speakers (although this would probably feel less creepy and more essential out on real streets). 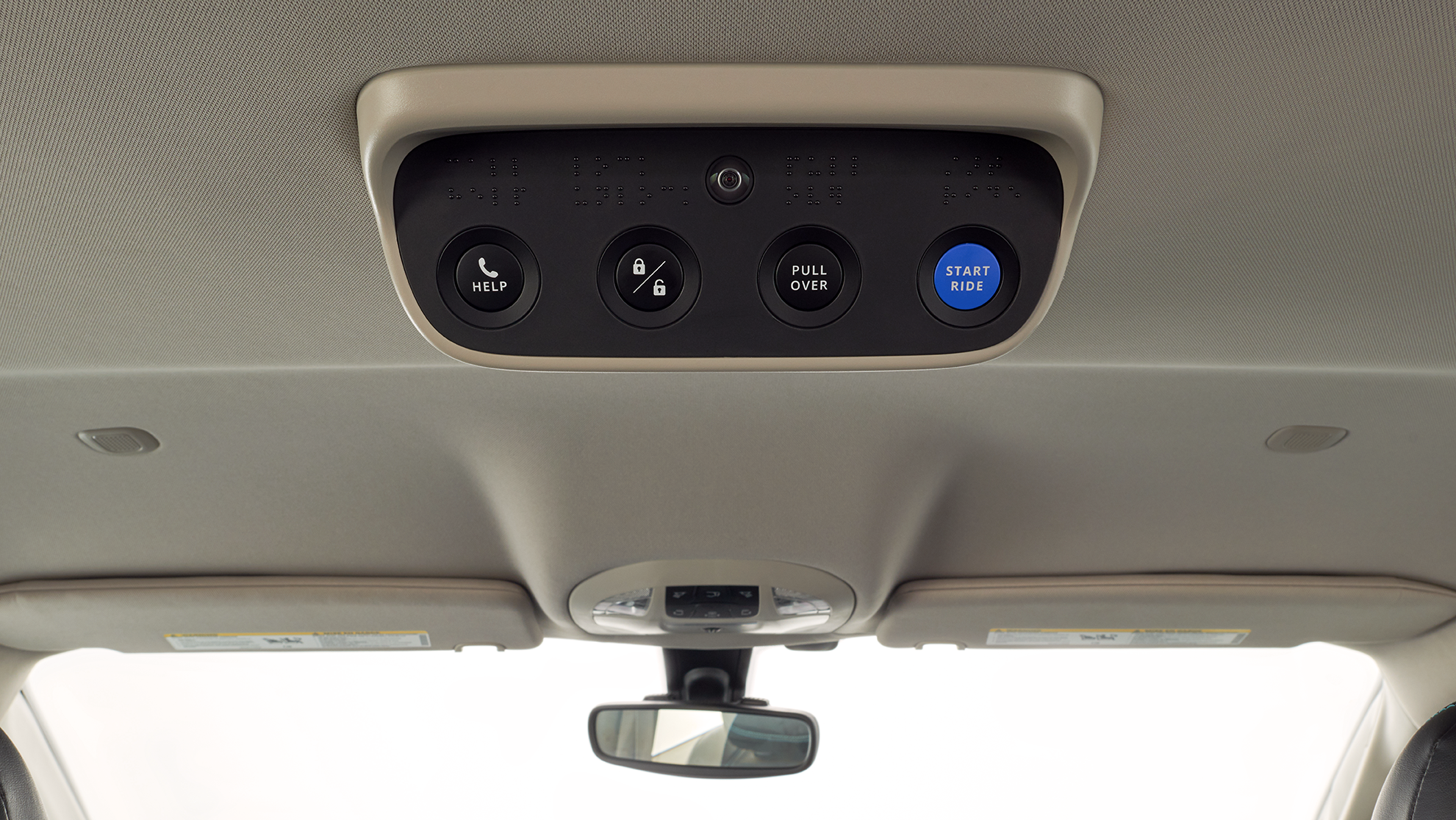 Buttons on the ceiling can start the ride or call a human for help. Photo: Waymo

But the repetitive obstacles help the cars learn difficult scenarios more quickly than they would in the real world. Waymo uses its closed course to test a variety of what ifs. What if a car backs out of a driveway without warning? What if the road has a huge pothole? What if someone comes down the ramp of a moving van and into the street, carrying a tower of boxes? What if an ambulance goes blaring past? What if it’s dark outside and we blast the whole car with water?

That learning is then compounded through simulation, which allows Waymo’s cars to drive billions more kilometres than they ever could IRL. “We have more than an equivalent of a fleet of cars, 25,000 of them, driving around every hour of every day,” Waymo’s vice president of engineering Dmitri Dolgov explained. In a simulation, engineers can add new obstacles at whim. “Most of the time nowadays we are finding that it’s the simulator that’s providing us with the ability to add most of the new features,” he added.

After eight years of work, Waymo’s cars seem pretty smart. During my ride, the car even managed to avoid running over a squirrel, which obviously wasn’t part of Waymo’s planned demonstration. But in all those years of testing, and re-testing, and even more testing, competitors have started cropping up, and Waymo needs to gets its cars out into the real world as soon as possible.

Waymo already has a group of people testing its autonomous cars in Arizona, called the Early Rider Program. On the day the public program launched, the company says more than 10,000 people signed up to participate (although it declined to specify how many actually made it into the program). Feedback from those riders helps the car get smarter, too – Waymo is exploring ways to detect when a passenger is near the vehicle to ensure a smoother pickup, and adding sounds to let blind users know when a car has arrived. Sometimes the program contributes valuable real-world knowledge. In one instance, a rider told Waymo that the location the car chose as an ideal drop-off spot was actually covered in cacti.

Going public also means that people get to poke and pry at the cars. That’s tricky for Waymo because many elements of its technology are still secret – sometimes surreally so. During one test, in which a convertible cuts abruptly in front of a self-driving car, the question arose: Can a self-driving car honk? Not in anger, structured test lead Stephanie Villegas explained. What about in other moods? Villegas demurred, and then, when pressed, confirmed that the car was “capable of honking” but said the scenarios in which it may or may not honk were best described by Waymo’s vice president of engineering, who was not present. 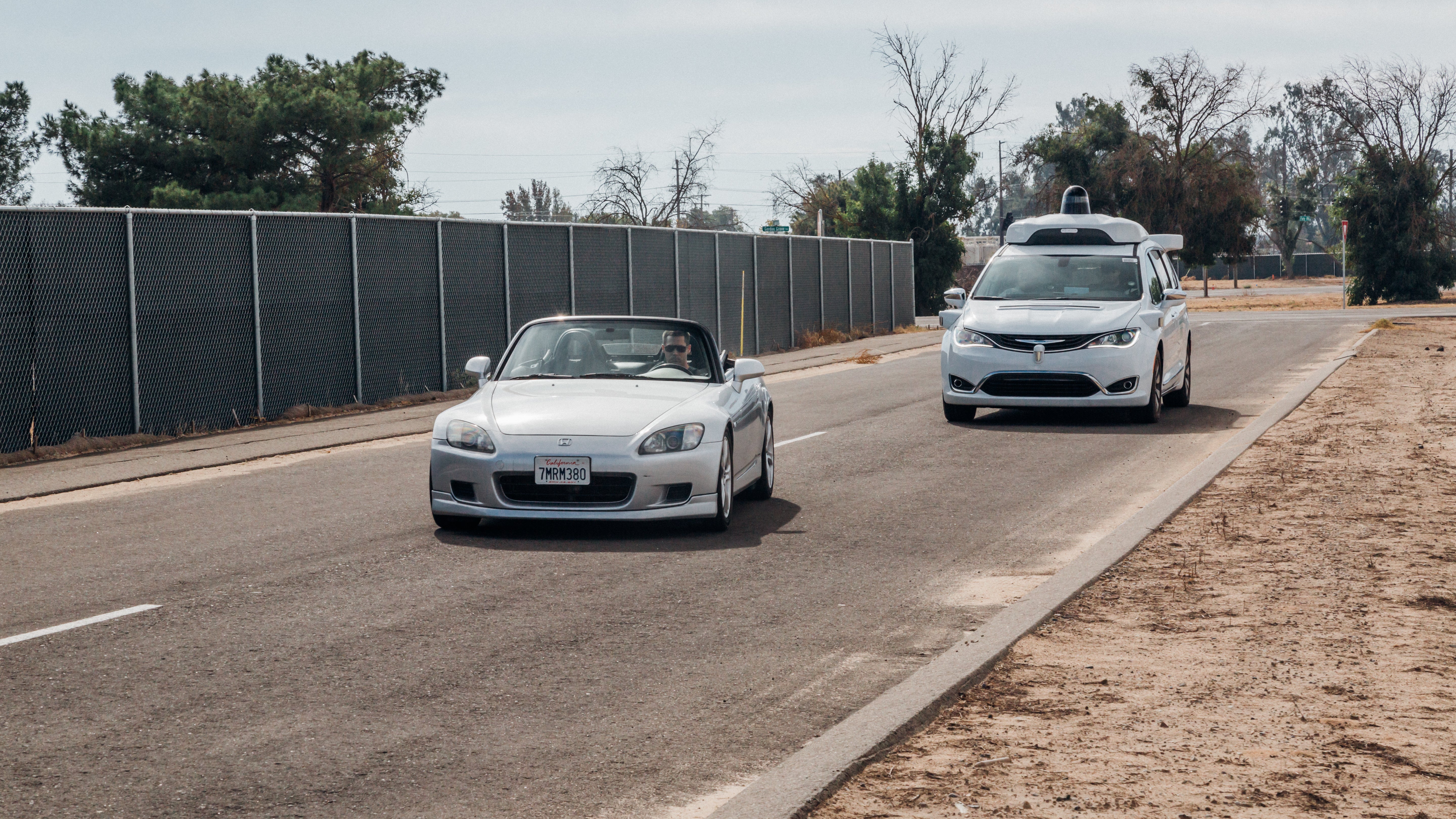 Aside from the secretive honk technology, there are a lot of functions that are supposed to be inaccessible to riders. You shouldn’t try to open the boot and see where the computers that form the car’s brain are stored, and if you reach your arm over the backseat and try to lift up the hatchback cover, the car will detect your meddling. You also aren’t supposed to try stepping in front of the cars to see how quickly they react to unexpected stimulus, which seems like a prank inevitably destined for YouTube virality.

But Waymo’s biggest challenge of all might not be keeping nosy passengers out of its trunks – it might be convincing people to stop driving. The vast majority of automobile accidents are caused by human error, but people still like to drive. Waymo needs to “transition people from the paradigm of driver, which has existed for over a century, to become a full time passenger,” product manager Juliet Rothenberg explained. Even though Waymo’s cars drive themselves, many employees still refer to themselves as drivers, which shows how attached we are to driving as a part of our identity. Rothenberg compared the connection between car and rider to a romantic relationship. “Predictability and communication are key to trust,” she said. Waymo’s vans might not feel sexy, but they definitely feel comfortable – just like riding in a regular old car.