Forget The Rick-Negan War, A Much Bigger Conflict Is Brewing On The Walking Dead 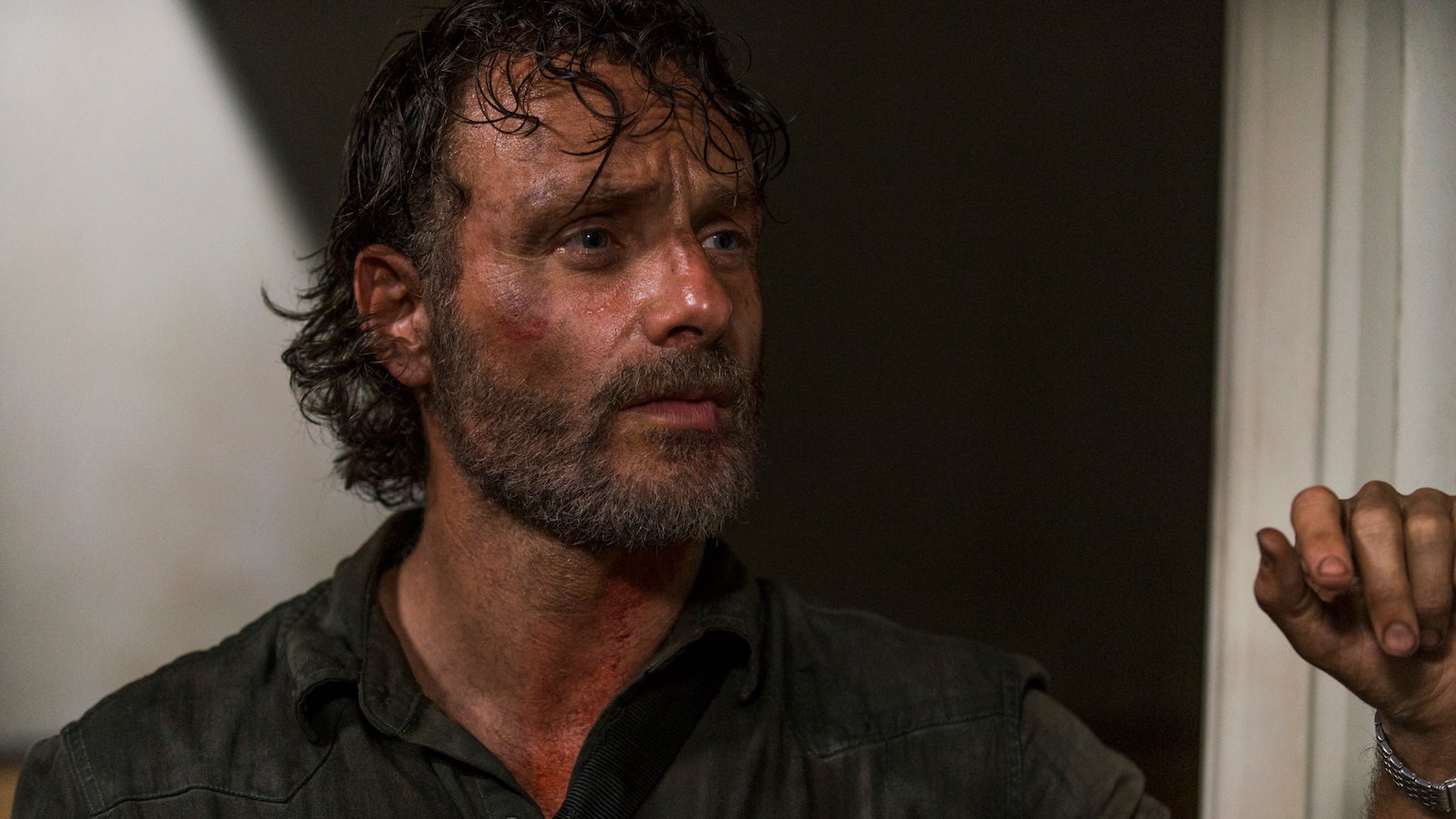 Wow. The war between Rick and Negan we’d been teased with for two full seasons may have arrived – and is still in full-swing – but a different battle is taking place simultaneously, and it’s arguably the more important one. For aeons, Rick has preached to his people it’s “us” or “them”. Now, he’s finally starting to see he may have gone too far – and for those he’s leading, it may be too late.

Basically, “Monsters” takes all the subtext of the moral quandary at the heart of The Walking Dead and makes it text. There are at least two overt conversations that set out the issue as clear as can be. The first is between Jesus and Morgan, as they escort the (very) large group of Saviors they have taken prisoner back to Hilltop. Both Tara and Morgan are furious about it; Tara assumes that Maggie will have them killed rather than let them in the colony, while Jesus hopes they can be imprisoned in some of the trailers out back until the conflict is over. Morgan, on the other hand, is obviously thinking about shooting the captives at any minute. Jesus sees the murder in his eyes, and then this conversation takes place:

Jesus: We made our decision.

Jesus: Well, nothing’s permanent except impermanence, I guess. In that way I’ll agree. But we are taking these men to the Hilltop. That’s where were going, and that’s what we’re doing.

Morgan: You know how dangerous this. Who these people are.

Jesus: No matter what they have done, they’re people. There are many kinds of danger, many kinds of dying. I kill, I’ve killed. You do, you have. But we don’t execute.

To be fair, a lot of the “good guys” of The Walking Dead have executed people, most especially Rick – and let’s clarify execution as killing those who poses no immediate danger – but it’s gotten more common recently, arguably ever since Rick executed drunk, abusive crapbag Pete Anderson back in the season five finale (with Mayor Deanna’s permission). Since then, Rick has decided all his problems look like nails and can be solved with a hammer, and that hammer is death.

But after killing that baby’s father last episode – despite it being a very clear “Rick or him” scenario – coming face-to-face with Morales has suddenly made Rick remember that there are options other than killing. He knows Morales, although it was only for a short while; despite the fact Morales has a gun on him and is calling the Saviors to take him (Negan wants Rick, “The Widow” Maggie and “The King” Ezekiel taken alive), Rick decides to try another way. 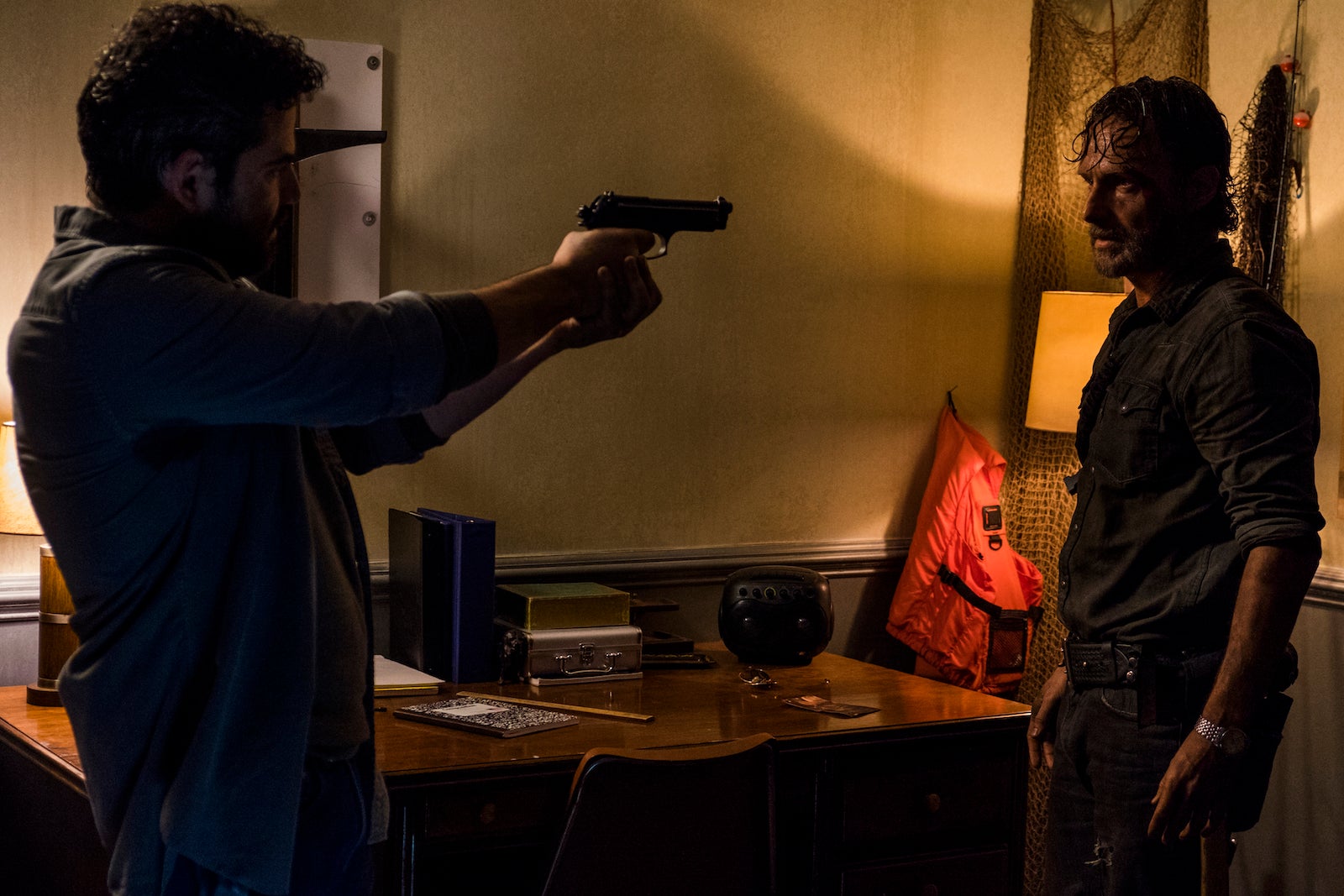 Morales won’t have it, though, because he knows who Rick has become, because having joined the Saviors he’s become the same thing. I’ll let him explain it (although I’ve edited it a bit for clarity because Morales is a bit of a rambler).

Morales: As soon as I saw you. I knew you’d made the same choice as me. From there to here. Shit. Well, I guess we ain’t the same guys we used to be, huh? ‘Cause you’re a monster.

Rick: We’re not the same.

Rick: Look at you.

Morales: Look at me? Look at us, Rick. Look at us. We’re two arseholes who’ll do whatever we have to just to keep going. The only difference is I’m the one holding the gun. That doesn’t make me any worse than you, Rick. That just makes me luckier. ‘Cause let’s face it. If it wasn’t me? If it was you holding the gun? I’d be brains out on the floor right now.

Rick: You don’t know that.

Morales: And you do? Huh?

Rick: I know I wouldn’t want to.

Morales: Come on. Is that the best you can do?

Rick: I’d at least try to find another way.

Morales: Yeah? Why? ‘Cause we knew each other for a few days back at the start?

Morales: You want to know what I think? I think you can talk all you want. You can say all the words – Lori, Shane, Andrea, Glenn – they’re all dead. Somewhere along the way, Officer Friendly died right along with them. Just like I did. With them. That’s what I know, Rick.

Morales is 100 per cent not wrong. Rick hasn’t tried to find another way in years, and it’s literally only this moment – after realising he killed a father protecting his baby, then seeing someone he used to know – that he finds himself wanting to resolve this situation without killing. But that’s when Daryl pops in and shoots Morales in the head with a crossbow.

Rick shouting, “Wait, no!” to Daryl was satisfying to me, just as it must have been to Herschel up in post-apocalyptic zombie heaven, even if it was too late. There was a real possibility that Rick could have gotten Morales to switch sides, but Daryl killing him – when he could have easily stuck him up from behind and forced him to drop his gun – erased that possibility. That, coupled with the baby Gracie situation, leaves Rick shaken.

And the hits keep coming. At the end of the episode, a lone Savior fires at Rick and Daryl from behind a tree. Realising the guy has to be alone, Rick tells him to drop his gun and come on out; Rick gives him his word that if he tells them what they want to know, he can take a car and leave. The Savior does so, and explains that the guns Dwight had told them were there had been moved the previous day to another compound. And that’s when Daryl shoots the Savior in the head, too.

Rick is incredibly dismayed, but he has no one to blame but himself. In the very last episode, Morgan distinctly remembers Rick’s instructions to the group “to kill them all”, more specifically that they have to kill them all to be safe. For that Rick, mercy was not an option. 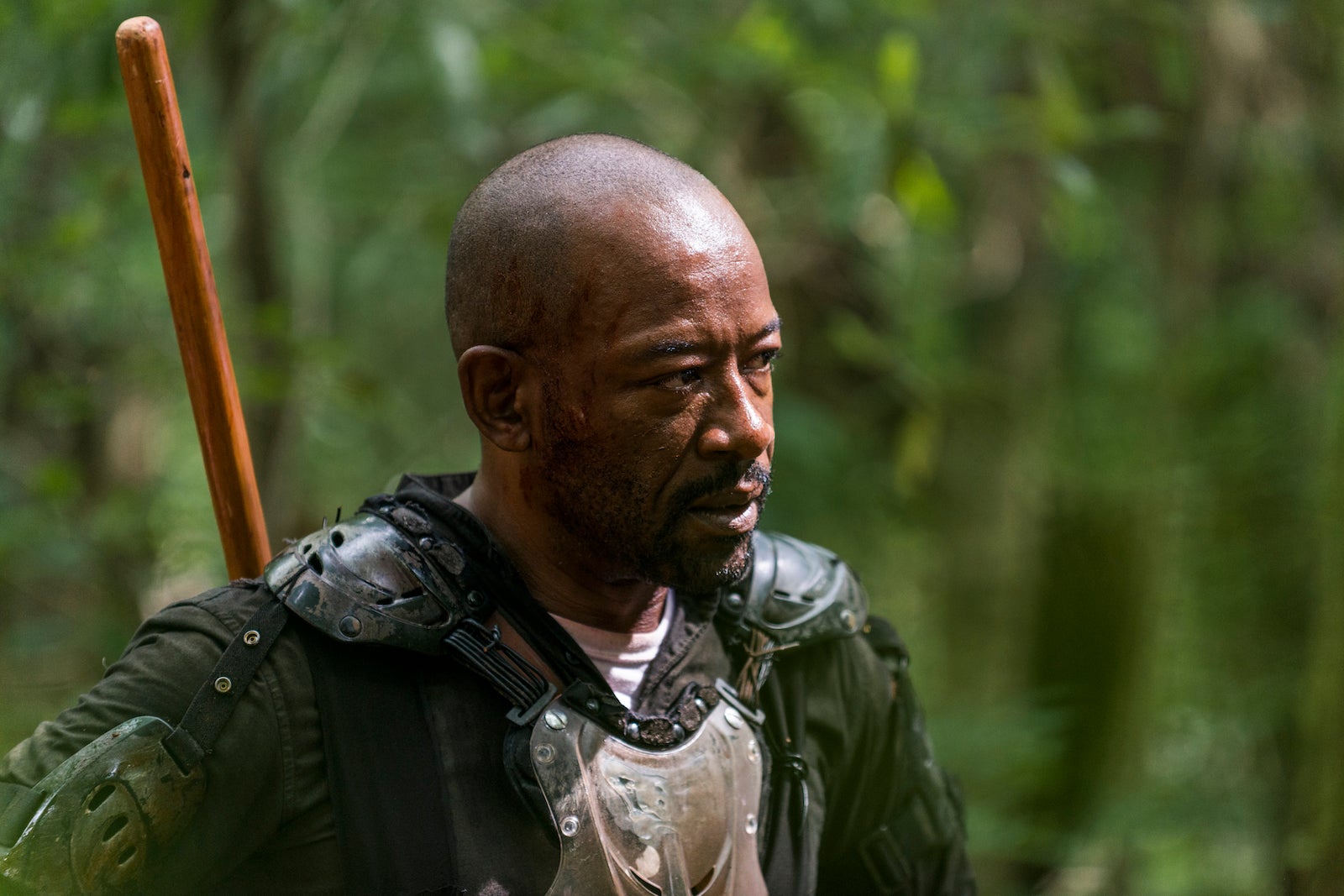 It’s a lesson that Morgan has taken to heart, and hard. He’s gone back to the dead-inside killing machine he was before he met Eastman and became TWD‘s temporary Prince of Peace, the role now held by Jesus. So when there’s a surprise zombie attack, and a group of tied-up Saviors use the chaos to escape, Morgan is all too happy to run through the woods to hunt them down to kill them. Since their hands are bound and they’re tied together, it isn’t that hard for him to catch up and shoot one down, but Jesus stops him from killing a second. Morgan is fed up with Jesus’ mercy, and attacks him.

To be clear: Morgan wants to kill the unarmed prisoners so badly that he’s willing to fight – maybe even kill – his comrade Jesus to do so. I’ve certainly thought The Walking Dead can be dense sometimes, but I can’t imagine that they want anyone to believe that Morgan is in the right here to attack Jesus. It’d be as if he were attacking Glenn, another guy who wouldn’t execute anybody, no matter what Rick preached. Jesus takes Morgan down, although not easily, and Morgan leaves, saying he “can’t be part of this” – “this” being not killing their prisoners. The rest continue to Hilltop.

At Hilltop, this all comes full circle when Gregory the Weasel arrives and begs to be let in. He’s betrayed Hilltop to the Saviors, threatened to evict families, and arrived in Gabriel’s car without Gabriel. He has no skills other than sucking and being weaselly, neither of which would help him survive if Maggie refuses to let him back into Hilltop. Eventually, after it’s clear she won’t be letting him in, Gregory stops posturing and admits he fled because he was scared, and that he joined Negan because thought the Saviors would win. It’s not really an apology, and Maggie is smart enough to know that – and to know that if he lets him in, he’ll still be weaselly and crappy and pose a potential danger. But she lets him in, instead of leaving him outside to die. She chooses mercy.

And that’s when Jesus, Morgan, Tara and several dozen tied-up Saviors show up, and the micro-problem of whether to spare Gregory becomes the macro-problem of what to do with all these prisoners. Putting them in the trailers means bringing enemies inside the walls, exposing the families there to danger, and presumably wasting precious food supplies on feeding their enemies. Killing them means removing the possibility that they will attack again… but it also means that they will have to dig a mass grave. That’s… that’s not good.

I’m still apprehensive, because for the past several seasons any time it looked like Rick and the others were approaching a moral quandary they would simply start firing, but I don’t recall The Walking Dead ever being so direct and overt about asking whether compassion has a place in a world like this, and if there’s a value in showing mercy to those that would do you harm. Based on the first two episodes, this will clearly be the question of the season (or at least the half-season). Based on all the seasons that have come before it, however – and Rick’s red-rimmed eyes from the premiere – I’m afraid we already know what the answer is. 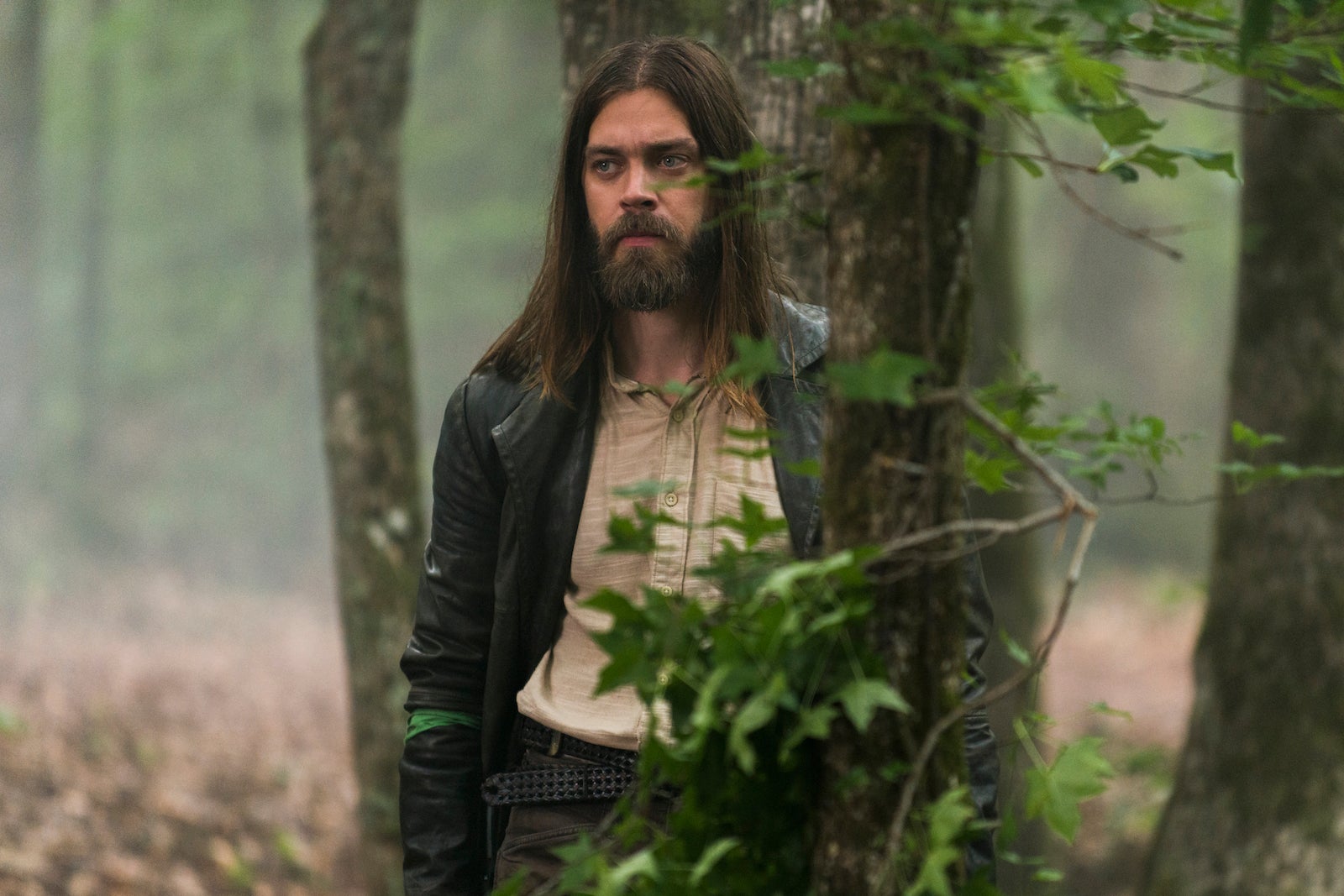