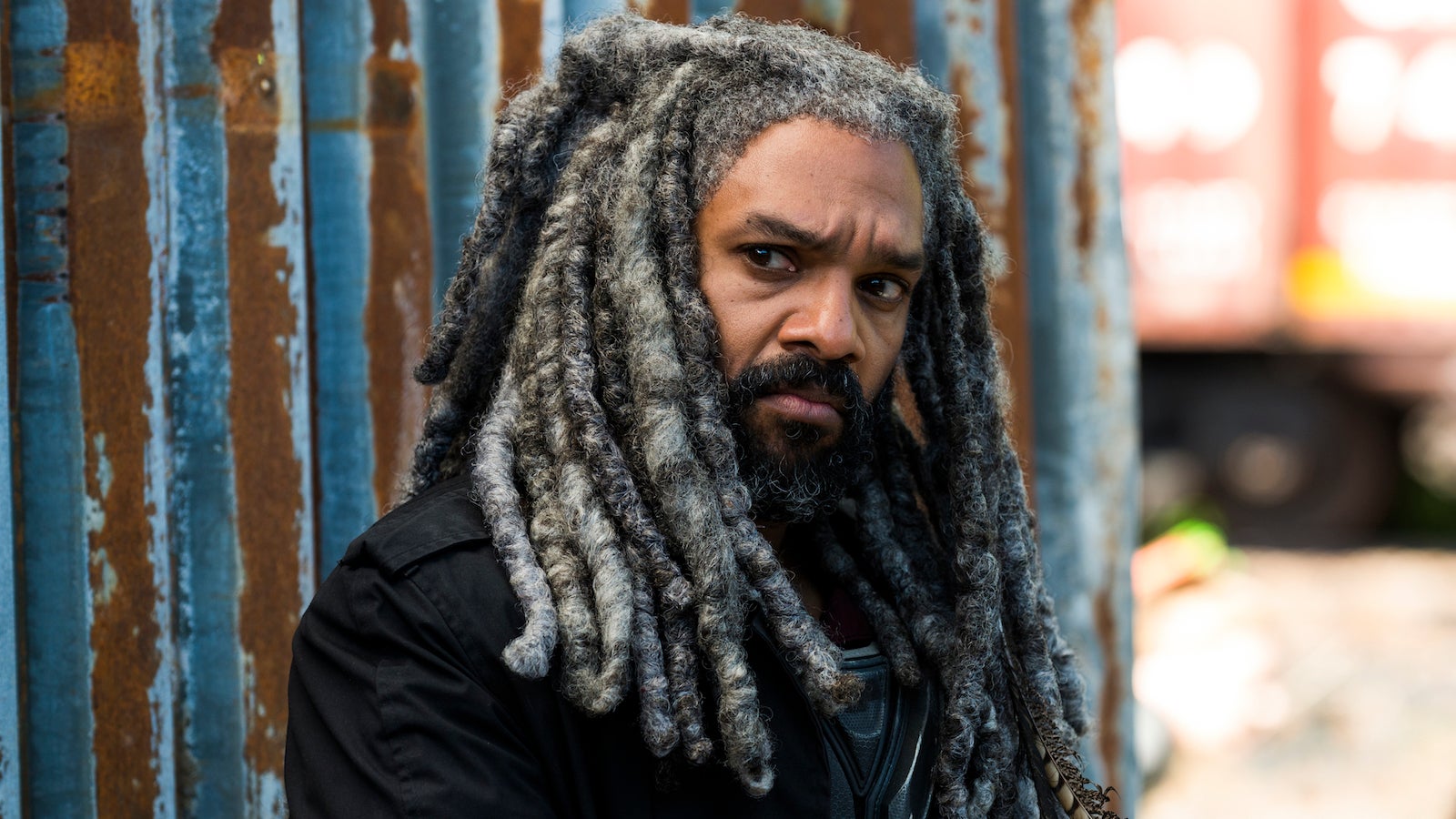 When we last left Ezekiel, he and the soldiers of the Kingdom were getting shot to hell by a giant Gatling gun located at the top of the Saviors’ compound, shortly after about three solid hours of the king gloating that not a single of his people’s lives would be lost this day. Obviously, Ezekiel was rather wrong, but as this week’s episode showed his day just got worse from there.

I really enjoyed “Some Guy”, I think primarily because since it was mainly focused just on Ezekiel it actually had time to tell one specific story, while it still functioned as part of the season/simultaneous assault on the Saviors. It was like the still-fantastic “Clear” in that regard, although the story “Some Guy” is telling is much, much simpler. And I’m sure I’m still grading it on a curve after the annoying, dawdling seasons six and seven, too. But watching the show basically break Ezekiel down into his component parts was compelling, even if it wasn’t particularly surprising or deep – and it certainly helped that it was sprinkled with moments of badarsery from Carol, Daryl and Rick, too.

Basically, Ezekiel is horrified to wake in a pile of corpses of his own people and is further horrified to see he’s the only (apparent) survivor. His troops have literally been shot to pieces by the Gatling gun, and the show gives us a montage of those pieces and torsos and so forth. Ezekiel is horrified yet again when the corpses that have most of their parts intact start waking up and trying to eat him, especially since he’s been shot in the leg and can’t walk.

Again, his day gets worse from there. As he’s about to be eaten, he receives one of four(!) last-second saves that take place over the course of this episode. Unfortunately, it’s courtesy of a Savior who wants to take the King alive to Negan as per instructions (along with Rick and “The Widow”). I didn’t catch the Savior’s name, assuming he gave one beyond “Negan”, but he has a short mullet and giant glasses, meaning he looks exactly like Joe Lo Truglio’s character in Wet Hot American Summer or an older version of me in Year Four.

For some reason, this dude knows Ezekiel’s story, or at least has formulated a very accurate theory that he was not a member of some actual secret royal family hiding in America but was a dude who was pretending to be a king, whose authority basically came from the fact he’d managed to get his hands on a pet tiger. (Dude guesses Ezekiel worked as a circus; we know Ezekiel actually worked at a zoo. Good guess, dude!) It’s weird that this guy somehow knows enough about the spiel Ezekiel has been using to keep the Kingdom together to call him out on it – he even says, “Take away the tiger… and you’re some meaningless con man in a costume,” which is very on the nose – but that, coupled with the fact he got his soldiers slaughtered, is bumming King E out tremendously.

Since Dude is forcing Ezekiel to limp forward on his injured leg (with his cane), they’re moving pretty slow, and all the ex-Kingdom guys-turned zombies are almost upon them. Just as Dude decides he should just bring Ezekiel’s head back, Jerry – huge, lovable, Right Hand of the King Jerry – pops in out of nowhere and cuts Dude in twain with his axe (last-second save #2). Jerry leads Ezekiel to the gate to the compound, hoping to get inside, but it’s chained up, and they’re surrounded by the zombies of their former kinsmen anyway.

Meanwhile, apparently, Carol was the only person in on the assault that managed to get into the building to sweep it before hell broke loose. There are only a few Saviors in there, but when Carol spies some of them packing away the gun and trying to transport it down to a truck, she basically goes Die Hard. She shoots down the entire first group of Saviors, but a new group stops her from grabbing the gun. She chases them outside to their truck, and has another firefight with them. I shan’t bore you with the specifics, but Carol does badarse things until she sees Ezekiel and Jerry fighting for their lives, and has to choose between saving them or getting the gun.

She chooses them (last-second save #3) while two Saviors drive away with the Gatling gun… or so Ezekiel worries. But Carol hears the telltale sound of a motorcycle motor, and knows the guns will be sized shortly. Daryl and Rick, having gotten the info that the gun was transferred to this compound from the guy who surrendered (and then Daryl shot) last week, have driven like hell to join the Ezekiel/Carol group, but when they saw the truck driving have instantly surmised it must hold the weapon they have been searching for. (It’s an extremely convenient revelation, but The Walking Dead has asked us to take much, much longer leaps before.) One of the Saviors has the gun set up in the bed of the truck, Daryl wipes out in his bike, the Saviors’ truck swerves to avoid some zombies, Rick blocks the road, Daryl returns and shoots the dude in the back, Rick jumps in the truck, kills the driver, it careens off the road. Bottom-line, Rick is fine and now Alexandria has a Gatling gun too ho ho ho. It’s a fun action scene, if not particularly innovative. 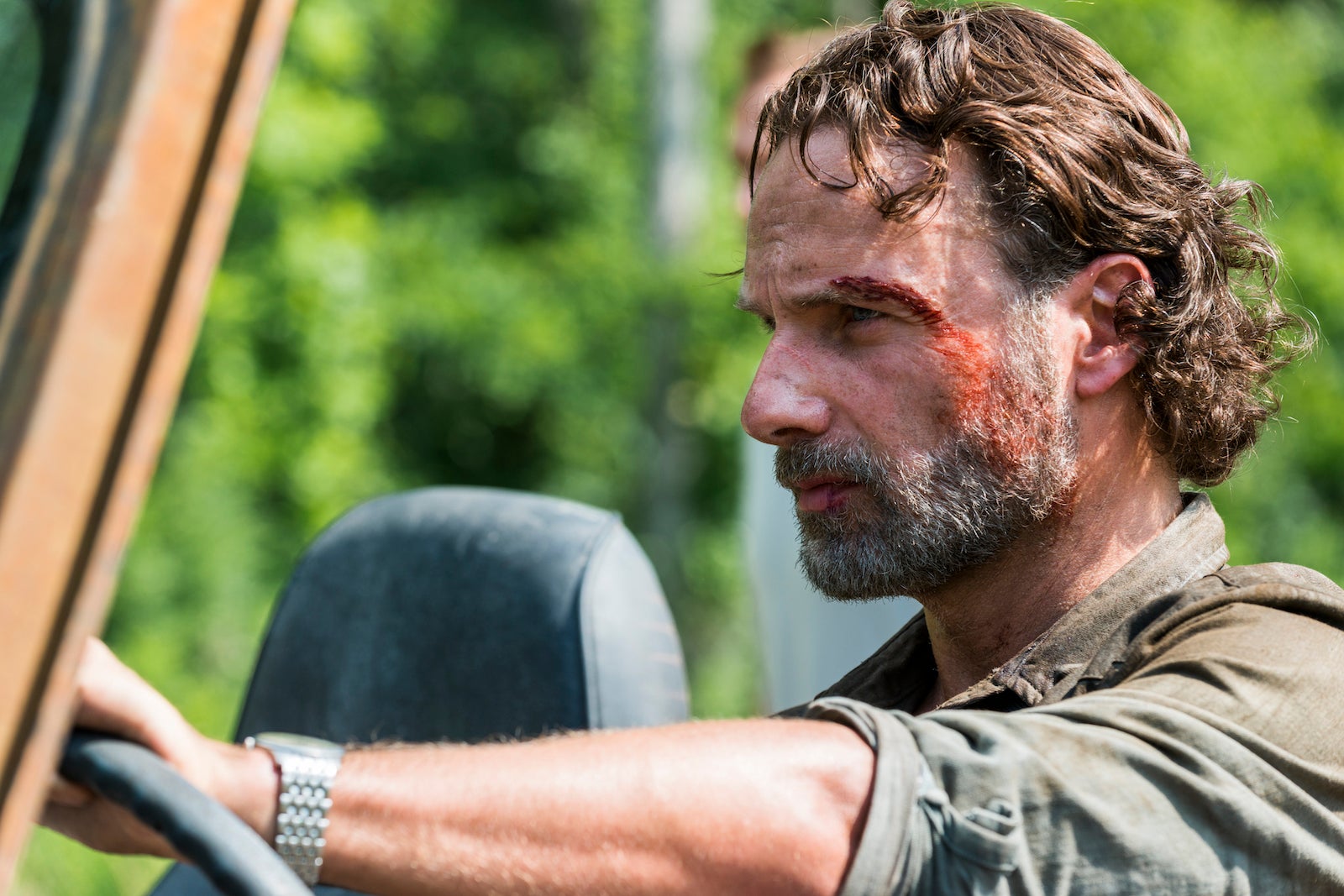 Back to the King: Carol and Jerry are dragging him through the woods, while a despondent, guilt-ridden Ezekiel keeps asking them to leave him behind. Eventually, they come to the answer as to why that zombie they found two weeks ago was so messed up: There’s a small crevice with a creek where someone has literally dumped barrels of toxic waste, and the zombies shambling about in it are all bleached and half-melted and extra gross. As Jerry begs his king to let him push him up the far side of the crevice, Ezekiel finally loses it – both his will to survive and his royal accent. “I ain’t no king,” he cries despairingly. “I ain’t nuthin’… I’m just some guy.”

As the zombies crowd around him yet again, Shiva the tiger bursts upon the scene doing her best Dire Wolf from Game of Thrones impersonation, and treats us to the fourth and final last-second save. Shiva distracts the zombies, first by roaring and killing them, and shortly as a snack; the tiger sacrifices herself so that Carol, Jerry and a now completely despairing Ezekiel can get away. When they return to the Kingdom – literally the only three survivors of the entire force he led out that morning – Ezekiel can’t face his people. He just limps away.

If you couldn’t read between the extremely broad lines of the episode, there’s yet another pre-assault flashback, where Ezekiel talks to Carol essentially about how he went from a meek zookeeper to a king with a tiger for a pet. He went to the zoo, saw Shiva hurt, and then had to decide whether to walk away or jump into a literal tiger’s den to help her out. “If you’re asked to be the hero, be the hero,” he says. It’s basically been his mantra throughout the post-apocalypse, and it led directly to his coronation.

But in the present, Ezekiel has gotten his people killed, been called out on the lie that is his post-apocalyptic life, and lost the one thing that gave credence to his lie, Shiva. The Savior dude added insult to injury with his uncannily accurate deconstruction of the would-be king, but it’s really seeing the corpses of all the people that followed him that makes him feel like a fraud, and someone who absolutely has no business pretending to be a leader of any kind. What Ezekiel doesn’t realise is something made clear by Jerry earlier in the episode. As one point Jerry calls Ezekiel “your majesty”, and Ezekiel snaps, “You don’t need to call me that!” Jerry’s response: “Yes I do.”

I assume The Walking Dead will be giving this revelation to Ezekiel soon enough, but what the king doesn’t recognise is that his performance isn’t just for his benefit. The people of the Kingdom need their king much more than he needs to be king. I’m sure some dimwitted people have bought totally into Ezekiel as having some divine right to rule, but I imagine the majority have consciously agreed to uphold the conceit at the heart of the Kingdom, which is Ezekiel himself – after all, it’s not like he has any royal blood, he just has (had) a damn tiger.

Ezekiel chose to play the part of a leader, but the people who ended up forming the Kingdom wanted – needed – someone to lead them. To them, Ezekiel actually has been a leader, and sometimes leaders can make bad decisions or don’t have enough intel or are wildly hubristic about their chances of defeating a group of hardened arseholes. (Literally everyone in Rick’s group has gone through all of this; remember when Rick didn’t want to be their leader?)

Ezekiel may be ready to abdicate his throne, but I imagine he’s going to discover that even if he’s lost his tiger he hasn’t lost his obligation to his people. When Jerry says he needs to call Ezekiel “your majesty”, he isn’t really talking about how one has to address royalty; he’s talking about how needs Ezekiel to be “your majesty” – to give Jerry and the community a focus point, a sense of identity, and a clear voice when the time comes to act. That is, a leader.

Again, none of this is particularly subtle, and it’s really just a short rehash of stuff Rick and his gang went through many, many seasons ago. But it works, partially because we’re getting to see one of the show’s most interesting new characters put through the ringer, but also because Khary Payton just nails it. He does a phenomenal job as Ezekiel here, capturing his horror, his self-disgust, and his desolation at the end.

With “Some Guy”, we’re halfway through the first hunk of the season, and everything we’ve seen so far has basically taken place over a single day, where Rick and allies have taken the fight to Negan. I assume the Saviors will kicking everyone’s asses mercilessly in the near future, but for now I’m enjoying that our guys seem to be making actual headway in their war. It appears they have basically wiped out two whole compounds, they have the big-arse gun, and they have taken a bunch of prisoners – but these victories have all come at a cost.

Assuming you don’t count all the people and zoo animals who were actually killed, the person who’s paid the greatest cost is Ezekiel, and his extremely Pyrrhic victory may have taken him off the board – and maybe the Kingdom, too. But I wouldn’t count out Ezekiel quite yet. When he decided to play the part his people needed, it wasn’t for a limited engagement. He may think his show is over, but instead it’s just entered a new act. 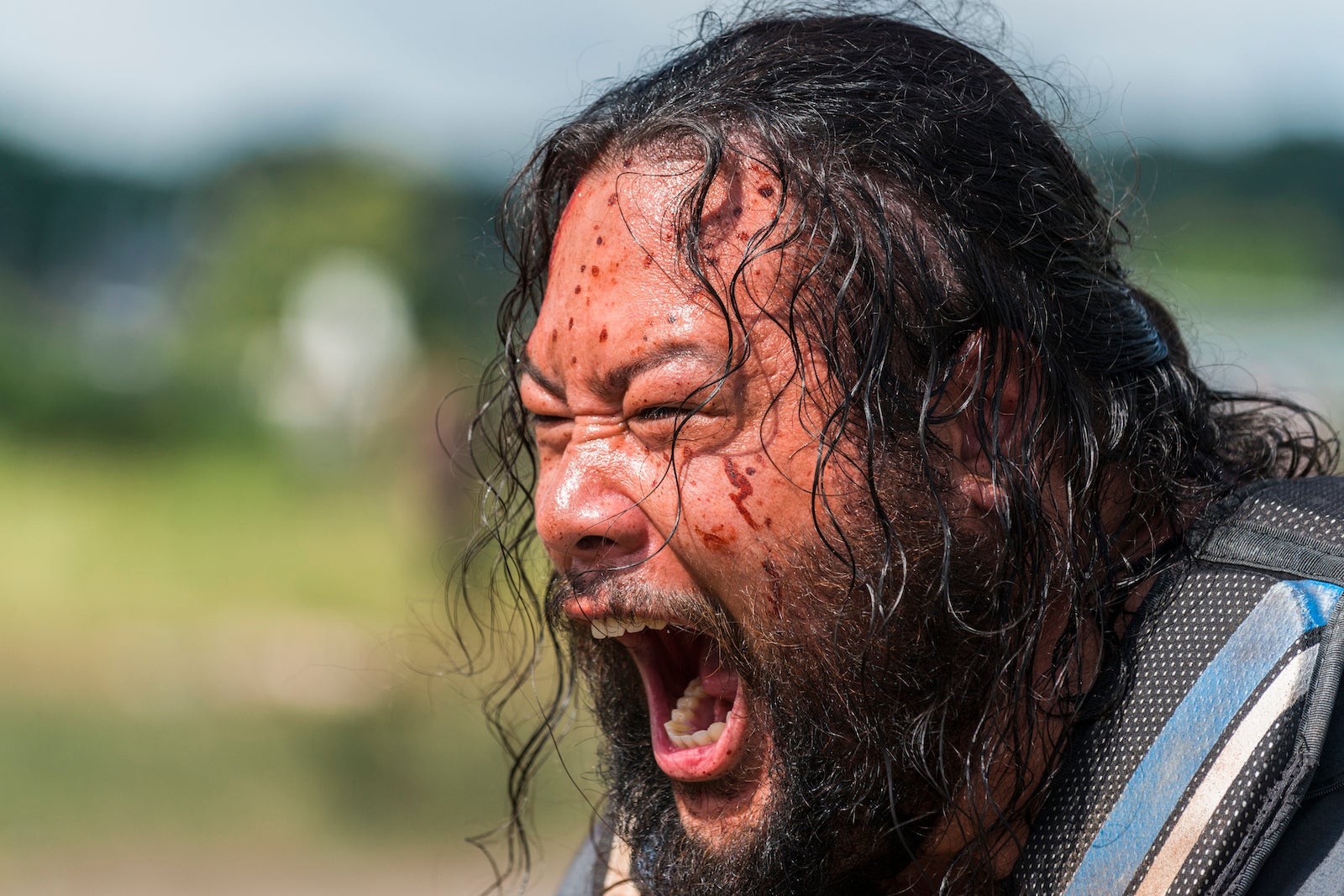