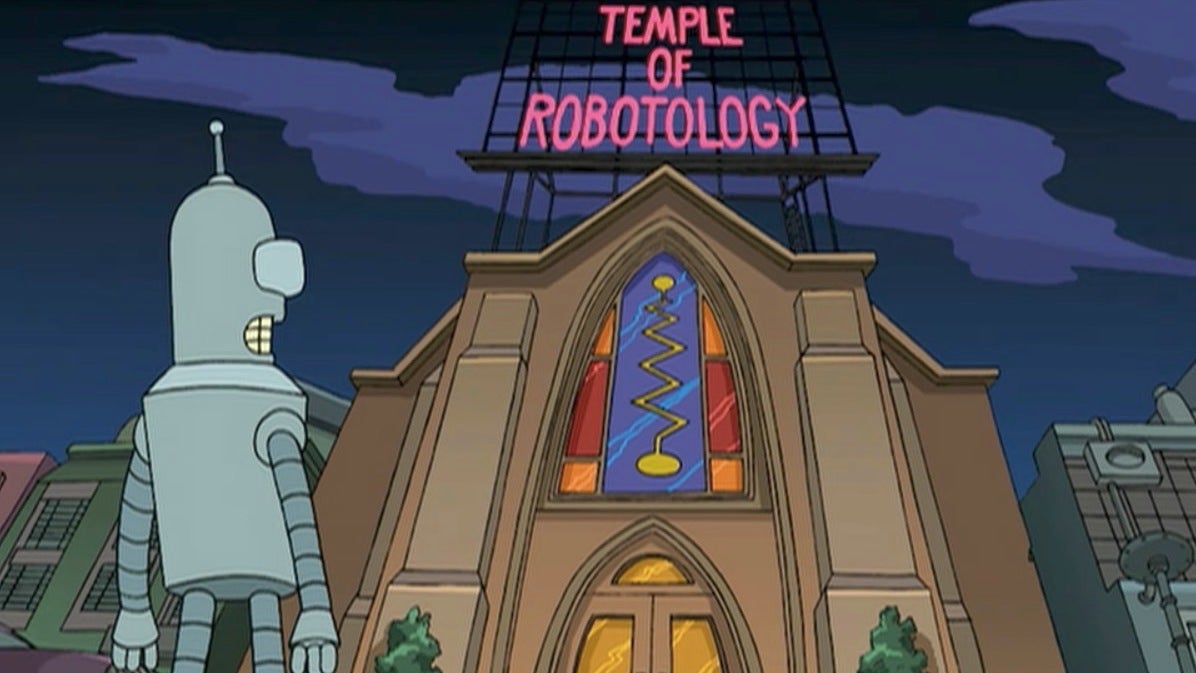 Many scifi and fantasy books explore religious themes: Octavia E. Butler’s Earthseed, Philip K. Dick’s Mercerism, etc. Onscreen, there’s no bigger spirituality movement than Star Wars‘ Force. But there’s more to religion in genre movies and TV than the Jedi… so much more. Have you heard the good news?

Note: I tried to pick more obscure and unusual examples that you might not instantly think of. That’s why this list doesn’t contain, for instance, Game of Thrones (the series’ many faiths got their own extensive recent post) or Star Trek (follow the links to read why humans in Gene Roddenberry’s creation don’t have religion, but Klingons do).

1) “Divine bomb” worship, Beneath the Planet of the Apes


The first sequel to the original Planet of the Apes movie leans heavily into the idea that humans lost control of Earth after a devastating nuclear war. Intelligent chimpanzees and gorillas rule the planet’s surface, but a colony of psychic human mutants still lurks below what used to be New York City’s St. Patrick’s Cathedral. Instead of praying with the Bible, they lavish their attentions on “an unspeakable God” — a powerful nuke that somehow survived the long-ago war. That doesn’t mean they aren’t willing to utilise its original purpose as a doomsday weapon when they decide the time is right; a lot of the movie concerns attempts to thwart the mutant plan to detonate the bomb and rid the galaxy of a planet ruled by damn dirty apes. They eventually succeed, with a little help from a certain time-travelling astronaut… hence the title of the third film in the series: Escape from the Planet of the Apes. 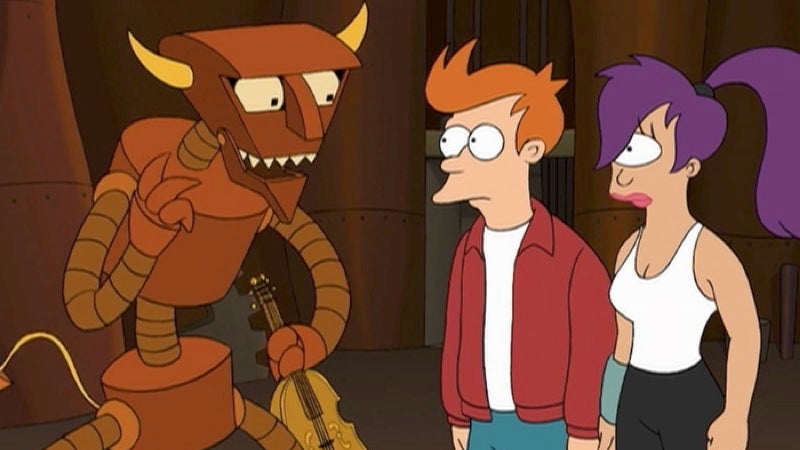 
Futurama referenced a few religions over its run — including the self-explanatory Church of Trek — but Robotology was probably its most involved creation. It was introduced in the season one episode “Hell Is Other Robots,” when Bender sees the light while trying to kick his electricity addiction (much to the dismay of his friends, who realise they prefer him sleazy to virtuous). Robotology tips its hat to both Scientology and Christianity, but with a very specific mechanical slant: The holy text, which suspiciously resembles a floppy disc, is “The Good Book 3.0;” saying grace before meals involves an unbelievably long string of ones and zeroes; and eternal damnation means a trip to Robot Hell, a multi-level prison located beneath the ruins of a New Jersey amusement park and overseen by (who else?) Beelzebot, the jaunty Robot Devil. 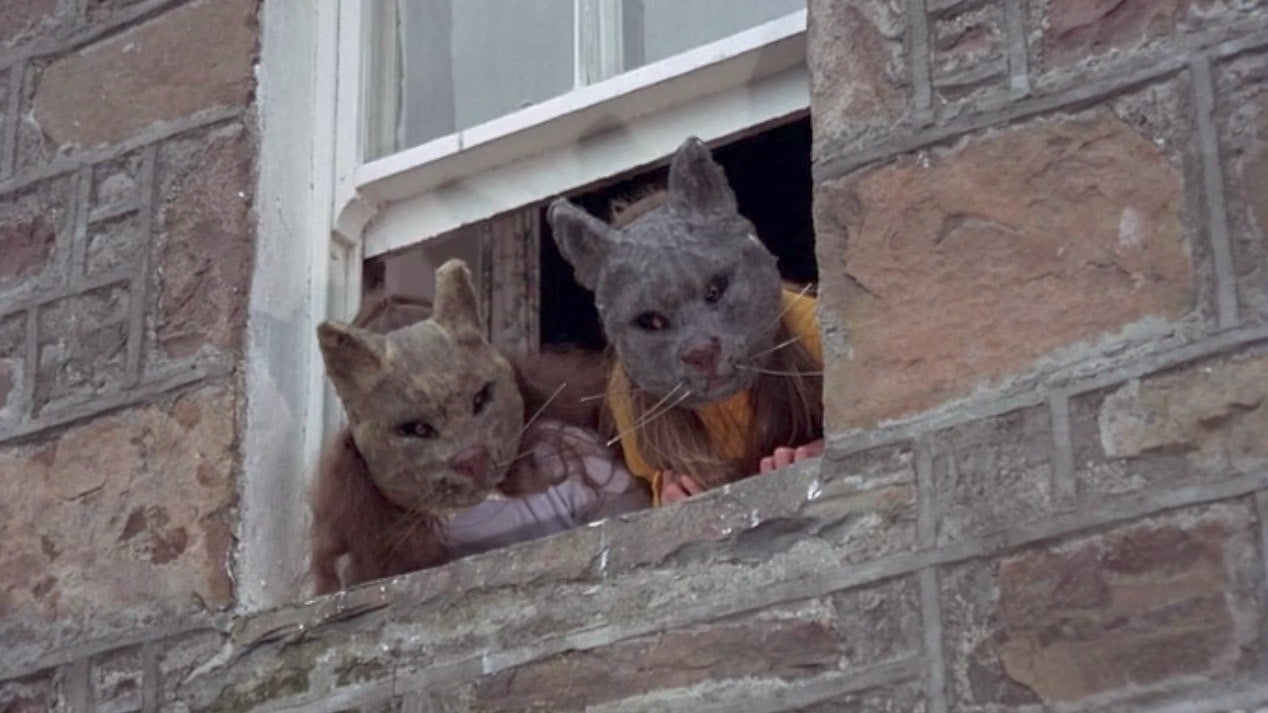 
There’s not really a name given to the faith shared by the residents of Summerisle — but it’s ancient, steeped in pre-Christian beliefs and folklore, and comes complete with an exaggerated take on Celtic paganism. Some elements of it are pretty cool, not the least due to the fact that the island’s de facto leader is a hip aristocrat played by Christopher Lee. The frequently-nude residents are very open about sex and reproduction, which horrifies the prudish policeman visiting from the mainland, played by Edward Woodward (he deems them “heathens”). Their annual harvest celebration is full of music, costumes, and dancing. But if it’s looking like a lean year in the orchards, there’s one more component to the ritual: luring an unsuspecting cop to the island to investigate the disappearance of a local girl, then locking him in the giant, titular wicker man and setting it on fire. You want human sacrifice as part of your pagan shenanigans? Consider a visit to Summerisle.

4) “The Two Great Ones,” Bill and Ted’s Excellent Adventure


Most of this 1989 comedy — about two goofy metalheads (Keanu Reeves, Alex Winter) who’re saved from flunking out of high school by mysterious guardian angel Rufus (George Carlin) and his magical phone booth — involves trips to the past to hand-pick various famous figures for the dudes’ crucial year-end history report. But one sequence sees Bill and Ted emerge into Rufus’ homeworld, a far-future version of Southern California. In this dreamy land filled with sunglasses and silver accessories, they are revered as gods. We don’t know too much about the religion itself, but its influence has created a Utopian paradise, as well as a peculiar style of slow-motion air guitar. And its tenants of peace and harmony are drawn directly from Bill and Ted’s music and philosophy: “Be excellent to each other.” Yeah, Jesus wishes he came up with that. 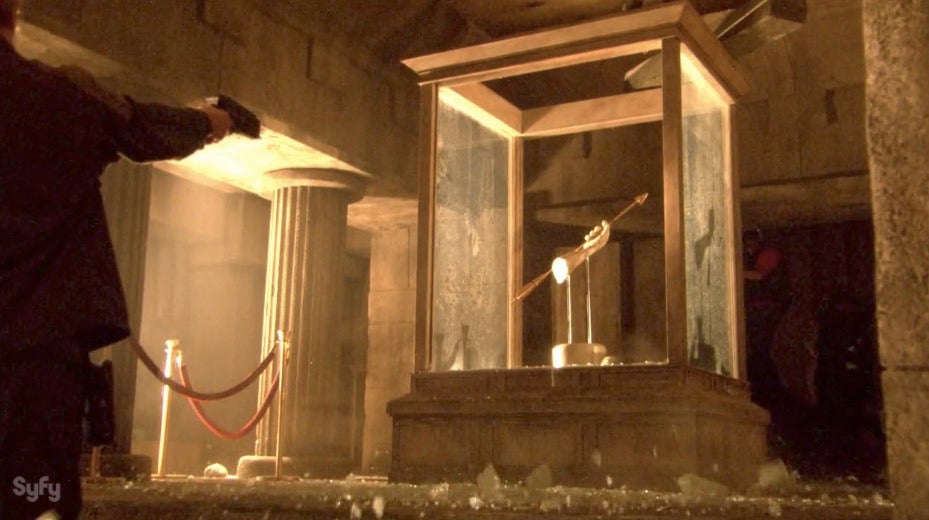 5) The various religions of Battlestar Galactica


Many, many scifi TV shows (Stargate SG-1, Babylon 5, the previously-mentioned Star Trek, etc.) use religion as part of their world-building. Perhaps even more than most, Battlestar Galactica — originally inspired by the Book of Mormon, an influence that carried over to the 2003-2009 version of the series — explored religious themes, and further hammered home the human-Cylon conflict by giving the two groups differing philosophies. The human characters believe in multiple gods; over the course of the series, we learn about the Lords of Kobol, deities whose former empire now exists only in ruins that evoke Greco-Roman mythology. (Starbuck, in the image above, is snatching the Arrow of Apollo — an artifact said to help point the way to Earth — from an abandoned museum on the decimated planet of Caprica.) This also means we get to hear the human characters exclaim things like “Godsdamn!” and “Oh gods!” and “May the gods have mercy on your soul!” Meanwhile, the Cylons worship a solo God who they believe instructed the humans to create the Cylons, so that the Cylons could rise up and destroy them, and ultimately surpass them.

6) “He Who Walks Behind the Rows,” Children of the Corn


Did you think The Wicker Man presented an especially unforgiving belief system? Better hope you never find yourself stranded in rural Nebraska, surrounded by cornfields filled with menacing children. The kids’ form of worship is (literally) bloodthirsty, cobbled together from what appears to be the spookiest parts of the Old Testament and some sort of black-magic version of the Farmers’ Almanac. While the 1984 film, adapted from Stephen King’s story, does eventually reveal “He Who Walks Behind the Rows” as a supernatural entity that requires human sacrifice, most of the cult’s drama revolves around the power struggle between its two pint-sized leaders — the intensely devout Isaac (John Franklin), and the murderously impulsive Malachai (Courtney Gains).


With production on the four Avatar sequels finally underway, there’s no better time to reacquaint yourself with the faith of the Na’vi, the blue-skinned creatures that populate the lush planet of Pandora. Even if you have negative associations with the movie (because it’s corny, problematic, overrated, what have you), the religion — which spirals from a nature goddess named Eywa, who is “made up of all living things” and “protects the balance of life” — is hard to sneer at. Yes, it’s New Age-y (all living things are interconnected, sometimes literally, with a spiritual network that ties into the sacred, ancient Tree of Souls), but it sets up a sharp contrast to the greedy humans that stomp across Pandora, giving no shits about its wondrous environment and ecosystem. Unfortunately for them, unlike on Earth, Pandora’s wild kingdom eventually fights back.

8) Mademoiselle and her followers, Martyrs


This French horror movie does an amazing job of tricking you into believing you’re watching a violent movie about a disturbed, possibly haunted young woman named Lucie who’s hellbent on punishing an apparently normal family that she claims abused her as a child. Then, just when you think you know what to expect, Lucie dies. What seemed to be a secondary character discovers that Lucie was telling the truth, and then Martyrs reveals what’s really going on. We meet a diabolical woman called Mademoiselle who leads a secret group obsessed with finding any shred of evidence of an afterlife. Their technique: gruesomely torturing young women and making them report back any insights gleaned from being on the brink of death. A girl is actually flayed alive, making this maybe the most grim path to enlightenment ever taken.


Main character Paul Atreides, played by Kyle MacLachlan in the 1984 film version of Frank Herbert’s classic tale, is a nobleman gifted with prophetic visions. Over the course of the film, he becomes the long-awaited messiah figure to the Fremen, natives of the spice-producing planet of Arrakis. With all of his powers — in addition to the psychic dreams, he can see into space, control the dreaded local sandworms, and make it rain on a desert planet that’s never seen a drop — he certainly seems well-suited for the job of spiritual warrior.

“The gun is good! The penis is evil! Go forth and kill!” intones Zardoz, the giant head that hovers over a post-apocalyptic landscape, spewing weapons out of its mouth for use by the “Brutal Exterminators” waiting eagerly below. This is the accepted routine until one particularly curious loincloth-clad warrior, Zed (Sean Connery), manages to climb aboard Zardoz and hitch a ride into a zone known as the Vortex. Once he’s inside the charmed realm where the planet’s population of freaky “Eternals” dwell, he learns all is not what it seems — and that his ultimate purpose is to save the world by completely wrecking it. That includes revealing the true meaning behind the stone head (its name is a play on The Wizard of Oz — and its operator is, just like that title character, a false god), although I can’t for the life of me remember if we ever learn how the damn thing flies. Maybe it’s worth worshiping after all.