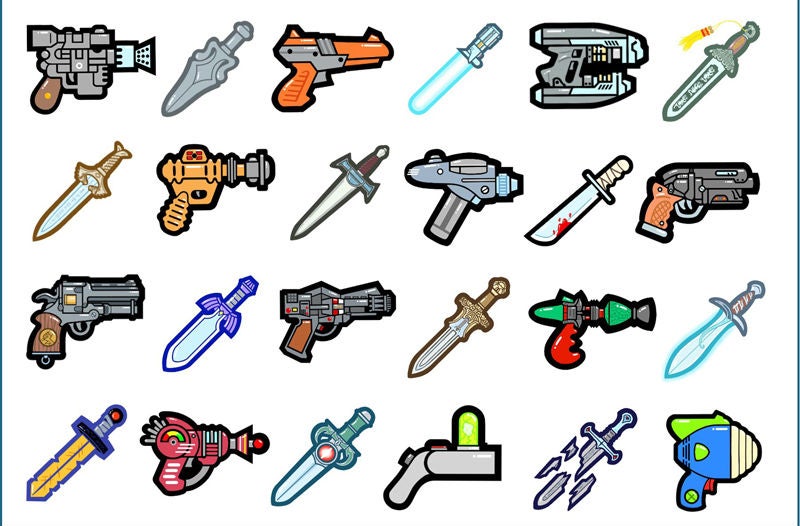 Some of our favourite science fiction and fantasy franchises are defined by the weapons in them. Star Wars has its lightsabers. Zelda‘s Link has his Master Sword. These are the touchstones of each property, and artist Matt Ritchie is reimagining them all in a beautiful, colourful new way.

The show is called “Knife to a Gun Fight” and it features one-of-a-kind reproductions of some of the most iconic guns and other weapons in pop culture history. It opens October 13 at Gallery 1988 in Los Angeles, CA and remains on display through October 28.

“I see these weapons as almost symbols of the characters themselves,” Ritchie told me via email. So can you guess them all? First are some swords.

And now some guns.

Ritchie, who lives in the Bay Area and has been an artist for 20 years, hand painted and carved each of the original pieces in the show. But they didn’t start that way. “I designed the weapons on my iPad Pro in the most crispy stripped down and static style possible,” he explained. “[They were] almost emoji-like in design. Then I purposely tried to emulate that look on cut wood with paint. I wanted the pieces to look like they were taken straight off the iPad screen and to showcase the distinctive design elements of these iconic weapons.”

What he found was that even after stripping each weapon down to its bare necessities, its essence still remained.

“It is also interesting to me that my redesigned and deconstructed rendering of these objects still embodies the personality and identity of the character and object,” Ritchie said. “Personally, I’m not a violent person and do not own any real weapons but I do realise the historical opposition of these items in the entertainment industry. I think that this show will have some people wrestling with the irony and hypocrisy of weapons in entertainment versus real life.”

That. And it will also have people admiring how badass they are.

For more on the show, visit gallery1988.com.