Star Trek: Discovery’s Biggest Problem Is That It’s A Prequel 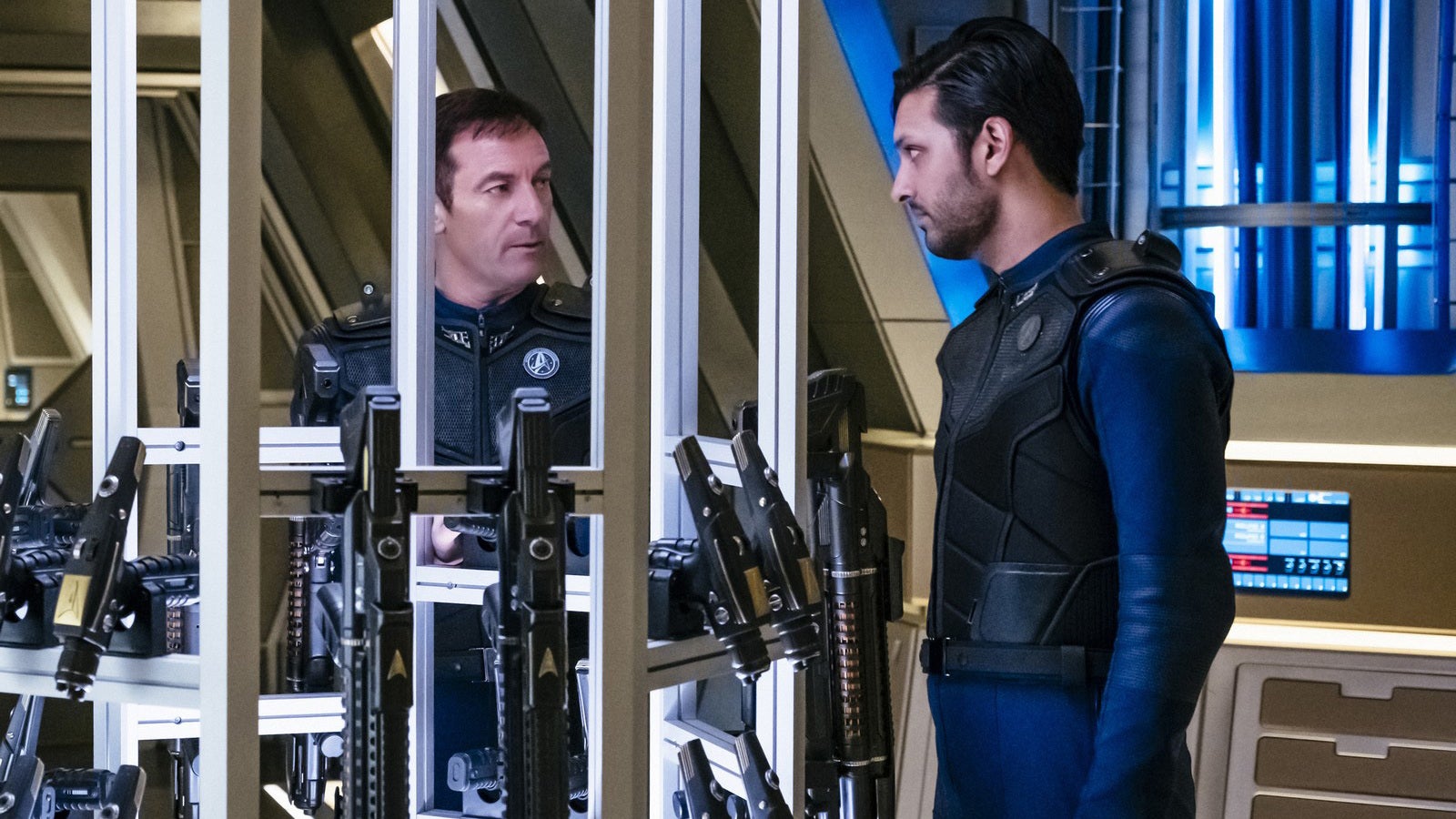 “Lethe” was a character episode. It was fine. Well, it wasn’t. Every plot beat was fairly predictable and the emotional resonance got about halfway there at best. At least I didn’t loathe it. I just found it tedious. And instead of thinking about Sarek and Burnham’s past and Lorca’s future, I kept wondering why this show even exists as a prequel.

This week’s plot was bifurcated (as is so often the case with Discovery): on one side was Burnham’s attempt to find Sarek through their special soul connection. On the other was Admiral Cornwell — the friend of Lorca’s from last week — and her attempt to find out how Lorca’s doing.

The first plot had Sarek on his way to peace talks with the Klingons, only to suffer catastrophic injuries and ship damage courtesy of a Vulcan suicide bomber who hates Sarek for… thinking humans can be on the same level as Vulcans. They’re extremists. Logical ones, I guess.

The same strain of extremists are the ones who bombed Burnham’s school in that flashback we saw a few weeks ago, where Burnham died for three minutes and Sarek used the mind meld to bring her back to life. The show literally calls it a soul graft and Burnham says it’s “frowned upon.” The Vulcan mind meld: it slices, it dices, it makes julienne fries!

Burnham uses her special bit of Sarek’s katra to go into his mind, trying to find him. She finds him reliving, over and over, the memory of the day she graduated the Vulcan Science Academy. There, we find that Burnham was seeking a place on the Vulcan Expeditionary Force, but Sarek delivers the news that she was denied. According to Burnham, this was devastating as she felt she failed Sarek. I say “according to” because her saying it is the only way we know this.

Holy shit, I forgot that it’s not just that Vulcan blood is green, but it’s basically neon.

Of course, in a “twist” that isn’t one at all, it’s revealed that Sarek was given the option of whether Spock or Burnham would get a place on the Expeditionary Force, as the Vulcan in charge says that two “non-Vulcans” would be too much for Vulcans to handle. Sarek plans to send Burnham to Starfleet, which he explicitly says has less rigorous demands, and to let Spock have the Expeditionary Force slot. Of course, as we all know, Spock spurns that place in favour of Starfleet, so Sarek fucked up Burnham’s life for no reason. Anyway, Burnham still manages to get him up to tell them where he is so they can save him.

Meanwhile, Admiral Katrina Cornwell pops by — and is apparently a psychologist by trade — to see how Lorca’s doing. His promotion and trust of a mutineer are seen as… less than optimal given that the Discovery is the secret weapon of the war effort. Lorca distracts Cornwell with alcohol and sex which, to be honest, is entirely understandable. He’s got the seduction bit down.

Of course, when they’re post-coital, he wakes up in a panic drawing a phaser out from under his pillow and pinning Cornwell down. (Always the sign of a stable mind.) He begs her not to take his ship away, as it’s all he has. She rightfully points out that there’s no way to tell if he’s telling the truth or being manipulative again.

Pictured: A man who is just fine.

Sarek is too injured to go to meet the Klingons, and Lorca says they should send Cornwell. It is impossible to tell if he truly believes this in the best interests of the Federation or if he wants to delay her stripping him of command. Or, even worse, if he suspects that the Klingons will take care of her for him. Which they do, of course, and Lorca follows protocol for the first time in his life and tells Saru they will wait for Starfleet Command to tell them whether or not to rescue Cornwell. Love monstrous Lorca, who no longer presents a reasonable counterbalance to science and discovery and is just downright evil.

Oh, and Sarek claims he remembers nothing that happened in his mind with Burnham and also says they are technically not related. Will the character assassination here never end?

This was a weak episode in that it was predictable and that the emotional bits with Burnham were made less effective by the facts that a) a lot of them were cluttered by the special effects of her and Sarek sparring in his mind and b) because of how Burnham is written, she shows no actual emotion and has to expend pages of dialogue explaining emotions. This is of course part and parcel of being a Vulcan, and yet the best Vulcan characters still managed to imply emotion without just saying them.

I was ambivalent to this episode after the fury induced by last week’s. It’s a mess certainly, but like a low-level clutter with many nests for rats and roaches to live in, rather than a flaming 12-car pile-up. Mostly I just kept wondering what the value in making this show a prequel was. What is point here? 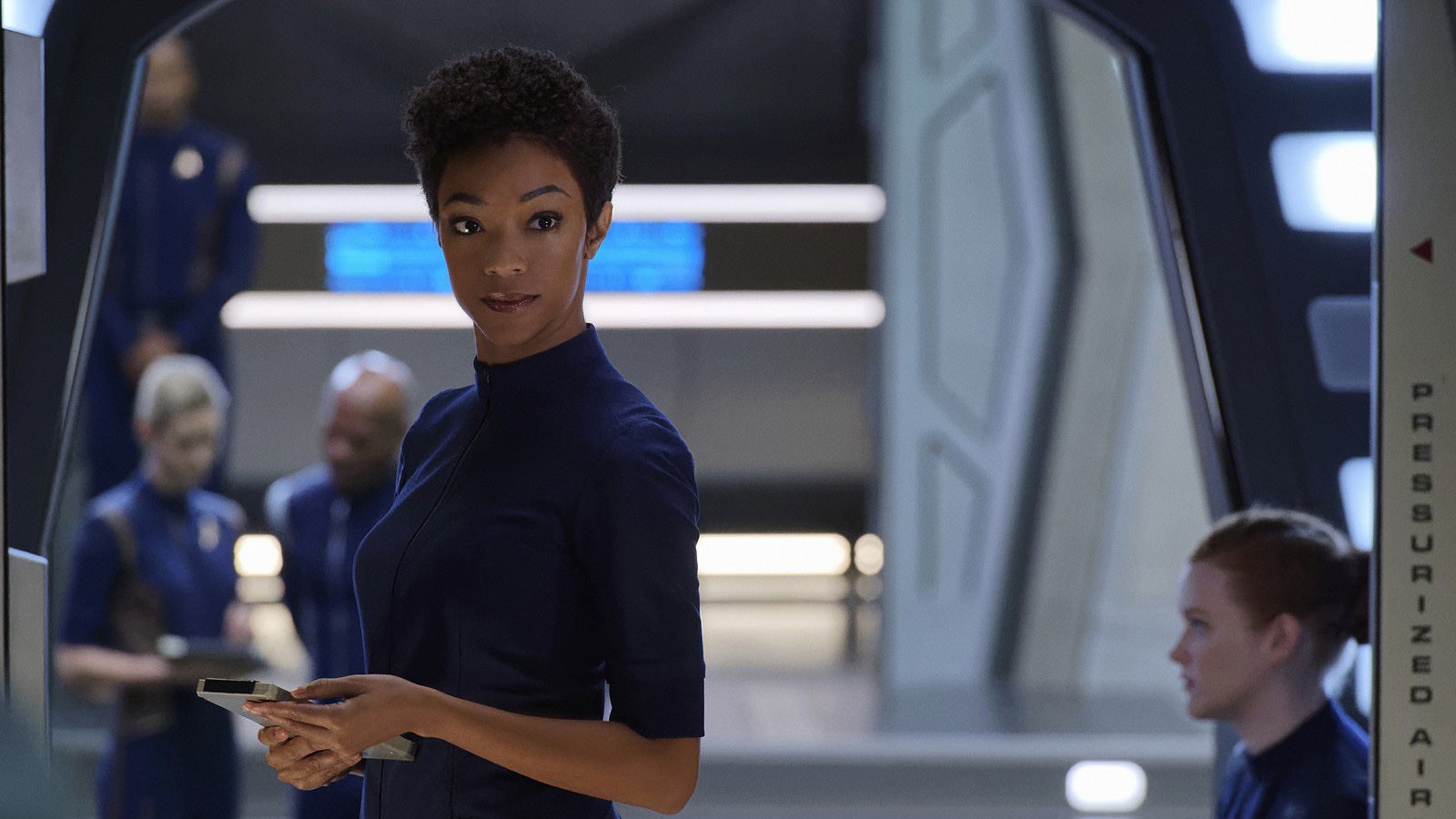 One constant problem of this show is that it’s set only 10 years before The Original Series. We saw last week that Christopher Pike’s already a decorated captain, probably already on the Enterprise with Spock as his science officer. So the argument that this is “the road” to that future holds little water. And, as with most prequels, the matching of technologies, uniforms, continuity, etc. is a daunting challenge. The way this show presents Klingons are a nightmare in this respect and many others.

There’s a low-level hum of annoyance in how many continuity snarls this whole show keeps throwing up. Sarek wasn’t a great dad to Spock, but the way he treats Burnham is just confusing. Discovery also managed not to learn from Supergirl, another CBS show, at least in the beginning. They found out that mentioning an iconic character with a familial relationship to the main character and never showing him is annoying. Supergirl eventually caved and added Superman into its show, although that didn’t happen until the show was off CBS. Similarly, episodes like “Lethe” make the absence of Spock in Burnham’s memories glaring.

And then you have to wonder why has Discovery made this choice at all. Why give Spock a foster sister he’s never mentioned? Why add all this weird baggage to Sarek and Amanda? Why didn’t Sarek try to rationalize what he did with logic, which is pretty much his default character? This is a dude who, when asked why he married a human said, “At the time, it seemed the logical thing to do.” Where is his defence of what he did to Burnham? Why the cop out where he denies remembering what happened?

Why not just pick a different Vulcan? One whose beliefs and characterization we don’t know that well? Why not set this show a hundred years after Voyager, and let differences in continuity can be explained as changes that took place in between those shows?

Why not have this be in the future of Trek, where Spock’s work with the Romulans has triggered a crisis on Vulcan over their relationship to other species? You can have extremists and you can have a protege of Sarek’s foster a human child and no one will ask why we’ve never heard about these things in the other shows. (Also, Burnham wears an IDIC pin throughout the flashbacks and yet at no point does anyone point out that the Vulcan extremists are definitely in contradiction with the fundamental Vulcan tenet of Infinite Diversity in Infinite Combinations. AWESOME.)

Set it in the future, and have the war be with a species we don’t know. One where we’re not constantly wondering about forehead ridges. Or one where it doesn’t feel like backsliding — and backsliding to ’60s racist caricatures — to present them like torturers, betrayers, and cannibals. Why not do something new? Set it in the future, where we don’t spend all our time wondering what the hell happened to all this amazing technology. What is the benefit of this particular show being a prequel?

The craven, marketing answer is that Spock and the original series are icons, and the name recognition would draw people in. Of course, as we’ve said, we don’t see Spock. And nothing in the design of this show mimics the original series at all — despite Bryan Fuller’s apparent original plan to include the primary colours of the original, famous uniforms. So, again, why?

I don’t hate this show. It’s not bad, it’s just that the good parts have nothing to do with it being a prequel while all the frustrating parts do. The only thing I’ve found that justifies it is that Enterprise had about as much contempt for Vulcans as this show apparently does.

But the tug of war between science and war? That could be done in any era. The question of whether a captain is acting out of trauma or because he’s always just been a bit of a sociopath? Also could happen at any time. Science that is basically magic, snarky scientists, a cadet trying to forge her way to the command track, a first officer figuring out how to be a good captain within his particular strengths, a mutineer on a redemption path — all of these are good Trek bits and none of them require a prequel.

Pictured: A man who is even more fine and not at all going to phaser his own arse off

Lorca’s bit this week worked better — better but still, he’s a nightmare of a person — than Burnham’s because I didn’t have a running commentary in my head about things like when Spock entered Starfleet, what canon had already said about Sarek’s feelings with regard to Starfleet, what it had said about mind melds, and so on. The constant issues of character and continuity means it didn’t hit like should have. Lorca’s storyline, on the other hand, could have taken place whenever. It felt more natural, and not like the writers were jamming the wrong puzzle pieces into a picture of Sarek from The Original Series.

I want to just enjoy this show. There is no Star Trek I haven’t derived joy from solely by its existence. And I liked way more than I disliked in first episodes of this season. Even last week’s episode I was enjoying right up until Lorca slapped red shirt on my good will and fed it to a salt vampire. And the preview of next week — with the good old time-loop trope in effect — made me excited.

But this show is drowning in its own larger story. They called one episode “Context Is for Kings” and then proved themselves to all be peasants. Context is the biggest failure here. I do not like nitpicking canon. But this show invites it, and that’s its biggest mistake.