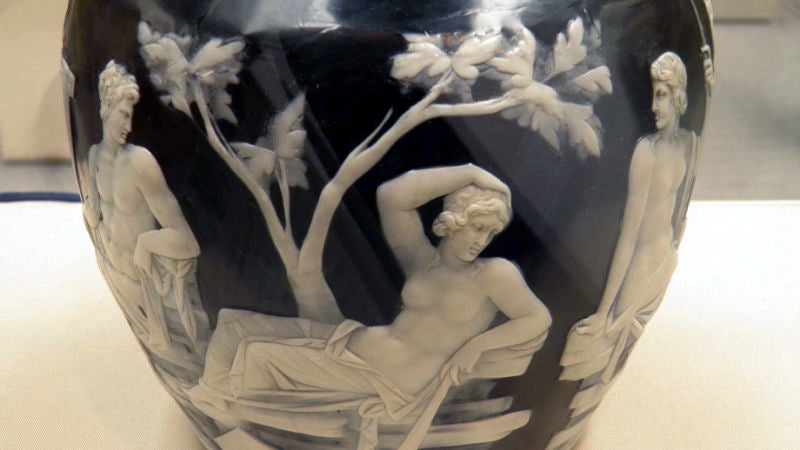 New research shows that the British Museum’s most famous artifact – the Portland Vase – was manufactured by a different technique than the one traditionally assumed by historians and archaeologists.

For centuries, experts in antiquities have said that the Portland Vase, along with other Roman cameo glass artifacts, were manufactured by the ancient Romans using a blown glass technique. Australian National University scientist and expert glassmaker Richard Whiteley is now challenging this longheld assumption, arguing that many cameo glass pieces were built with a cold-processing technique now known as “pate de verre.”

“It’s not about proving people wrong, it’s about correcting the historical record and reviving and restoring a technique lost for over 2,000 years.”

For those who are into this stuff, that’s a bit of a shock. Roman cameo glass from this era, in addition to being extremely rare (only 15 other Roman cameo glass vases and plaques are known to exist), has been hugely influential. The Portland Vase (crafted sometime between 30 BC to 50 AD) is probably the best known piece of Roman cameo glass, inspiring many glass artisans and manufacturers from the early 18th century to the present day. These ornate glass pieces included vases, large wall plaques, and small jewellery items. Historians and archaeologists suspected that the cameo glass was made by a process requiring blown glass, but Whiteley says he’s uncovered evidence showing this isn’t the case.

“It’s not about proving people wrong,” said Whiteley in a statement. “It’s about correcting the historical record and reviving and restoring a technique lost for over 2,000 years.” 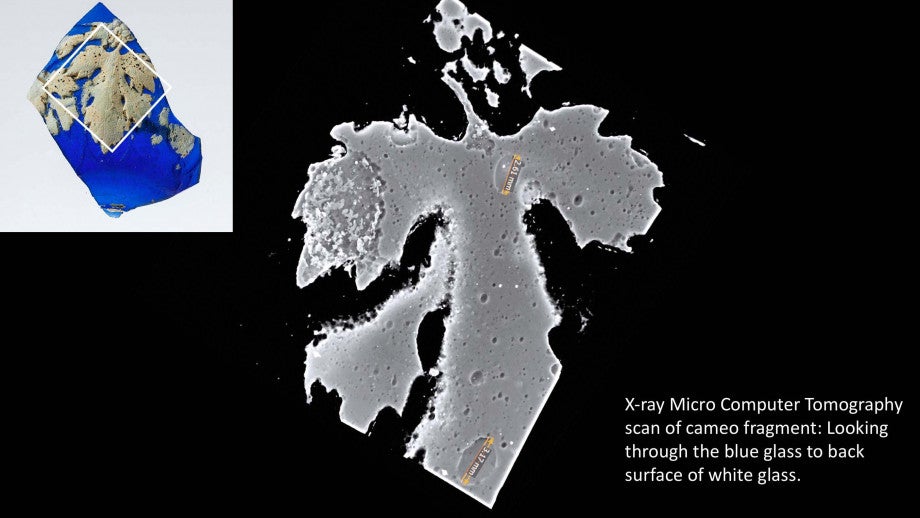 He came to this conclusion after examining some Roman cameo glass from the ANU Classics department with a computed tomography scanner. This allowed him to see, for the first time, the shape, direction, and composition of air bubbles trapped between the blue and white layers of Roman glass.

“I remember the moment I saw it, I said: Oh my god, this is extraordinary, because I also saw cold working marks in the surface which were inconsistent with the assumption that it was blown,” Whiteley said. “I carve and shape glass with my hands, and have done for decades. The marks I saw were inconsistent with what I see in my work.”

Specifically, Whiteley’s team saw a bubble configuration with the glass that’s produced by a pressing and turning motion. He theorizes that cold granulated glass was packed into a mould, and then a blob of molten blue glass was introduced and pressed against the mould, heating the white granules from behind.

“You just would not get a bubble that size and flat-shaped from blowing,” he said. “The most striking thing about it, is not its size and its flatness, but we found a section where the blue glass has mixed with the granulated white specks of glass.”

Whiteley admits he’s not the first person to make this claim. Back in the 1990s, German artist Rosemarie Lierke reached a similar conclusion, but her writings weren’t accepted on account of lack of evidence. Whiteley will present his new evidence at a historical glassworks conference at the British Museum next week, and his supporting paper has yet to appear in a peer-review journal. Until then, we’ll have to temper our expectations about this finding.

Whiteley hopes his new theory will attract enough attention and funding for a research team to recreate the Portland Vase using the pate de verre method. In his opinion, that would settle the debate once and for all.

We reached out to several experts to get their opinions on this research, and will update this post should we hear back.