Apparently Boba Fett Is Around For Everything, All The Time 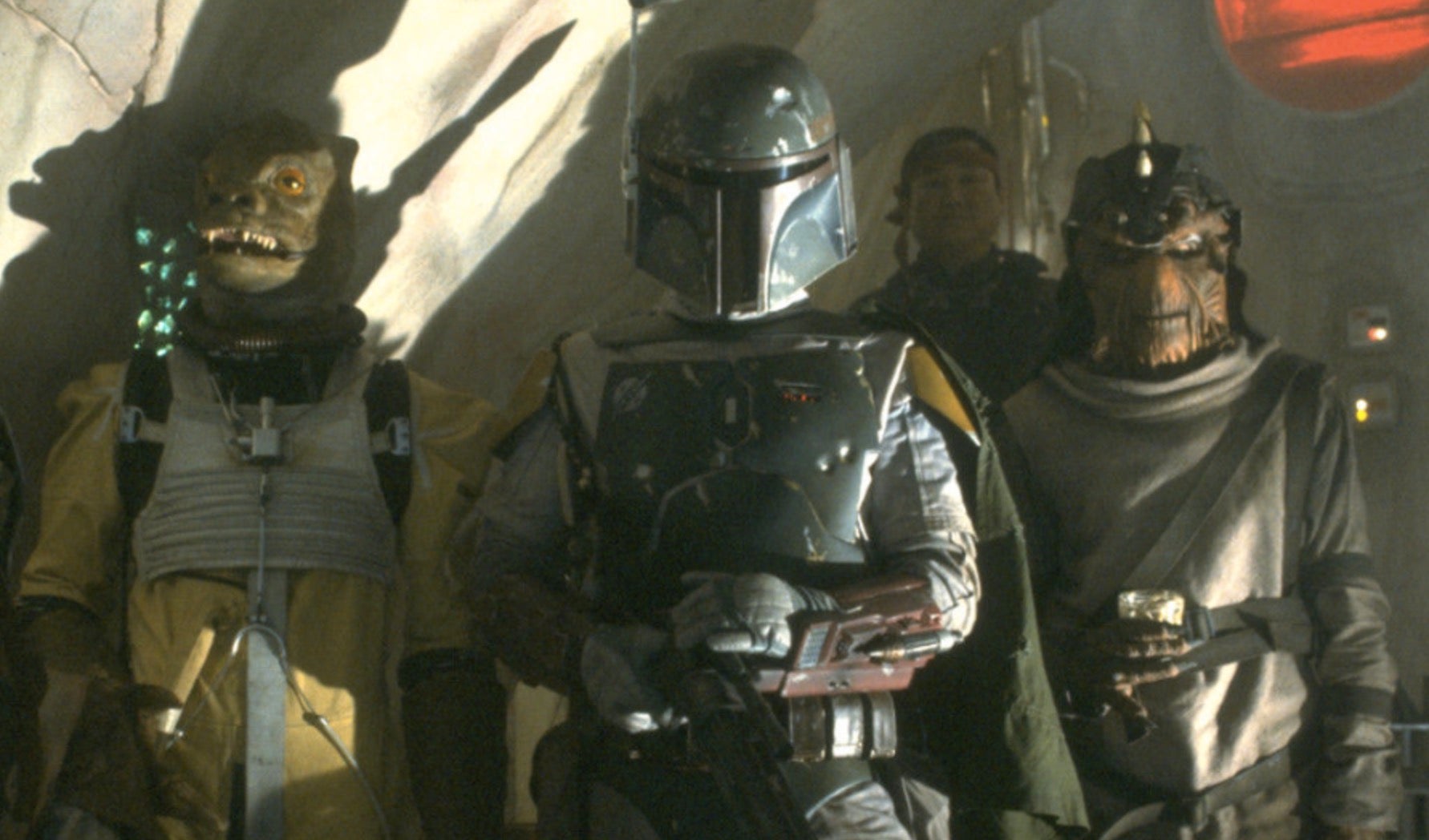 Everyone loves Boba Fett. He's the coolest-looking bounty hunter in the galaxy. Paramount among his fans, however, seems to be Star Wars creators who continually put the bounty hunter on the periphery of seemingly ever major Star Wars story there is.

We already knew that Boba Fett was going to get a new story in the upcoming Star Wars anthology From a Certain Point of View. The story is called "Added Muscle" by Paul Dini and, in the audio book version, Fett is voiced by Jon Hamm.

The first excerpt of this story has been revealed and once again, just like in Attack of the Clones, the Special Editions and the comics, Fett was right there on the outside of some of the biggest events in the Star Wars mythology.

"Added Muscle" adds context to Boba Fett's brief appearance in the Special Editions of Star Wars: A New Hope. In the 1997 re-release, he's in docking bay 94, with Jabba the Hutt, as Hutt meets Han Solo. How did he get there? What was he doing there? The story shines some light on that day, which also happens to be the day Luke Skywalker and Obi-Wan Kenobi met Han Solo and Chewbacca.

"Boba is stopping over on Tatooine when he's called on by his old associate Jabba the Hutt to help collect a debt," Dini told USA Today. "Naturally this is the money owed to Jabba by Han Solo. The story is a monologue going through Fett's head while he backs up Jabba and stares down Han and Chewie." Here's a brief excerpt:

Followed those treads a way until I found someone had wiped out the Jawas, too. "Someone" meaning amateurs trying to fake a Tusken raid. Probably stormtroopers, judging by the random blast shots. Some might call them precise. Me, I say they can't hit the butt end of a bantha. At least they had brains enough to take out ev­eryone who had seen the droids. Hard luck on the sizzled hicks I found at that torched moisture farm. Had a look-see and discovered there were three settlers living there, not two. Betting the third ran with the droids. I'll hunt around after I'm done here. Vader may triple the bounty if I bring him the fugitive along with the droids. Yeah, I know, intact corpse, "no disintegrations".

Read more at this link or listen below.

I love the idea of Dini's story, but it's another example of the Star Wars universe getting smaller. Boba Fett is the primary example of this. He was first introduced in the films in The Empire Strikes Back, only to "die" in Return of the Jedi. But Lucas put him in the Special Editions, and then made him a major character in Attack of the Clones. It turned out Fett is a clone just like the Republic's Clone Army, but raised by a bounty hunter named Jango Fett.

Jango Fett was then killed in front of Boba and later, in The Clone Wars TV series, audiences saw the character in a ton of stories, which helped to establish how he became such an infamous bounty hunter.

Most recently, the Marvel comic books revealed some more crucial Fett information. Not only was he hired by Darth Vader to track down the person who blew up the Death Star, he confronted this person (Luke Skywalker, obviously) in Obi-Wan Kenobi's hut and ends up being the person who reveals to Darth Vader that the person's name is "Skywalker". Which is a huge moment. Boba Fett is basically the one who lets Darth Vader know his kids are alive.

And now, with this story, we know that Boba Fett was considering tracking Luke down earlier and had a part to play before all that. Which just seems crazy. We know he's a cool character, but the Star Wars universe is a big one. For one bounty hunter to always be right there seems needlessly coincidental.

And don't forget, there's probably a Boba Fett movie in development too, or was in the past. So if you love Boba Fett, you're certainly going to keep learning more and more about him. And then more. And then maybe some more.