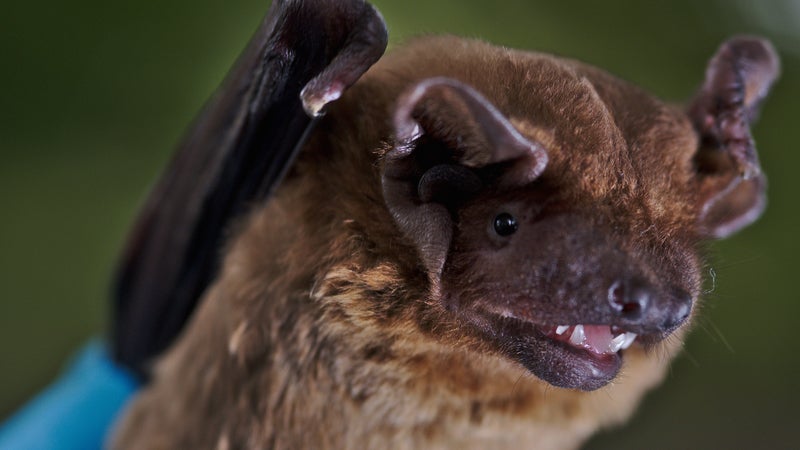 New research shows that migrating bats have an uncanny ability to assess weather conditions such as wind speed, wind direction and air pressure, abilities which could help them to choose the optimal time to set off on long journeys.

The migratory common noctule, a species of bat common throughout Europe, Asia, and North Africa, can anticipate optimal weather conditions, according to new research published in Biology Letters. Like birds, these bats can sense when the time is right to embark on their migratory journeys, helping them avoid bad weather and take advantage of favourable conditions. The insights gleaned from this study could alert conservationists to the timing of these migratory events, as large numbers of bats are killed each year by collisions with wind turbines.

There are over 1300 bat species, but very few travel long distances. In Germany, migratory common noctules (mostly females) travel several hundred miles to reach their destination, but very little is known about the factors that influence the timing of these journeys. In the spring, these bats awake from their hibernation and head northwest toward their summer territories where insects are plentiful. Once there, females give birth and raise their young. When autumn arrives, the bats reverse their journey and head to their winter territories where they mate and prepare for hibernation.

The spring migration is especially critical, a time when females are close to giving birth, and when tough weather conditions can put a quick end to a hopeful migration. Female bats need to build up sufficient fat reserves, and owing to the advanced stage of their pregnancy, they need to get the timing just right. To find out how common noctules know when to head north, Dina Dechmann and Teague O'Mara from the Max Planck Institute for Ornithology in Radolfzell studied the migration patterns of these bats across three seasons in 2012, 2013 and 2016. The researchers caught around 30 bats each year near the vicinity of their hibernation sites, measuring and weighing them, and fitting them with radio transmitters. After releasing them back into the wild, the researchers flew over their territory each morning in an aircraft to see which bats had set off, and in which direction. At the same time, Dechmann and Teague collected weather data, such as wind speed and direction, air temperature, air pressure, relative humidity, and cloud cover.

Looking at the data, the researchers realised that weight was not a significant factor for take off. Which makes sense; unlike birds, bats can pack on the ounces relatively easily and quickly. Instead, the bats were waiting for a particular set of nighttime weather conditions that were favourable to flight.

Specifically, the bats were flying at times of higher air pressure (a sign of sustained good weather) and tailwinds (flying into the wind sucks). In the event of a weak headwind in the direction of travel, some bats would depart during nights with low atmospheric pressure.

Importantly, the bats assessed these conditions differently across the migration season.

"Early on in the migration season, having really strong tail winds is important," explained O'Mara in a statement. "Later on, it is important to have nights with high pressure and clear nights regardless of the wind conditions. They only migrate on nights with low pressure and bad weather, if there are favourable tailwinds and weak head winds."

The study suggests that there's no single best set of conditions for females when deciding to leave. "Future work should target the social or physiological sources of the variation in this flexibility to resolve the many iterations in migratory strategies found in birds and bats," conclude the researchers in their study.

A very cool benefit of this study is that it allowed Dechmann and O'Mara to build a model that predicts the ideal times for bat migration. Hopefully, this model could one day be used to assist with bat conservation efforts. Many bats are killed by wind turbines in Germany, so a predictive system like this could let operators know when to shut down their turbines.

Which would be great, because bats are cool and they eat all the bugs.