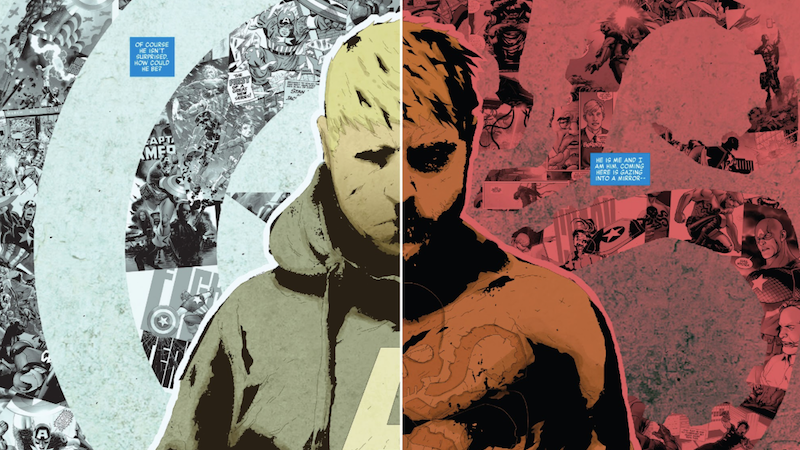 One of the major things that set Secret Empire apart (though not in an altogether good way) from other major comic book events was how incredibly slow of a burn it was in terms of plot development.

Though Secret Empire didn't officially start as a series until this past April, some of the earliest seeds of the event's larger plot were planted all the way back in Marvel NOW! Point One, the collection of one-shots from 2015 that first introduced Kobik, a being made of merged cosmic cube fragments. In time, Kobik would come under the Red Skull's influence and be responsible for rewriting Steve Rogers' personal history and turning him into a sleeper agent.

For the better part of the past year, as Secret Empire has slowly unfolded, we've watched Steve Rogers reveal a new side of his personality that was antithetical to everything we knew about Captain America. As Secret Empire's central villain, Steve became the type of leader who appealed to the public's populist beliefs in order to justify the human rights atrocities (like rounding up and murdering Inhumans) he was willing to commit in pursuit of his vision.

Steve became a super villain and the rest of Marvel's heroes rallied and fought the good fight in the name of justice. Unsurprisingly, Steve and Hydra lost in the end, and readers were left with a fairly straightforward story about how fascist organisations with clear parallels to Nazis are not good. A truly novel idea.

Though Marvel executive editor Tom Brevoort insisted that Secret Empire wouldn't end with Kobik simply undoing everything, that's exactly what happened when she "resurrected" the "good" Steve just in time for him to fight his Hydra-self. All of the collateral damage (like Black Widow's death, that's teased to have been a fake-out) remains in place, yes, but nearly all of the other murdered heroes came back, and Steve is given a chance to symbolically absolve himself of his own actions by fighting his evil twin.

The Steves physically fighting one another further illustrates some of the point that Secret Empire was trying to make: true evil can come from within, heroes can become villains, and standing up against tyranny is a necessary part of survival. 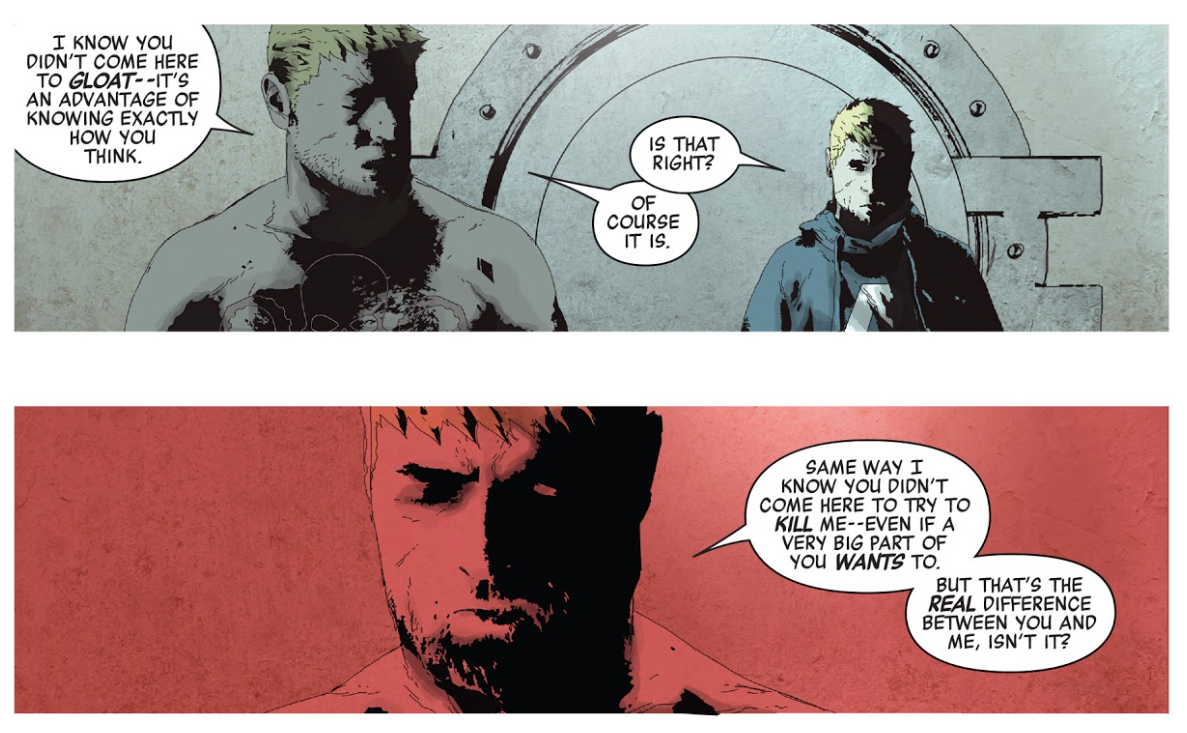 What Secret Empire #10 didn't exactly make clear after the Battle of the Steves was whether Hydra Steve was good and done. Instead, we saw that Marvel's heroes were all too ready to immediately accept the newly-created good Steve, as if he were entirely divorced from the man who had spent the past few months trying to kill them.

The revelation that Hydra Steve is alive and well doesn't come as a surprise, but seeing how he interacts with the good Steve does manage to cast Secret Empire's closing act in a different light. Hydra Steve listens as good Steve describes how an injured child ran in fear from him despite the fact that he was trying to help. While the Avengers might have been ready to accept Steve back into their ranks, the public is still very much living in fear of the ideas that Captain America came to symbolise. 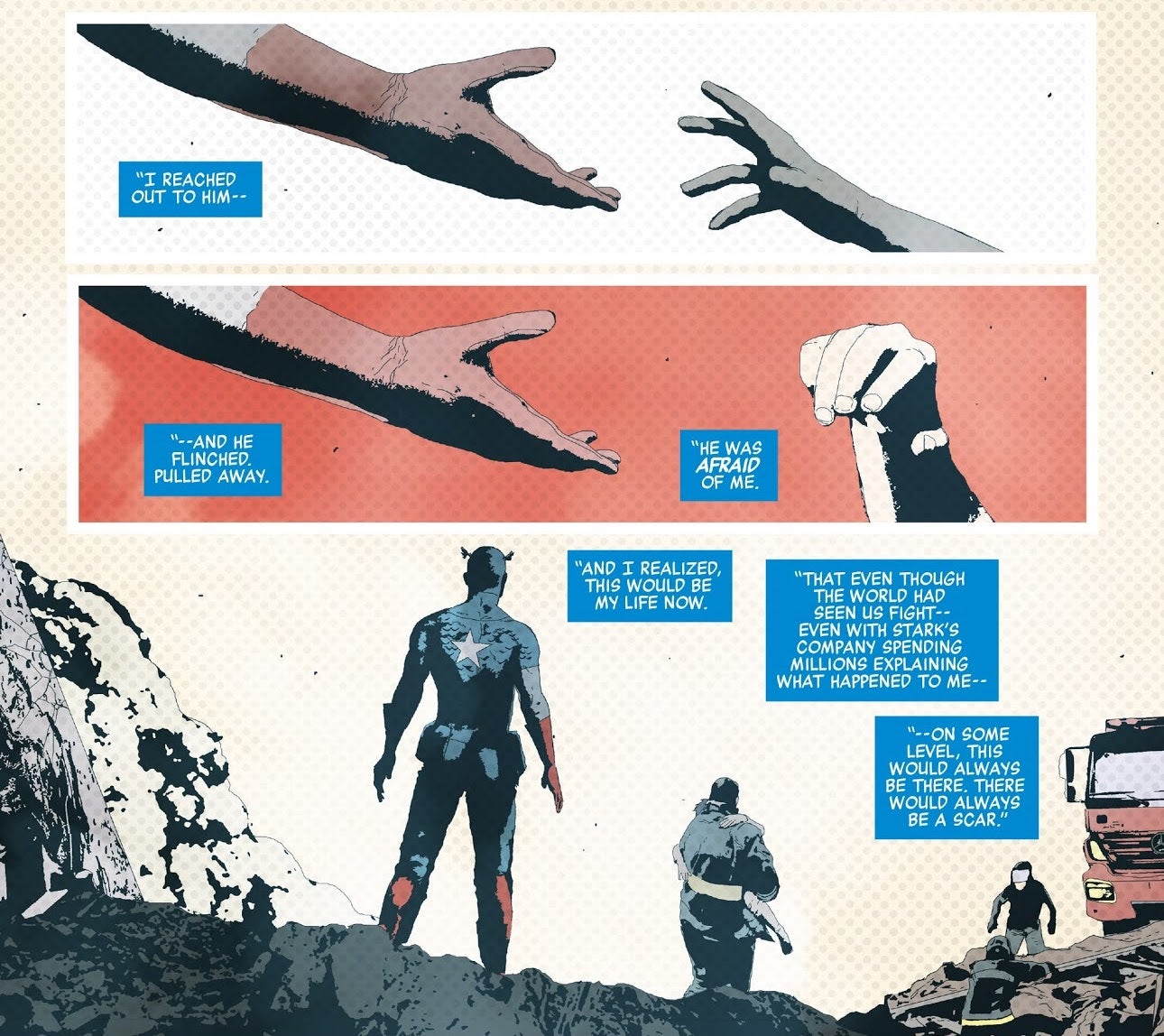 That fear, good Steve explains, is the burden that he has to bear for the rest of his life because of Hydra Steve. There will always be that thought in the public's mind that once, Captain America became a mass murderer in league with Baron Zemo and Madame Hydra. It's a stain that will never wash off his uniform and Secret Empire: Omega wants that to feel like a consequence. But it doesn't. Not quite.

Regardless of whether you buy into Marvel's insistence that Secret Empire was never meant to be taken as commentary on American politics right now, you have to try awfully hard not to see the parallels between the comic's story and certain elements of our current reality. Steve Rogers, a symbol of American exceptionalism, is having a conversation with himself about how he — they — became an avatar for the purest sort of evil. While good Steve can say that his evil twin's actions will haunt him, there's a hollowness to his words because of the fact that Hydra Steve is still alive in the first place.

In keeping Hydra Steve alive, Secret Empire allows for the new Steve Rogers to start with something of a clean slate. He can say that the public doesn't trust him, but comics readers will go into future Captain America books with the tacit understanding that somewhere out there, the real Hydra Steve is still planning his next move. It's a narrative choice that ultimately doesn't force Steve Rogers to reckon with the fact that even though he was manipulated into it, there's part of him that was willing and able to become Hydra's head.

Instead of a having a singular moral crisis that made him confront his inner demons and weaknesses, Steve Rogers is more or less walking away from Secret Empire with a new arch nemesis — and a story with no end in sight.