Flashlights and toy lightsaber might do a decent job of making you feel like a Jedi when you’re twelve, and fancy prop reproductions might do the job when you’re adult. But it is all still make believe. You’re not taking on Darth Vader in your living room, you’re waving a toy and making “vrm vrrm” noises. A new augmented reality game from Disney hopes to change that. Star Wars: Jedi Challenges is Disney’s first standalone augmented reality machine. Created in conjunction with Lenovo, it’s a $US200 set that includes a headset, tracking beacon and lightsaber remote. Pop your Android or iOS phone into the headset, put the beacon on the floor, ignite the lightsaber and your path to becoming a Jedi Master begins.

Now, any product that promises to make you feel like a Jedi obviously has to be approached with a heapin’ helpin’ of scepticism. Giving people a lightsaber feel without providing them with an actual laser sword is not an easy task and it’s one fans have been dreaming about for decades. Scepticism of Jedi Challenges is particularly warranted since this is AR, not VR. You’re not being immersed in a new world, you’re just have it laid over the present one. But, I have to say, even compared to ILMxLab’s super-awesome Trials on Tatooine VR experience, Jedi Challenges lived up to its promise.

I tried Jedi Challenges as part of a Force Friday II event in Glendale, California earlier this month. While it was just one of several, cool, tech-driven Star Wars products coming out on September 1, for me it was easily the standout. And that’s with me not even experiencing the full version of the game. It was just one lightsaber duel, but that was enough. I was immediately hooked.

Once my headset, beacon and lightsaber were all calibrated, Kylo Ren emerged and approach with a menacing walk. As he got closer, the game provided visual cues of where to place your lightsaber to block his attacks. After lining my saber up with the on-screen prompts a few times, Ren was stunned and I went to work slicing and dicing. What I didn’t immediately realise, though, is this is not just a simple block and counter game. I could go on the offensive too. So, after a few blocks, I just started to swing like crazy…and it did not work out. Without any kind of skill or strategy, wildly swinging left me wide open to Kylo’s counters and the screen slowly turned red, which is never a good sign. So I eased up, played defensive a bit more, and eventually won the day. It wasn’t easy, but it wasn’t hard either, which is perfect because it seems like Kylo is one of the earlier challenges in the game. 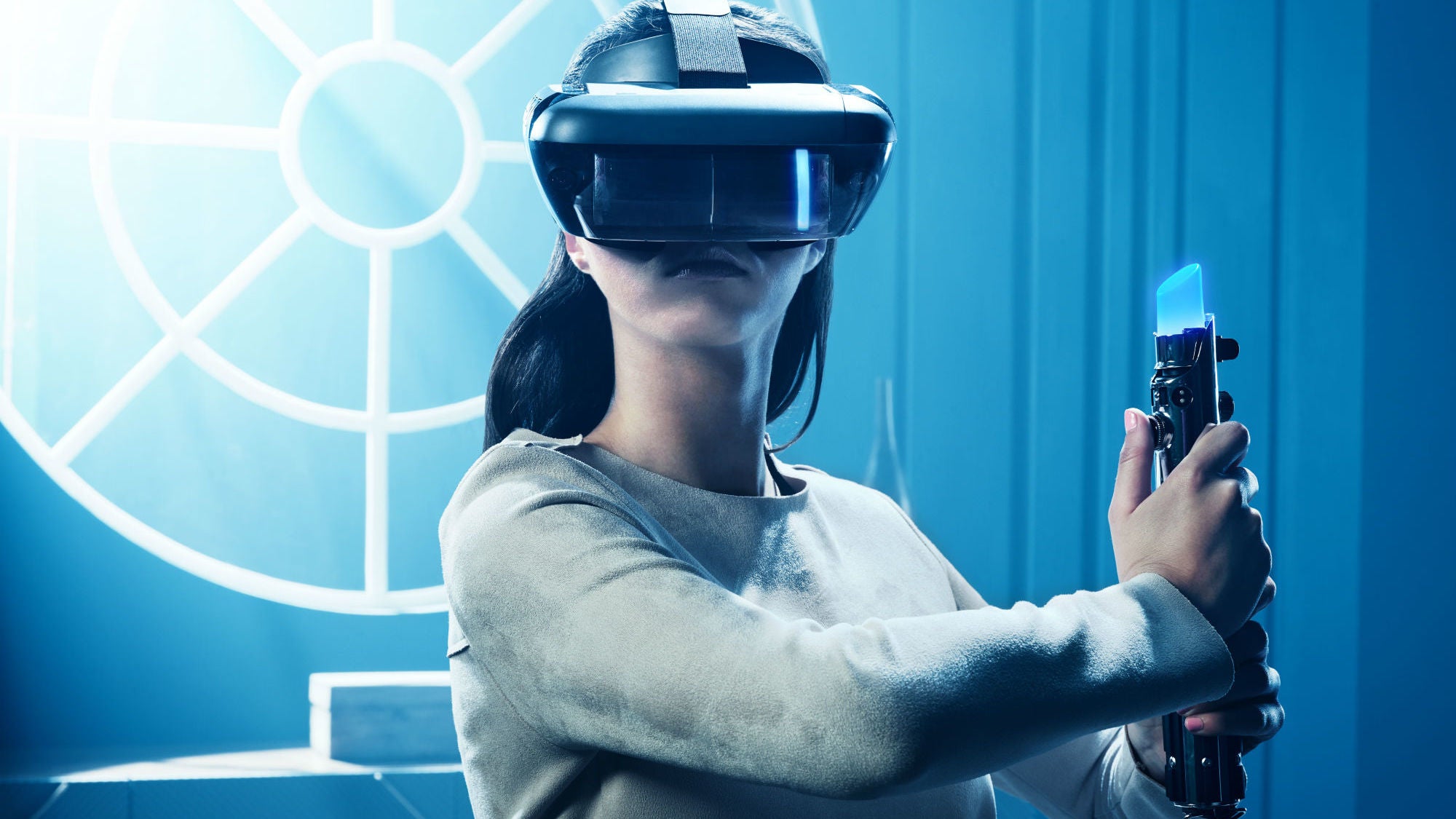 OK…you do look kind of like a nerd holding it. Make sure know one else has a phone handy to record your flailing.

While the lightsaber experience in Jedi Challenges is far more advanced than the one in Trials of Tatooine it wasn’t just the complexity that had me giddy — it was the use of AR (over VR) itself. Seeing your opponent in a familiar location as opposed to a whole other world made it feel more personal. Like, Kylo Ren was on my turf and I had to defend it. The mechanics of the game demo I played make it easy to do that too. When I took off the headset, for probably the first time in my life, I felt like I’d been in a real lightsaber duel. And I wanted to get better at it.

That, right there, was enough for a Star Wars nerd such as myself. Then the team from Disney and Lenovo revealed more. There are two other game modes. The first is “strategic combat”, where the player uses their lightsaber as a remote to move and strategically wage large scale battles in AR. Think Starcraft, but on your living room floor. 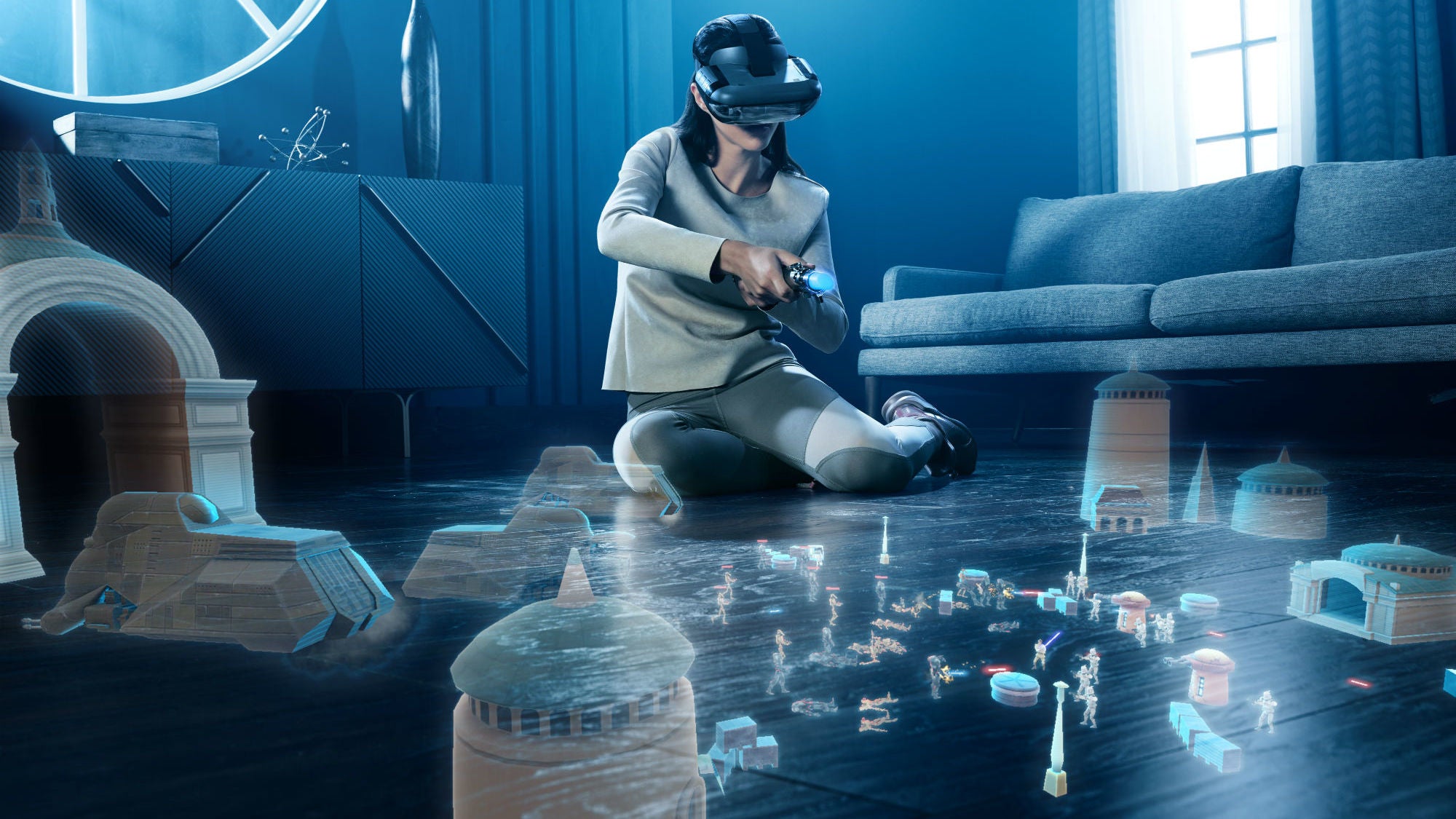 The second is the one that had me freaking. Dejarik, the holochess game Chewbacca plays in A New Hope (and that briefly made a return in 2015’s The Force Awakens) is an early example augmented reality, with holographic pieces on a real-life board. So it’s very fitting that it would show up in the first official AR experience for the series. The version in Jedi Challenges was developed in consultation with Lucasfim to make sure the rules of the game were correct. Which means, barring the Millenium Falcon and a Harrison Ford sidekick, you can play just like the characters in the film. 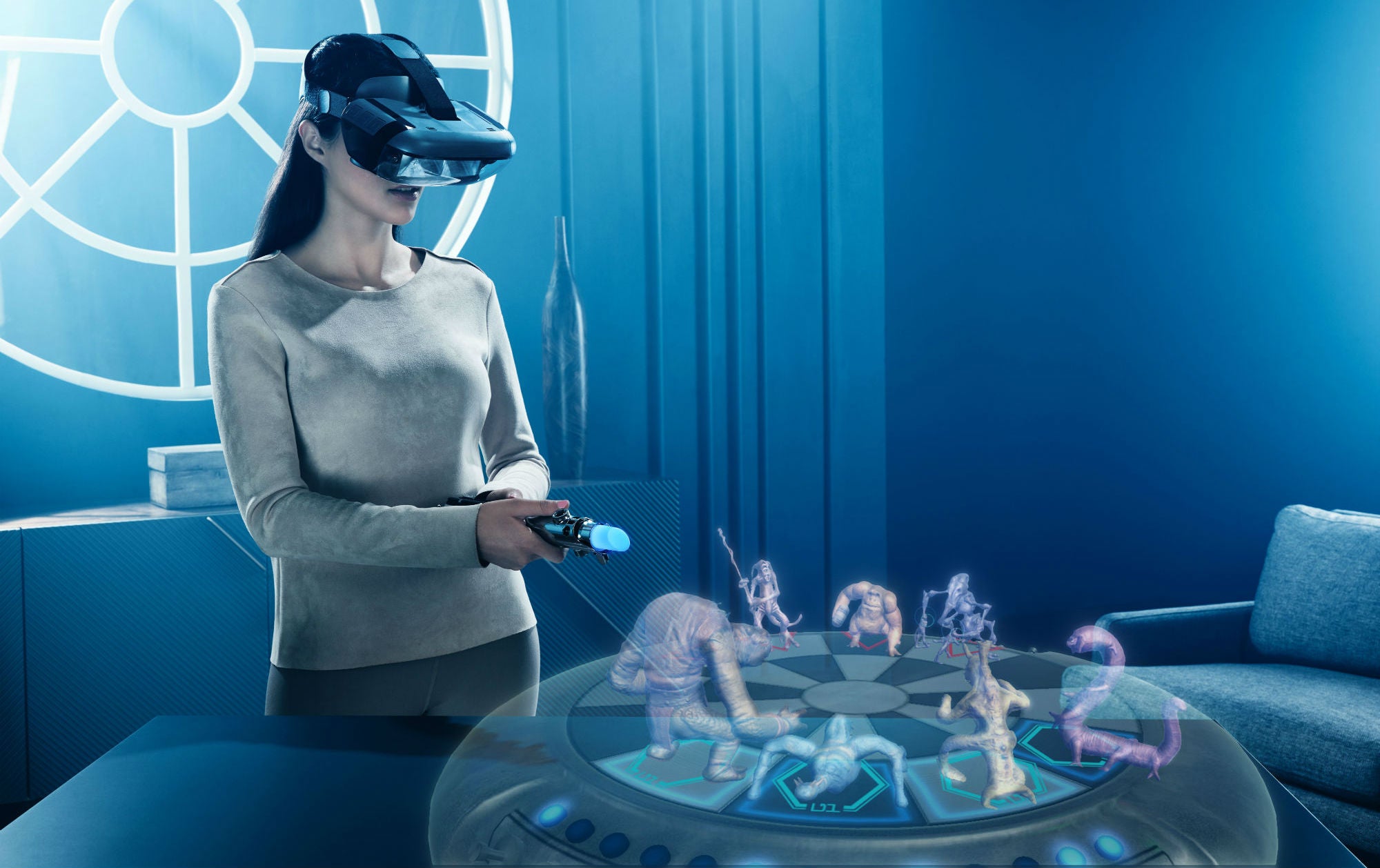 As I understand it, the full Jedi Challenges experience will combine all three of these games into one larger journey. It centres on a new Star Wars character named the Archivist who teaches you, the Padawan (or Jedi in training), how to compete in each trial. You can pick and choose which ones you want to do in any order and, as you move forward in the game difficult increases.

Unfortunately, I didn’t get to try either strategic combat or holochess so I can’t vouch for how well they work or play. But the lightsaber battle? That was amazing. I’d say you can’t put a price tag on living out a life-long Star Wars fantasy but Disney has. It’s $US199 ($250).

Star Wars: Jedi Challenges is available for pre-order in North America starting September 1 at Lenovo and Best Buy only. It is expected to ship in November.