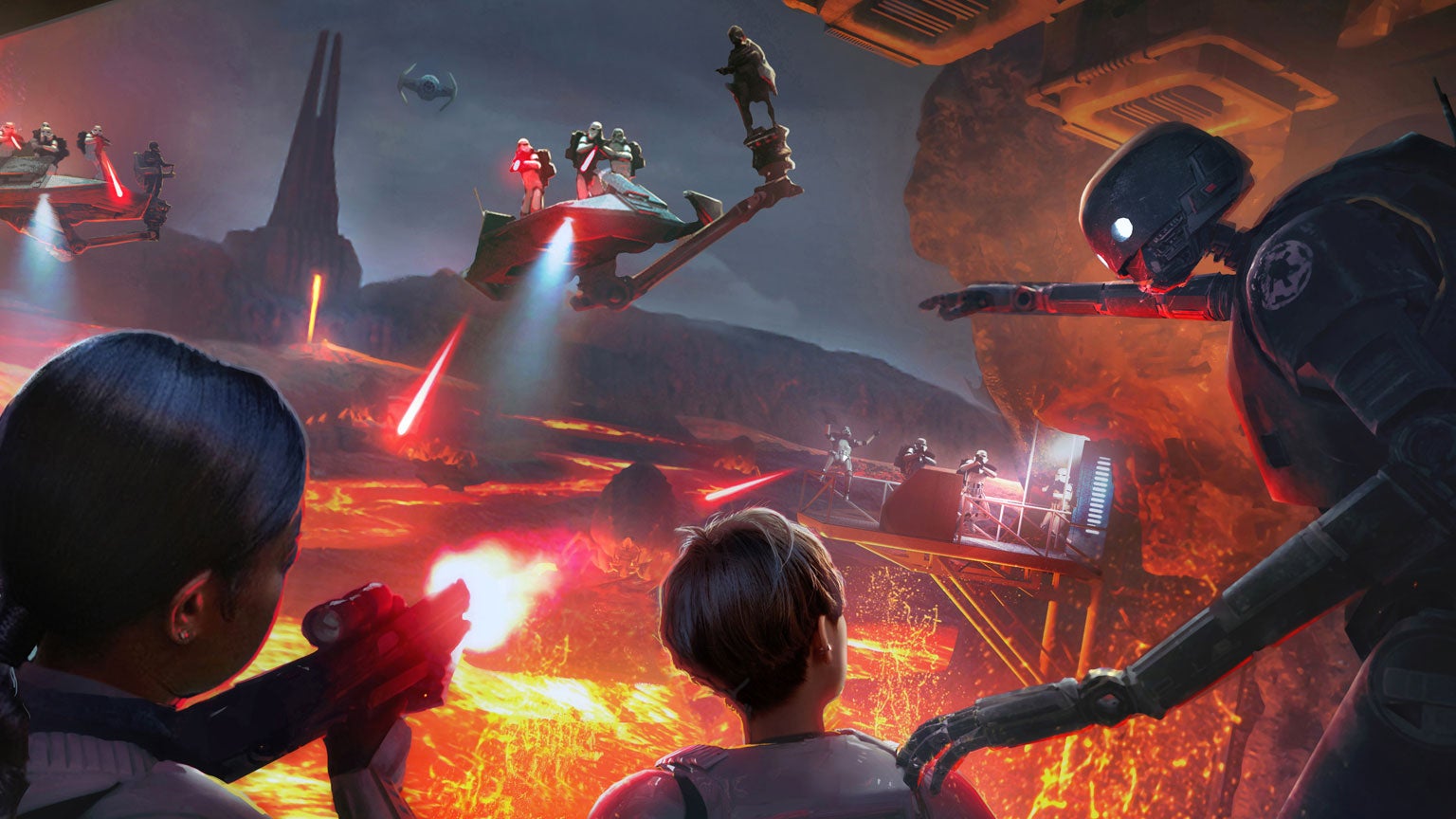 The themed lands called Star Wars: Galaxy's Edge won't open at Walt Disney World or Disneyland Resorts until 2019. However, later this year, Disney is giving fans a little something to hold them over.

Disney just announced a virtual reality experience called Star Wars: Secrets of the Empire will open at Disney Springs in Orlando, FL and Downtown Disney in Anaheim, CA this holiday season. Those are Disney's commercial areas that are very close to, or connected to, the parks, but that you don't need a park ticket to get in. Anyone can go.

Secrets of the Empire is a collaboration between Lucasfilm, ILMxLAB, and THE VOID, and the press release says the attraction "will allow fans to move freely in an untethered, social, and multi-sensory experience, including interaction with friends, fans, and Star Wars characters." From the look of the art, it seems that experience takes place on Mustafar and might have to deal with Darth Vader's castle. Which seems like a pretty good place to find the Empire's secrets.

So what does that all mean? Well, first of all, the fact this is an official Lucasfilm thing, at Disney locations, shepherded by ILMxLAB, means you are talking authentic Star Wars everything. Visuals, sounds, etc. It might even tell an in canon story, but that's just an educated guess. THE VOID is the X factor here but their inclusion is actually very telling. They're a company that's the forefront of a very unique VR experience which, like it says above, is untethered.

To give an idea of what that means, you need only look to Times Square in New York City. There, THE VOID has a Ghostbusters experience that's probably similar to what Secrets of the Empire will be. You can read, and see more about that, at these links. Basically you strap on some haptic gear, a VR headset, and are then free to roam around and explore a wide open space. It more or less puts you inside a video game. Here's a bit more on THE VOID.

That Ghostbusters experience costs $US50 ($63), which is probably in line with what Secrets will cost once it opens. (So you'll need a ticket, just not a park ticket.) But the fact you'll get to basically walk inside a Star Wars movie, interact with it, and learn more about a galaxy far far away, seems worth it. Either way, it will certainly give fans something to chew on as we all patiently await the opening of the parks.

Here's a wider version of the art.