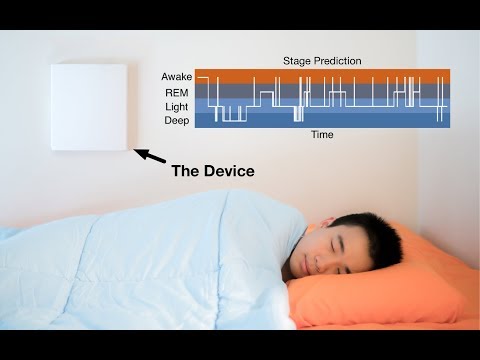 Researchers from MIT have developed a wireless, artificially intelligent sensor that can detect the various stages of sleep, including rapid eye movement — the sleep stage associated with dreaming. The non-invasive system could change the way clinicians diagnose sleep disorders and other health complications.

Wi-Fi radio signals are extremely sensitive, and they have already been used to see through walls, and track a person’s movement and mood. These invisible reflections have also been used to monitor the breathing and heart rates of sleeping children, thus inspiring a team from MIT to develop a sensor that can detect the three major phases of sleep: Light (which strengthens cognitive processes), deep (associated with memory consolidation) and REM (associated with the most intense dreaming).

Working with researchers from Massachusetts General Hospital, Dina Katabi and her team from MIT used an artificially intelligent algorithm known as a deep neural network. By analysing the subtle changes in the frequencies of reflected radio frequency (RF) signals as they bounce off a sleeping patient, the system can match them to the various phases of sleep, including wakefulness. What makes this system particularly powerful, the researchers say, is that it can weed out superfluous movements and background noise, focusing solely on the behavioural measures of sleep, such as pulse and breathing rate.

The sensor itself emits low-power RF signals, is about the size of a laptop, and can be hung on the wall next to a sleeping patient. In tests on 25 healthy volunteers, the technology was accurate 80 per cent of the time, which is comparable to accuracy ratings derived from EEG measurements. But this device, which uses no wires or awkward hook-ups, is far less intrusive and more accommodating to patients trying to catch some Zs.

“Our device allows you not only to remove all of these sensors that you put on the person, and make it a much better experience that can be done at home, it also makes the job of the doctor and the sleep technologist much easier,” said Katabi in a statement. “They don’t have to go through the data and manually label it.”

The MIT researchers, who presented their paper at the International Conference on Machine Learning on August 9, would like to use the device to better assess how Parkinson’s disease affects sleep — a neurodegenerative disorder which is also associated with complex and poorly-understood sleep deficiencies. Future applications could also involve patients with Alzheimer’s, insomnia and sleep apnea. The sensor could even be used for patients who suffer from epileptic seizures, which are tough to spot when they occur during sleep.

Research benefits aside, the idea of an AI inside a Wi-Fi router monitoring your sleep patterns is undeniably cool — if a tad creepy.