The Weird History Of Marvel’s Defenders, Most Of Whom Are Not Appearing On The TV Show 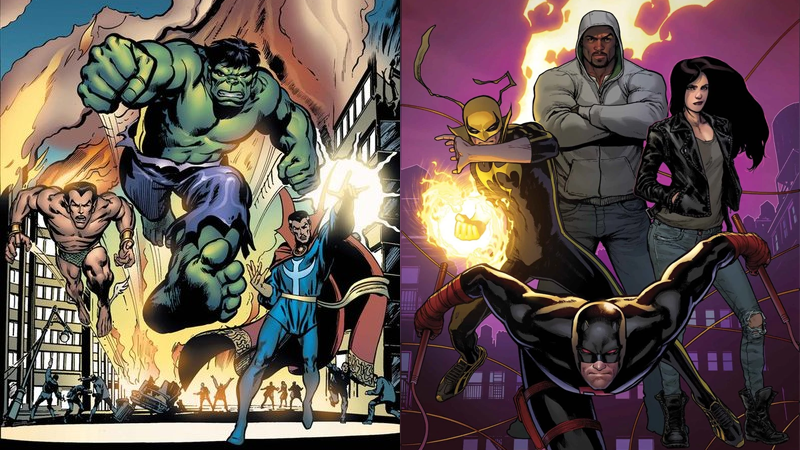 This weekend, after years of build up, Jessica Jones, Daredevil, Luke Cage and the Iron Fist will team up on Netflix for The Defenders, bringing another storied Marvel superteam to live-action… but not really. See, the Defenders of TV and the Defenders of the comics may call themselves the same thing, but otherwise they’re almost nothing alike. 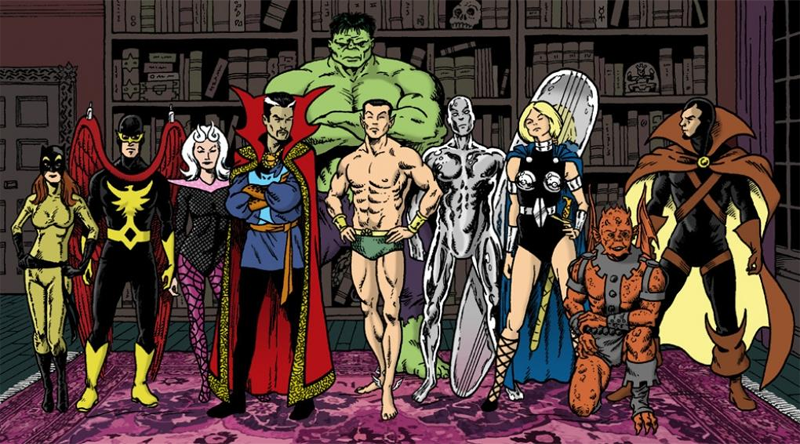 The Marvel Cinematic Universe has already featured the two of the three original Defenders — but not on Netflix. Doctor Strange, the Incredible Hulk and Namor the Sub-Mariner (one of Marvel’s oldest comic characters, and delightfully arseholish King of Atlantis) first came together in the pages of each of their respective comics in 1969 and 1970. The Doctor Strange series had been cancelled mid-arc, so writer Roy Thomas simply carried on Strange’s last story in Hulk and Sub-Mariner, turning it into a team-up special that saw the heroes unite to fight off an invasion of Lovecraftian horrors. A year later Thomas would create another trio, this time featuring Namor, Hulk and the Silver Surfer, but the original three reunited and were officially designated as “The Defenders” in the first issue of Marvel Feature in December 1971.

The Silver Surfer remained absent from the story thanks to an edict by Stan Lee asking that he write all of the cosmic surfboarder’s stories — but when the team’s debut proved to be overwhelmingly popular, the Defenders were given their own series, and Lee quickly approved of new writer Steve Engleheart’s pitch to bring the Surfer into the Defenders fold by the second issue. Four issues into the run Asgardian warrior Valkyrie — the spirit of an Asgardian named Brunnhilde living in the host body of a human woman named Barbara Denton-Norriss — officially joined the line-up, and the classic Defenders were born.

Given the complex range of heroes on the team, the sort of missions that came under the Defenders’ purview was much vaster in scope than that of Netflix’s heroes. They fought everything from alien wizards (such as Yandroth, a “technomancer” from an alternate dimension whose giant robot body became one of the first villains the Defenders fought together), to actual eldritch horrors such as Null the Lifeless, a many-eyed, many-tentacled physical embodiment of the vengeful souls of a race of winged aliens from the Moon.

The weirdness wasn’t just consigned to cosmic foes, either: The Defenders’ bread and butter was in dealing with the depths of the supernatural. From iconic Marvel demons such as the scheming Mephisto — who’s probably best known for infamously annulling Spider-Man’s marriage to Mary Jane Watson — to long-time Doctor Strange foe Dormammu, the Defenders went to hell and back, sometimes literally, to take the fight to the paranormal. That even includes a time they actually fought Satan himself, thanks to the team’s longtime alliance with Satan’s son, Damian Hellstrom. They even occasionally had the time to fight “normal” supervillains, too!

Rise of the New Defenders 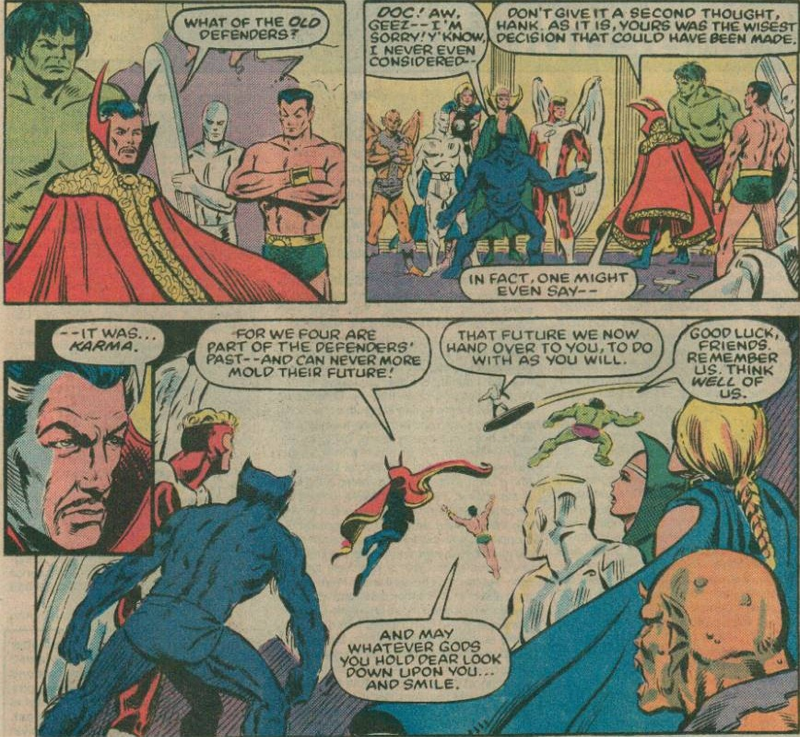 In the early years of Defenders comics, the group was a much less formal team than the Avengers — they were more like a group of friends and acquaintances who happened to go out and save the world every once in a while. That also meant that the Defenders’ membership was a revolving door that spun faster than any of the ones at Avengers tower.

A few staple characters would emerge in the ’70s alongside the primary five Defenders: Hellcat, AKA Patsy Walker, the Marvel romance-star-turned-supernatural-superheroine who would go on to be a major supporting character in the Jessica Jones Netflix series; Gargoyle, a human whose spirit was put inside the body of a gargoyle after a demonic deal gone wrong, and who was originally tasked with fighting the team; and Nighthawk, Marvel’s infamous Batman knockoff, and former leader of the supervillain team Squadron Sinister. But the team’s laissez-faire approach to membership lead to heroes from all walks of life in Marvel’s comics, famous and obscure, joining and departing the group. Heroes such as Luke Cage, Hawkeye and even Hank Pym (in his Yellowjacket persona rather than as Ant- or Giant-Man) stopped by in the mid-’70s for loose alliances with the team. But the team still operated mostly in secret, until the story “Defenders for a Day”.

After a Defenders documentary about the team — and their lax approach to hiring new recruits — was aired to the public, interest in joining the team spiked, and dozens of heroes showed up at the Defender’s no-longer-secret headquarters hoping to join (and promptly quit a few issues later once the mania died down). Among those temporary Defenders was the Iron Fist, joining Luke as the only two members of the Netflix show’s lineup to have formally been a member of the Defenders in the comics. (That’s right: Daredevil, Netflix’s “First Defender”, has never actually been a Defender.)

By the early ’80s, however, big changes were coming to the Defenders. In a bid to shake-up the series the title was re-branded as The New Defenders from issue 125, and Doctor Strange, Namor, Hulk and Silver Surfer were removed from the series — due to a newly-revealed prophecy that claimed should the four unite again, they’d be responsible for the end of the world. Although key players from the ’70s such as Gargoyle, Valkyrie and Hellcat remained, the departure of the original team lead to the rebirth of the Defenders as a much more formal organisation, led by X-Men’s Beast (who had joined the team 10 issues earlier) and now featuring other familiar mutant heroes such as original X-Men Angel and Iceman, alongside new members such as future Guardians of the Galaxy member and telepathic martial artist Moondragon, as regular characters.

This more structured superhero team take on the Defenders wasn’t to last. Although the changeover to the new team had drawn increased interest and The New Defenders performed well saleswise, Marvel decided to cancel the series 27 issues later in 1986 to help establish a new roster of series. The final issue saw Moondragon, possessed by a psychic demon conveniently named the Dragon of the Moon, betray (after seeing visions of her teammates talking behind her back, of all things!) and slaughter several of her fellow Defenders, freeing up the remaining mutants on the team to join the newly-created X-Men spinoff team X-Factor as per an editorial request. To make the end of the Defenders series seem even more pointlessly publisher-mandated, several of the killed heroes, including Valkyrie and Gargoyle, were resurrected almost immediately in other series to ensure that at least some of the original team lived on elsewhere. 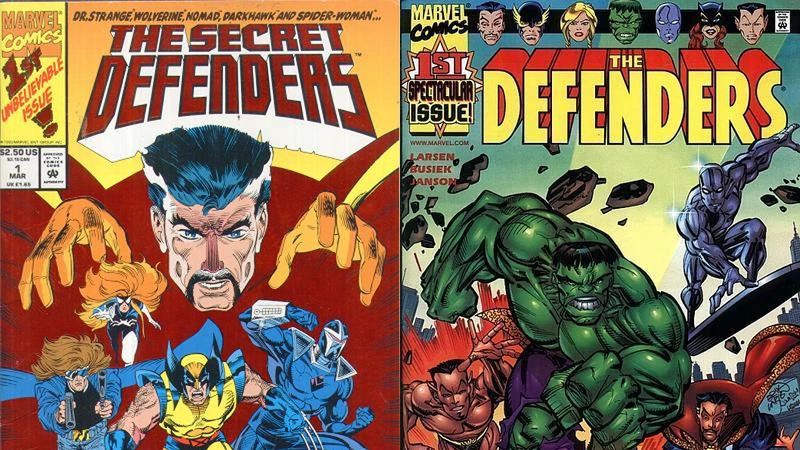 Over the next two decades, the Defenders concept would attempt several reboots and returns. The original Defenders reunited for two storylines in 1990 — in which they discovered that the prophecy that drove them apart was an elaborate hoax designed to, well, drive them apart — but the team would not get its own comic again until 1993’s Secret Defenders, and even then it was radically unlike what came before. Even though the original team had discovered they could work together again without dooming the world, only Doctor Strange returned, and in an homage to the original series’ rotating cast, each issue saw Strange recruit a new team of Defenders for a one-off mission, disbanding them upon completion to keep the Defenders’ return a secret.

This meant the series could feature big-name Marvel heroes who otherwise couldn’t commit to a formal team — Wolverine, Spider-Man, Captain America, Scarlet Witch and more made appearances — but the series quickly hit troubled waters when Marvel removed Doctor Strange himself from the series to join the supernatural team Midnight Sons. Although leadership of the Secret Defenders would continue under the guidance of a far less popular character — Strange’s fellow mystic Doctor Druid — without Strange Secret Defenders itself would last just 25 issues in total, ending in 1995.

It would take Marvel another six years to attempt a Defenders relaunch — this time with a curse bringing the team together again rather than forcing them apart. Hexed to always unite and respond to grave threats to Earth, the original four Defenders were once again reborn a superhero team… for just 12 issues, when it was revealed that the aforementioned techno-wizard Yandroth, one of the team’s earliest foes, was actually behind the curse that reunited them. Yandroth dominated the minds of the four Defenders, reforging them as “The Order” for a six-part follow-up miniseries that saw the return of Hellcat, Valkyrie and Gargoyle to save their friends from being turned into world-controlling madmen. At the end of the series, the Defenders were disbanded once again — this time seemingly for good. 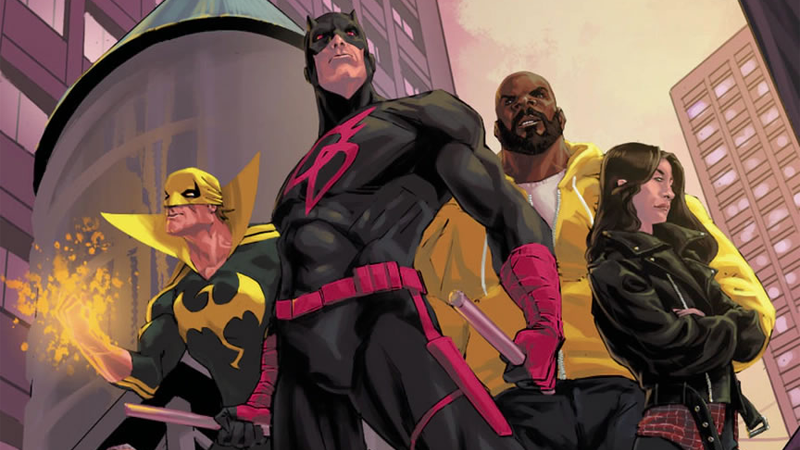 So what’s up with the Defenders now? Several attempts have been made to bring the team back since The Defenders and The Order at the turn of the 21st century. A 2005 comedic miniseries re-imagined the team as a dysfunctional group sick of trying to reform after several attempts, while The Last Defenders saw Tony Stark help form a post-Civil War team — lead by Nighthawk, and featuring She-Hulk, Colossus, and the incredibly obscure Marvel hero Blazing Skull, who has a flaming skull for a head but is not related to fellow flaming-skull-owner Ghost Rider — as part of his “50 State Initiative”. He assigning the new Defenders to New Jersey, but the team was quickly disbanded due to gross incompetence by Tony; Nighthawk later reformed the team (adding back Damian Hellstrom as a team member to replace Colossus) as a secret superhero squad acting outside of government influence, but they were sadly never seen again.

The 2011 event series Fear Itself ultimately lead to two more attempts to get a Defenders book up and running. The first, launching in 2011, brought together the original team of Doctor Strange, Namor and Silver Surfer, alongside the Red She-Hulk and Iron Fist for a kooky, irreverent series, but it was sadly cancelled after 12 issues. A quasi-follow up in 2013 called Fearless Defenders imagined an all-female group of heroes, led by Misty Knight and Valkyrie, that followed a similar style. Sadly, however, it ultimately met a similar fate and was cancelled just a month after Netflix and Marvel announced a deal to bring a new team of Defenders to the streaming service.

That ultimately brings us to 2017, and the arrival of a new ongoing Defenders comic — this time much smaller and much less weird than the series that started it all nearly five decades ago. Written by Jessica Jones co-creator Brian Michael Bendis, the new Defenders series pulls inspiration directly from the Netflix shows rather than the teams that came before, with Jessica Jones, Luke Cage, Danny Rand and Matt Murdock coming together to tackle crime on the streets of New York.

Sure, it looks a lot more like the TV show you’re going to start binge-watching this weekend, but unless Yandroth comes back for anther rematch, it looks like it will barely scratch the surface of the Defenders’ long, bizarre comics history.