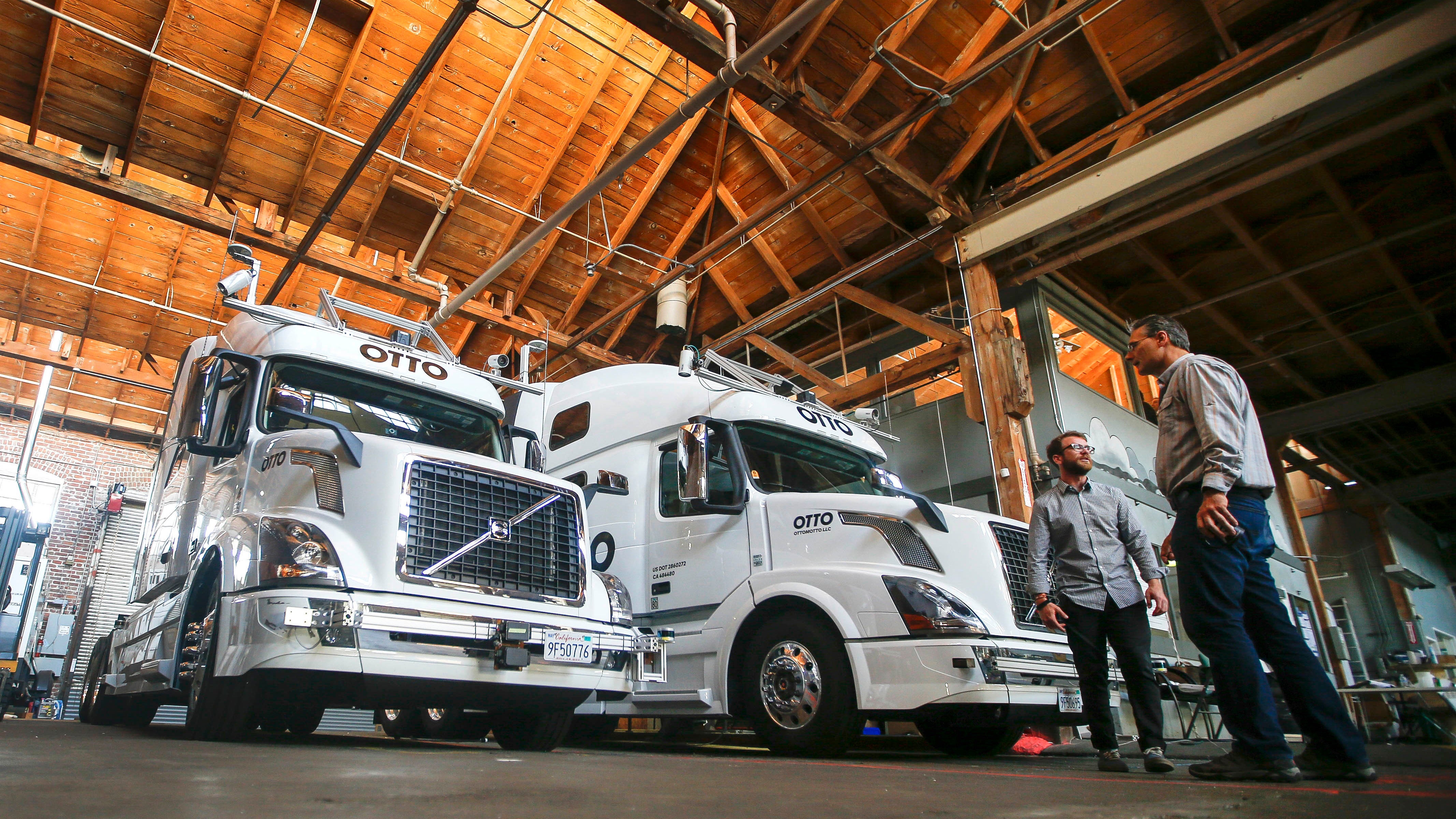 As Uber and Waymo frantically prepare for the October trial over self-driving technology, we’re getting more and more insight into what went on in the months leading up to Uber’s $US680 million ($860 million) acquisition of the autonomous trucking startup Otto. Text messages between Otto co-founder Anthony Levandowski and former Uber CEO Travis Kalanick, as well as a deposition with Kalanick, were made public recently and shed light on how the pair bonded before officially going into business together.

The two executives bond the way a lot of us do — sharing links to news stories on our favourite websites (including Gizmodo!), talking crap about Elon Musk, and, oh yeah, taking a joyride in a self-driving semi-trailer.

The pair traded text messages about the ride, which appears to have occurred in February 2016, and Kalanick discussed it in a deposition with Waymo’s lawyers. “I think I visited him prior to the deal happening. I took a ride in one of their trucks, which was an interesting experience,” Kalanick said.

As it turns out, the DMV was interested in Levandowski’s autonomous trucks, too.

“In April 2016, a DMV investigator went to Anthony Levandowski’s house in Palo Alto after the DMV received an inquiry from the City of Palo Alto,” a spokesperson for the California Department of Motor Vehicles told Gizmodo.

However, there are loopholes for entrepreneurial ex-Googlers who want to start self-driving truck companies. The California DMV breaks out self-driving vehicles into a system of levels of autonomy. If a vehicle can’t truly drive itself without active physical control, California doesn’t require its makers to get a permit. “An autonomous vehicle does not include a vehicle that is equipped with one or more collision avoidance systems, such as electronic blind spot assistance, automated emergency braking systems, park assist, adaptive cruise control, lane keep assist, lane departure warning, and traffic jam and queuing assist,” the DMV says.

After the investigator left Levandowski’s house, he texted Kalanick: “Just wrapped with the DMV, it was the city of Palo Alto freaking out about AV trucks testing and were asked to investigate. The guys were happy with our answers and were [sic] in the clear.”

In his deposition, Kalanick confirmed that Otto’s trucks did have a human safety monitor. “He had — he had — you know, he had trucks that were — you know, let’s call them self-driving trucks, of course, with a safety driver. I was in one of them. Glad there was a safety driver,” Kalanick said. Gizmodo contacted Levandowski’s lawyer and an Uber spokesperson for comment and will update if they respond.

This February — almost exactly one year since Kalanick and Levandowski first took that ride in one of Otto’s trucks — representatives from the DMV and the California Highway Patrol finally met with Otto to discuss its technology.

“At that meeting representatives from Otto stated the truck technology used in California is the type of advanced driver assistance systems that cannot drive the vehicle without a person in the driver’s seat actively monitoring the vehicle,” the DMV spokesperson said. (It’s unclear if Otto was demonstrating different technology in California than it featured in its May 2016 launch video, shot in Nevada, which showed a truck driving down a highway without anyone in the driver’s seat.)

In June, CHP and DMV conducted a site visit at Otto to determine what level of autonomy its trucks had achieved and concluded that its technology was not autonomous enough to be require a California permit. “The company has a ‘Level 2‘ driver assistance system that is in development and does not currently meet the definition of autonomous technology under California law,” the DMV spokesperson said.

The episode is a prime example of tech executives skirting the edge of legality to run their businesses, but it also reveals why Uber might have been so resistant to going through the formal process to get a DMV permit to test autonomous vehicles earlier this year. After all, Levandowski had recently sat down with a DMV investigator and emerged permit-free. Why not take the same approach at Uber?

Uber launched its self-driving car program in San Francisco in December 2016 without a permit from the DMV, arguing that its vehicles had human operators supervising their behaviour and therefore didn’t meet the autonomy standards. After one of the self-driving vehicles was caught running a red light, the DMV revoked registrations for Uber’s entire fleet of 16 self-driving cars and said Uber would need to apply for an autonomous vehicle testing permit.

Levandowski’s experience with the DMV investigator who visited him at home that April likely influenced his response when, as head of Uber’s self-driving car project, he received emails from the DMV complaining that Uber was operating autonomous vehicles without the necessary permit.

“We are not an AV [autonomous vehicle] and getting a permit reinforces the misperception that we are an AV,” Levandowski wrote in an email to the DMV obtained by the Verge. “I promise you that for a very long time ‘active physical control or monitoring by a human operator’ will be required for the operation of all our vehicles. I will give you a lot of notice before that changes. Responding to your latest email, we don’t plan on applying for a testing AV permit since we’re not testing AV’s in the state.”

This March, after temporarily ending its autonomous vehicle testing in California altogether, Uber caved and applied for its testing permit. Its cars haven’t been busted running any more red lights, but safety seems to have been an issue for Otto, too. In February 2016, Levandowksi texted Kalanick to let him know that they were wrapping up testing for the day. “We had a close call but no contact with anyone or anything,” he wrote.