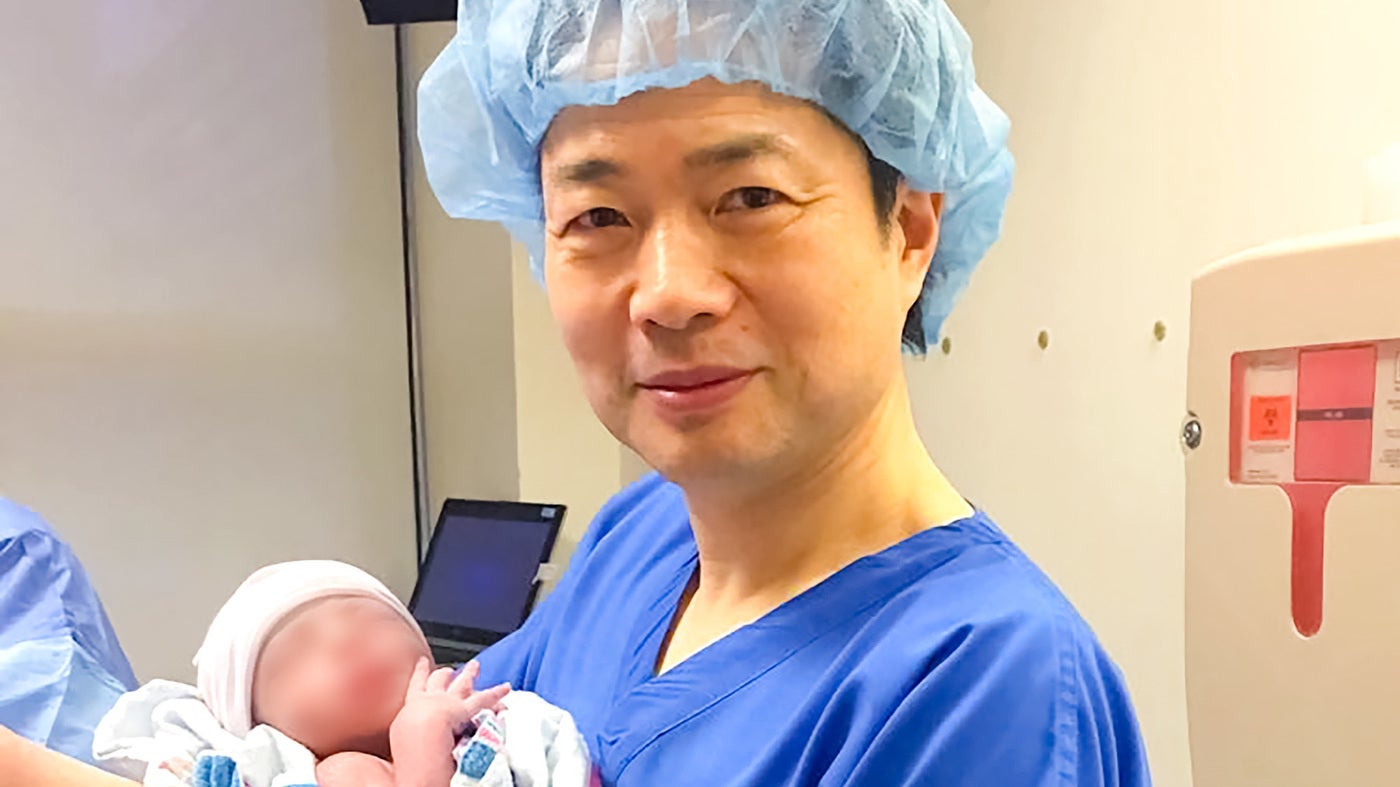 John Zhang, a New York fertility doctor, wanted to push the boundaries of science and fertility by giving women at risk of passing on serious genetic conditions a chance at healthy kids through an IVF technique that uses the DNA of three people. But on Friday, regulators at the US Food and Drug Administration issued a warning: Zhang, they said, would not be allowed to move forward with the procedure. At least, not if any part of it took place in the United States.


John Zhang with the first baby born through an IVF technique that uses the DNA of three people. The baby was born in April 2016. Image: New Hope Fertility Clinic

The IVF technique in question involves replacing the teeny amount of mitochondrial DNA in an embryo with DNA from a donor in order to prevent mitochondrial diseases from being passed down by a mother. It’s known as the “three-parent baby technique” because, technically speaking, it creates an embryo with three genetic “parents”.

Last spring, Zhang made headlines when his clinic announced that for the first time, a baby had been born using the procedure. To produce a three-parent baby, Zhang relied on a tricky legal work-around. Because implanting a genetically-modified embryo is illegal in the US, that part of the procedure took place in Mexico. But because Mexico also has rules that interfere with producing a genetically-modified embryo there, the embryo was first made in the US.

This winter, Zhang began marketing his procedure in the US through a new company he founded, called Darwin Life. It was marketed as not only a fix for mitochondrial diseases but also as way to solve age-related infertility issues. Like his first procedure, the eggs would be designed in the US and implanted elsewhere. The procedure, Zhang told Gizmodo earlier this year, could cost as much as $US100,000 ($126,406).

In its Friday letter, the FDA said that after a request to conduct a clinical investigation of the technique was denied, Zhang had told regulators he would not perform the technique again without permission. Still, the agency wrote, he continued to promote it on the company website, his personal blog and elsewhere. Creating embryos intended for human research is against regulations, the FDA wrote, as is exporting those embryos. US Congress has banned the FDA from even reviewing proposals for clinical uses of genetically-modified human embryos. Last year, a panel of US government advisers said it is ethical to begin testing three-parent techniques in pregnancy under strict guidance, but currently, the bans stand.

When reached for comment, Zhang’s company said that it plans to comply “with all applicable requirements”.

“Darwin Life takes FDA’s letter seriously, and is in the process of clarifying the current status of our activities with FDA,” the company said.

The FDA said only that it does not comment on open matters, other than to say it “may or may not pursue further communication or interaction with a firm, depending upon the available information”.

The idea of using genetic material from a donor “parent” to fix problematic egg cells isn’t new. In the 1990s, several babies were born with genetic material from a donor using a different technique, but some of them eventually developed genetic disorders and the technology was never approved. Then, too, mitochondrial disease was the main focus of treatment. Mitochondrial DNA is made up of just 37 genes and can only be passed on to a child by its mother. Replacing that tiny bit of genetic code could save a child from a deadly disorder they would otherwise definitely inherit.

So far, three-parent baby techniques have only been legally approved in the UK, under very strict guidelines. In March, the UK issued the first licence for a clinic to perform a procedure similar to Zhang’s. Critics have argued that the US is obstructing a technology that could help eliminate rare diseases. But Zhang’s methodology has also come under fire, with critics questioning whether children would be healthy long term and whether it might work as a treatment for age-related infertility at all.

“I’m seeing too much of a focus on advertising and commercialising [the technique] and not enough of an emphasis on complying with regulations and generating safety and efficacy data before entering the marketplace,” Leigh Turner, a bioethicist at University of Minnesota, told Gizmodo. “Of course, given the current ban on such research in the US, at present it isn’t possible to conduct the clinical research needed to generate such data.”

Leigh said Darwin Life’s only way to continue performing the technique would be to commit “regulatory arbitrage” and relocate the whole company to another country.

“Even though the FDA issued an untitled letter rather than a warning letter, the FDA is clearly indicating what kind of marketing claims and clinical research it will not permit,” he said.