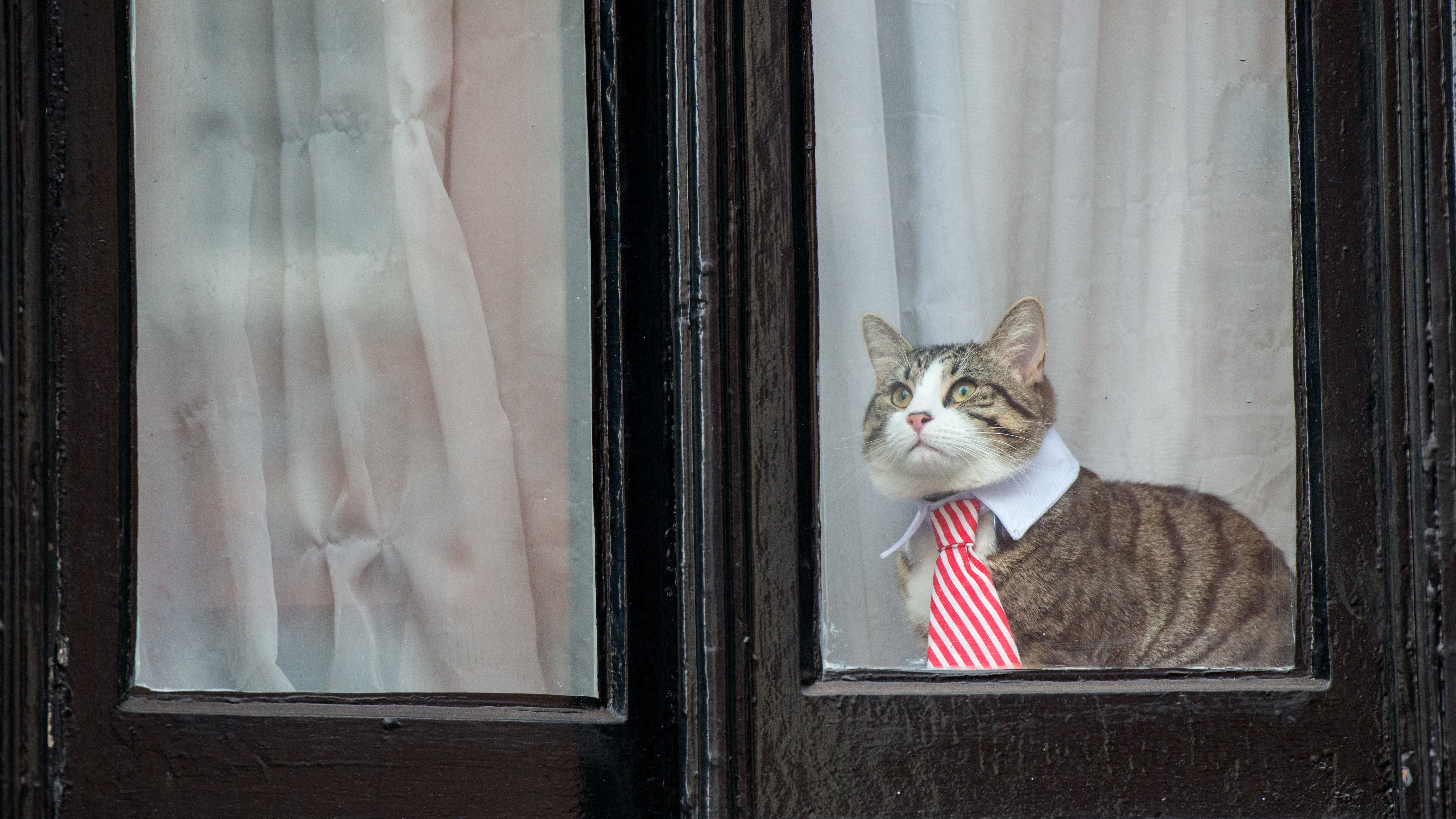 When someone is as obsessed with controlling the narrative as Julian Assange is, it’s almost to be expected that they would view a cuddly pile of fluff as a means of propagandizing. Such was the destiny of Embassy Cat.

In a newly published profile of the WikiLeaks founder, the New Yorker reveals that Assange may have lied about the origin story of his famous pet. Assange reportedly told British tabloids that the cat was a gift from his children, but “someone who knows him well” told New Yorker writer Raffi Khatchadourian that that account isn’t true:

“Julian stared at the cat for about half an hour, trying to figure out how it could be useful, and then came up with this: Yeah, let’s say it’s from my children. For a time, he said it didn’t have a name because there was a competition in Ecuador, with schoolchildren, on what to name him. Everything is P.R. — everything.”

It seems that the only endearing thing still in Assange’s sphere of influence was initially regarded a tool of public deception.

Assange has been holed up in the Ecuadorian embassy in London since he was granted asylum in 2012, hoping to evade extradition to Sweden for sexual assault allegations (which have since been dropped). The profile contains a number of other interesting details about Assange’s time confined within the embassy, including an anecdote about his arrival and the measures he was ready to take to avoid relocation.

According to Khatchadourian, when British authorities allegedly threatened to enter the embassy to forcibly remove the WikiLeaks founder, Assange invested in some hardware:

Assange told me that, preparing for imminent arrest, he readied a pair of handcuffs so that he could physically secure himself to the Ecuadorian consul.

More colorfully, Assange reportedly responded to Senator Ben Sasse’s suggestion that the Wikileaks founder should “spend the rest of his life wearing an orange jumpsuit” in March by playing a little bit of dress-up:

That night, Assange was dressed in an orange jumpsuit, and padding around the Embassy with a pint of yogurt. “He said he wanted me to wear a jumpsuit for the rest of my life,” he told me, and grinned. “I’m already there! I wanted to get one that was more like a velvet orange catsuit — and to look very relaxed and accomplished — but this is the best we could get.”

The profile also includes predictably troubling quotes. When it was announced that Sweden issued an arrest warrant for Assange, he reportedly texted Khatchadourian a smiley face emoticon along with this message:

Assange also repeated his claim that the source of the leaked DNC emails was not in the Russian government, telling Khatchadourian “that other people should not get the credit for our epic scoop”:

“It’s very irritating that Putin is getting the credit!” he declared on another occasion. “They are giving him credit for our hard work!”

While sadly lacking further details about Wikileaks’ feline ally, you can read the whole thing (and more predictably megalomaniacal quotes from Assange) here.