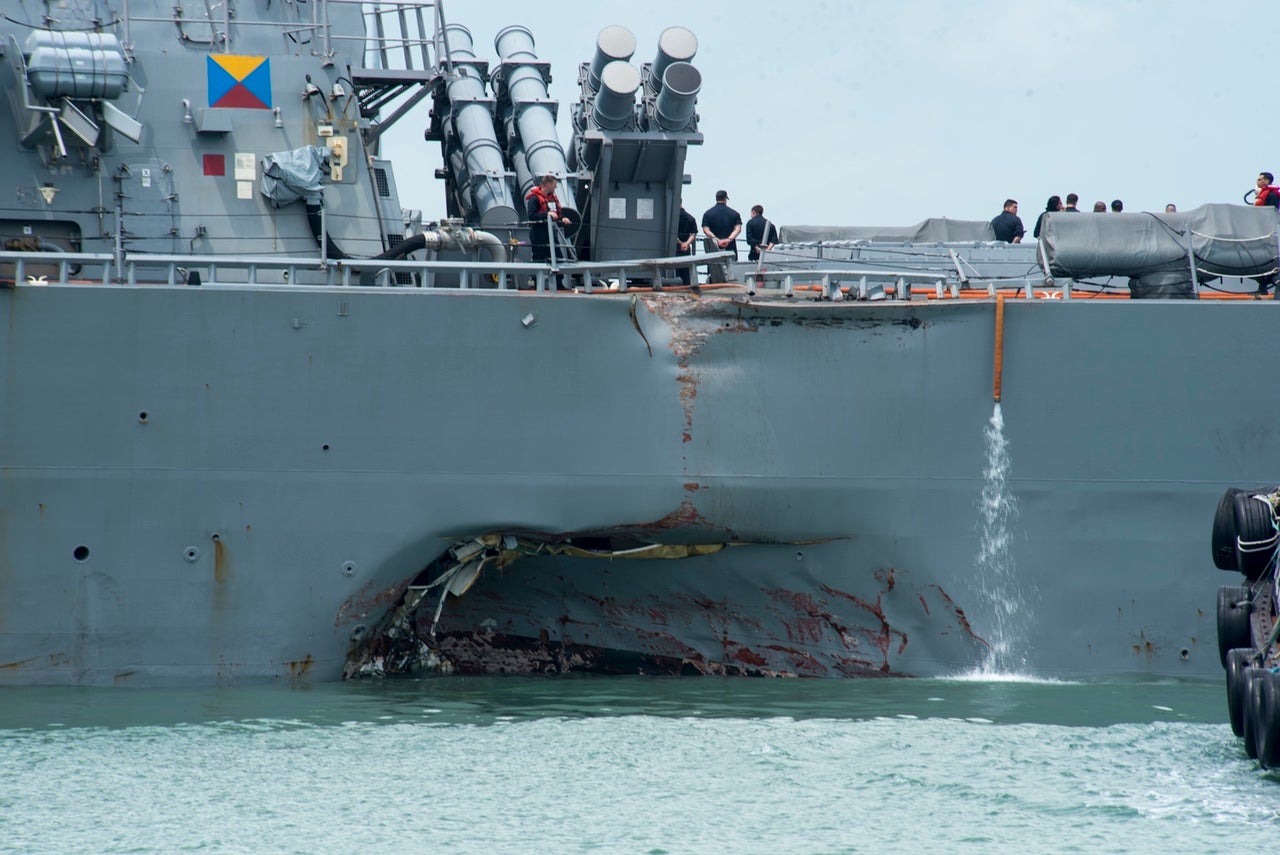 The guided-missile destroyer USS John S. McCain collided with an oil tanker near Singapore yesterday, leaving five injured and 10 sailors still missing. It’s the second US Navy ship to have a major collision with a civilian ship since June and the fourth in the past year.


Damage to the USS John S. McCain is visible as it steers towards Changi Naval Base in Singapore following a collision (U.S. Navy photo by Mass Communication Specialist 2nd Class Joshua Fulton/Released)

The collision occurred at 5:24AM local time on Monday. The USS John S. McCain collided with the Alnic MC, a 183m oil tanker with a gross tonnage of 30,000, according to the US Navy.

“Search and rescue efforts are underway in coordination with local authorities,” the US Navy said in a statement. “In addition to tug boats out of Singapore, Republic of Singapore Navy Fearless-class patrol ships RSS Gallant (97), RSS Resilience (82), RSN helicopters and Police Coast Guard vessel Basking Shark (55) are currently in the area to render assistance.”

When President Trump was asked about the incident yesterday he replied, “that’s too bad.” He later tweeted out that his thoughts and prayers were with the US Navy sailors. 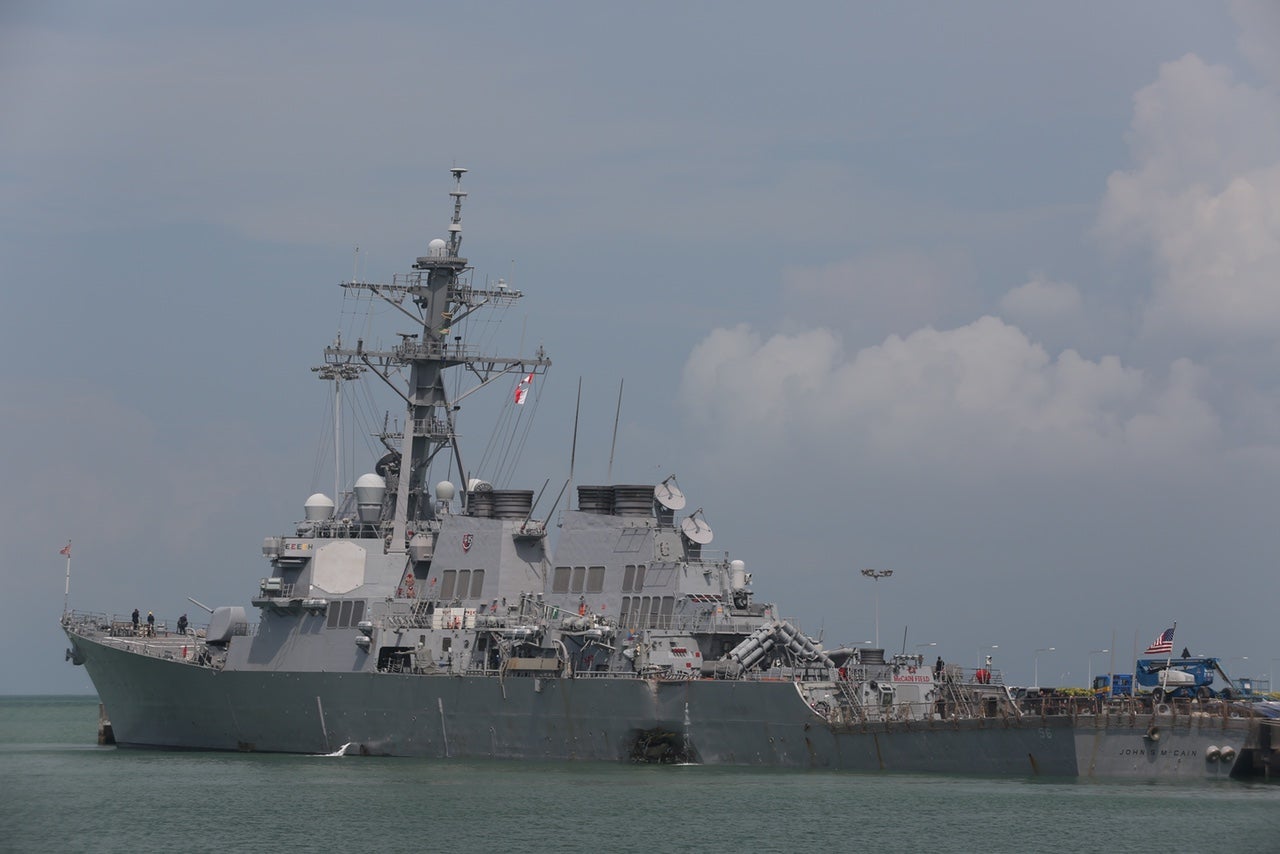 Damage to the USS John S. McCain is visible as it steers towards Changi Naval Base in Singapore following a collision (US Navy photo by Mass Communication Specialist 2nd Class Joshua Fulton/Released)

The incident with the USS John S. McCain comes on the heels of a bad year for the US Navy. The USS Fitzgerald collided with the merchant vessel ACX Crystal back on 17 June 2017. The report on that collision concluded that the collision “was avoidable and both ships demonstrated poor seamanship”. Seven sailors died during that collision.

The ship is named for both the father and grandfather of Senator John McCain, who issued a statement on Twitter immediately after getting word of the incident.

Cindy & I are keeping America's sailors aboard the USS John S McCain in our prayers tonight – appreciate the work of search & rescue crews https://t.co/jzk9giXbfg

“Collisions like these are extremely rare and two in one summer, both from 7th Fleet based in Japan, is stunning,” David Larter, a US navy veteran told The Guardian.

“The number of breakdowns that have to occur for something like this to happen make them a rare occurrence. Sailors monitor radars round the clock, they have multiple sailors standing watch on the bridge which also has a radar, and they have at least one lookout posted at the back end of the ship to watch for exactly these kinds of situations,” Larter continued. 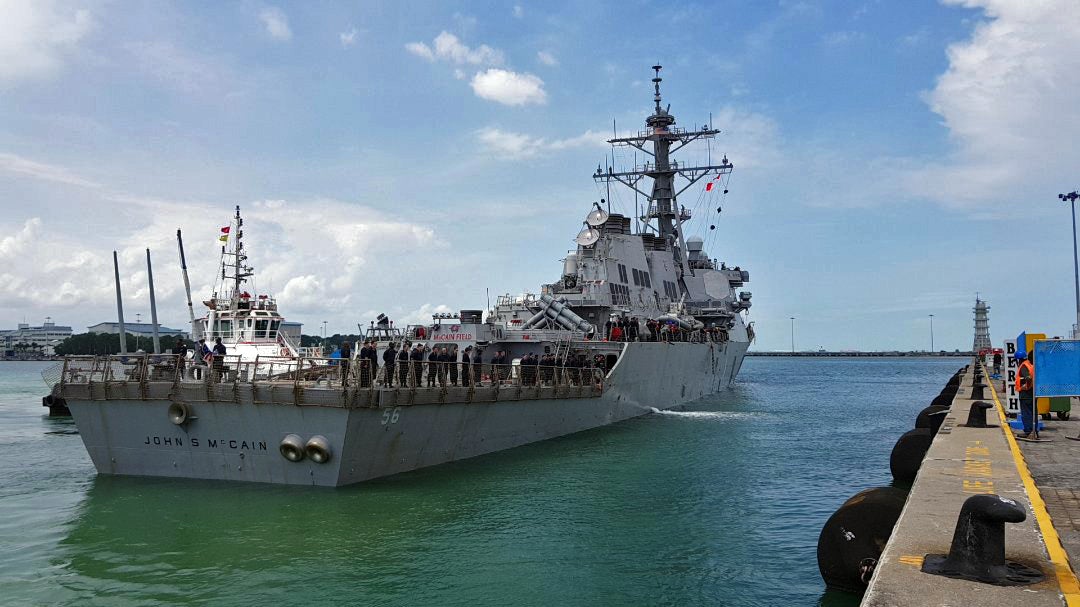 Both the USS Fitzgerald and the USS John S. McCain are ballistic missile defence ships, and would be crucial if activity on the Korean peninsula turned sour. With any luck, the ships won’t be needed and cooler heads will prevail. But let’s just say we’re not holding our breath.

The US Navy is now going to be looking at their entire Pacific fleet after this one.

The US Navy has also released video of the USS John McCain arriving at Changi Naval Base.