This year’s Ghost In The Shell adaptation was a visually stunning movie — helped in no small part by the gorgeous practical effects, props and costumes built by New Zealand’s Weta Workshop. In fact, far more of the film’s beautiful visuals were built physically than most people would expect. We went to Weta to find out what went into building the world of Ghost In The Shell– and what it’s like when your painstakingly crafted work is hidden behind layers of digital effects.

It may surprise some people (myself included) to know that Ghost In The Shell used more practical effects than most other films of its kind do. With Weta Workshop on the job, you’d hope they’d make use of that talent. You may have seen Adam Savage’s feature on the animatronic robot geisha heads, or the fully silicone thermoptic suit, but there were many other scenes that required building huge props and complicated animatronics rigs, not to mention the prosthetics that created the film’s many minor characters.

Weta Workshop’s Head of Manufacture, Rob Gillies, said that it was often a case of convincing Director Rupert Sanders of the case for creating film elements physically — especially in a film landscape where digital is the norm.

Adam Savage Geeks Out Over Ghost In The Shell's Robot Geishas

A visually-rich film like Ghost in the Shell that's filled with futuristic sets and cyborg characters could have easily relied on green screens and digital effects to bring its entire world to life. But as Adam Savage discovered at a recent visit to Weta Workshop, the film version of the iconic manga still turned to animatronics to realise some of its most iconic characters.

One scene that was shot largely in camera, though it didn’t look it, was the ‘shelling sequence’ that opened the film. While the construction of the ScaJo ‘shell’ looked like a lot of slick special effects, it was mostly composed of Weta’s handiwork — from a full skeleton to a sleek white mannequin and the pool full of viscous white fluid it emerges from. While the robot geisha animatronic got a lot of attention into the lead up to the film, the shelling sequence also required a lot of complex animatronics, like a rig to slide the ‘brain’ inside the body, and another that had the ‘petals’ of the skull closing over.

Unlike films like The Lord Of The Rings that were the result of close collaborations between Weta Workshop and Weta Digital however, Ghost In The Shell was handed over to an outside company for its digital effects. This meant that the original creators had little idea how their work would actually look until they saw the finished product. A lot of the original practical effects were layered over with generous amounts of CGI — pieces such as the thermoptic suit were almost lost beneath the digital constructions that ended up on the screen.

Of course these pieces are always designed to coexist with their digital counterparts, but when you see the kind of incredible work and care that gets put into the practical effects it’s easy to wish they got a little more space to show off.

I felt this especially with the stunning thermoptic suit, as that was one piece that used some of the most cutting edge technology used in practical effects for film.

We talked to Weta costumer Flo Foxworthy about the suit she took the lead on, and even got to see it up close. It used a material that Weta was already incredibly familiar with, silicone, but used it in a way that was completely new to them — and to the whole industry, in fact, as it ended up being the first of its kind in the world. 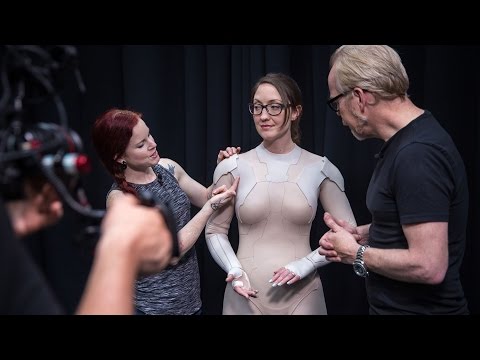 Watch: How Weta Workshop Made Ghost In The Shell's Thermoptic Suit

When Major goes invisible, this is what she wears. IRL, the whole thing is made from silicone, and it may just be the first of it's kind.

One of the most interesting new techniques used on the thermoptic suit involved CNC milling machines — usually used to cut designs into hard materials like metal or wood — which etched the fine details onto the plasticine model that the mould was later taken from.

Techniques like 3D printing are constantly expanding what’s possible in the realm of practical effects, and this was especially evident in some of the work done on Ghost in the Shell. Print quality is constantly improving, and new filament materials mean more and more different effects are possible through 3D printing. These days Weta uses 3D printers for everything from mocking up quick prototypes to creating finished pieces.

One interesting application mentioned by makeup artist Jason Docherty was the potential to use 3D printing to duplicate moulds for prosthetic makeup pieces which, so far, have been almost impossible to exactly replicate. While these moulds are usually quite durable and last a long time, duplicated would come in handy when making a prosthetic-heavy film like The Hobbit. When each dwarf actor required a new facial prosthetic made for each day of shooting, the ability to run them in multiple moulds at once could have been invaluable.

Of course among all these high-tech processes, sometimes it’s the simplest things that can present a challenge — one of the hardest tasks Gillies’ team encountered working on Ghost in the Shell was just attempting to paint the perfect circles on the geisha’s masks. Go figure.

Hayley traveled to Wellington as a guest of Paramount.