The Anteater's Tongue Is An Evolutionary Masterpiece 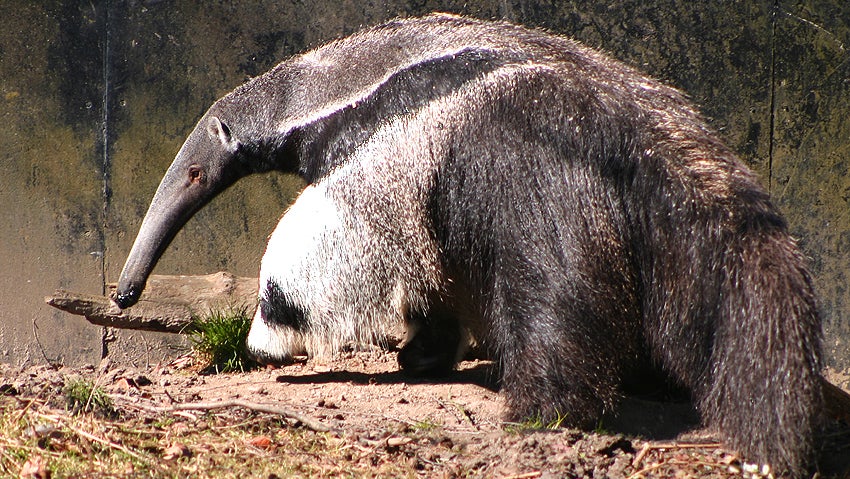 Anteaters are very good animals. They somehow pull off the whole "slurp up ants with their sticky, noodly, bendy straw tongues" so confidently you forget how weird that is. And scientists agree that, yes, anteater tongues are weird. But they're also understudied.

This is such a good animal!! (Image: Malene Thyssen/Wikimedia Commons)

A team of Brazilian researchers are therefore spending their time trying to understand these slimy ant-licking noodlemouths. How did anteaters end up with such silly appendages, while their close relatives like sloths and armadillos feature, well, more normal tongues? The answer is, of course, evolutionary adaptations to their ant-filled diets.

"All musculature involved in [chewing] is strongly related to the feeding habits of these organisms," study author Daniel Casali at the Instituto de Ciencias Biologicas of the Universidade Federal de Minas Gerais in Brazil told Gizmodo. "Armadillos are generalists, some specialize in insects and some are more specialised in eating ants and termites," which called being myrmecophagous. "Anteaters are almost exclusively myrmecophagous. We think the selective pressures in this diet led to a gradual stretching of the tongue."

A stretching of the tongue whose incredible results look like this:

The author's latest study involved sampling 29 anteater specimens that had died in veterinary hospitals, or were collected as roadkill, from three species: the giant anteater, the southern tamandua, and the silky anteater. After examining the tongues in various ways and under a microscope, they observed an oval-shaped cross section of a long, narrow tongue. The part furthest from the skull was covered in bumpy protrusions, and the front part is rounded and smooth. The southern tamandua and the giant anteater's tongues had conical tips that made them look like, well, penises (the silky anteater did not). 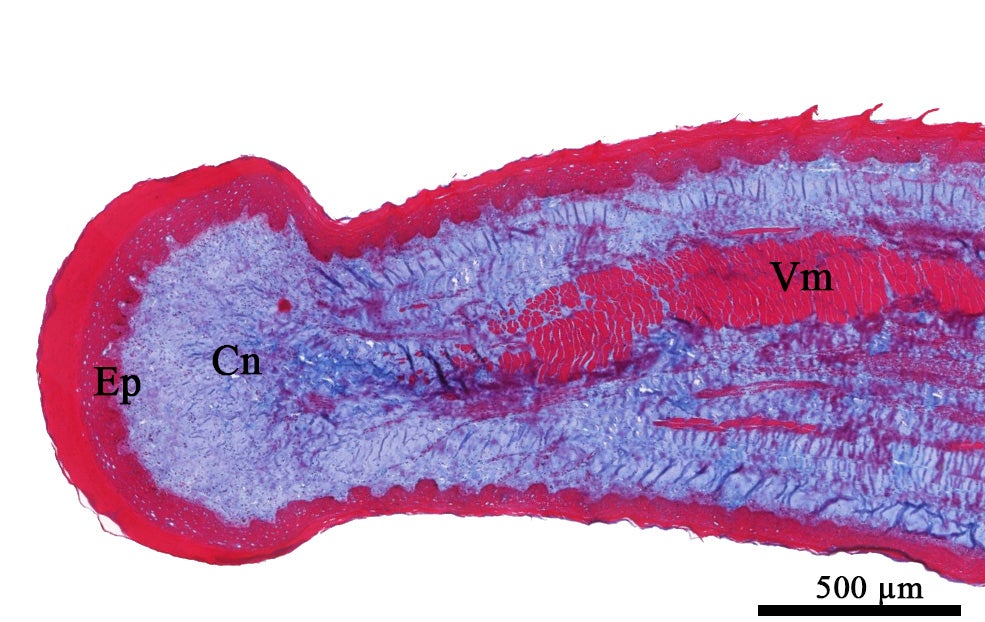 The tip of the Southern Anteater's tongue (Image: Daniel Casali)

On top of that, the muscular structure of the tongue implied that it probably stretches a lot, according to the paper published recently in the Journal of Morphology. This suggests that the muscles are specifically designed to maximise the organ's speed and stretchiness to fit their feeding behaviour.

And of course, the whole thing is covered in sticky mucous. But there aren't a lot of taste buds, as observed in this and is past studies — after all, anteaters are mainly eating ants and, accidentally, dirt. "It is, therefore, plausible to speculate that a tongue weakly adapted to taste function may be adaptive for their feeding habits," the authors write in the paper.

But separate from the tongue, Casali is most impressed with the anteater's tubular skull, which is specialised for the skinny tongue's movement. In fact, the whole animal seems to be adapted for its bug-eating purpose, ripping up ant nests with its strong arms, punching holes with its claws, and sticking its spaghetti tongue into the holes it made. The tongue even has horns that can help grab ants and termites while the anteater explores nests. 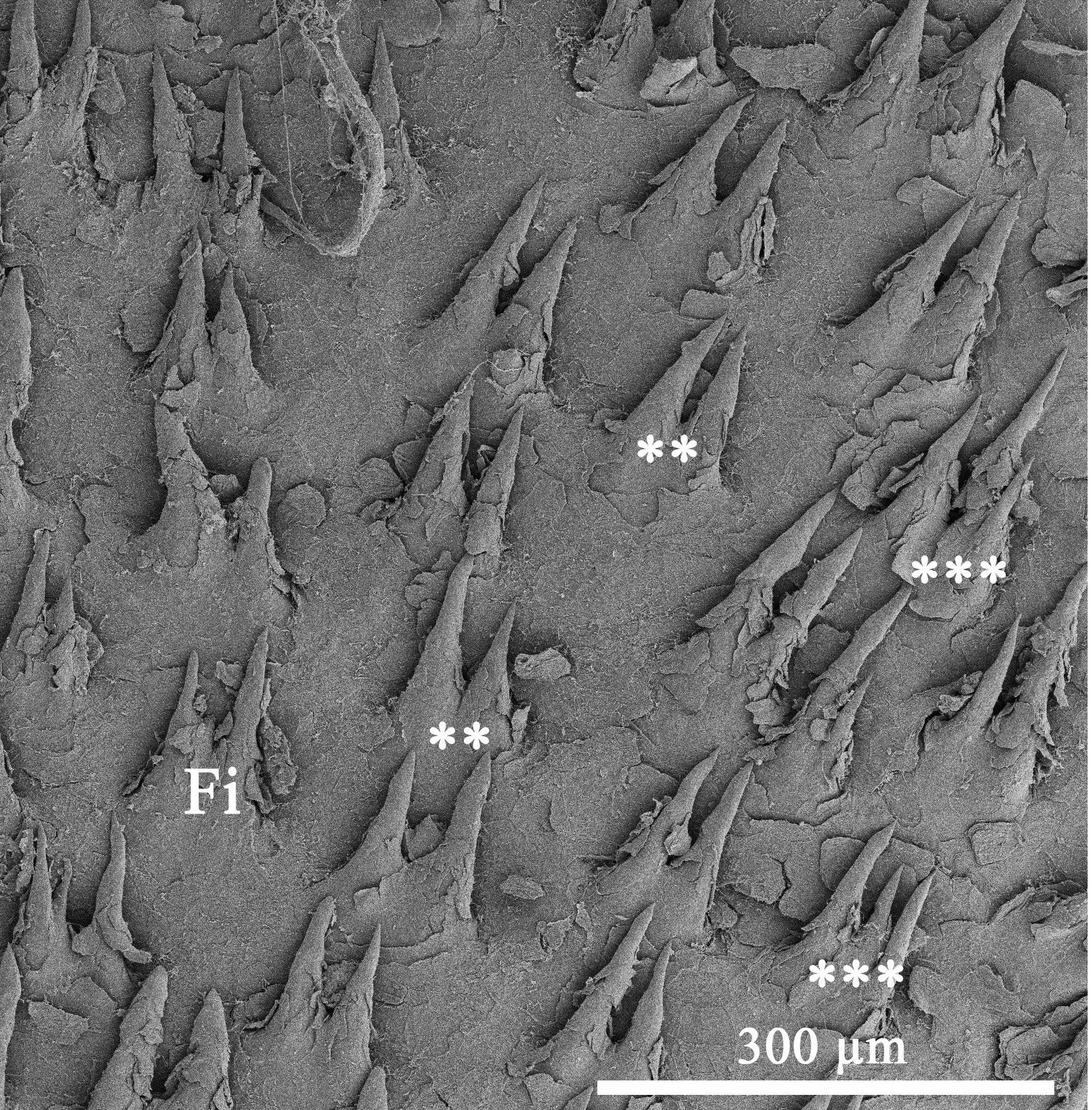 Casali also pointed out that the distantly related pangolin evolved a completely different tongue of the same shape. "The same organs in two different organisms provide a similar structure externally," he told Gizmodo. "But when we look into the details, they're very different and we see this evolutionary convergence. They achieve the same end product through different pathways."